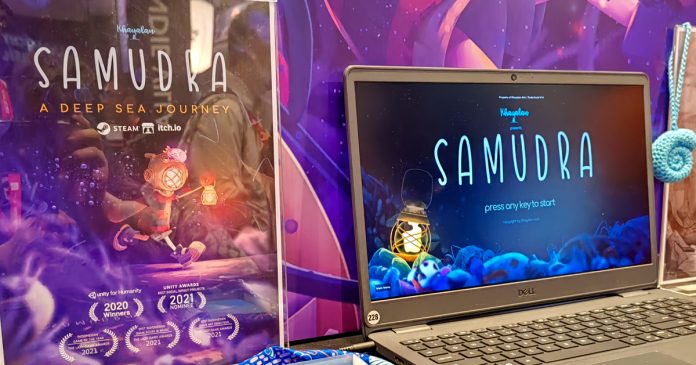 While initially planning to have sprawling game booths to showcase upcoming titles on the convention area for Gamescom Asia 2022, the conference scaled back and instead placed the highlight (once again) internally towards the various game developers, publishers and accompanying suppliers. But, that doesn’t mean you can’t find any video games to try and play over at Suntec Convention Center Singapore where the 3-day show was held. 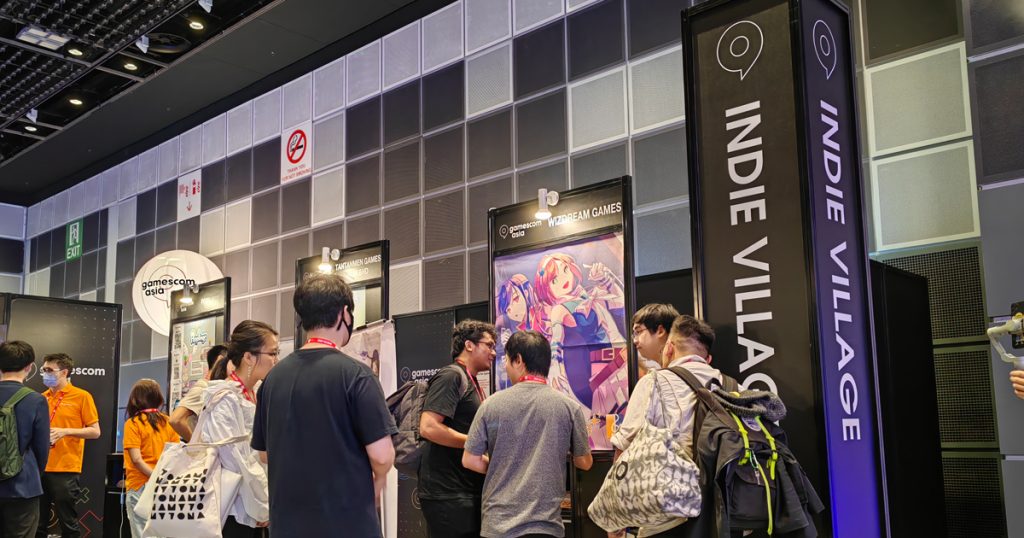 Most (if not all) of the games that are heavily showcased are from Indie developers and while there were several bigger pavilions that housed various indie titles from different countries (like the German, Swedish and Singapore Pavilions), what caught our attention are those found over at the mixed Indie Village consisting of mostly of Southeast Asian titles.

Here are some of our favorite picks from the area:

First on the list is SAMUDRA. An Indonesian-lead atmospheric puzzle platformer, SAMUDRA leans heavily to similar-approached indie titles like Journey, or Abzu wherein there’s no clear-cut enemy boss, and hardly any dialogue at all.

Samudra is a Sanskrit term that means Ocean (or the gathering together of water) and the premise of the world is simple — if not a tad bit apocalyptic. Sea levels rose and the world is now submerged in water. You play as a young boy trying to resurface (to where that is, I have no idea yet) and you guide him along his journey throughout a very polluted seabed. 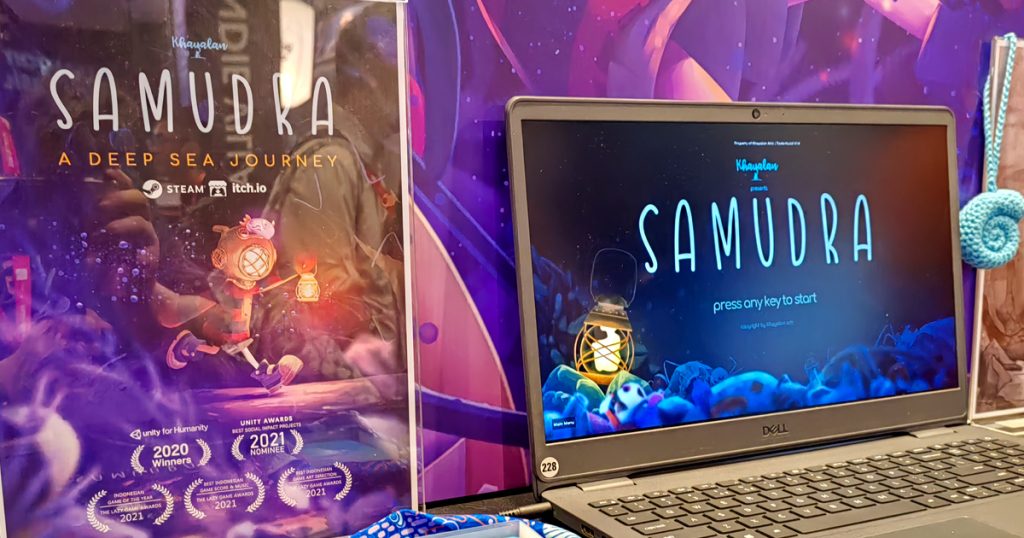 Along the way, you encounter a bit of puzzles and simple menial tasks to render. Gameplay wise, there’s really not much into it. Narratively, though, the game employs a polished production level with moving soundtrack and a pretty good sound design to help you keep engaged and immersed in the world. In a word, the game looks pretty. 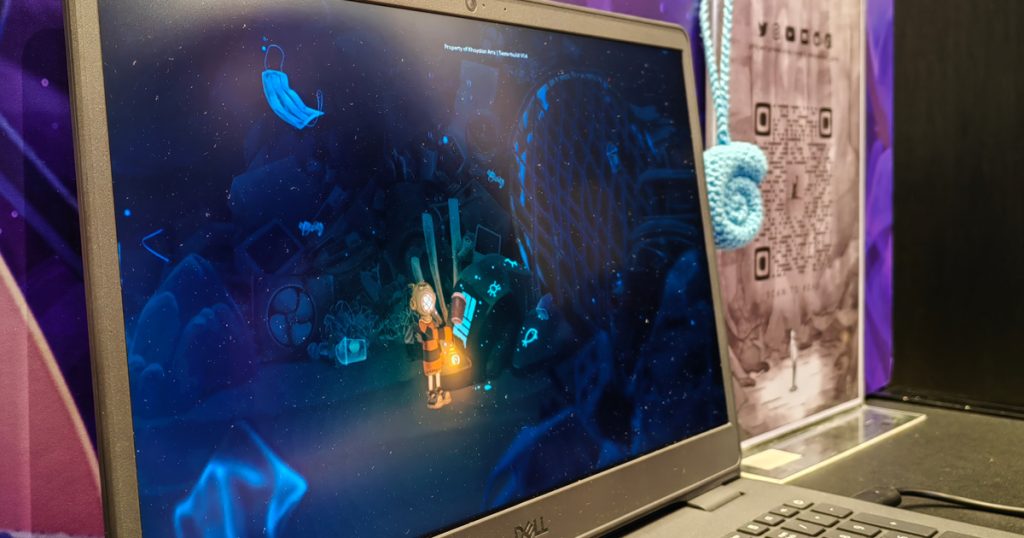 If you’re not a fan of games like Journey, then you’ll definitely not like this. However, if you do want to jump in on a game experience that’s overly chill and slightly cathartic, then you may want to give Samudra a chance. It’s currently on SALE at Steam. The game also garnered several local and international awards including UNITY’s Unity for Humanity Grant.

If you circle around the Indie Village area of Gamescom, it’s impossible for you not to see Spirit Mancer as the game has a larger booth area than it’s compatriots. This 2D side-scrolling action hack and slash is part Megaman and part Pokemon / Jojo’s Bizarre Adventure (?) in all it’s chaotically good glory. 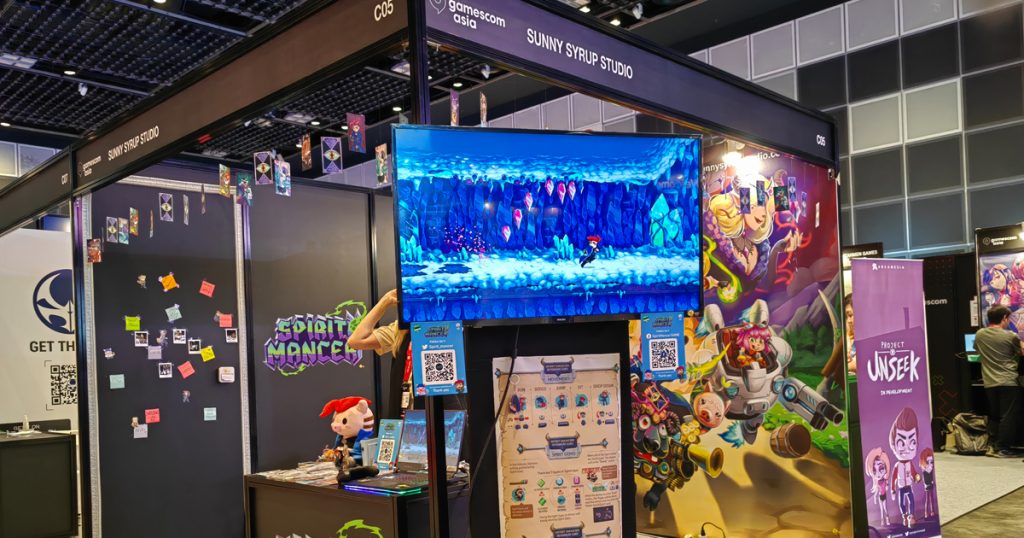 Spirit Mancer’s fast-paced combo-chaining system, keeps battles fresh as well as the integration of Spirit Cards summons to help you in your battle. Think of the Spirt Cards as your Stand (ala Jojo) but you also get a variety of those by tapping into the various enemies you face.

How that works is by battling various enemy types, you can, if you choose, acquire the spirit of your enemies and turn them into Spirit Cards. These cards can be used during combat and will have a timer system as well and you can swap Spirit Cards at certain points within the game. So yes, there’s a deck-building component as well. 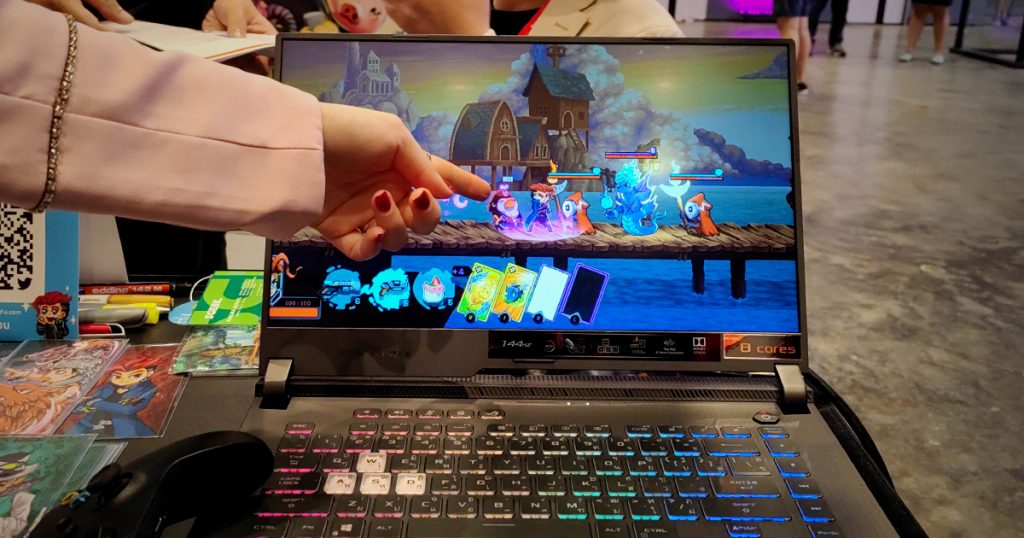 And while that seems like there’s a lot of various gaming genre components mashed up into Spirit Mancer, the guys at Sunny Syrup Studio managed to make the entire thing work. What should have been a hot-mess, is now a chaotic fun, button-mashing, deck-building, action hack and slash game. 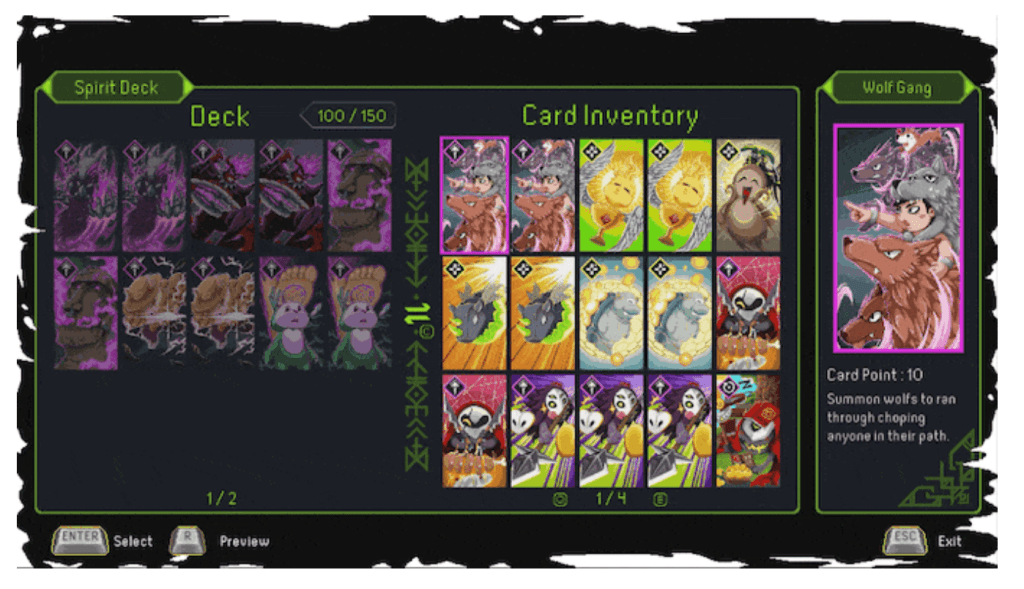 There were more nuances to the gameplay and we only had a few minutes with the title, but we’re super excited to try this out when the game comes out sometime later next year.  If this speaks to you, you can play the Pre-Alpha demo here.

They’re also currently on kickstarter…so you if want to give them some love, you know what to do.

Perhaps the most polished indie title at Mixed Indie Arena, Rift of the Necromancer is the latest installment of the Necrodancer series from Brace Yourselves Game — a Canada-based Independent Game Developer. 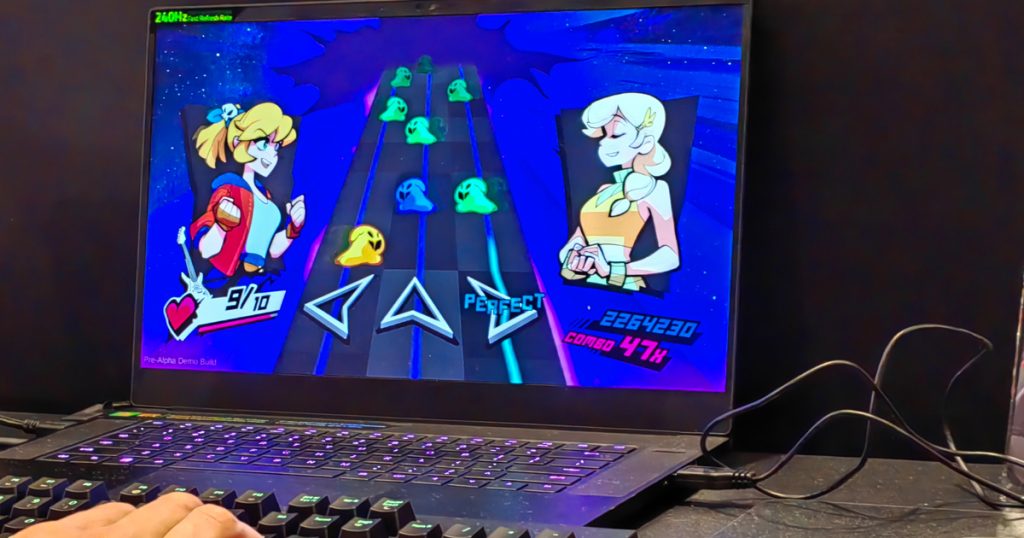 This isn’t their first time bending the rhythm game genre by infusing action elements to it as they did so with Crypt of the Necrodancer and Cadence of Hyrule, a rhythmic battle game set in the world of Legend of Zelda. But while those games lean more towards traditional JRPG/ Legend of Zelda orientation, Rift of the Necrodancer gives a stronger nod to more traditional rhythm games in general. 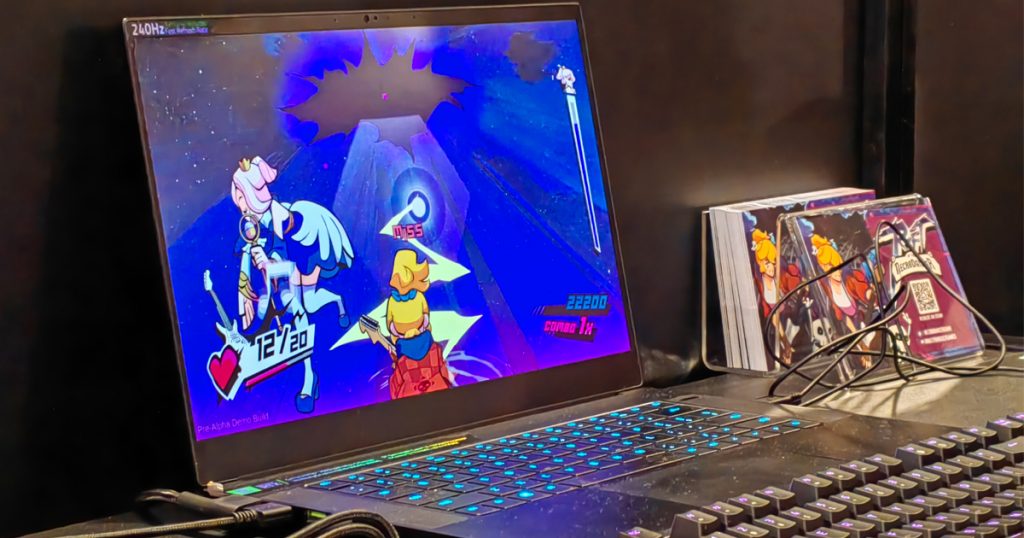 Of course, this being Brace Yourselves Game, this rhythm game comes with a few twists of its own. Part Rockband, part Punch Out, you’ll need to really hone in and listen to the audio cues and rhythm of the music to progress through the game. There’s even a mini game of sorts where Cadence participates in a yoga class where, once again, musical rhythm is the key to get through the session unscathed.

We couldn’t end this feature without giving special mentions to a couple of other games we saw within the Indie Village area. While they may not have the same spectacle and polish as the titles mentioned above, these ones just tickled our sensibilities enough to warrant a place here.

I mean…it’s the name really. When I introduced myself, I was wearing an UnGeek shirt and they were like “OH! UnGeek…Unseek.” Eh? Eh? Okay, it could just really be me, but this 2D asymetrical multiplayer game has its charm.

Project: Unseek is a 2 v 6 multiplayer horror-survival game but because of the treatment and the artistic choices, the horror elements are really just flavor. There’s nothing absolutely scary about the game — but I can see it having its own fun community especially in the casual gaming corner. It could also be a choice for streaming groups to try out as well.

The game is still in the pre-alpha stages so controls were still a bit clunky and art could use a lot more polish but given time, it could turn into a tidbit of a gem.

When it ain’t broke, don’t fix it. And that’s pretty much what the guys at WizDream Games did for SparkLine. Sparkline is an honest-to-goodness rhythm tap game on your mobile phones or tablets. The genius behind SparkLine is the additional movesets that may not be available in traditional tap games.

Tap, hold, zing your way through your phone with addictingly great music and anime-inspired imagery with SparkLine. According to the devs, it’s a game that’s easy to pickup but hard to master and it’s the difficulty that makes this more addicting — even for non tap players like myself.

Game is still currently in dev but again, targeting 2023 for release.

These are but a handful of games that we saw over at Gamescom Asia 2022. And while the convention has been over for about a week now, we’re still recollecting all our wonderful experiences during that 3 days gaming conference. We can’t wait for Gamescom Asia 2023 as we hear it’s still going to be held at Singapore and we hope for bigger booths, more consumer-facing showcases and a lot more gaming goodness by then!

- Advertisement -
Previous article
Doraemon Story of Seasons: Friends of the Great Kingdom Hands-On | Time to Relax
Next article
Check out these eight must-watch Disney shows on Disney+ PH this November