Bandai Namco gave fans a new look at Alabasta in this new One Piece Odyssey trailer! 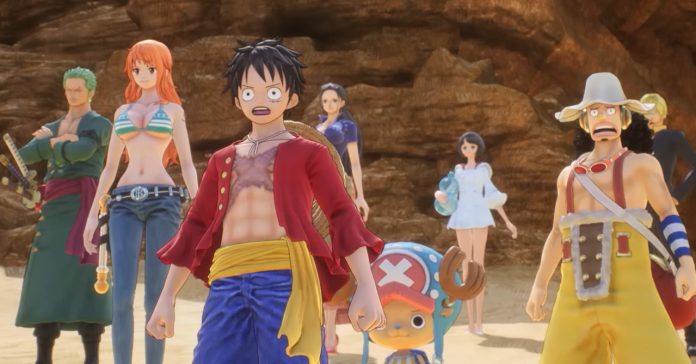 Ahead of the game’s release this January, Bandai Namco treated everyone to a new gameplay trailer for One Piece Odyssey that’s set in the fan-favorite location of Alabasta.

While this isn’t the first time that we’ve been shown Alabasta in the game (as it was unveiled in the recent New York Comic-Con trailer), this trailer does give us an extended look at its gameplay.

The new trailer shows the Straw Hat pirates visiting Alabasta (possibly the city of Alubarna). There, players can switch between which Straw Hat they want to control outside combat. Each character is shown to have unique non-combat skills.

For instance, Usopp can shoot certain objects to unlock a path or reward. Luffy can also do the same as he is shown using his Gomu Gomu no Mi stretching ability in the trailer to reach a ledge that contains some treasure. This specific part of the trailer is set outside the city but still in Alabasta.

The game’s combat was also shown off here. In the game’s turn-based RPG combat system, players can use a team of four Straw Hat pirates (sans Franky and Brook it seems in this part of the game as they weren’t part of the crew yet in the Alabasta Saga) to fight against enemies. At first glance, the visuals and some of the combat mechanics are reminiscent to something like Persona or an older Final Fantasy title. This should make it accessible to RPG fans and not just for One Piece fans.

Speaking of fans, Alabasta is the setting of the Alabasta Saga which is considered by many fans to be one of the best. Given this, the fact that Alabasta is a setting in Odyssey should be a treat for fans of the series.

If you haven’t been keeping up with the news, you might be wondering why Alabasta is in the game. After all, it is set primarily in the new island of Waford which is located in the New World. Plus, this happens post-timeskip, so it doesn’t make much sense for Luffy and his crew to make the journey back.

Though it is revealed that the game’s Alabasta is just a memory and not the real island. Given this, it’ll be interesting to see how that will fit with the game’s story, not to mention that there might be more memories that are set in other fan-favorite locations.

In case you’re unfamiliar, One Piece Odyssey is an upcoming turn-based RPG where Luffy and the Straw Hat crew must find a way out of the mysterious island of Waford, an island where pirates have never escaped from alive.

Want to know more about the game? Check out our interview with One Piece Odyssey producer, Katsuaki Tsuzuki here:

Interview: One Piece Odyssey Producer Katsuaki Tsuzuki on how Oda-sensei helped bring the game to life

- Advertisement -
Previous article
Crisis Core: Final Fantasy 7 Reunion Hands-On | Not Just for Fans of the Original
Next article
Doraemon Story of Seasons: Friends of the Great Kingdom gets a new trailer and DLC reveal at Thailand Game Show 2022