Don-chan is back for an encore! 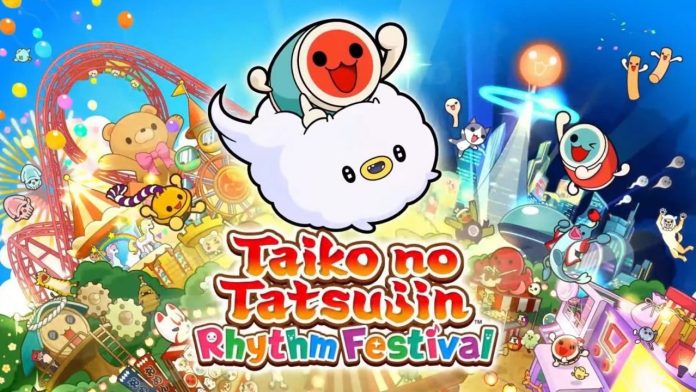 As one of the premier musical rhythm games since the early 2000s, Taiko No Tatsujin is a game that revolves around the beating of the drum the way Guitar Hero pulls the heartstrings of your soul, or goes footloose on Just Dance. Taiko no Tatsujin: Rhythm Festival, the latest iteration of the drum beat game, has been released on the Nintendo Switch, and one of the nice options now for the game is the option to dress up the game’s mascot, Don-chan in Nintendo-related accessories, not limited to Mario and Luigi hats and Kirby piggybacking among others.

Unlike some of its fellow rhythm games, Taiko No Tatsujin does not require you to own the game instrument it represents. The game has motion control, button, or touch screen options, on top of going out and buying one of the drums. 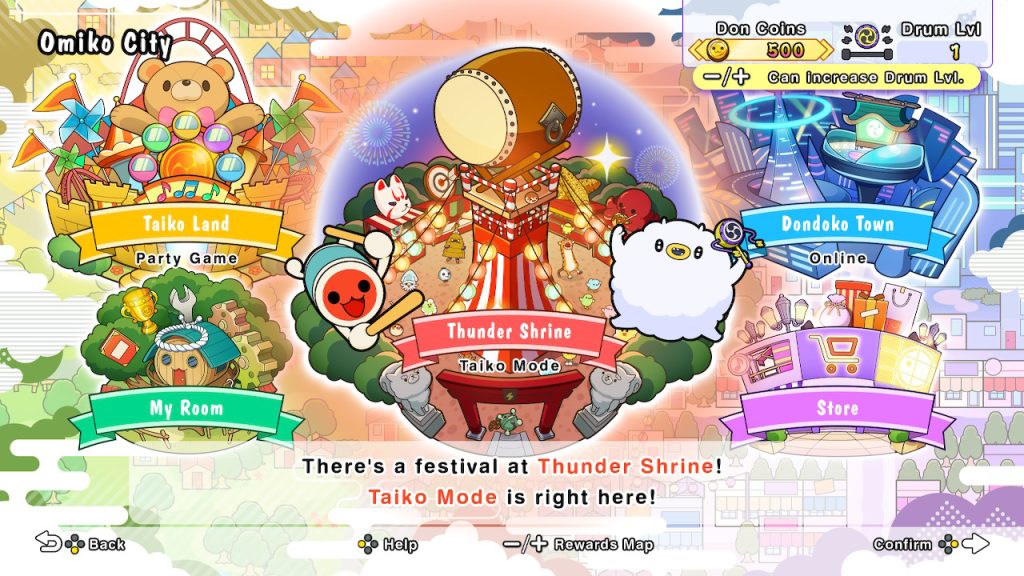 Taiko No Tatsujin: Rhythm Festival features the same gameplay as the previous Taiko releases. Compared to some of its fellow peers in the rhythm game genre that require multiple inputs, in Taiko no Tatsujin, there are only two notes to hit. You have your red or blue as the only two main notes. I mean there is the small red, big red, small blue, and big blue but it is practically just two notes.

You are probably thinking “why just two notes from a drum instrument game?”, well it is because the game, although a bit of a niche, is focused on the traditional Japanese “wadaiko” drum used in festivals, and theater.

There are plenty of great songs to hit the beats, with the base game having plenty of songs to choose from and play with, and having four difficulties to choose from. But not to worry because there is a practice area you can fiddle around with. For those who played the previous Taiko game, Taiko no Tatsujin: Drum ‘n’ Fun, and happen to have a save file for it, sadly you would not be able to transfer your accumulated song list into Rhythm Festival, and instead, you’ll get some extra songs and some additional customizations.

Rhythm Festival has its subscription service which is its own music pass with hundreds of tracks available and ready for download. It is just that you have to download them one by one. There is no way to simultaneously download them nor does the system have some form of queue where it can remember your selections and download them automatically sequentially one after another.

What I really like about Taiko No Tatsujin: Rhythm Festival is the Toy War. It’s a musical battle between characters or other players where you use toys with certain abilities or attacks to mess up your opponent. This works by building up your meter by hitting your notes. Then when you build up the meter you spawn your toy and whoever has the most of them wins. Before the battle, you build up your toy loadout. Depending on the different abilities you chose can affect the battlefield from covering hit notes in the sequence timeline to adding fake notes among others that mess up the accuracy and combos. 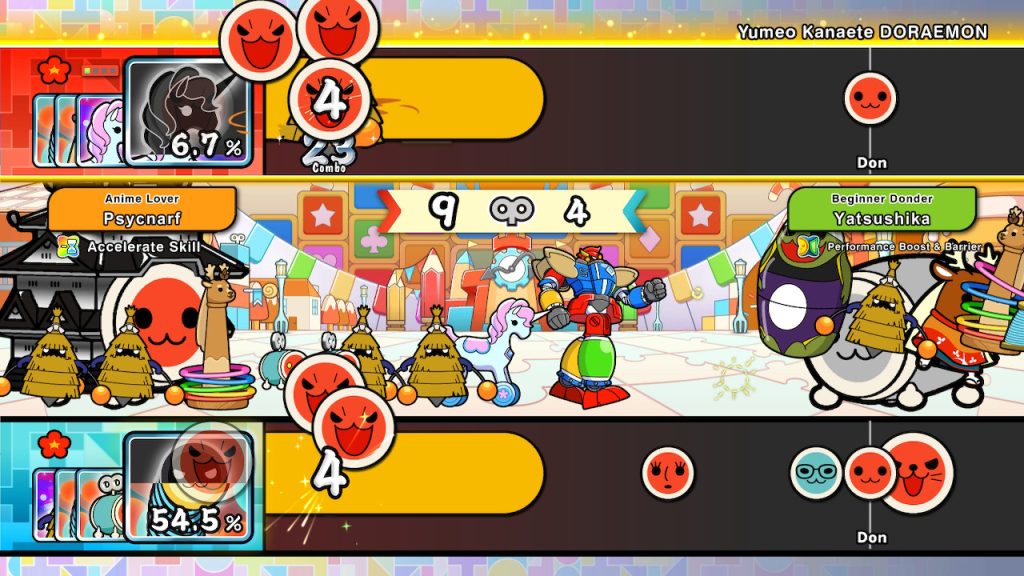 As you play the game and gain more experience and coins, you’ll be able to unlock and buy more stuff. Leveling up progresses the story, adds items in shops, and sometimes coins.  At the Rhythm Festival store, from cute accessories to your avatar Don-chan to a variety of toys, you’ll find costumes and/or accessories for Don-Chan to wear in each of your music battles. Another interesting item to buy is the different musical instruments at the store, where if you bought and have them, it ever so slightly changes the sound of the drum when you hit the note. Although these various outfits don’t provide any bonuses it does make Don-chan more visually appealing. 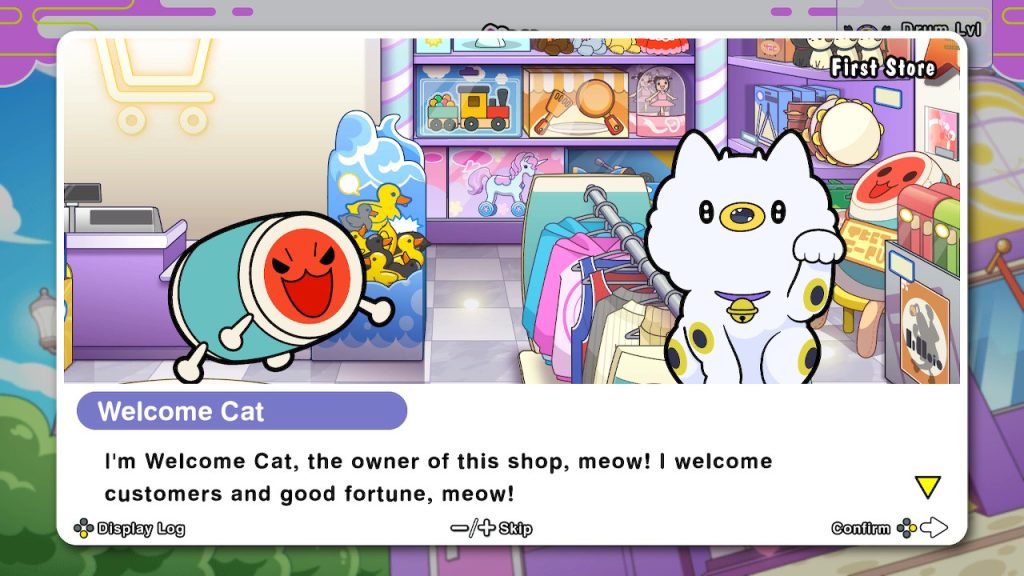 Another game mode I like outside the regular Taiko mode is the co-op mode of the game. The mode is entitled “DON-chan Band,” and if you have a bunch of friends or family with you, it is definitely a fun time as you and your buddies strike up the band. Working together with your mates is the key to this. This mode can have you teaming up with three other players which can be a combination of humans or AI characters as you perform a concert with your squad. Each one of you will have different roles as your team works together to achieve your goal. 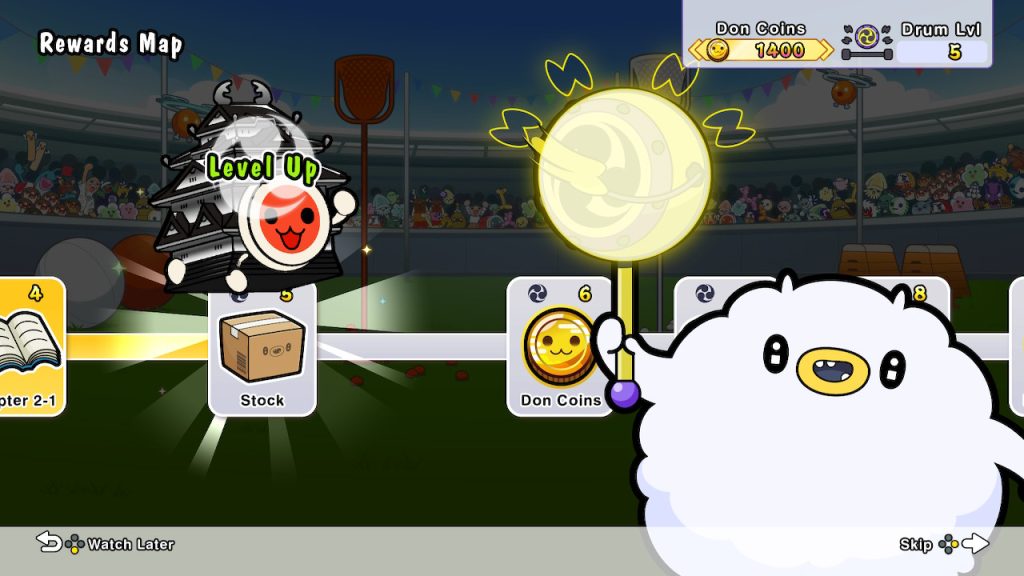 In terms of in-game base songs, I especially love the anime section of the track groups. You have your Neon Genesis Evangelion Intro, along with Attack on Titans, Demon Slayer, Jujutsu Kaisen and so much more. And as I said earlier, there are for levels of difficulties that can give you a little more challenge to just plain “I’m gonna throw my controller to the wall because it is frustrating as hell!”.

The music selection, of course, is not limited to weeb tunes alone for the otakus. There are popular music titles in-game as well from popular K-pop and J-pop artists to classical music, and original gaming music among others.

In terms of visuals and overall look and feel it is pretty much the same as the previous Taiko game. It still has its cutesy vibrant, happy, bright, and cheerful ambiance.

Taiko no Tatsujin: Rhythm Festival is an enjoyable experience that, for a musical game, hits its mark on every note. The Toy modes, whether it is through VS or the Story mode, is for me the highlight of the game. Unlike buying stuff from the store for aesthetic purposes, the toys having unique abilities and being able to use them in a music battle most especially in a player versus player is every bit as satisfying.

I am not particularly a fan of the game having a subscription model for the additional music tracks, but with all the unlockables you get playing the game and its various modes, it gets a decent score for its replayability for a rhythm game.

Taiko No Tatsujin: Rhythm Festival was reviewed on Nintendo Switch via a copy provided by the publisher.

Taiko no Tatsujin: Rhythm Festival has the same core gameplay as other Taiko titles, but it continues to be a fun rhythm game that's easy to learn and hard to master (especially in the higher difficulties). Though the highlight of this new release is the various game modes that it has, including the story mode. Taiko No Tatsujin: Rhythm Festival Review | Drumming-up an Encore