Tower of Fantasy details the Vera update ahead of launch

The new Vera expansion is coming out on October 20! 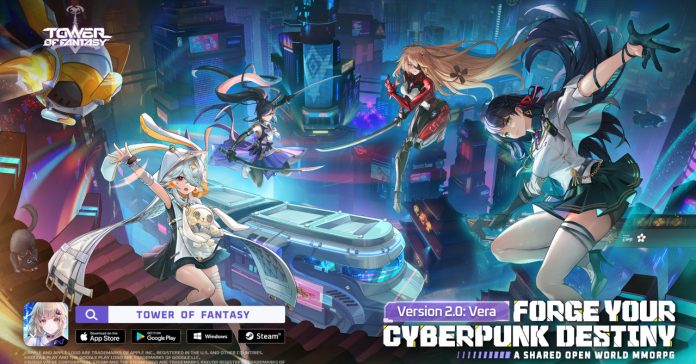 Specifically, a special event was streamed on YouTube which gave fans an in-depth look at the Vera update. These include a new trailer for the mysterious character Ruby that highlighted her Spark weapon and abilities.

The Vera expansion’s two distinct environments were also previewed in the stream, including the wilderness of the Desert Gobby and the cyberpunk city of Mirroria.

In these areas, players will get to access raids, missions, events, instances, monsters, and bosses. There will also be vehicles and weapons that will be introduced.

Along with these reveals, players were also able to acquire redemption codes for the game during the livestream. These redemption codes offered players rewards, including up to 70 draws and more if players meet certain conditions and participate in in-game events.

In case you missed it, “Vera” is the first major update for Tower of Fantasy that will be available for free on October 20 via the the official site, as well as on the App Store and Google Play. Plus, members of the Steam community will alos be able to download and play the full game along with the new Vera expansion on the same day.

As for the game itself, Tower of Fantasy is Hotta Studio and Tencent’s open-world RPG that was released last August.

For more info on the visit the game’s official site.