Uncharted finally comes to PC, but is it the definitive version? 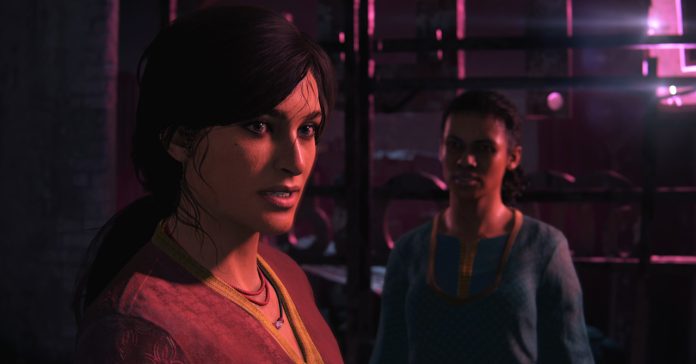 Earlier this year, PlayStation and Naughty Dog released Uncharted: Legacy of Thieves on the PS5, an enhanced re-release of Uncharted 4: A Thief’s End and The Lost Legacy with lots of enhancements that aim to take advantage of the PS5’s hardware. Now, the game is finally releasing on PC, giving players that don’t have a PlayStation console a chance to experience Naughty Dog’s iconic series.

The PC version of the collection is identical to the PS5 version in terms of content, though it does come with even more enhancements on the technical side. For instance, there are various quality-of-life improvements aimed specifically at the PC experience, including a new UI, scale sliders, and a bevy of graphics settings to tweak.

We had high hopes for this game before we got the code given the quality of PlayStation’s recent PC releases (including God of War and Spider-Man). Though we do remember how Horizon Zero Dawn’s PC release wasn’t as smooth for everyone. So, does the PC version also deliver? Here’s our Uncharted: Legacy of Thieves Collection review for PC! 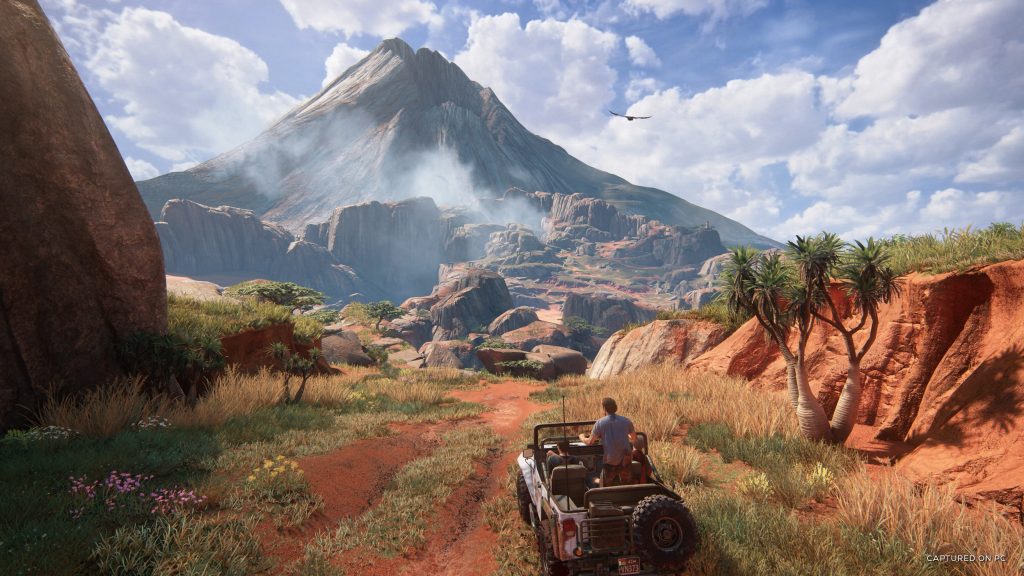 This is now the third time that I’m playing Uncharted 4 and Uncharted: The Lost Legacy given that I first played both titles a few years ago, and then I replayed them earlier this year to review their PS5 release. That’s not even counting the times I replayed certain sections of the game

Given that I’ve already explained what I think of them gameplay and story-wise in my previous review, I won’t go in-depth on gameplay and story too much. If you want a more detailed explanation of how the games hold up, you can check out the PS5 version review we released back in January.

Going back to the PC version, I can still safely say that after playing through the games another time, they still hold up incredibly well, enough that these games are still the standard when it comes to cinematic action games. 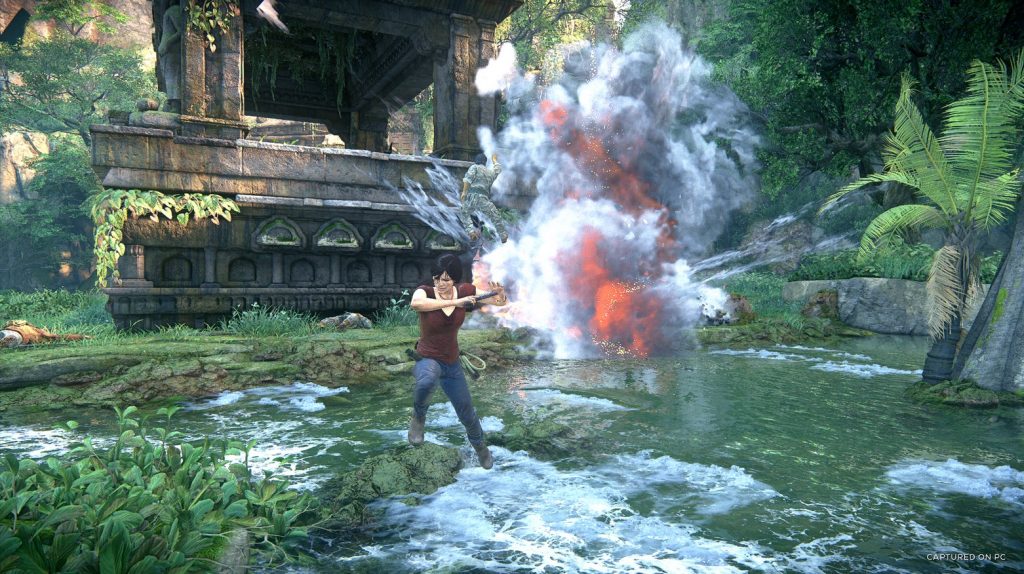 In the triple-A gaming space, there are lots of games that aim to be “cinematic” experiences with lots of big action set pieces that feel like playable blockbuster movies. Arguably, it is Naughty Dog that started this trend with the Uncharted series, and so far, there aren’t any titles that have been able to top the series.

The two games in this collection stand out, at least in my opinion, as the best when it comes to setpieces. While I would still say that Uncharted 2 is my favorite in the series, these two have Among Thieves beat when it comes to the epic scale of the action sequences. This is thanks in large part to how impressive the visuals are, especially in the PC version.

If you’re playing this on PC, chances are that this is the first time that you’re playing an Uncharted game. In this case, you won’t have to worry story-wise as you don’t need to play any of the previous titles in the series to understand and enjoy the story (which are among the best written in the series in my opinion). Though when it comes to appreciating it fully, starting with these may not give the best experience.

Gameplay-wise, these are the best Uncharted titles as the first three games do show their age (especially in certain boss fights or other sequences). But when it comes to stories, both games work best if you’re already familiar with the characters. Uncharted 4 in particular features a story that serves as an emotional conclusion to Drake’s story. While the impact is still there, it won’t be as strong compared to if you’ve experienced the first three games.

That’s not to say that these aren’t great introductions to the series. Uncharted 4 was actually the first game in the series, and I enjoyed playing it. It’s just that I was only able to appreciate it fully after beating the first three games.

Even though they’re a couple of years old now, A Thief’s End and The Lost Legacy still hold up well in terms of gameplay and story. The only reservation is that starting with them won’t give you the most impact story-wise. Here’s hoping that Naughty Dog also works on releasing Uncharted 1-3 on PC soon. 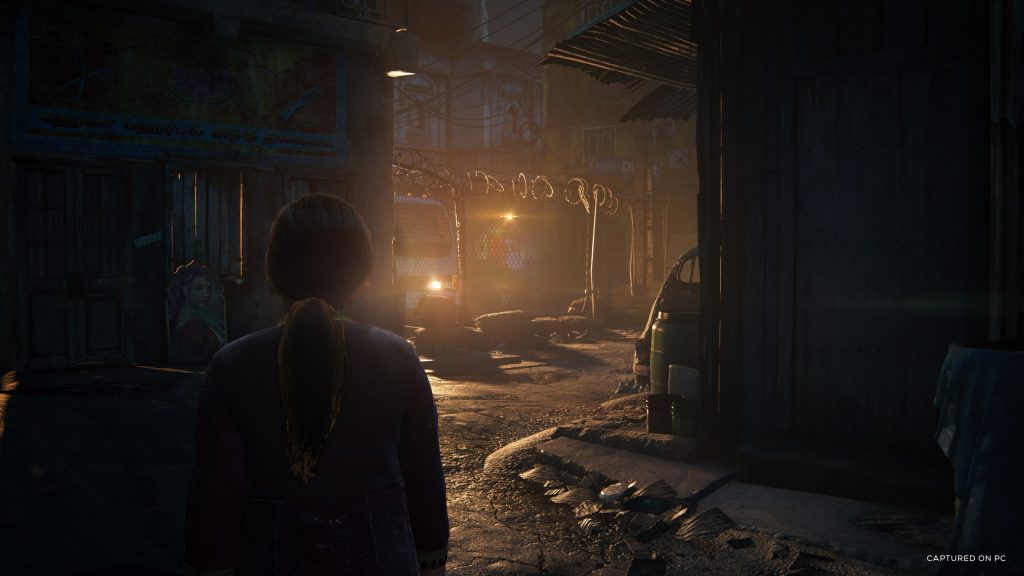 Now let’s talk performance. On the PlayStation Blog, Naughty Dog shared the PC system requirements for the game. To play it at the Ultra graphics setting, you would need a beefy PC. Though you should still play it with a more modest setup, provided it meets the system requirements. You do have to note that the game requires 128GB of storage space which is quite large for a single-play game (well, a collection of games).

On the RTX 3080-equipped gaming PC, the Legacy of Thieves collection ran well with no issues at the higher graphics setting. If you’re on a beefy PC such as this, you’ll have a great time playing the game as it’s responsive and has impressive graphics. In fact, thanks to the ability to tweak graphics settings, you can get the game to look even better than its PS5 version. In many ways, this is the definitive version of the game as you won’t even have to sacrifice the controller-specific features as the game supports haptic feedback and adaptive triggers if you have a DualSense controller (though you will need to play in wired mode for these features to work).

As for the RTX 3050-equipped laptop, the game ran well. While you won’t be able to run the game at the highest settings, 50-60FPS on Medium is doable. Depending on how you tweak the graphics settings, you can get the game to run at a more stable 60FPS without many framerate drops.

Finally, the game also ran quite smoothly on the GTX 1650 laptop. Even at 1080p and at the Low graphics setting, the game ran at 30-40 FPS without a lot of extreme framerate drops. If you want a more stable experience on a lower-end rig, the game also has a 30 FPS cap option which is a nice touch.

Our gameplay experience wasn’t perfect though, at least on the two laptops that we tried the game on. There were a couple of times that we got stuck on the game’s loading screen at the beginning of the game, necessitating a restart of the game. There were also times when the game crashed, though this didn’t really happen while playing on the RTX 3080 rig. Now, we’re unsure if this is down to the laptops that we tried or if it’s with the game itself. But it’s still worth noting that you may want a beefy rig to best enjoy this game, at least at launch.

Also, a quick side note. The Legacy of Thieves Collection features AMD FSR2 to boost framerates while still having a high resolution. This is basically AMD’s answer to NVIDIA DLSS, but it works on any card, even NVIDIA GPUs. This is useful if you want to up the game’s resolution without taking too big a hit on performance. Though if you’re playing on a 1080p monitor, you may want to turn it off as it doesn’t look sharp at 1080p, even using the Quality mode.

It’s also worth mentioning that the game’s PC release comes with a decent amount of graphics settings that you can tweak. This is in line with other PlayStation PC game releases which is always welcome for gamers on PC. After all, some PC ports of console games only have barebones graphics settings, meaning you can’t tweak the graphics/performance to your liking which is not ideal if you are experiencing some issues.

On top of these, the game has ultrawide monitor support which is great for gamers who have a sick gaming setup.

The Uncharted: Legacy of Thieves Collection features two games that still hold up well to this day as some of the best cinematic action games, especially if you’re looking for a game that’s like a playable blockbuster movie.

While they may not be the absolute best place to start the series given the emotional impact of Uncharted 4’s story won’t be as strong if you haven’t played the other games yet, these are still great entry points to the series.

On top of these, the game’s PC performance is great, whether you’re on a powerful gaming rig or a more modest (but still fairly modern) setup, though there were some hiccups in our test.

Still, the Legacy of Thieves Collection on PC is a solid port of these two Uncharted games, provided that some of the issues that we encountered could be fixed.

This review was made via a PC game code provided by the publisher.