Sonic Frontiers Review | Building up and losing its momentum

Sonic Frontiers has a lot of promise, but it falls flat at some points. 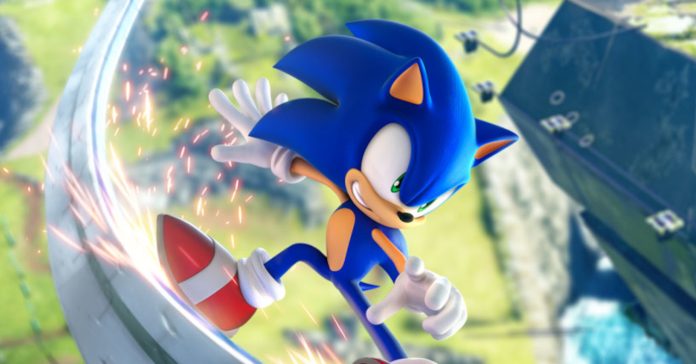 Sonic Frontiers is the latest entry that aims to shake the series’ formula up, and a much-needed one at that. It’s no secret that the Sonic franchise had seen better days since its retro days with the blue hedgehog struggling to find proper momentum when it transitioned to 3D games. Despite its iconic status, Sonic only really found success in the modern market through remasters of its old games.

This new Sonic game has a brand new open-world setting that lets the player explore different worlds that are filled with a bunch of activities to complete. With that comes a number of changes that may have been too much for its own good.

The game feels more like a buffet rather than a gourmet meal. There are lots of offerings, some are decent, some are bad, and there are others that I’d rather just ignore. 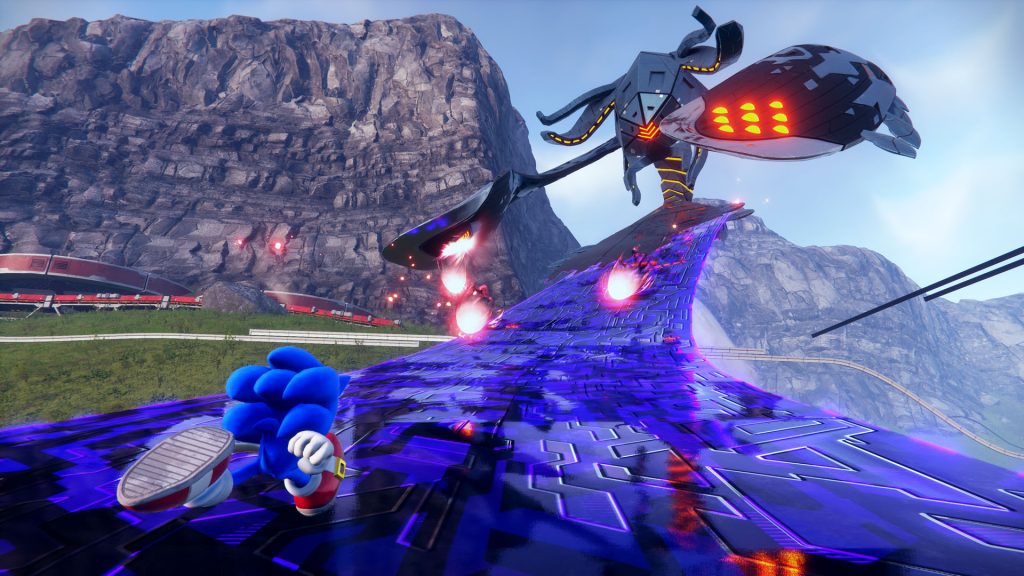 When I first heard about the plan to make the next Sonic game an open-world experience, I was concerned about how the developers would organically tie in the franchise’s mechanics into a large space that makes sense.

As much as I love the 2D games, I always felt like Sonic’s momentum would constantly be interrupted by obstacles that only give you split seconds to react. To be fair, Sonic levels are meant to be mastered through repetition, and once you get that perfect run with an S-tier rating, it feels very satisfying. But sometimes, I just want to turn my brain off and watch Sonic go zoom. Which is exactly what the open worlds of Frontier provide.

The large open spaces provide a lot of opportunities to just run around and play as you see fit. Each area is filled with different activities from traversal puzzles to combat sequences. More on those later.

While it may sound like a dream come through for Sonic fans, the open world suffers heavily from a myriad of technical issues that really pulled me out of the experience. 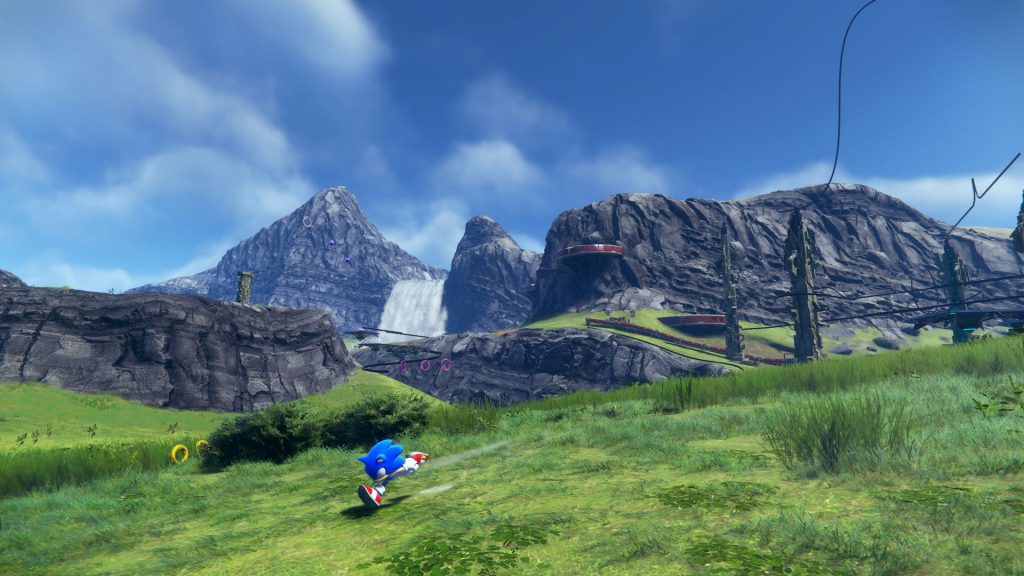 One major problem is the excessive pop-in from the foliage, terrain, and even the hilariously out-of-place rails that are just floating around the world with little to no explanation. There were a number of times when I had to stop myself from pushing forward because the rest of the platforms and rails to slide onto haven’t loaded in yet.

What the world lacks in functional cohesion can also be seen in the way the environments are designed. Muddy textures and bland art design hinder the wide open spaces from feeling exciting the way Sonic levels usually are. While it may be fun to run around from one end of the map to the other, it’s not all that great to look at. There is a dynamic day-and-night cycle but the weather effects leave much to be desired. A large part of the problem is the commitment to a semi-realistic look when the cartoonish art design of previous games was already more than enough.

You have to walk before you can run 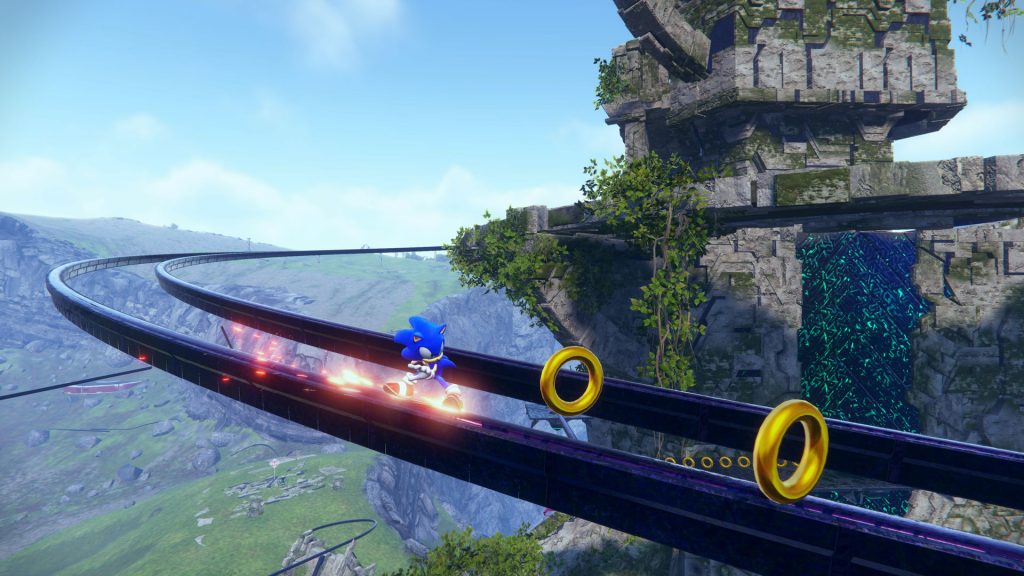 Progressing through Sonic Frontiers’ campaign requires completing a bunch of activities that are spread throughout the map. Each one will give you corresponding items/resources that you have to accumulate in order to continue the story. You don’t have eight hearts to give to Amy? Come back next time.

While it’s great that the developers provide a lot of different activities for the player to lose themselves in, none of them felt like a complete experience. It doesn’t help that the story doesn’t exactly stand out. There are some moments where the main cast does have a moment where it goes deeper into their relationships but, at the same time, it also feels like the game is taking itself way too seriously. Even the protagonist’s overall feel falls flat at times. Villians who only show themselves every once in a while can be done right as long as the developers make sure that each moment is maximized to its fullest extent. Unfortunately, you only get vague lines that will only leave you confused about their motivations. The narrative failed to hold my interest beyond the first couple of hours of the game.

The different activities all throughout the map do feel lacking as well. They’re not difficult by any means. Whether it be accomplishing simple puzzles through Sonic’s different skills or combat sequences, Sonic Frontiers feels like it’s trying to put everything in a pot but failing to nurture any of it, leaving the whole experience feeling undercooked.

One huge missed opportunity was the fact that each of the worlds you visit has no interactive gameplay elements that are unique to their themes. Once you played the first world, you’ve played all of them. The changes are practically purely cosmetic. It would’ve been nice to see Sonic ride the winds or run around a volcano. Anything to shake up the bland open-world formula that has been played out far too many times already. 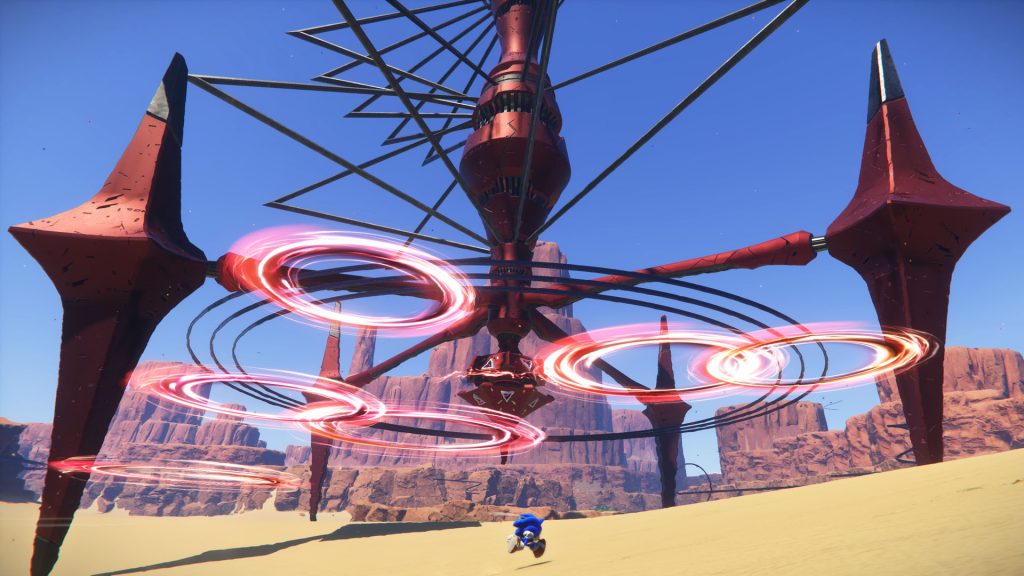 Thankfully, Sonic Frontiers’ cyber levels do shine as a highlight of the game. These are reimagined levels from previous Sonic games using the current engine and are as fun as they sound. You can find them scattered throughout the map and each one contains a set of challenges that provide you with keys once you complete them.

This is where Sonic Frontiers is at its best in both mechanical sense and aesthetics. The cyber levels look fantastic with a rainbow of colors being presented and an enjoyable variety of gameplay options to play around with.

This is the only time when unique enemies, level/environment design, and challenges pop up. This is what the game is supposed to be.

Unfortunately, they’re over in a couple of minutes and you’re thrown back out into the wild. Generic robot enemy designs make combat feel superficial. Sonic’s abilities are fun to play around with as you level him up but everyone dies with just a couple of hits anyways. There’s no need for strategy or any form of tactics. 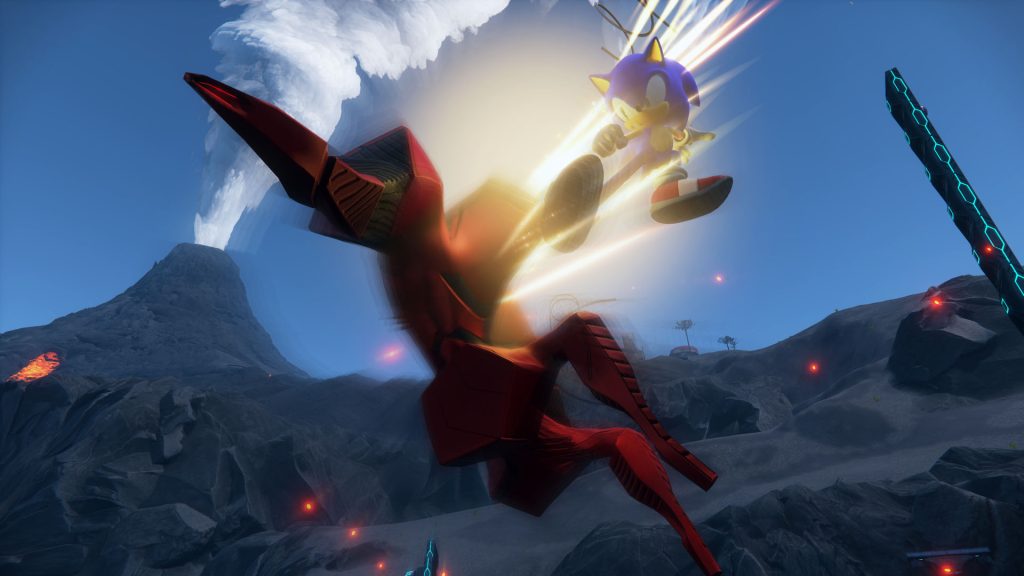 There are mini-bosses scattered around the map that do provide some creativity with how you’re supposed to engage with them. These ones I look forward to these ones even though they still don’t offer any challenges. They’re also unskippable. Once you stumble onto one, there’s no escaping.

And finally, each world is capped off with a massive colossus fight which you’ve probably seen from one of the trailers. These are spectacles that are cool to look at but do feel janky at times and are straightforward to play around in. Much like the rest of the game, these fights could’ve been so much more but they end up being executed in a way that is so simple.

Given that the developers were committed to making sure that the game is the same throughout all the platforms it’s being released in, I can just tell how much the Switch held this one back for the more modern consoles. 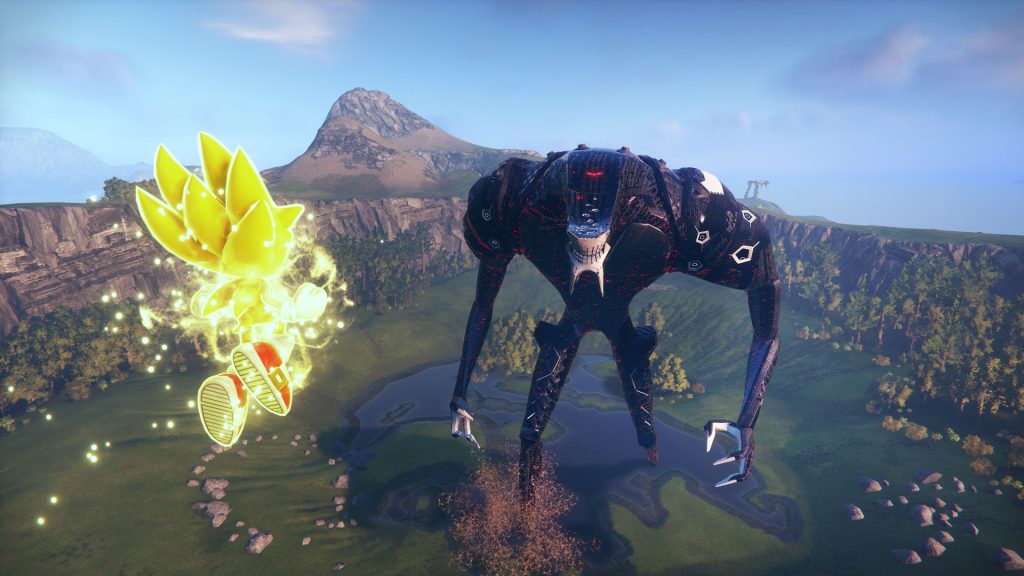 Sonic Frontiers feels more like a proof of concept rather than a full-on release. It’s a game that just screams potential but never really gets around to meeting any of them.

I can see how someone may have fun on this one. Die-hard fans of the franchise may enjoy some of the character interactions and a fresh new take on the formula. However, if this is the format Sonic decides to continue on, I hope the next entries are far more refined.

Gameplay mechanics, visual identity, and technical capabilities are all lacking in Sonic Frontiers. It’s another bump in the road for the blue hedgehog. Here’s to hoping he gets to pick up the pace sometime soon.

What Sonic Frontiers has in potential in everything it introduces to the long-standing franchise is immediately lost in the way it’s all executed. Poor environments and a less-than-stellar gameplay loop derail the entire experience to a crawl. Sonic Frontiers Review | Building up and losing its momentum