A fitting tribute, a legacy secured 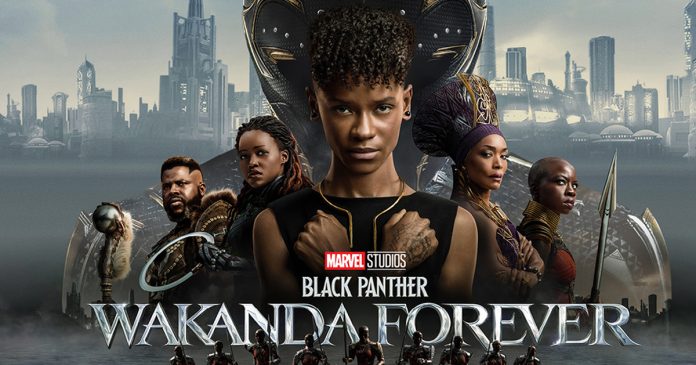 Black Panther: Wakanda Forever a coupe of weeks back and has managed to grab more than $675 Million at the Global Box office moving past the total earnings of the first Iron Man film (at $585 Million) and Iron Man 2 ($621 Million). The success is most likely brought about by its timing, and the entire world waking up from the Covid stupor it had for the past 2 years. But perhaps, one of the key elements for the success of the film lies with how good the movie really is. Especially with how big of a feat the rest of the cast and crew had to do when the lead OG Panther, Chadwick Boseman, lost his life from his bout with colon cancer on August 28, 2020.

Director Ryan Coogler and Co-Screenwriter Joe Robert Cole had the monumental task of continuing a franchise without their lead actor – and the duo has done so with grace, reverence, honor, and much style.

So how did they do it? How do you continue a story without the Black Panther to pass the mantle on? For the cast and crew of Black Panther: Wakanda Forever, you anchor your movie on the honesty of that loss. You build a story around those that he left behind and what that means for an entire nation, a mother, a sister, and a lover.

Black Panther: Wakanda Forever doesn’t skirt around the fact that Boseman is gone. The opening sequence is frantic, it sets the pace and establishes the emotional throughline that everyone will go through, but no one will feel it more than Shuri (reprised splendidly once more by Letticia Wright).

Exploring the World without T’Challa

In the first 5 minutes we find Shuri trying to artificially recreate the heart-shaped plant that gave Black Panther’s their superhuman powers. Apparently T’Challa is dying and only the heart shape plant could eventually save him from the unnamed illness that afflicts him. But, because Killmonger (Michael B. Jordan) torched all the plants in the previous film, they cannot readily create the tonic for T’Challa.

As T’Challa’s heartrate drops, Shuri frantically tries to finish a batch that could maybe help save her brother – but then things were too late. Queen Ramonda (Angela Bassett) bursts into Shuri’s work chambers, announces that the T’Challa is gone and tries to console her daughter. This is how Black Panther: Wakanda Forever starts.

The entire film will revolve around how everyone will try and cope without their king and protector. Ultimately, it becomes a film about survival’s guilt, legacy, and about love and acceptance.

Without its king and protector, nations are trying to peer inside Wakanda specially to gain access to its most valuable resource: Vibranium – an alien-originating alloy that’s imbued with qualities unknown to modern science. It is one of the toughest metals in MCU, virtually undetectable and highly impact resistant.

But what was once believed to be the sole property of Wakanda, a group of scientists and CIA operatives were able to detect the metal on other side of world, a few thousand meters below sea level. This is our introduction to the mythical people of Talokan and their champion and protector, Namor (Tenoch Huerta). Swapping Atlantis for a more Meso-American lineage, Talokans are people that once lived in the Yucatan Region (Ancient Mayan Civilization) who, to escape a plague decimating their people, turned to an ancient plant extract that transformed their bodies to adapt to the water.

In the middle of all of this is Riri Williams (Dominque Thorne), a brilliant MIT student who inadvertently built a radar to detect Vibranium as a clapback to her professor for deeming the project impossible. This device, somehow, got into the hands of the CIA now under the leadership of one Valentina Allegra de Fontaine (reprised once again by Julia Louis-Dreyfus) in their arms race for the valuable metal.

As Namor wishes to keep his people safe from the prying eyes of the surface, he will go through lengths and stop at nothing from making sure that world above is unable to find Vibranium within their waters – even if it means killing the scientist that was able to create the device in the first place, in this case, college genius Riri Williams.

Everything goes on a head-on collision when Wakanda became the refuge of the child prodigy and they refused to hand the child to the Namor. What ensues next is a brutal battle that will change the course of Wakanda and force a mantle to a reluctant Shuri.

Loss and Redemption for Phase 4

MCU Phase 4 seems to start off with exploring loss, finding a way to navigate through the grief and (hopefully) come out better at the end of the ordeal. We’ve seen this with Wanda Vision, Spider-Man No Way Home, Dr. Strange In the Multiverse of Madness, and we’re exploring it once more in Black Panther: Wakanda Forever. However, the loss is more palpable this time because we’re actually being reminded of absence of Chadwick Boseman and, in turn, T’Challa.

Shuri’s emotional journey is the main heart of the film. We see the various facets and phases of grief and how this affects a one of the most brilliant minds in the MCU. In Wakandan lore, Death is not the end — but just another phase. And yet, given this history of tradition about going back to the Ancestral Planes, Shuri cannot take comfort in her loss. On the flipside, we’re also shown Namor’s rightful (although misplaced) xenophobia because of their people’s history with the Western World (aka Colonialism).

Despite adding new characters and exploring multiple heavy themes, Ryan Coogler has managed to navigate the entire cast and crew with tightrope precision. The balance was beautifully done.

Much like the first film, Black Panther: Wakanda Forever successfully celebrates Black and Brown culture and meshes them well within the context of the MCU. The references being pulled for Talokan was mind-boggling — down to Namor’s Kukulkán outfit. Even the Talokan’s signature sun raise open palms hand sign were rooted in actual historical records of Yucatan Maya.

And while the MCU version of Namor may not coincide with its original comic history, the changes made opened up the film for more cultures to appreciate. The story-telling was well done that after the film, you’ll readily accept their version.

But even with high-octane action and dazzling large-scale battles happening on screen, it is the quieter moments that really help the movie shine. Amidst Namor flying around destroying Wakandan ships, the Dora Milaje scaling down a large water vessel, Iron Heart blazing the skies, and a bitter hand-to-hand fight between Namor and Shuri, it’s the heart-to-heart discussions with Shuri against her mother, or Okoye (Danai Gurira) and Nakia (Lupita Nyong’o), or Shuri with Namor that keeps the heart of the film beating.

Of Continuing the Legacy

Black Panther Wakanda Forever is a love letter to the franchise as it is a fitting tribute to Chadwick Boseman. The film tackles heavy themes of loss, mourning, processing grief and finding redemption as well as successfully passing the baton to Leticia Wright and the ensemble. It also introduces new characters that will spawn their own franchise (Iron Heart is scheduled to run its series on Disney+ next year as part of Phase 5) and opens new potential narratives now that Namor has made his debut on screen.

But more than that, Black Panther Wakanda Forever is one of the best MCU films of Phase 4 and can even go toe-to-toe with some of the best MCU movies created. Personally, I’m placing this near Captain America: Winter Soldier in terms of crafting a solidly structured story that keeps you invested in all the characters on screen, all the while always being conscious of Chadwick Boseman’s presence and what his loss meant for the entirety of the MCU (and the film industry at large).