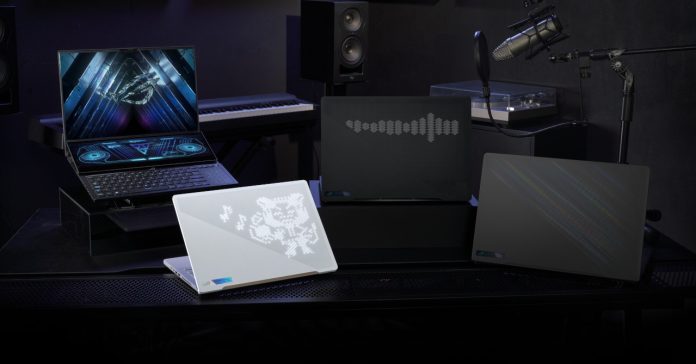 These new laptops from ROG feature the latest tech innovations from the brand, including ROG Nebula Displays, ROG Intelligent cooling, and more. Plus, these laptops pack the newest CPUs and GPUs from AMD, Intel, and NVIDIA. To start with, we have the ROG Flows series. First is the new Flow X13 which now features up to an AMD Ryzen Zen 4 processor and up to an RTX 4070 GPU. It also comes with up to 32 GB of RAM. Plus, the X13’s chassis has been completely redesigned, further shrinking its footprint by 10mm while increasing its battery capacity to 75Wh.

The laptop also comes with a redesigned hinge for better cooling, as well as a new touch QHD 165 Hz Nebula Display. Next is the Flow Z13 which now comes with an NVIDIA GeForce RTX 4060 Laptop GPU with a TGP of up to 65 W (a 62% increase compared to the previous generation). The new Z13 also comes with a dedicated MUX Switch and NVIDIA Advanced Optimus support. Finally, it has a 13-inch QHD 165 Hz refresh rate Nebula Display There’s also the new Flow X16 which now comes with an Intel Core i9 13900H processor and up to an NVIDIA GeForce RTX 4070 Laptop GPU, complete with a MUX Switch and NVIDIA Advanced Optimus. As with the other Flow laptops, this new X16 has a Nebula Display with up to a 240Hz refresh rate. Next up, we have the refreshed ROG Strix laptops revealed at CES 2023. For this year, the SCAR lineup has been renamed to the Strix SCAR 16 and 18 owing to their larger 16-inch and 18-inch 16:10 aspect-ratio screens.

Screens aren’t the only things that have been upgraded here though as the new SCAR laptops also come with enhanced chassis for better cooling. They are also powered by Intel’s top-of-the-line 13th Gen Intel Core processors and NVIDIA GeForce RTX 40-Series Laptop GPU at 175 W. There’s also the new Strix G16 and Strix G18 which are equipped with the same 13th Gen Intel Core i9 processor, and can be configured with NVIDIA GeForce RTX 40-Series Laptop GPU for excellent esports performance.

Plus, there’s the Strix G17 and Strix SCAR 17 which are powered by the latest AMD Ryzen Zen 4 processors with up NVIDIA’s latest GeForce RTX 40-Series Laptop GPUs. While the AniMe Matrix was exclusive to the Zephyrus G line before, ROG now included it in the new Zephyrus M16, giving users more personalization options for the brand’s signature 16-inch laptop.

Aside from the LED matrix, the M16 also comes with even more powerful internals. Specifically, it comes with up to a 13th Gen Intel Core i9 CPU and an NVIDIA RTX 40-series GPU. And of course, the laptop has a 16-inch, QHD Nebula HDR Display with Mini-LED technology and up to a 240Hz refresh rate. The ever-popular Zephyrus G14 also got some love from ROG at CES 2023 as the new model is now powered by up to an AMD Ryzen Zen 4 CPU and up to an NVIDIA GeForce RTX 40-Series Laptop GPU with a MUX Switch and NVIDIA Advanced Optimus. The G14 also introduces ROG’s first 14-inch Nebula HDR display, with 504 dimming zones, 600 nits of peak brightness and 100% coverage of the DCI-P3 color space. For the best gaming laptop experience, look no further than the refreshed Zephyrus Duo 16. Aside from retaining its signature dual-displays, the Duo 16 is now powered by an AMD Ryzen Zen 4 processor with 16 cores and NVIDIA GeForce RTX 40-Series Laptop GPU with a MUX Switch.

Finally, we have the new ASUS TUF Gaming F15/17 and A15/17. The F15/17 comes with up to an 13th Gen Intel Core i9 processor while the TUF Gaming A15/17 comes with an AMD Ryzen 9 Zen 4 processor. These laptops are also powered by the latest GeForce RTX 40 series laptop GPUs.

On top of these, the new TUF gaming laptops also have dedicated MUX switches, and NVIDIA Advanced Optimus. Finally, these new TUF models come with enhanced cooling as they have dual Arc Flow Fans that provide up to 13% more airflow than their predecessors.

Pricing and availability of these new ASUS ROG gaming laptops will be announced soon.

- Advertisement -
Previous article
Which One Piece Odyssey Edition Should You Get? | All Game Editions, Pre-Order Bonuses, DLC, and Special Offers
Next article
ASUS unveils new creator laptops at CES 2023