Comrade has no Chill 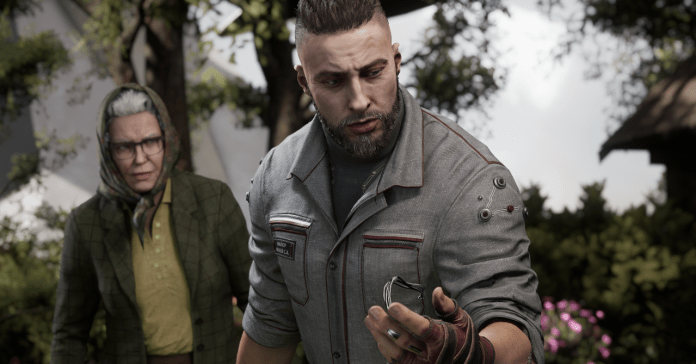 Atomic Heart, from Cyprus-based developers Mundfish have teamed up with publishers 4Divinity to bring us a slightly different action-horror shooter that gamers have grown accustomed to.

I recently got a chance to experience the game myself via a trip to Singapore, and boy, did it surprise me. The Reality Rift Arena over at Clarke Quay bore witness to the occasion, and as we settled into a brief preview before anything else, it all became clear.

This ain’t your average horror shooter. Cliche, I know. But I couldn’t be more honest. Let’s have a looksie.

Both an homage and a trailblazer

You wouldn’t be able to figure out just how Atomic Heart ticks from trailers and gameplay videos alone. It’s an experience. 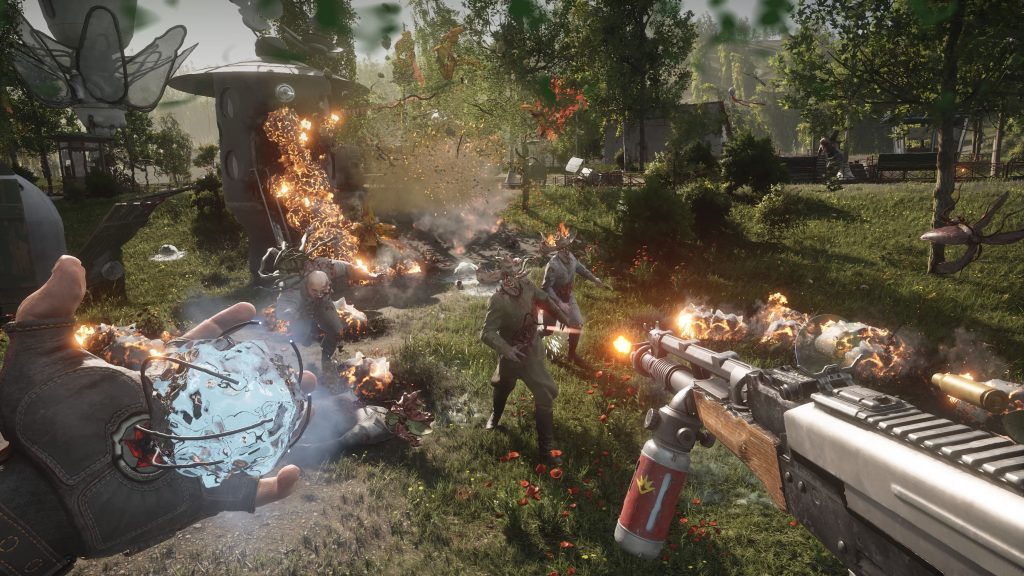 As you drop into the game, you’re greeted with all the classic FPS controls, shooter mechanics, and game design present in most of its modern contemporaries. You start things off with some exposition in the form of a beautiful and lengthy on-the-rails sequence before you actually jump into the story. 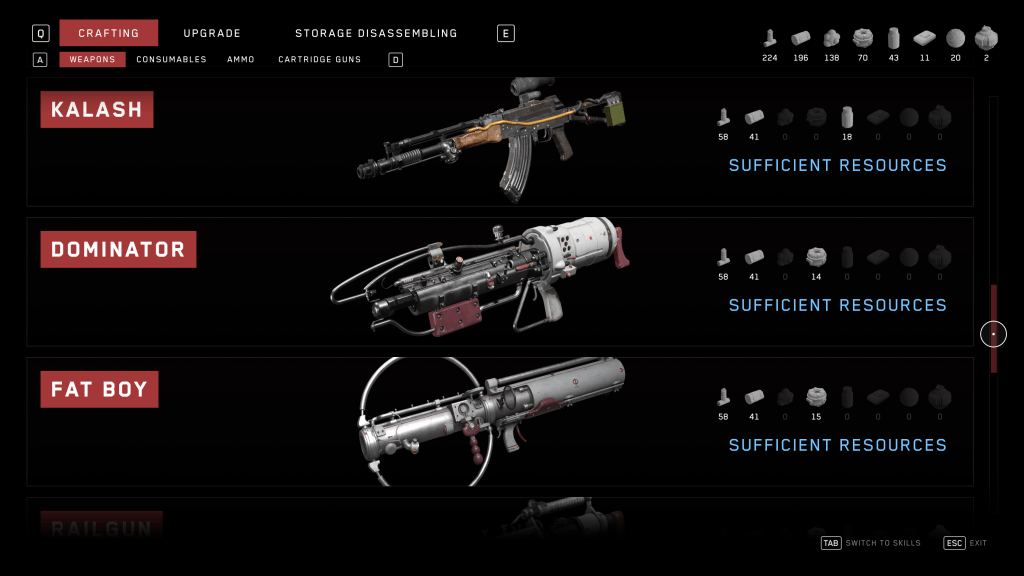 Overall, it’s familiar territory. From the populace, to the terrain, your brain will likely be processing how to navigate the areas–and will be eager to check if you can knock down NPCs. You’ll notice a lot of similarities in the colors and design, which are vibrant and detailed–it’s less like the usual dank and dreary horror title, and more akin to classic Bioshock.

It give off that nostalgic, but brand new feeling that’s quite refreshing nowadays. It’s nice to see something that makes you stop for a moment with your mind processing what it reminds you of, instead of the usual “same stuff, different year” rehash that we’re getting oh so tired of. 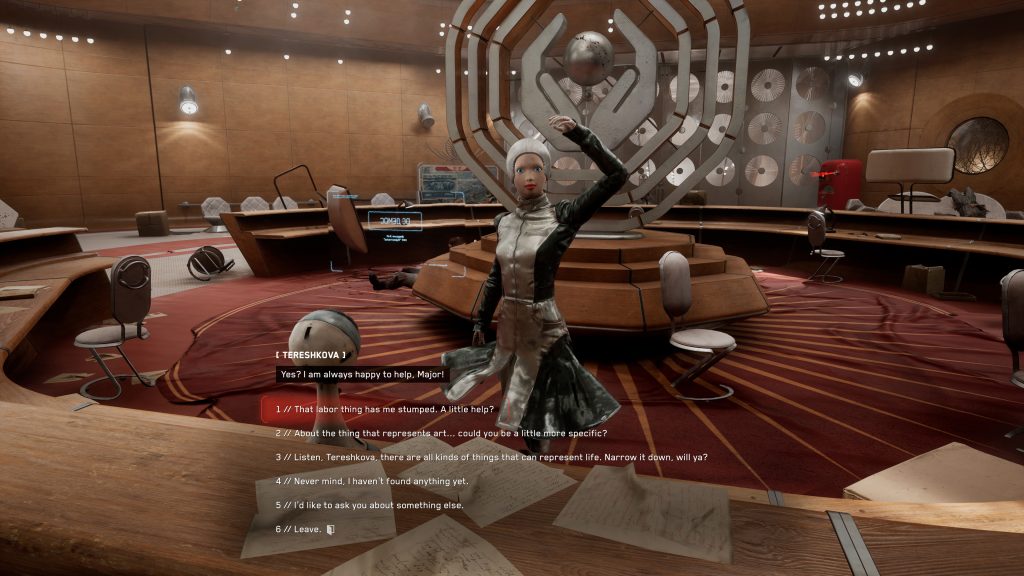 You can say that Mundfish didn’t exactly remake the wheel here, but they did present it in a way that you’d actually question whether it’s a wheel or not.

The gloves come off hard once the actual action sequences begin. You’re immediately oriented in the combat controls, which involve a lot of timing, dodging, and spatial awareness. I cannot stress enough on the latter. Also, expect a lot of melee. The fun kind. 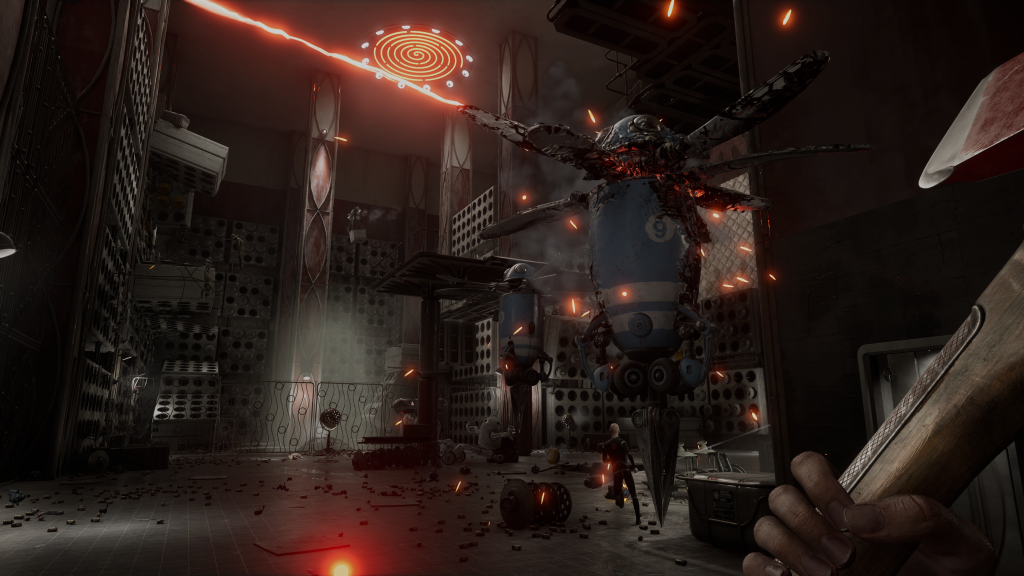 Enemies are durable, agile, and relentless. If you’re the kind of player who relies on run-and-gun tactics and shooting willy-nilly, you’ll be taken back to school with a rude awakening. Dodging will be a major factor in most of your gameplay, and it’ll have to be second nature once the ball starts rolling.

Thankfully, you won’t be relying on guns and your fine motor skills to save the day. You’ll be unlocking and acquiring a set of steampunk science-based powers that serve as both tools and weapons. Yes, this isn’t just a Bioshock homage, but a Dead Space and Dishonored one, as well. Make no mistake, these are neither skills simply ripped off other games, nor are they god mode cheat codes. They’re tools that blend well with both the gameplay and mythos of Atomic Heart–tools which you must use wisely and efficiently. 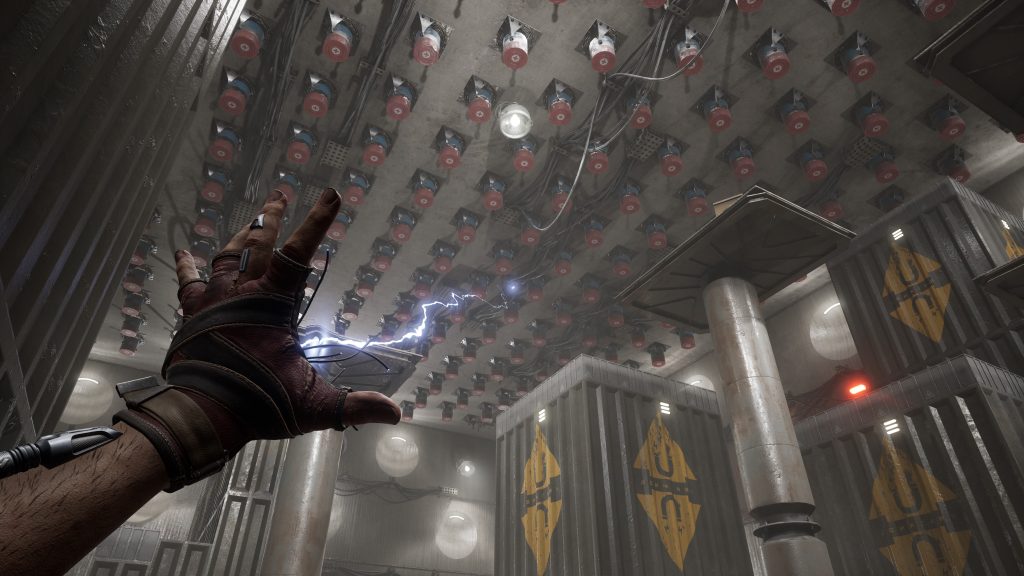 Do you like puzzles? No? Well that’s a darn shame because Atomic Heart has quite a few up its sleeve. It’s not all doom and gloom, though. You won’t be hard pressed to learn 4D chess just to clear a stage. The environment plays into these puzzles, so that spatial awareness you’ve been sharpening for combat will come into play. Also, it’s become a habit for most modern gamers (myself included) to skip any on-screen text just to progress. Don’t do this. Trust me.

I know this might not be the first question gamers will ask, but I’m sure it’ll pop up. “Can it run on my potato rig?” 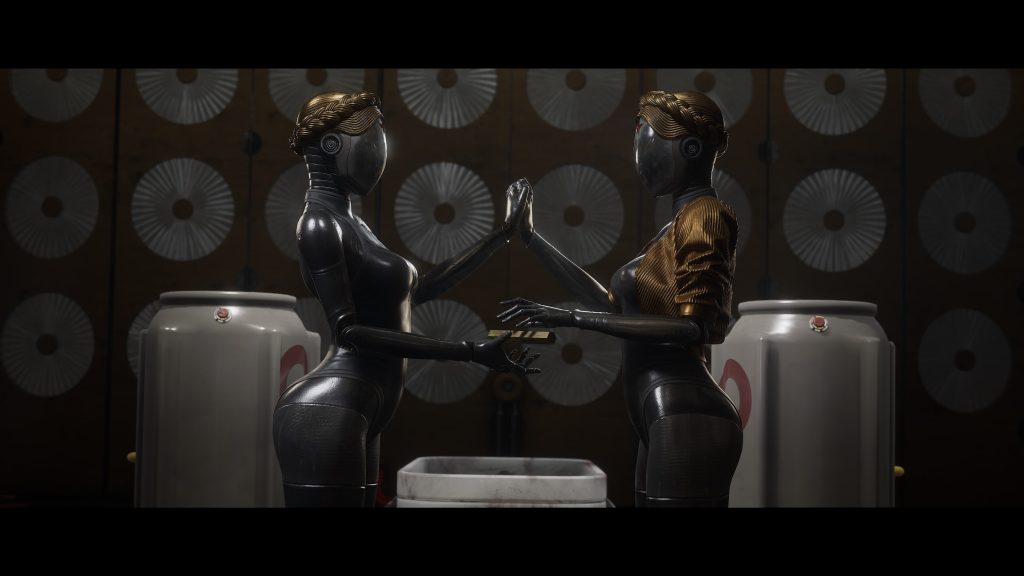 Most of the game’s charm comes from it’s epic, colorful set pieces and smooth, fluid gameplay. Take those away, and the experience won’t be as fun. While the rigs used on-site ran RTX 3060 graphics and higher-end processors, I decided to run my playthrough with the bare minimum settings just to see how it operates. 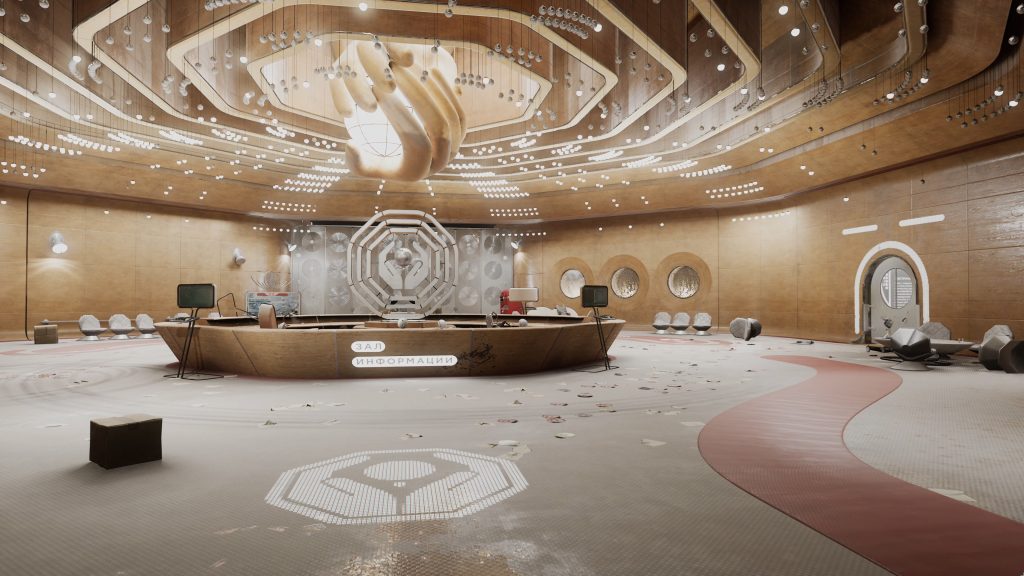 The minimum requirements to run the game are an AMD Ryzen 5 1600 or Intel Core i5-4460 CPU coupled with an AMD Radeon R9 380 or NVIDIA GeForce GTX 960 GPU. It’s not that hard to get up and running, but how does it perform? 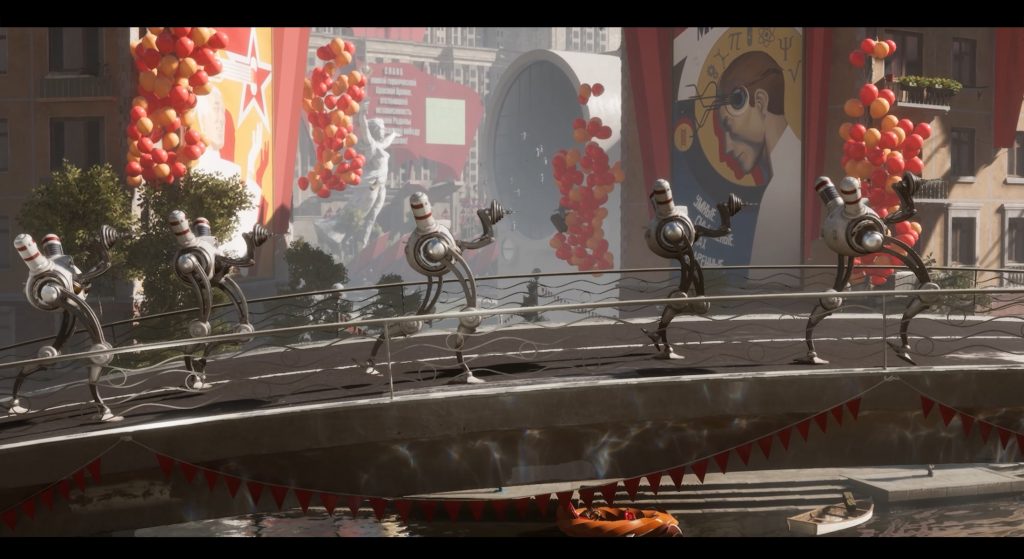 I’m no tech expert, but it still looks and plays pretty well. I know you’ll have to trust my words as I don’t have actual screenshots from the event, but the lowest settings didn’t yield any major deviations from its high and “Atomic” settings. Sure, you get less detail and the FOV isn’t as clear, but your overall experience playing the game shouldn’t be affected. If you’re a perfectionist…then why aren’t you rocking an RTX 4090 in the first place? 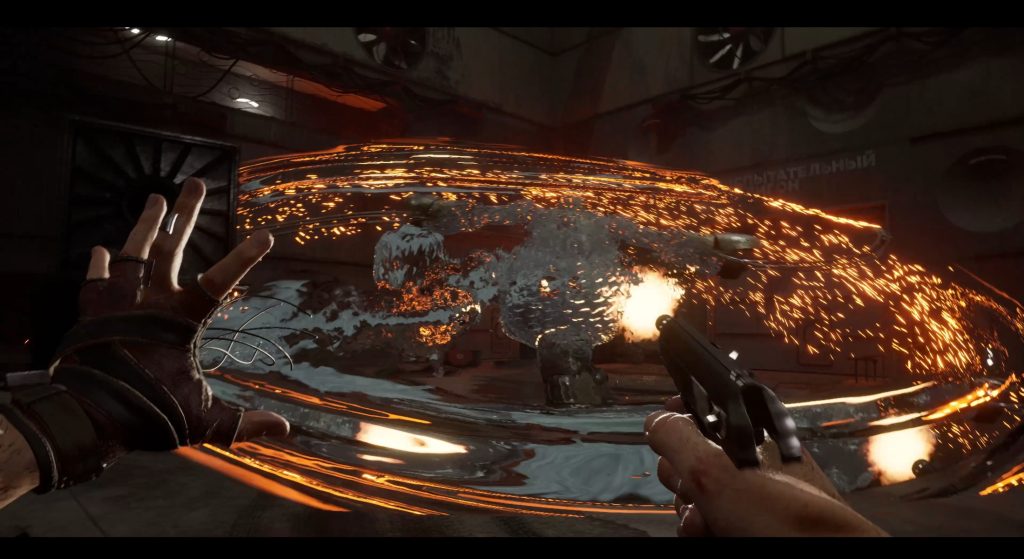 The time I spent at Reality Rift, and with the 4Divinity Team was a blast. There was much to discuss (off the record), and it was great to hear what everyone had to say about the project. Everyone’s excited for what comes next, and our wonderful publishers personally guaranteed to bring the hype.

In terms of Atomic Heart itself, well, it’ll be a dark horse among its contemporaries, to say the least. It deviates from the usual action-horror shooter, and employs game elements that one wouldn’t expect from a game marketed as such. I’ve yet to witness the story in its entirety, but it brings about a lot of intrigue. Will it go the usual trope-y route, or will it subvert our expectations. I’d sure like to find out.

If you want a good challenge, enjoy horror elements in your shooters, and love some great eye candy, then you might want to sit tight and wait for more information on the game to drop. If you’re more of an action hero who like mowing down enemies with ease and very little consequence, then maybe it’s time you tried something new–something like Atomic Heart. 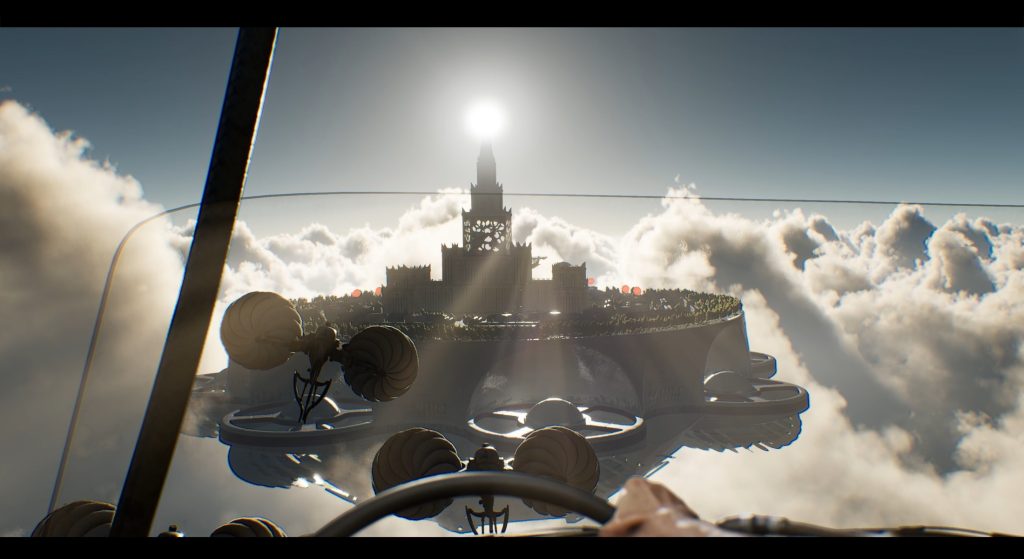