Happy Birthday Batman! 75 years of making every kid wish they had grappling guns!

This week we celebrate the 75th Anniversary of DC’s second-most iconic superhero: Batman. Created in 1939 by Bob Kane and Bill Finger, the success of the Batman was unprecedented at the time and has rose to the ranks of DC’s top heroes even if doesn’t have an ounce of superpower (well unless you consider an endless pit of money, resources and Alfred at his disposal as superpowers).

Celebrating 75 years of Batman, DC threw a whole slew of news related to our favorite caped crusader. Here’s a look at all things Batman this week.

One of the bigger news to hit the interwebs this week is another sneak peek at the cape and cowl to be worn by Ben Affleck on the next Superman film…or is it Batman…? Zack Snyder film. The display was presented in 2014’s SDCC and an image with Affleck in it was released Snyder over twitter with the caption #75 (referring to, of course, Batman’s 75th Anniversary). Here’s the image sans the tweet: 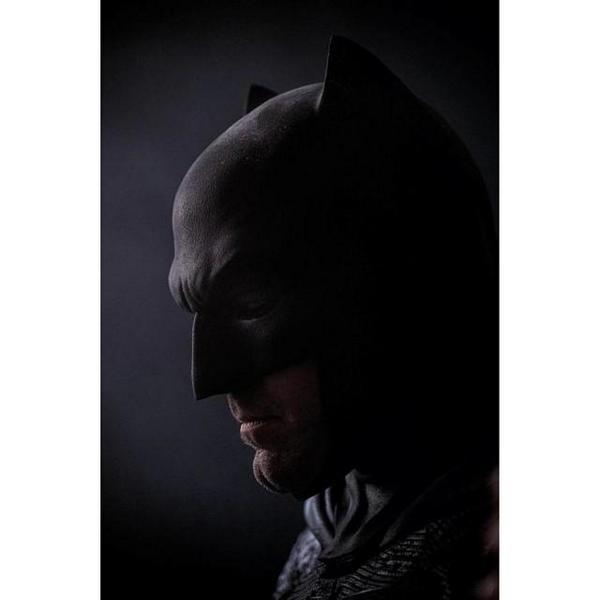 We know PlayArt Kai’s collaboration with DC has produced some of the best iterations of our beloved comic characters (see DC Variant Line Article here), but this new announcement pretty much topples all of those.

Kingdom Hearts creator and notable Final Fantasy designer Tetsuya Nomura re-envisions the Batman in pure Kingdom Hearts fashion. The hyper-armored Dark Knight is more terrifying than ever with those two skeletal-like claws sticking out of his cape. If this won’t strike fear in the hearts of criminals, I don’t know what will.

Released for publicity in Comicon, this particular piece still doesn’t have an official price or release date as of late. Still, we’re pretty psyched.

While the launch date for the most anticipated Batman game gets pushed to 2015, it hasn’t stopped the marketing guys from WB Games to make us drool over these amazing Pre-Order DLCs. Aside from the Harley Quinn Story Pack that comes with every other pre-order of the game, Gamestop announced recently that they’re including a Red Hood story pack on their pre-order as well! Wish we can get all of these pre-order packs here once Datablitz opens its own list.

September could not come sooner as everyone waits for the “Batman Prequel” tv series, Gotham. To build the hype further, Fox (via Entertainment Weekly) released these stunning character posters.

If you haven’t seen the TV plugs for the show, you should. Head over to our previous article about it.

That’s a slew of characters right there and with a universe as rich and diverse as the Dark Knight’s it makes absolute sense to treat each character with much sincerity. None of the people who’s ever donned the cape and cowl has much intensity and sincerity in character than, dare I say it, Adam West – the Batman who made the musing comics of one Bill Finger and Bob Kane into the pop-culture icon it is today.

Adam West is the Best Batman Ever

I don’t care if you can Krav Maga your way through criminals or hang them upside down and get throat cancer asking them to swear to you, Adam West IS the most bad-ass Batman ever and here’s why:

1)      Batman gets bitten by a shark, wrestles with it and waits while Robin fetches the Shark Repellant Bat-Spray as the shark continues to maul on his leg. Batman wins and the shark explodes after.

3)      While we know that Bruce Wayne is Batman, the lofty citizens of Gotham do not. And how do you play it when you have to talk to your alter ego and convince people you’re not the same person? Well you play it like Adam West. You play it to the letter. And that letter is B. B, for #BOOM Bi-Polar.

Still, if camp isn’t your thing you can choose from the many iterations of the Bat.  Whoever, whatever they are (except for the “nipple years”), there will always be a Batman that would serve your comic-book geekdom. Here’s to the hero that we need and the hero that we definitely deserve. Happy birthday, Bats!

- Advertisement -
Previous article
Rurouni Kenshin Cast will Be in Manila for Kyoto Inferno Premiere!
Next article
A Gift from Westeros: Game of Thrones Season 4 Gag Reel!