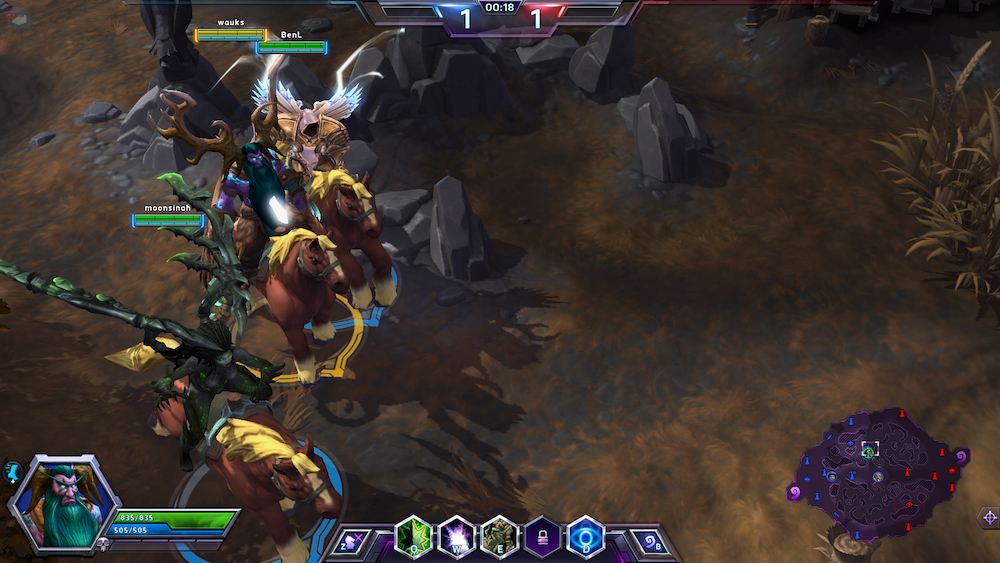 Heroes of the Storm Initial Impressions

As we earlier reported we’re currently part of the Alpha Testing for Blizzard’s upcoming MOBA game, Heroes of the Storm. We’ve probably put in well over 10 hours into the game already and we just wanted to quickly chime in on UnGeek to share with you guys what we’ve found so far. If you’re not familiar yet with Heroes of the Storm, please do watch the cinematic trailer above before you continue reading. ^^

The game started out on a light and fun note. The tutorial is about James Raynor being sucked up into a “Nexus” where he is met by Uther Lightbringer. You then go through a series of challenges which helps you familiarize yourself with the basic gameplay mechanics. The main villain in the tutorial is Diablo and the interaction between Raynor and the Prince of Evil is just hilarious! Blizzard’s writers definitely get two thumbs up from us. We won’t spoil it too much but just believe us when we say you’ll give more than a chuckle when you play through it.

After the tutorial we were thrust into the main dashboard of the game where we had to play two modes before going full-on multi-player. We breezed through the initial challenges and we were definitely still having a ball! Most of the fun though came from checking out the available heroes and seeing what their abilities were. It was awesome seeing all the characters of the Blizzard universe on one screen.

Gameplay is slightly similar to DOTA. We say slightly because the over-all meta-game is quite different. It’s super simplified MOBA which will allow more people to enjoy it because the skill level needed is much lower. There’s no last hit kill for gold and everyone in the team levels up at the same time regardless of how many kills you individually have. You also cannot buy items that you can equip on your character. The progression is mostly with the skills you unlock as you level up. The only major similarity we saw was the iconic three-lane battleground.

The biggest difference with the metagame though is the emphasis on the map objectives. Doing the “quests” can sway the tide of battle since winning them gives the team a huge advantage when it comes to offense. Either the defense towers of the opponent stop functioning or you summon a really bad ass monster that will clear a path for your army. The tasks per map are displayed very clearly during the loading screens.

So far so good right? Well the real frustration sets in when you start doing multi-player. Since the game is still young, gamers haven’t unlearned their DOTA habits yet. A lot of players still wanna go herding minions along their lanes instead of grouping together to finish the objectives. This can really be annoying! Blizz should definitely launch a major educational campaign on how to properly play HoS. If you’re lucky though you find a good team but most of the time everyone is still trying to get a feel on how to play the game.

So far that’s what we have for our first report. We’ll do a few more posts about HoS in the coming days so be sure to keep coming back here at UnGeek! 🙂