Board Game Review: King of Tokyo

Ever since Godzilla was first introduced in 1954, we’ve all have had some sort of fascination for rampaging giant monsters who either swoop in to save the day or just have it in their Kaiju hearts to destroy a city because that’s just what they do, but have you ever found yourself wanting to be in their shoes?

King of Tokyo is a game by Richard Garfield and published by Iello Games. In King of Tokyo, you and up to 5 other friends, take control of a Gigamonster of your choosing who all have it in to be the top apex predator and lay claim to the City of Tokyo. To win, you either have to be the smartest monster of the bunch and rack up 20 victory points or simply be the last monster standing when the rubble clears.

What’s in the box?

Each game has the following contents: 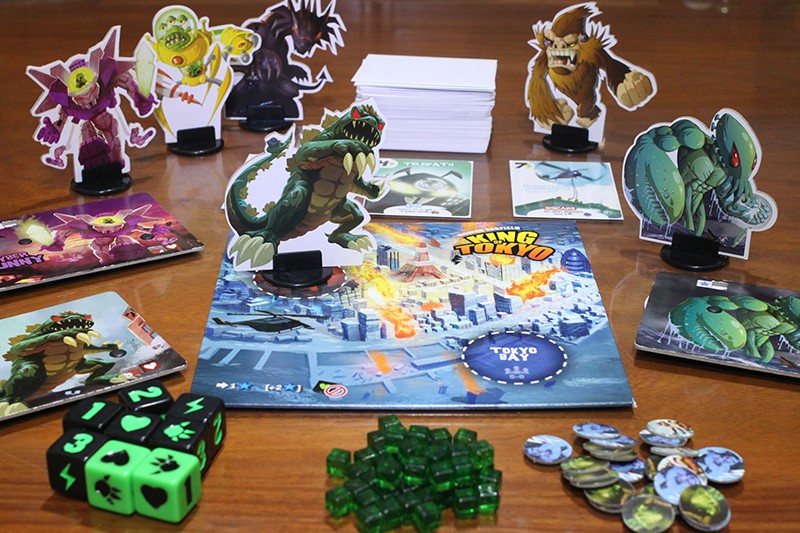 Once you start playing more board games, you’ll notice a difference in the quality of components and King of Tokyo does not disappoint. The game board, monster tokens, monster boards, and cards are all of high quality; plus the artwork by Benjamin Raynal gives the game its charm that brings you back to your days as a kid who builds things only to have their favorite toy trample on it in the end.

Each player chooses a monster and is handed their corresponding monster token and monster board. The game board, which represents the City of Tokyo, is laid out on the center of the table. The 6 black dice, 50 energy cubes, and cards are then placed within easy reach of each player with 3 of the cards placed face up beside the game board.

A starting player is determined and the rumble commences!

There are three things to do on your turn: Rolling and rerolling the dice, resolving the dice and buying any of the three face up cards available in the middle of the board that may help you blow up your opponents or get you more victory points, if that’s the route you do decide to take.

The dice allows you to attack other players, store up energy to purchase cards, heal up wounds, and score additional victory points. They maybe rerolled twice and then you simply resolve which of the dice you choose to keep.

The first player to resolve an attack roll immediately jumps into Tokyo and places their monster token in the game board. All other players who resolve an attack hit the monster inside Tokyo and the monster that has control of Tokyo attacks all the other monsters outside the city. A monster inside Tokyo cannot heal up and must therefore relinquish control to the last player who dealt it damage, that monster then assumes control of the city.

Should you buy this game?

King of Tokyo is fun, fast and full of laughs. One game usually lasts around 30 minutes, but the replay value is tremendous. I’ve had nights where I’ve brought the rest of my gaming hoard only to play King of Tokyo over and over again. It’s one of the great gateway games for people who might be new to the hobby because of its simple gameplay and the immense fun.

If you’re looking to grab a copy of King of Tokyo, it is available at Gaming Library for Php 1,900. They also have a copy of the game that you can try out if you visit their locations in Makati and in Quezon City.