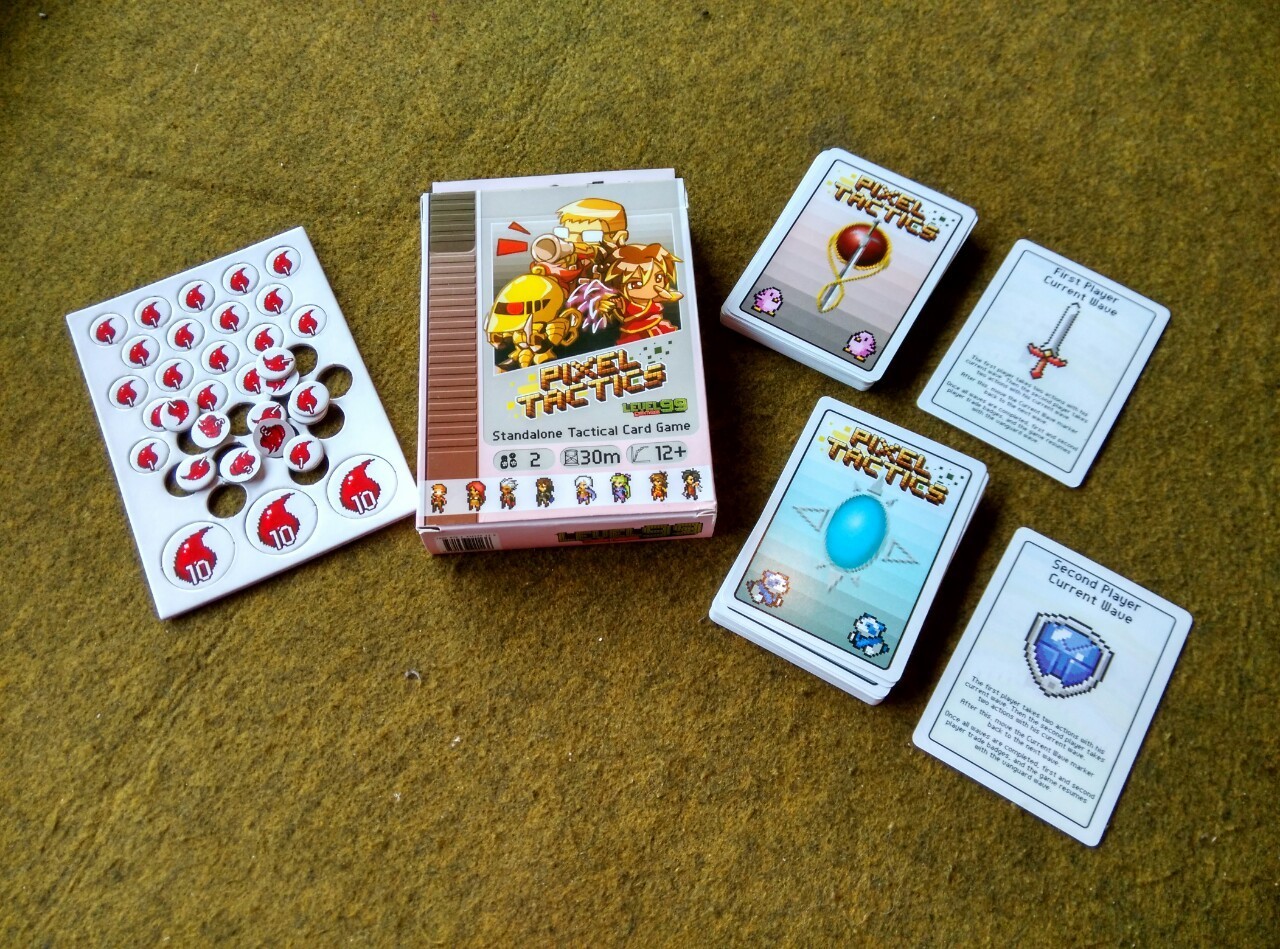 Tactical Games have always piqued my interest , whether it would be Final Fantasy Tactics, Advanced Wars, Fire Emblem, or even the more recent X-COM offering. There’s just something about the turn-based planning that has me clamoring for more even though some campaigns end in a flaming pile of failure.

When I came across what is one of the hottest games on everyone’s lips, Pixel Tactics, and actually asked about it, it was simply described as Final Fantasy Tactics turned into a card game. With a hook like that, I knew I had to sit down and play this game ASAP.

Pixel Tactics is a two-player game that pits opponents head-to-head as their armies duke it out in the hopes of pounding the opposing team’s leader to the ground through the careful placements of troops on your units’ Vanguard, Flank, and Rear positions. That’s it, pancit. Can’t get any simpler than that.

The one thing in love about Pixel Tactics is its one of those games you can keep in your bag at all times. All the box contains are: 50 cards (25 cards per faction) plus a few extras to determine turn order and a paper game board. The cards are wonderfully produced and made of good paper stock. 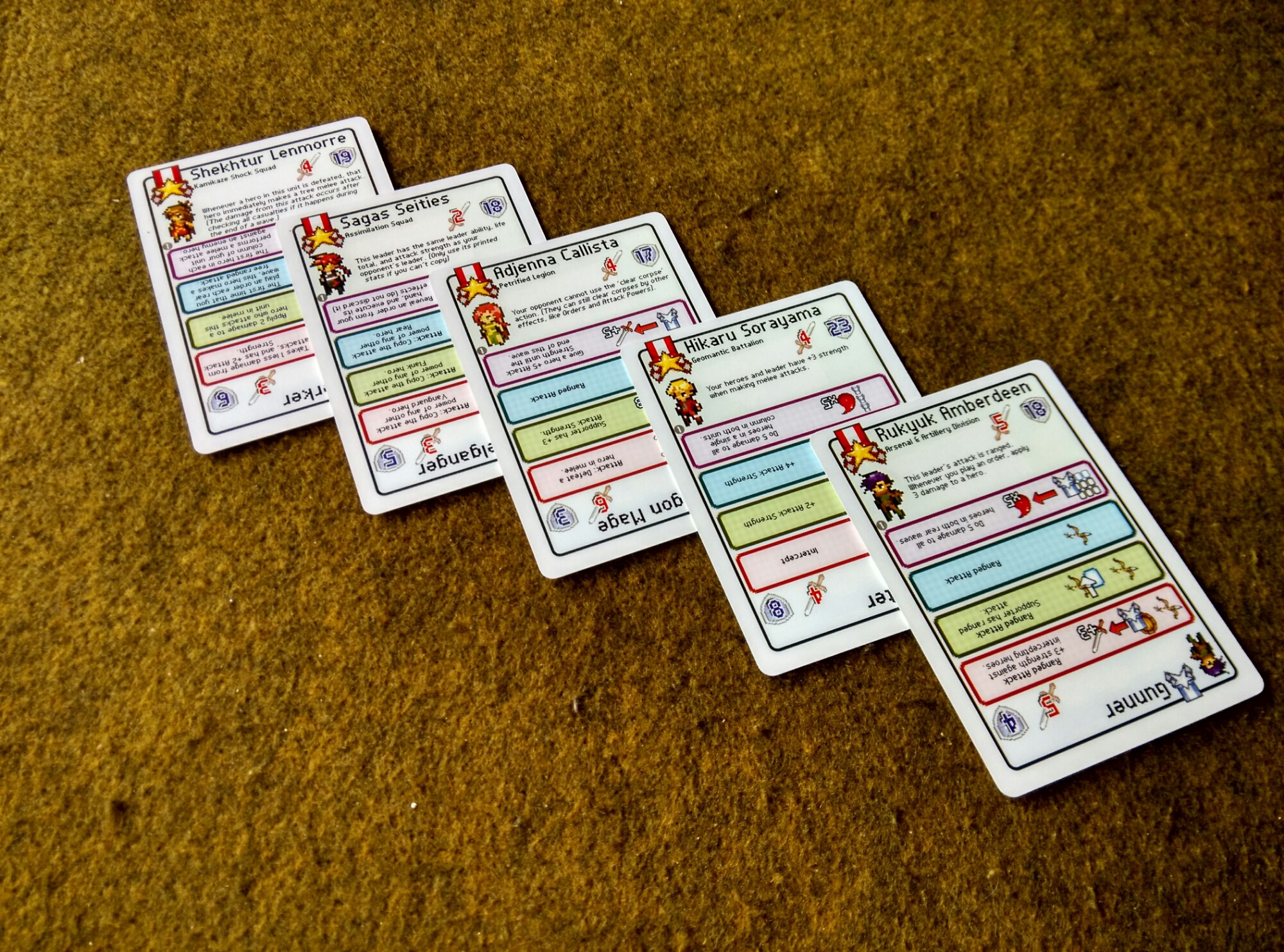 Each card is adorned with awesome 8-bit illustrations, thus the name of the game, which dictates what that certain hero does when placed in different positions and what it contributes when played as an order instead. Flip that card around and it is given a name and a specific power if chosen as the leader of your army. 25 hero cards means 25 different leaders and play styles… Just think of the replay possibility of this game. 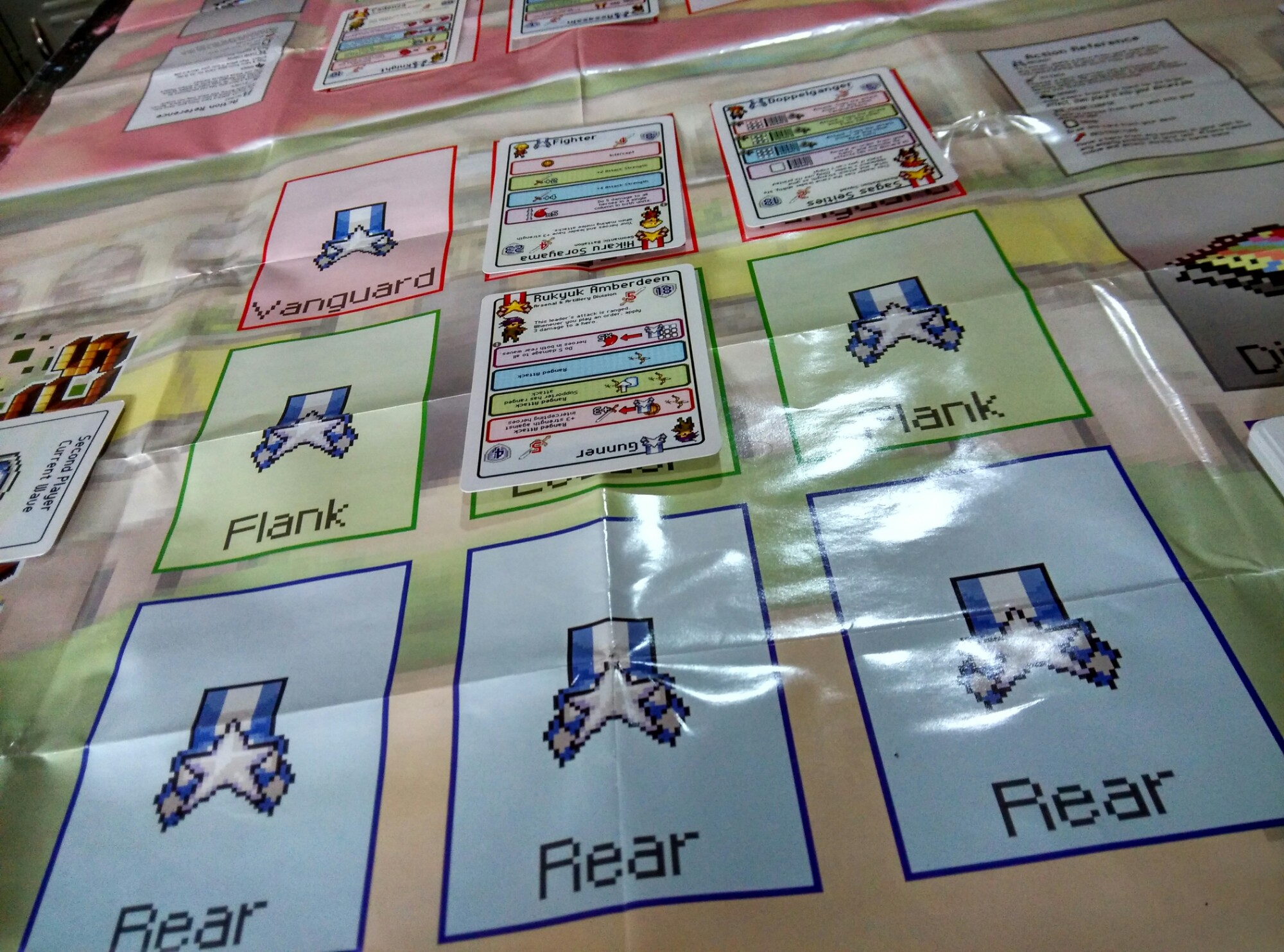 My only gripe is the paper mat/game board and the horrifying fear I have of spilling something on it. It’s quite understandable they opted for the paper game board, but if you have the same fears as I do, there is an option to buy a play mat much like the ones used by some Magic: The Gathering players.

What I love about Pixel Tactics is that it’s easy to pick up and play. Yes, it is true that it may take a few games to familiarize yourself with each of the units available to you, but learning on the fly is just part of the fun.

At the start of the game, each player separates the red and blue faction cards (careful to take out the blank cards if you haven’t filled it out with custom powers) and shuffles each of them to make their army. A starting player is determined and play begins.

Both players draw their starting hand and select a leader from the heroes they draw. Once a leader is selected, it is placed at the center of your unit indicated on the mat.

During your turn or wave as its called in-game, you can do two of the following things:

2.) Recruit a Hero or simply put, placing a hero on an empty slot in the current wave you’re on.

3.) Attacking with a hero or your leader.

4.) Clearing a corpse. Yes, fallen heroes do not automatically go into a discard pile.

6.) Restructure or moving around heroes to optimize your unit.

There is a cease fire during the first round after which you are welcome to whack away at each others’ heroes and leaders until only one is left standing. It’s also good to know that players take turns with the initiative to attack at the end of each round. This mechanic makes it a really balanced game and gives each player a chance to correct any mistakes to make each game as exciting as the next.

Let’s talk about the upside first. It’s a fun, competitive game that’s easy to pick up and play plus each game doesn’t last that long at all (unless you’re playing with someone who has severe analysis paralysis). The replay value is great given that there are so many ways to play the game because of each leader power and how it affects your overall strategy.  I would definitely recommend picking this game up especially considering the price tag on it. It’s available at Gaming Library for only Php 850.

On the downside… Well, maybe not really a downside, but it’s a game for 2-players (unless I’ve missed out on a variant where you can go 2-on-2). This might not be the right fit if you have board game nights with friends, as it may lead to anti-social moments with the rest of the group.

The real downside for me is the paper mat that is highly susceptible to wear and tear, especially if you play this game a lot. This is easily remedied by purchasing the game mat that will soon be available or simply placing on the table without the mat, but where’s the fun in that. 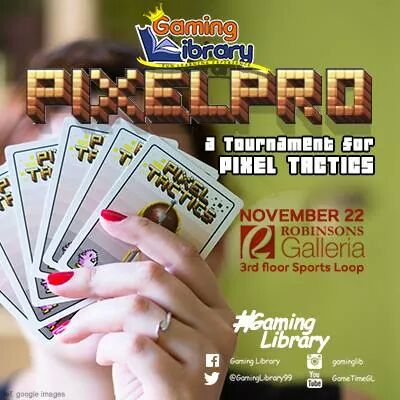 If you’d like to see the game in action or already have a few victories under your belt, you’d be pleased to know that Gaming Library will be hosting a tournament tomorrow, November 22, at the Sports Loop of the Robinsons Galleria during their All aBoard event where you can drop by and try a host of other games as well.

For more details about tomorrow’s tournament or their other events, you can check out Gaming Library’s Facebook Page.