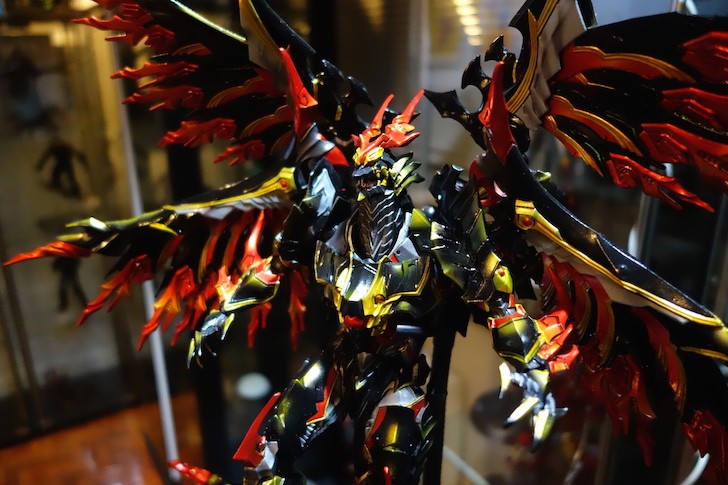 Square pretty much made Bahamut a household name for gamers all over the world. Each time they would release a new Final Fantasy installment, people would be excited to see the Dragon King in action because he kicked so much ass and he looked ridiculously epic. Square’s merchandising division, Play Arts Kai, re-imagined Bahamut with their Final Fantasy Variant series of collectible figures. We were finally able to snag one a few days ago and we’re excited to share with you guys what we think of the fig as well as a bunch of photos of the Dragon King!

Let’s get one thing out of the way — this is not a super faithful rendition of Bahamut in any of the Final Fantasy series. As we said earlier, this is a re-imagination or an interpretation of Bahamut. This particular figure has a more humanoid form but it still looks very much frightening and dragon-like thanks to the wings, tail, and the draconic head. The figure uses three main color themes: black, gold, and red with minor accents of silver.

As expected from Play Arts, the level of detail and articulation in this figure is amazing. There are ball joints for almost every single part, including the wings! However, while there are a lot of articulation points, this fig suffers from a very top-heavy build. It’s super hard to pose it because the wings are so huge that the figure will topple over unless you use a stand or you properly position the tail so that it counters the weight of the wings. That said we would only pose Bahamut in an upright position without a stand.

The best way to pose Bahamut is to use a good stand for him. The bundled plastic stand though that comes with the figure is just not enough. It doesn’t give the Dragon King justice. What works for it though is the Hot Toys Dynamic Stand! The sturdy base and the bendable but very durable rod makes posing Bahamut so much easier and you get to give him the majesty and terror that he deserves. Here are a few more shots of Bahamut:

Over-all we’re happy with the fig. The top-heavy build is definitely an issue but it’s something you can work around with if you get yourself the Hot Toys Dynamic Stand. Bahamut by Play Arts Kai is now available in a several local toy and gaming shops. Price ranges anywhere from Php8,000-Php10,000. For the best price of brand new figs you might want to check out Big Boy Toy Store or Data Blitz. Not sure though if they still have stocks.

- Advertisement -
Previous article
Katana Bookends: Flashy and the Samurai Way to Display Books
Next article
Batman 75 and Endgame: The Story so far…