Quit what you’re doing and start QUILTING! PATCHWORK releases for the IOS and Android today!

Ah quilting. One of the oldest hobbies known to man… A technique of sewing layers of fabric together and making it padded, becoming part of a bigger pattern. This is one activity I don’t see very often nowadays along with knitting, and to be honest… it’s a hobby that I might consider at some point in my life (along with owning maybe a gajillion cats). But it looks like a lot of effort and not to mention a lot of time and talent is involved.

Now why am I saying all this? Patchwork (ported by Digidiced), that wonderful 2-player board game created by esteemed designer Uwe Rosenberg (Agricola, Le Havre, Caverna) hits the IOS store today! (12pm GMT+1 /6am EST) Not only can I make something that looks somewhat less-impressive, I can do it at a fraction of the time! And mind you this is a game not just about quilting… This is COMPETITIVE QUILTING! Apparently someone else is in to your gig as well.

To the uninitiated, the tabletop version of Patchwork is an abstract, tile-laying, economic game where 2 players compete to build the most pleasing-looking, highest scoring quilt they could possibly make. The game’s currency is made up of buttons (one of the best game resources in my opinion) and at the same time it is also victory points (VP) which will be scored at the end of the game.

The flow of the game is really simple as you do only one of 2 possible actions. You either buy a patch of fabric to place on your player board, effectively filling up your grid and/or earning you some buttons. Or you can earn some buttons by moving spaces the player track till you go over the opposing player. 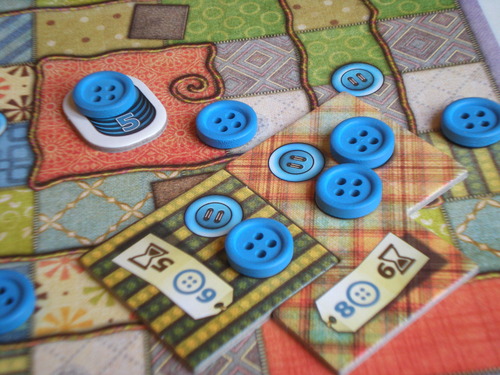 One neat element of the game is it’s time, depicted as an hourglass symbol in the patches. Depending on the patch you make, you can either make a complicated patch that takes you a long time to make but in the long run will grant you a lot of VP, or you can stitch simple patches that takes less time, but can possibly give you more turns than the other player, speeding up the process of filling up your own grid. It’s an interesting tug-of-war mechanic in the game that is presented very well in the games interface. Speaking of the interface game features 3 different modes – Local (for pass and play or against the AI), online casual play (unranked) and ranked online play for competitive players. 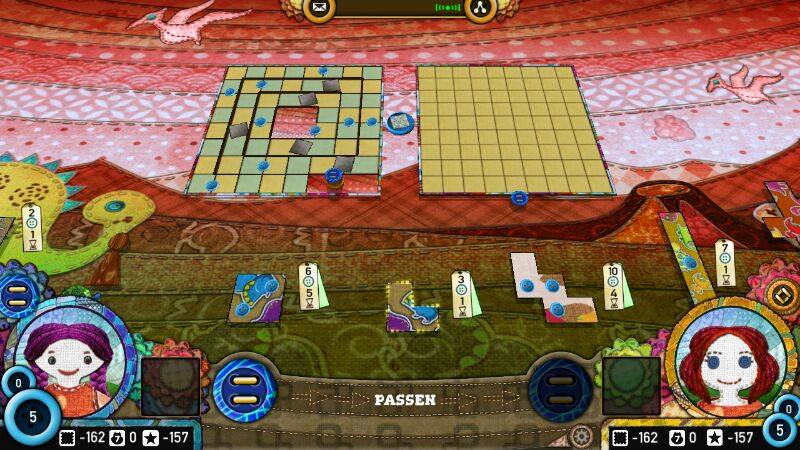 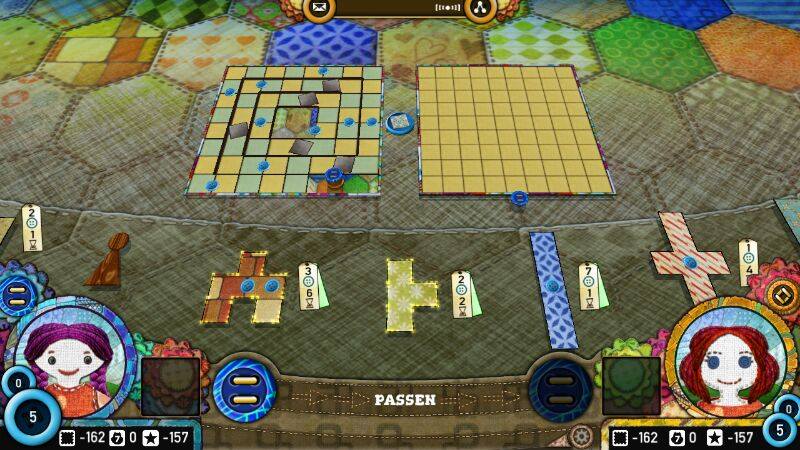 Another really great thing about this game is how the way it looks. The cardboard version translates well into the app, as it should be, because the game really is about building the most aesthetically-pleasing masterpiece. The art is very colorful and lively and can appeal to just about everyone. In true Uwe Rosenberg fashion, after you’re done playing the game, you can look proudly at your player board and say… YEAH, I BUILT THIS ALRIGHT!!!

Patchwork releases today for $2.99 on the App Store and Google Play store! So what are you waiting for? Quit what you’re doing and start stitching! Keep it here at UnGeek for the freshest news in gaming and till next time! Keep on gaming!

To DOWNLOAD Patchwork here are the links for WINDOWS, ANDROID and iOS