[Fold of the Old] Fortress America 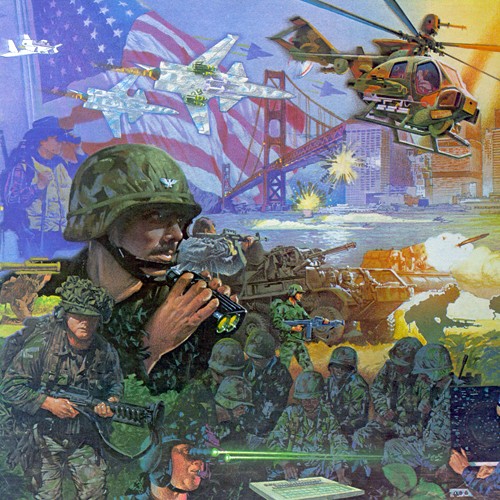 Imagine a not too distant future where America is the only first world country left and everyone else is living in a third world state trying to get a green card but they can’t because they’re getting “pew pew”ed by the US immigration office from outer space! And worse, America is hoarding the best Burgers in the world! Well no, not really…

Fortress America is a Milton Bradley Game from the 80’s designed by Michael Gray, and winner of the 1986 Charles S. Roberts Best Twentieth Century Game. This asymmetrically strategic 2-4 player board game where one player (probably the masochistic player in your group) takes on the beleaguered US forces against 1-3 opposing players taking the REST OF THE WORLD as they try and conquer the United States. Now what brought about all this hate on the Yankees? Well its probably because of their high-tech “Star Wars” defense system consisting of orbital satellites armed with LASERS (well more like they reflect laser beams back to earth from a giant laser cannon in the US)!

As part of team (or you’re the one-man team) invader, your job is to conquer and hold enough American cities to force the US to surrender while the American player has to prevent that long enough to stymie the invader’s onslaught and achieve US victory. This is done thru the various military units you control in the game and of course dice rolling.

This war game favors defense and combined arms (infantry, mechanized, and air units are all used in a battle) where the US player having unlimited reinforcements and LASERS while the Invaders being numerically superior at first with a finite number of units in reserve and requires an unbroken chain of occupied/conquered territories to satisfy their supply lines.

This big box game is filled with components from a big map of the USA, different sided dice, hundreds of tokens, cards and a variety of figures from infantry to vehicles and cities! One of the coolest pieces of this game are the Hover Tanks. The big coffin box also comes with player trays to serve as your container for your faction components.

So what’s it like playing this game well first off the game averages around 3-4 hours. The aesthetics are top notch as you see your grand army of good-looking figures (or whats left of them) spread and scatter all over the map. The game revolves on simple and direct approach strategies (since there are no hidden movements or secret base) common of w/c is to use superior numbers against your opponent and of course using units with better attack dice w/c is something Team Invader will capitalize on early game.

For the US player, it is more difficult starting with your forces spread thinly all over the board however acquiring more lasers each turn gives the US a very unique advantage since you have a 60% chance to destroy any enemy unit on the board with it. Its blitz versus attrition. For me the best part of the game is when the exhausted invaders are deep within US territories and need to push forward while the defending Americans have their second wind. The tide turns and the pressure to perform starts to weigh-in on both sides.

The game does feel old with its simple mechanics (it is an 80’s game) compared to what we have nowadays in the board game scene. In 2012 Fantasy Flight Games took an interest in this classic and has released an updated remake. Check out their promo video.

No longer in a coffin box as it follows the contemporary size for board games, this remake is still filled with hundreds of gorgeously crafted game components from tokens to updated figures, a big redesigned map of the US, custom dice minus the player component trays. In addition, as part of the FFG update the invading factions now have variable player powers thru the use of their unique faction deck of cards and the game now has a fixed number of turns. Even with FFG’s tweaks the game’s core experience is essentially unchanged.

Their isn’t a lot going for it in terms of replay value however its theme, struggle, survival and time pressure are well represented and felt. If you ever feel patriotic about defending the land of the free and the home of the brave then try this out. If you are the rest of the world and Hollywood ain’t your thing try this out, bring America to its knees. This light-to-medium war game might just be for you…

Hope to catch you guys on the next Fold of the Old. Also check out our previous FotO article, till then… See you at the table!