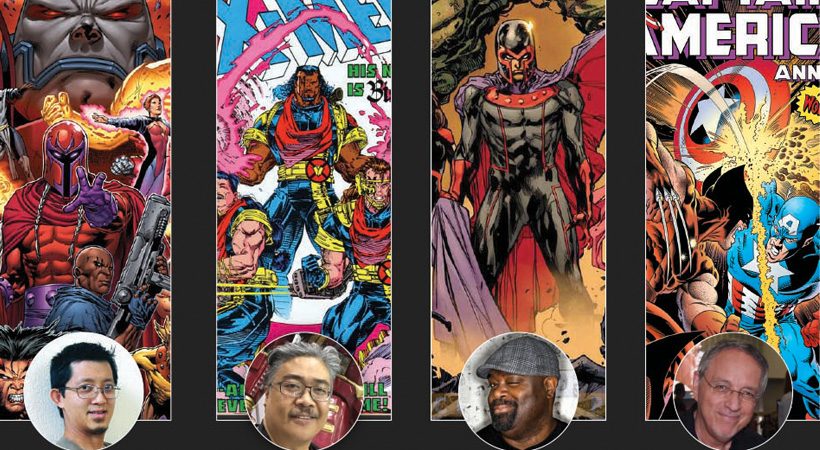 It’s a little less than a month before the AsiaPOP Comicon, biggest Comicon this side of Asia, happens and boy are we excited! We already know that the guys from APCC are flying in Haley Atwell (aka Agent Peggy Carter) as well as a myriad of cosplayers and artists but the guys are not stopping there! Here’s a look of who’s coming to APCC 2016 as well: 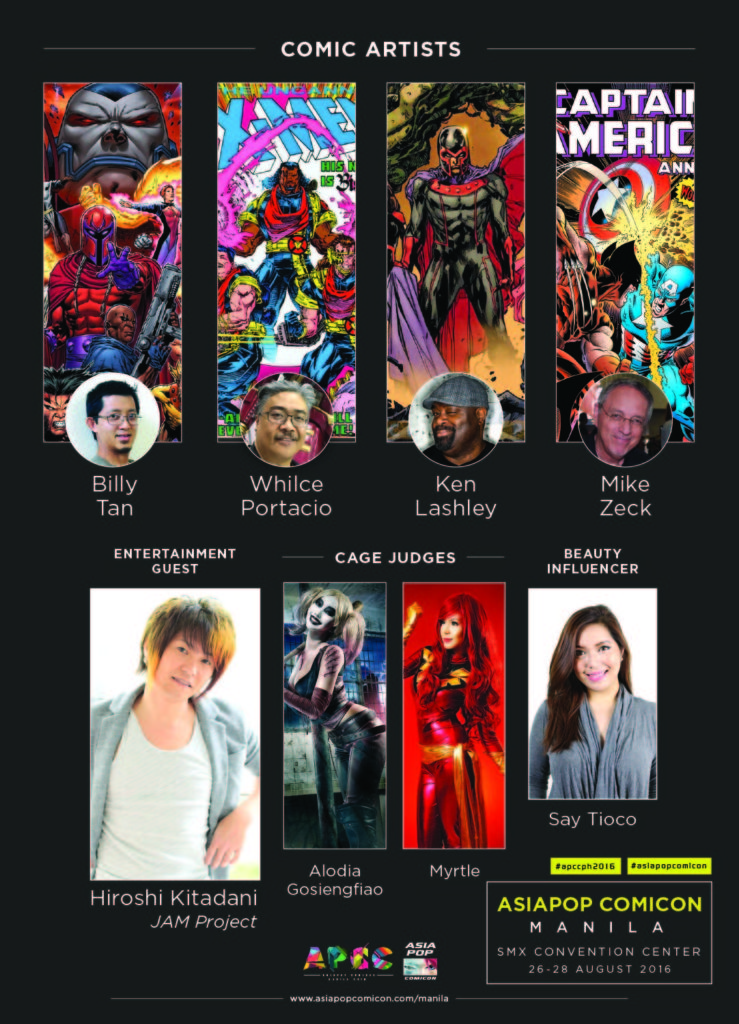 Topping the bill is JRock and anison (anime music) singer Hiroshi Kitadani (of the famed JAM PROJECT group). You may know some of his works such as We Are! that was used as the opening theme for the runaway hit series One Piece and the more recent head-banging opening music to the cult favorite One Punch Man, THE HERO!! ~IkareruKobushiniHonō o Tsukero~, as part of the super group Jam Project.

If you’re more attuned to Western geek culture, primarily in comicbooks, then look no further as APCC 2016 pulls in some of the best from the industry. Mike Zeck, Ken Lashley, Billy Tan, and Whilce Portacio will all be on the con! 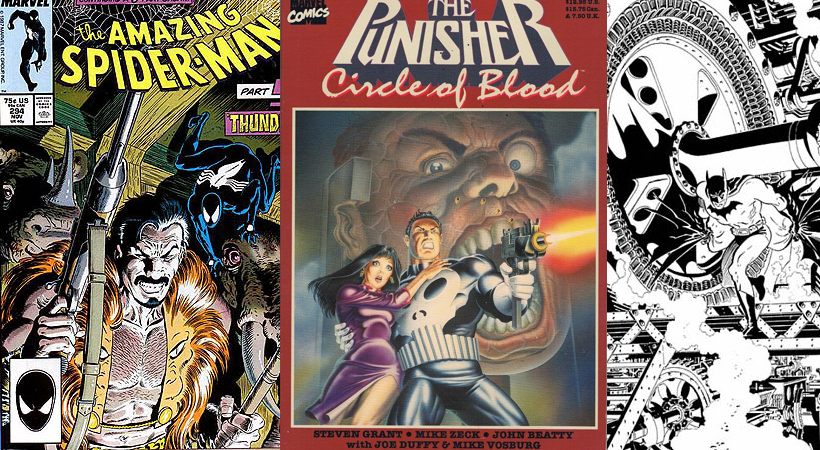 Mike Zeck is best known for his seminal work, Spider-man’s Kraven’s Last Stand. He has been a stalwart in the comicbook industry penciling other greats like Punisher’s Circle of Blood and Batman’s Legends of the Dark Knight. 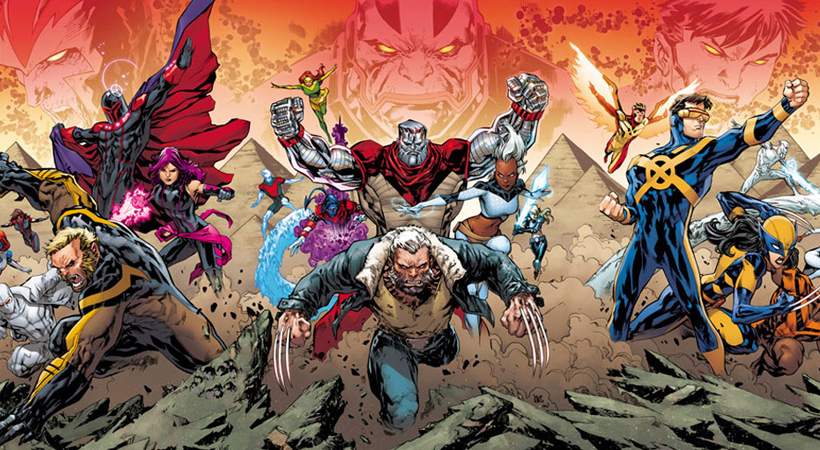 Ken Lashley is a comicbook veteran and one of DC’s go-to cover artists, having done covers for Batwing, Ravagers,He-Man, Superboy, Earth-Two, Red Hood and the Outlaws, Superman/Wonder Woman, Superman, Batman, and Suicide Squad, to name a few. He’s also worked on a myriad of other titles such as Excalibur, XCaliber Age of Apocalypse, Black Panther, X-Men, Spider-Man, Flash, JLA, Superman and SupermanDOOMED and currently providing art for the Uncanny X-Men run. 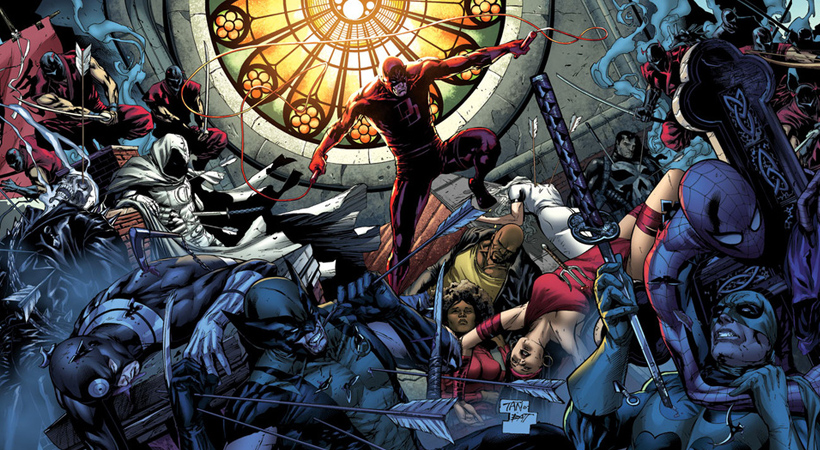 Billy Tan is a Malaysian-American comicbook artist rendering work for more than 20 years. Starting with Top Cow titles such as Tomb Raider, Tales of Witchblade and Spirit of Tao, Tan quickly rose the ranks and has now been penciling and lending his art skills to give life to known Marvel and DC titles such as X-23, Uncanny X-Men, Uncanny X-Force, New Avengers and Green Lantern to name a few. His work on Shadowland is phenomenal and sits close as one of my personal favorites of his. 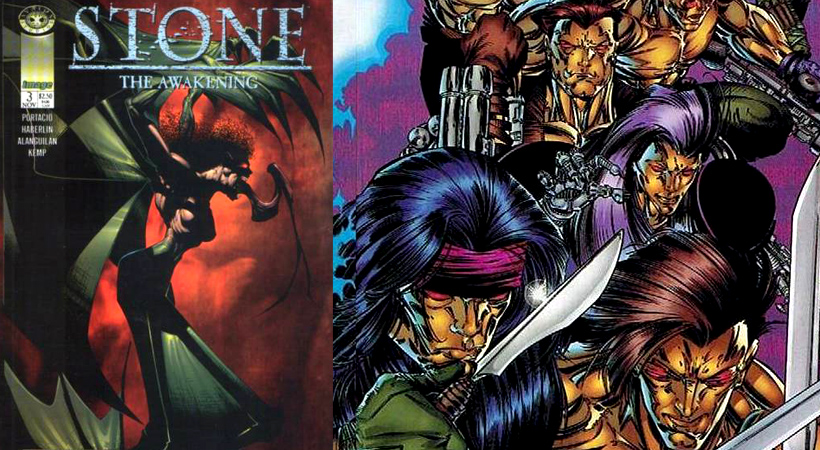 Whilce Portacio is probably one of the most well-renowned Pinoy comicbook artists in the industry. He’s been looked up to as the guy who “made it” and allowed a generation of Pinoy artists to get into the world of Western comicbook creation.

Whilce started out as a penciler for Longshot back in ‘85 before quickly gaining success and moving on to other titles such as the Punisher, X-Men and X-Factor. In 1991 he would get his big break by co-creating one of Marvel’s mainstay characters, Bishop. 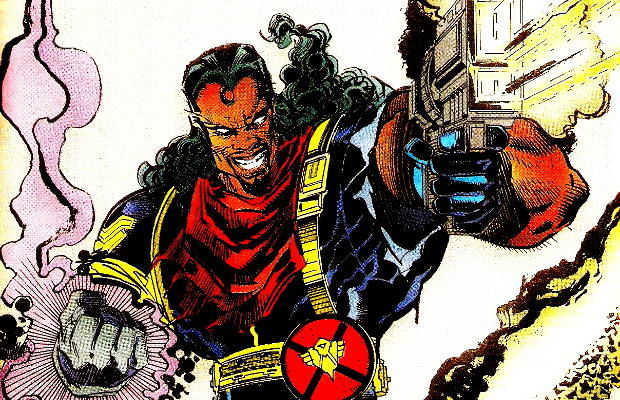 He also became a co-founder of Image comics (along with Jim Lee and several other high-profile artists) launching myriads of work including Wetworks and the highly successful Stone (based on Filipino Myths).
Now an independent agent, Whilce works with both Marvel and DC (and Image Comics) on many of their titles such as Batman/Superman, Authority, Batman Confidential, Spawn, Artifacts, Hulk, Journey Into Mystery, and Uncanny X-Men. Woo-hoo, Pinoy Represent! 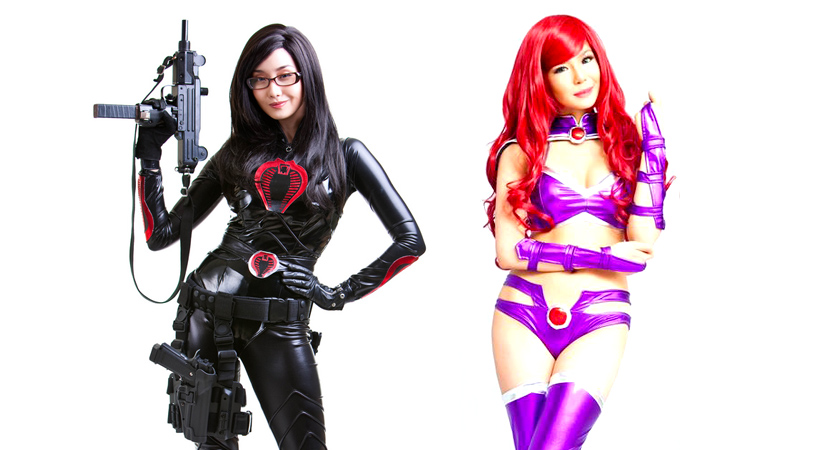 Speaking of Pinoys, the Con let’s our own talent shine as well as they have invited the Queen of Philippine Cosplay, Alodia Gosengfiao, back for AsiaPop Comicon 2016. With her is Myrtle Sarrosa, the Big Winner of local reality-tv Pinoy Big Brother Teen Edition 4, and who’s now growing into the cosplay community winning awards and recognition for her cosplay work. The two will be part of the CAGE Cosplay Competition panel of judges. 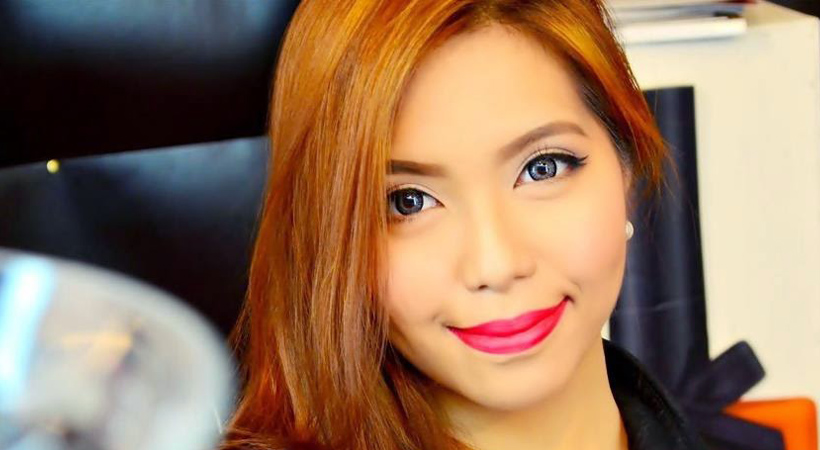 Adding to the list and diversifying the realm of geekery is renowned lifestyle and beauty vlogger, Say Tioco whose helpful tips and tutorials on makeup and hairstyling will benefit cosplayers at large.

If APCC 2015 is any indication, we’re willing to bet that this isn’t the last guest list update from Asia POP Comicon and more is in store for us in the coming days! 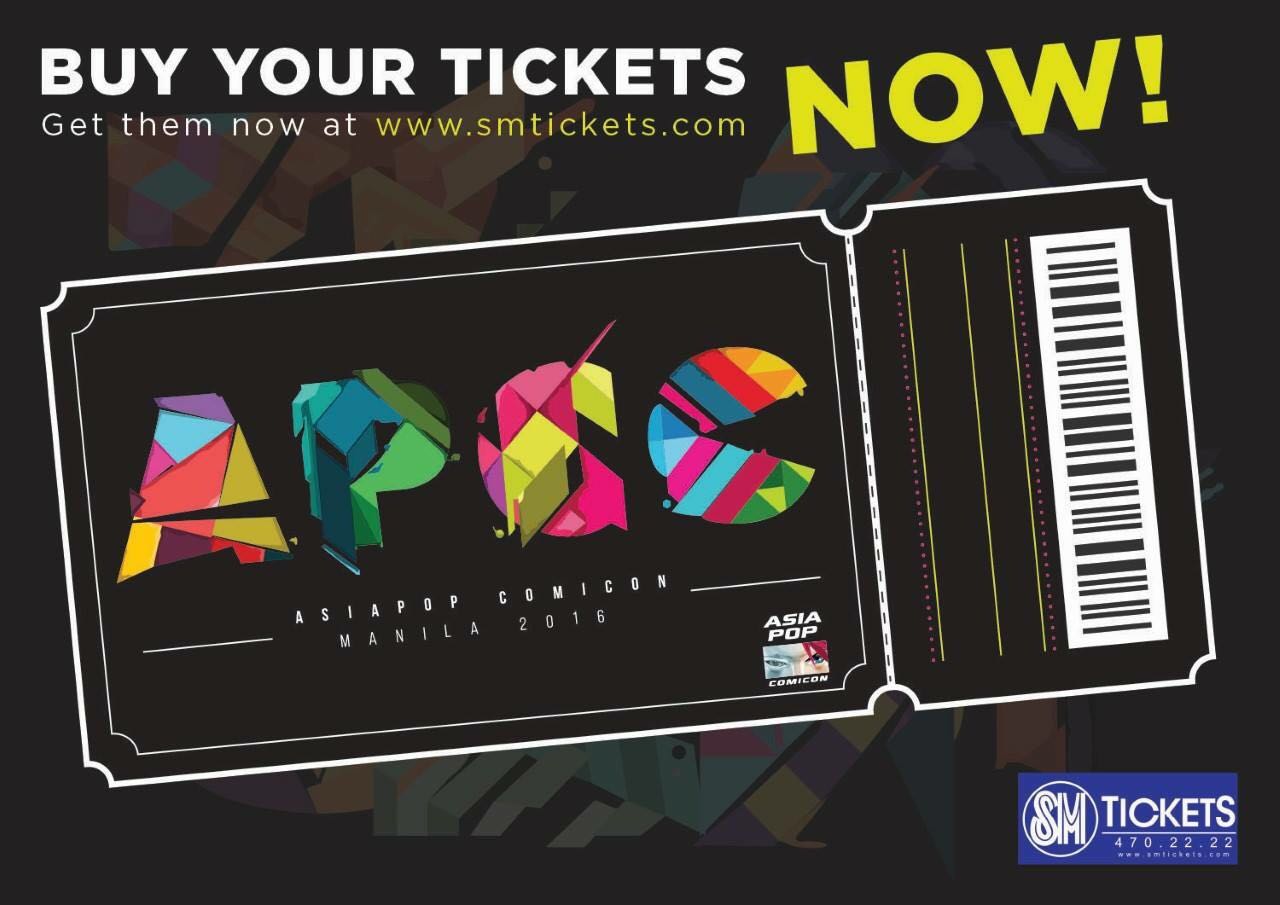 Get your tickets now for APCC Manila 2016! You can head over to any SM Ticketing outlets with ticket prices at PhP550 (one-day pass), PhP850 (two-day pass), and PhP1,050 (three-day pass). All these will give the ticketholder access to stage activities, performances, and the main show floor. The event is also free for children aged below six years for all days, but a valid identification is required for verification purposes before entering the show floor. 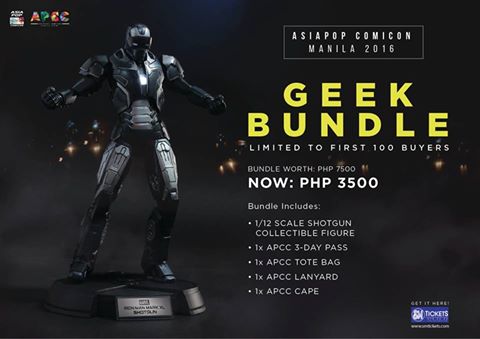 If you’re thoroughly hyped up for APCC 2016 and want to splurge a bit more, the organizers have a special treat for ya. APCC Manila 2016 is also offering to the FIRST 100 customers a special Geek Bundle, with an event lanyard, tote bag, cape, a 3-day pass, and a high-end 1/12 Iron Man Mark XL “Shotgun” armor from Comicave Studios for just php3500 (the package is worth Php 7,500 apparently). Seriously, we’re heavily considering getting one! I mean, look at that Iron Man figure! *drools*

If you want to get FREE tickets, well, we might have the cure for that as well. 😉 Stay tuned to Ungeek as we will be launching our APCC 2016 Free Ticket giveaway soon! (See, now there’s no reason for you not to attend!)

See you guys at the Con floor!

- Advertisement -
Previous article
Let the Overwatch 2016 Summer Games Begin! Check out the newest patch of Overwatch
Next article
Hold on to your Sanity, Arkham Horror the Card Game is coming!