Take a Look Inside the FUN-tastic Awesomeness of the Animax Carnival 2016! 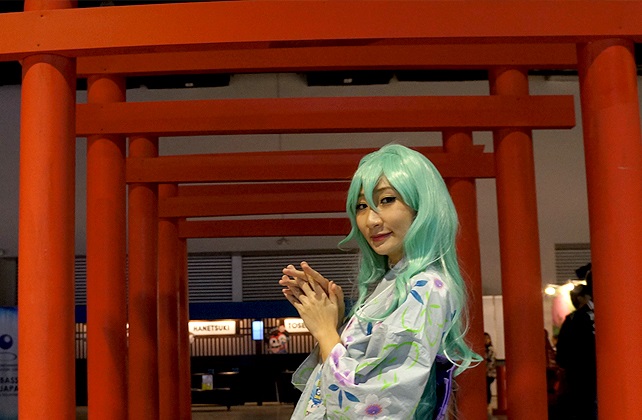 On its 6th year, Animax Carnival 2016 (ACPH 16) have served bigger and better FUNtastic event last October 15 and 16 at the SMX Convention Center Halls 1 and 2.

Animax brought the four seasons of Japan to be enjoyed by its attendees through various booths and activities. Notably, these includes the Edo traditional games, several Cosplay and sword-making workshops, having a chance to tryout Playstation 4 VR, the first-ever Maid Cafe, and celebrity performances and interviews in the Entertainment Hall.

The Animax City Stage is the place to be to catch the sponsors contests / segments and the several Cosplay and sword-making workshops.

In addition, located in the same hall, several sponsor booths could be found like UFC, MoguMogu, Toyota, Yuneoh, Cignal, and Sony.

Attendees got a treat of trying out several PS games at the Sony booth.

…. even the much-anticipated PlayStation VR games. Eager attendees lined up to try this one out!

Attendees could also treat themselves to shop-exclusive OO-Kun merchandise at the OO-Kun merch store. (so fluffy plushie!!)

The first 2,000 participants each day were able to get a prize by completing any three Edo traditional games.

Channeling their inner Japanese, attendees were also able to have their photo taken while wearing a Yukata (a light cotton kimono) with an obi sash, organized by the Japanese Embassy.

More fun booths and activities greeted us at the Animax City Summer Hall,.

Attendees were able to sing their heart out at the Oo-kun Karaoke,

… and get their creative juices flowing at the Oo-kun Creative Corner!

(Read more article about “Inside the Maid Cafe @ ACPH 16“)

and of course, the con experience is not complete with out its merchandise booths!

Both Day 1 and 2 of the Carnival, the Winter Entertainment Hall was packed with people as they enjoyed the Cosplay Competition Final Judging, celebrity interviews and performances of ELISA, yanaginagi, Ami Wajima, and May’n which were hosted by Rhianna Floresca and Glaiza De Castro.

Check-out this out, the concert of May’n at Day 2 of ACPH16 posted in her Facebook page

We are in the Phonic Nation󾌾󾬏Beautiful voices!!#lalala #concert #Philippines #acph16 #mayn

Such a FUN-tastic way to end the joyous festivity that was the Animax Carnival 2016.  See you next year!