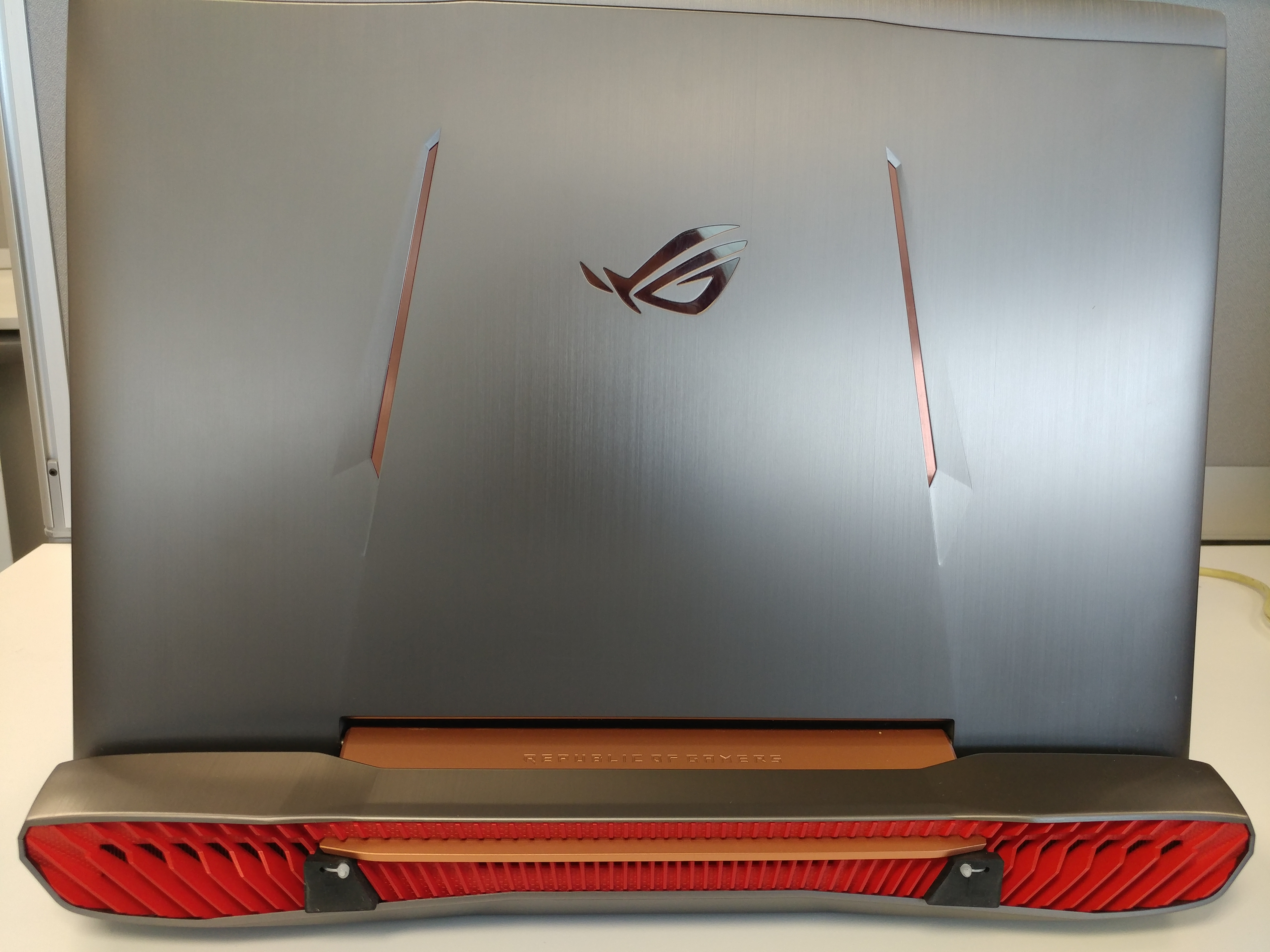 The ASUS ROG G752VS is one of the top-of-the-line gaming laptops currently out in the market today and luckily, the Ungeek.ph team was able to play around with this beast of a laptop over the Christmas break. Big shout out to Asus Republic of Gamers Philippines for giving us a reason to stay in over the holidays and game all day and all night! Did it live up to the hype or was it just “another gaming laptop”? Read on to see how it stacks up to the gaming demands of the team.

This is one huge gaming laptop or notebook with 12.7 inches in length, 16.4 inches in width and 1.9 inch in thickness. You can imagine it being a little bit smaller than an A3-Sized Poster. In the photo, you may notice how the Mac Book Pro 13″ looks like a “hobbit” beside the G752VS. This thing is HUGE, something I would not recommend lugging around everyday, especially if you commute over long distances. 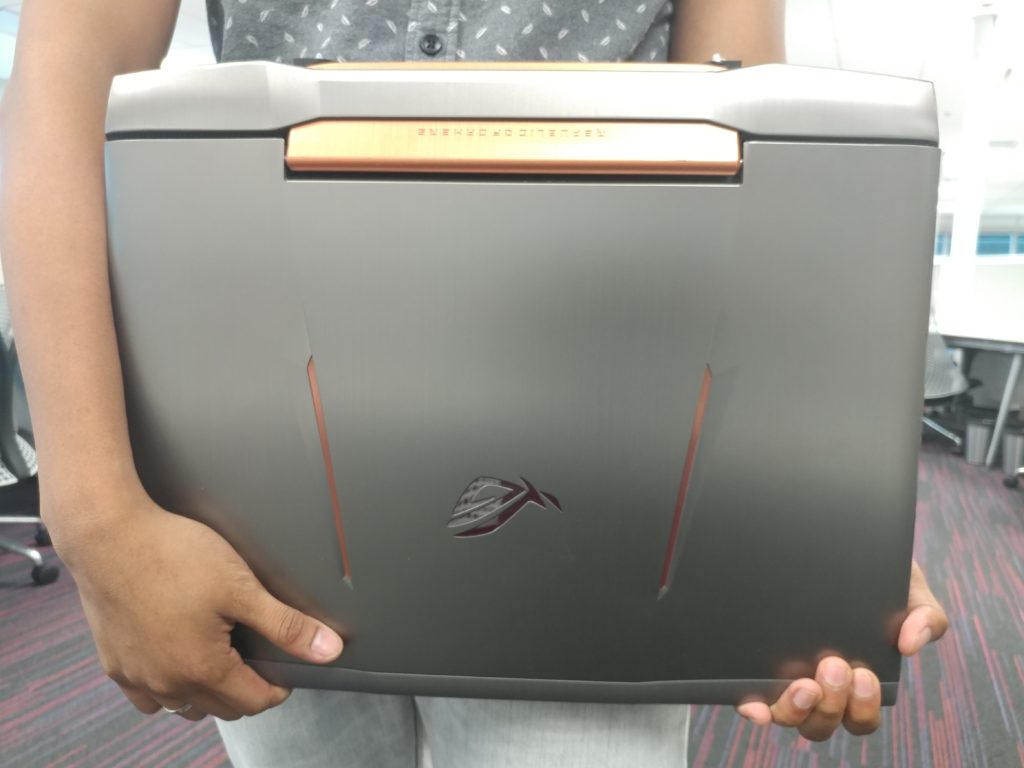 Also, the ASUS ROG G752VS is quite a heavy, weighing 4.51 KG (9.94 LBS) — but what gaming laptop isn’t? It also comes with a bulky charger which weights around 800g so if you plan on taking this out for a gaming session, better limber up and do some stretching exercises because this will require effort to bring around, especially if you are used to thinner laptops like the macbook pro.

The ASUS ROG G752VS chassis is mostly aluminum and plastic, with an Armor Titanium and Plasma Copper color scheme finish, giving a very sleek and metallic vibe. The back of the laptop lid is embossed with ASUS ROG logo, and it is accented by the red LED stripes that is lit-up on each side. The finish is smooth and feels very premium but it still prone to hairline scratches.

Just below the lid is the unique design of exhaust vents, which has dust-release vents to keep dust away from internal components. The dust channels are protected by rubber plugs one on each side, that should be unplugged or removed when the system is in use. Covering the channels prevents particles from sneaking into the blowers when there is no airflow.

The ASUS ROG G752VS has good distribution for peripheral connectivity. It has four (4) USB 3.0 ports located two on each side, and a USB 3.1 Type Port with Intel’s Thunderbolt 3 on the right side which can transfer files up to 40Gbits/s – four times the bandwidth of USB 3.1. One of the USB 3.0 on the right side will work even the notebook is on sleep mode, which you can use to charge your USB-powered gadgets.

The left side also includes a Blu-ray DVD Writer, a SD Card reader, and a Kensington Lock, while the right side houses the power connector, a port each for microphone, speakers or headphones, and an audio line out.  In addition, this side also includes 1 Gigabit Ethernet port (RJ45 LAN port), and 1 HDMI 2.0 mini display port.

Up top, you would notice a see-through panel for the fans which G752VS features the ROG-exclusive 3D Vapor Chamber which creates an efficient cooling system that helps decrease GPU temperature by up to 7°C.  The 3D Vapor Chamber is filled with coolant that, when heated, change phases from a liquid to a gas and back again, thus provides stable and evenly spread temperatures on all of its surfaces, regardless of the location and density of the heat source below the chamber base. If there is one complaint about gaming laptops, it would be that the heat-distribution / cooling system is not well made to handle the power the laptop generates but as with most ROG laptops, the attention to detail is very apparent and their cooling system is one of the better ones out there across gaming laptop brands.

For maintenance and upgrade, you can easily access the RAM, HDD and SDD by loosening a screw to open the maintenance hatch.

G752VS is also equipped with Sonic Bass Woofer that can be found at the lower right hand corner of the back panel. Speakers are located at the back of hinge G752VS top lid.

We tested out the sound system with a couple of Spotify songs with Daft Punk – Get Lucky, Cee Lo Green – Bright Lights Bigger City, Claude Debussy – Claire de Lune, and finally an audio track of a fireplace crackling. The output a bit average, not that impressive particularly with the bass, and crisp of sounds. It was ok at low level volumes but as with most laptops out there, turning the levels up does result in less than average output.

The hinges are sturdy which properly holds the desired position of the display screen.

When you open the ASUS ROG G752VS you will definitely notice the 17.3-inch (43.94 cm) display with Anti-Glare Panel (178-degree viewing angle) and NVIDIA G-Sync. G752VS can support up to 4K UHD (3840 x 2160) resolution which is awesome not just for gaming, but also for movie night sessions! The NVIDIA G-Sync helps avoid lag, minimizes perceived stutter, and eliminates visual tearing particularly in gaming.

In addition, the smooth black matte finish surrounds the keyboard and touchpad, with portions of aluminum on the top and each side of the notebook. Of course, the right side also includes an embossed logo of ASUS ROG.

The power button shaped like an obtuse triangle is located at the upper right corner, and it lit-ups when it notebook is turned on. Several geometric etching surrounds the left side of the button for aesthetics.

Popular to most gaming notebooks, the matte finish is prone to dirt and smudges which later requires frequent cleaning. So be warned, no oily finger tips!

The ASUS ROG G752VS features ergonomically-designed QWERTY keyboard, and a numeric keypad, with each keys marked with red label, and having a 2.5mm of key travel when you press it which is very ideal for gaming. The keyboard is powered by anti-ghosting keys ensure you responsiveness and accurate interpretation of the commands – even if you hit up to 30 keys simultaneously. Also, the isolated arrow keys provide a desktop-like gaming experience.

Both the QWERTY keyboard and numeric keypad are backlit in red helped a lot when gaming in the dark to see the keys easier. Unfortunately, there are no other colors to choose for the backlight, you are stuck with the red illumination, which is not bad by any means, we would have just appreciated more colors.

ASUS ROG G752VS also features macro keys for one for live streaming, and other 5 keys which you can configure at the ASUS ROG Gaming Center for your gaming and productivity needs.

In addition, ASUS ROG G752VS includes a spacious 3 x 5-inch touchpad with left and right buttons just below it. G752VS support multiple touchpad gestures such as dragging and pinch-to-zoom. Often than not, you might just disable the touchpad, and use a external gaming mouse.

The ASUS ROG G752VS is powered by Intel Quad Core i7-6820HK (2.7GHz, can be overclocked up to 4GHz), and it is equipped with the line top-up NVIDIA GeForce GTX 1070 GPU with 8GB memory and Pascal architecture that delivers game-changing innovations with VR.  The G752 comes with WINDOWS 10 (64 bit).

We were able to test out playing Overwatch, Heroes of the Storm, Rise of Tomb Raider, and StarWars Battlefront and got an average of 60 to 70 FPS, while set in max (3840 x 2160) resolution. The transition from frame to frame is buttery smooth and no trace of lag whatsoever!

Storage speeds can greatly affect gameplay performance, and this is possible with the 256GB M.2 PCIe NVMe Solid State Drive which is 4x faster over SATA-based drives. Thus, the boot-up sequence for G752VS was only somewhere between 10-20 seconds up to Windows 10 home screen. Impressive!

G752VS is also equipped with 32GB DDR4 RAM (can be expanded to 64GB), and one Terrabyte 7200 RPM HDD which provides the user a LOT of space to store those games and… uh… educational materials. 🙂

G752VS comes with a powerful battery rated at 88WHrs, 8 cell Li-ion Battery Pack which is good for 3.5hrs running time. While 3.5 hours running time is actually pretty pathetic if you were gaming on the go, you would expect as much since this laptop packs so much power under the hood and it was really meant to be used while plugged in.

G752 also comes with a pre-installed ROG Gaming Center which allows you to easily configure the CPU, GPU, RAM and other settings, and save it up to four (4) different presets or profiles. This would be very useful in configuring overclocking of components based on different games you play.

The ASUS G752VS is indeed a solid and highly capable gaming notebook. It offers twice the power and performance with the combination of the Intel  i7 Quad Core i7-6820HK, GTX 1070 and the fast storage solutions than most gaming laptops currently in the market.

Definitely, G752VS is a good candidate for a somewhat top-tier desktop replacement. The price might be glaring with a whooping PHP 179,000, but is understandable given with the power and performance it offers for gaming, video editing, large canvass layouts, and 3D rendering is absolutely BEASTLY!

Read more about ASUS ROG with our past articles:

- Advertisement -
Previous articleThe Video Game Movie Curse: Do we need an Uncharted Movie?
Next articleRazer celebrates another CES win with a 50%-off SALE!