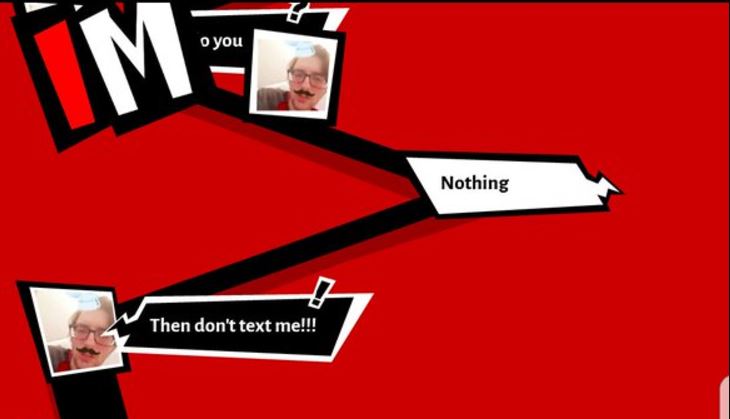 Have you ever thought to yourself that you need to add more Persona 5 flavor to your life? So much so that you listen to the OST of P5 on loop and want to buy / have bought various P5 Merchandise? If you have, GOOD NEWS! Twitter user Nick (@alfredbulbasaur) is working on an SMS app that gives you the same messenger interface as the in-game one in Persona 5 and it looks SO. DAMN. GOOD!

Nick seems to be working to get this app out for everyone and I PERSONALLY CAN’T WAIT. Because Persona. Hence I need it! @___@ Although, we’re not quite sure yet if he’s making this for both iOS and Android.

Still making progress on my #Persona5 text messaging app. added in the different format for the sent messages and the zig zag shadow thingy! pic.twitter.com/CqNFidDu0A

Just a few hours ago, he tweeted that he’s been working on alternative backgrounds for the app as well.

also, fancied a bit of a play around so say hello to 8 additional colour schemes! #Persona5 pic.twitter.com/fb3UonqSjo

Until it’s finally out, we’ll be keeping a VERY CLOSE EYE on this! Either check out Nick’s Twitter Page or you can also check back here in UnGeek for any further developments. Otherwise, you’ll never see it COMIIIIIIIIIINNNNNGGGGGGG!!