Marvel vs. Capcom: Infinite Producers Tomoaki Ayano and Kansuke Sakurai bring a Sneak Peek of the Game to the PH! 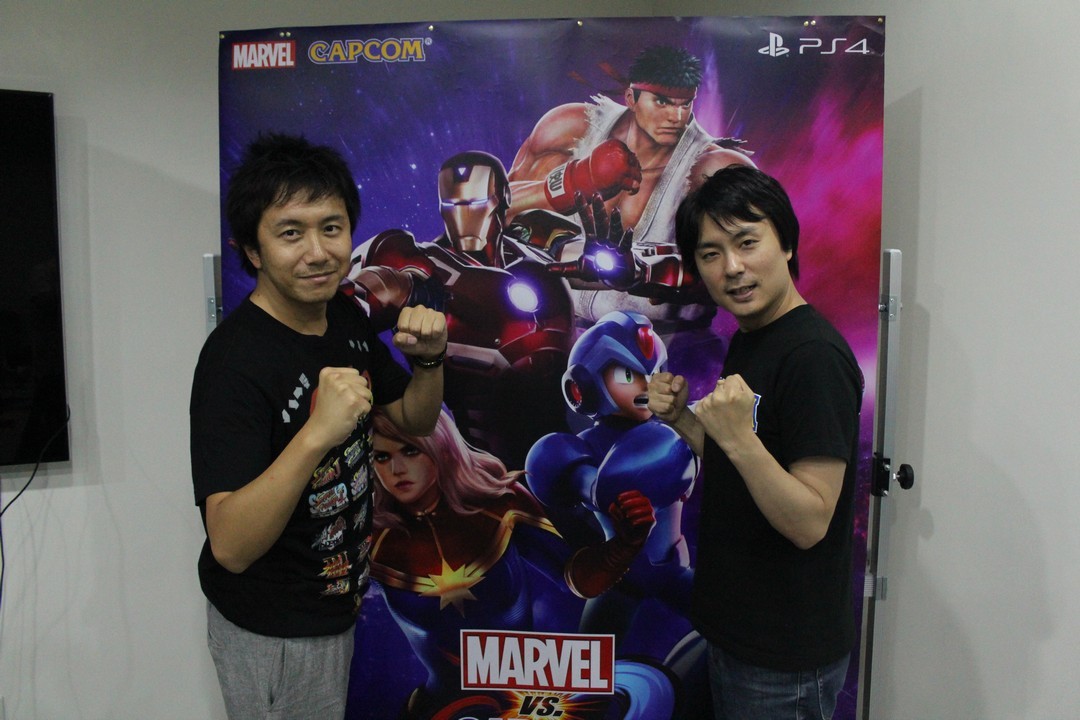 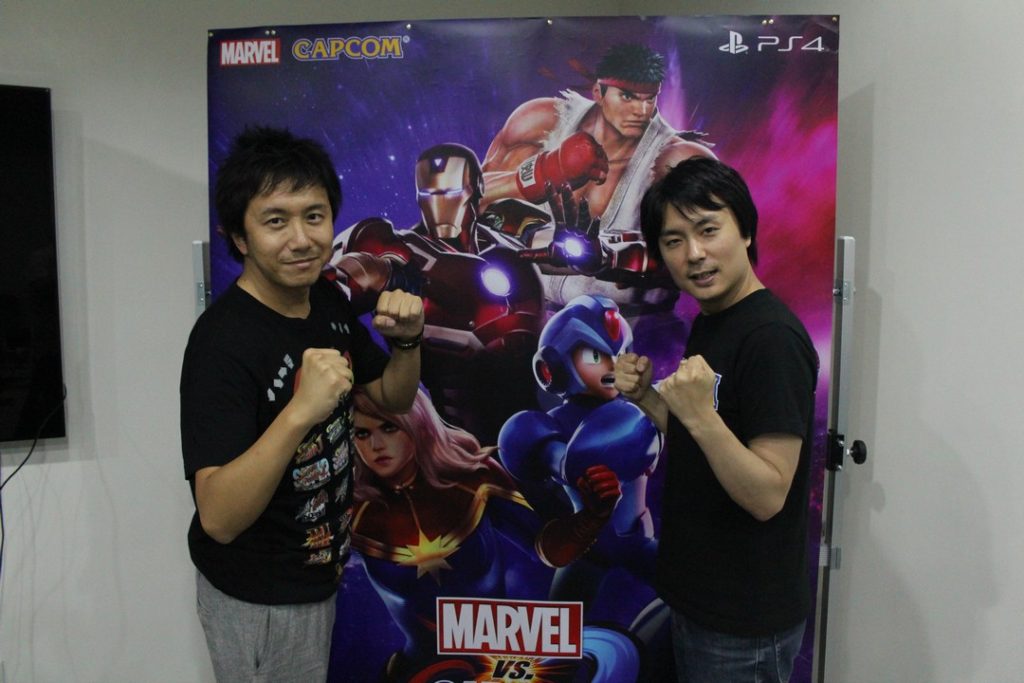 During PSX Southeast Asia, Promotions Producer Tomoaki Ayano and Assistant Producer Kansuke Sakurai held a presentation and talked about Marvel vs Capcom: Infinite, the hotly-anticipated next installment to the long-running Marvel vs. Capcom series. 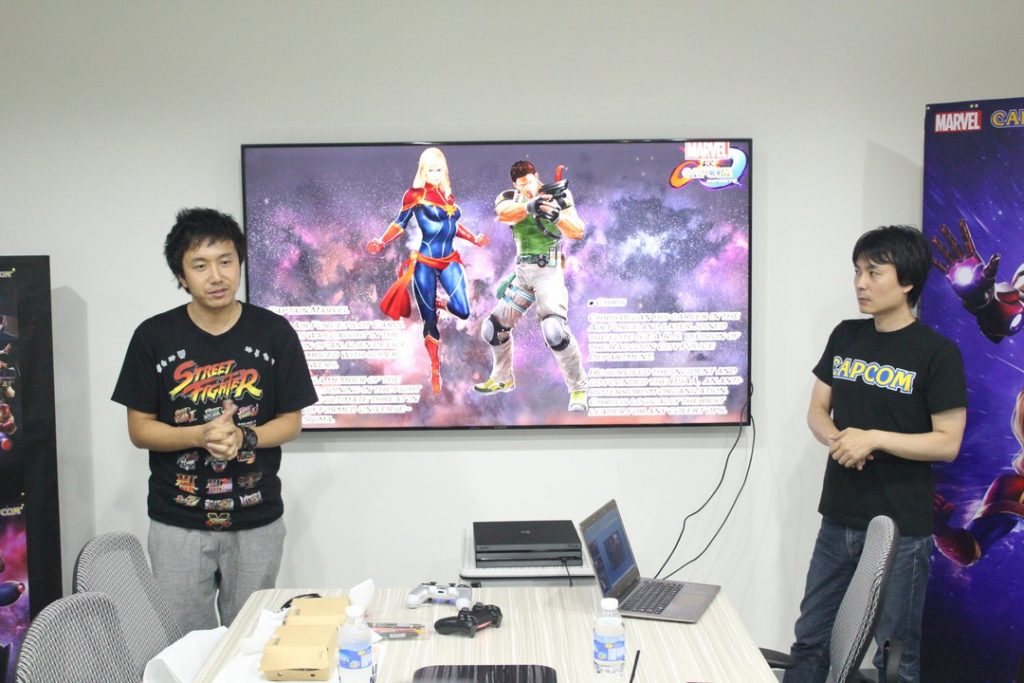 Just days after (last August 9 specifically), the two producers from Capcom, in partnership with Datablitz, flew in to Manila all the way from Japan to present Infinite; but this time, they let the media have a go at the game. Yes, I got to try it – and yes, it was awesome!

For the unfamiliar, Marvel vs. Capcom: Infinite is the next major installment in the franchise after 2011’s Ultimate Marvel vs. Capcom 3. Infinite once again features a playable roster consisting of Marvel heroes and characters from Capcom’s different video game franchises. 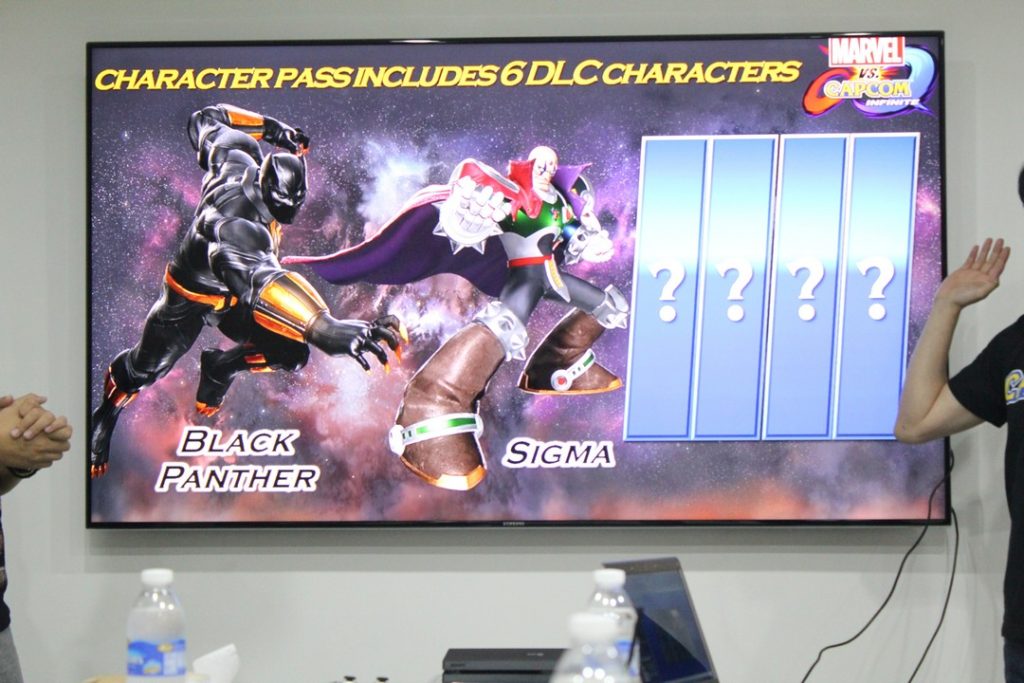 While the full roster is yet to be announced, 26 characters are confirmed for the base game. Two characters – Black Panther and Sigma, were announced as future DLC characters, and they’ll be available with the purchase of a Character Pass.

During the presentation, the producers highlighted several characters such as series regulars Ryu and Spider-Man (who is a personal favorite of Kansuka Sakurai), as well as the new faces in the series such as Captain Marvel (the character of choice for Tomoaki Ayano). 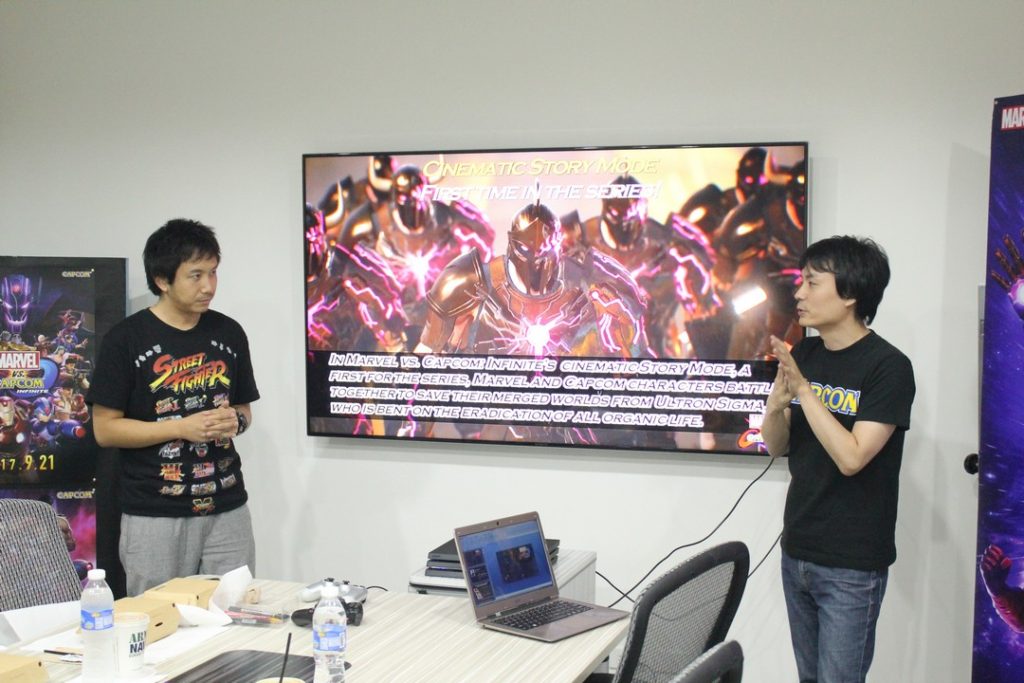 A series first, Infinite will feature a Cinematic Story Mode; no doubt being inspired by the success of the Marvel Cinematic Universe. The story is about the heroes of Marvel and Capcom battling against Ultron Sigma – who is, as you guessed, the fusion of Marvel’s Ultron and Mega Man’s Sigma. 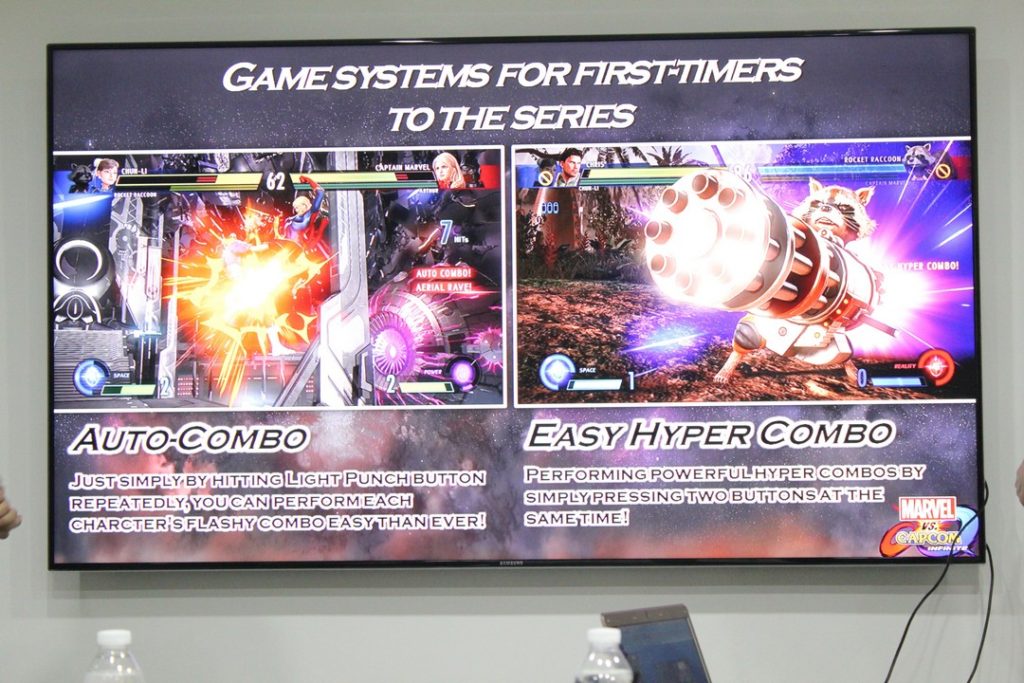 Gameplay-wise, the developers aimed for Infinite to be more accessible for those with little to no fighting game experience (or maybe they just made the game easier to pick-up for fgc noobs like me). Two new features were introduced in the game for newbies, the Auto Combo and the Easy Hyper Combo. 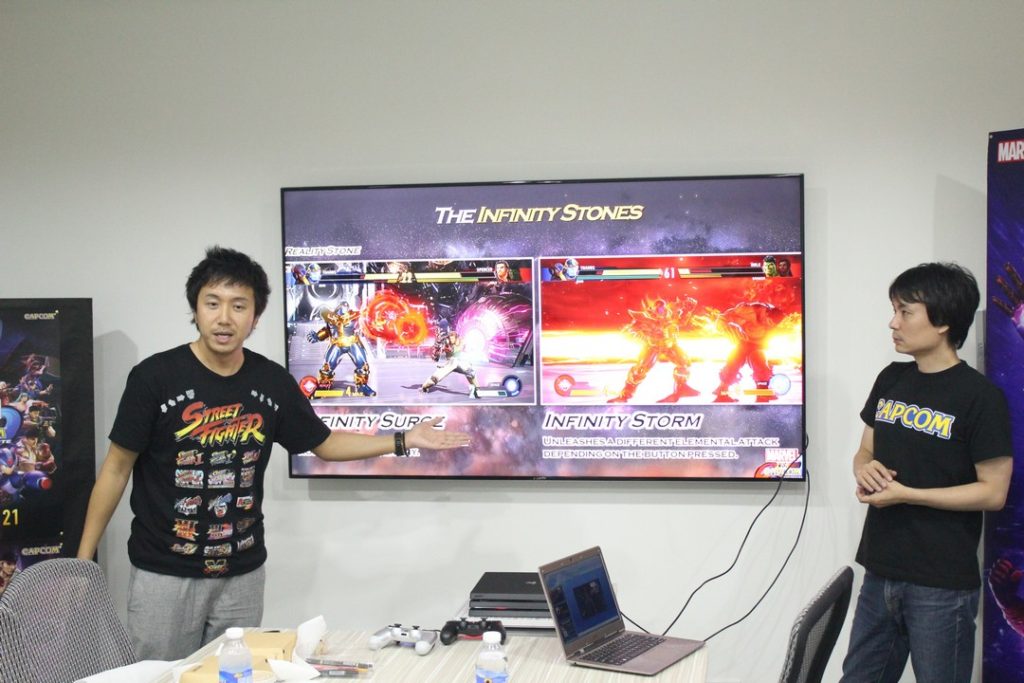 Though if you’re a hardcore fighting gamer who scoffs at casuals and their filthy ways, there’s no need to fret. These features can be turned off for one or both players. This means that you can play with a noob and still have fun, or vice versa. And there’s also the Infinity Stone mechanic which adds a layer of complexity to Infinite.

Simply put, each player can equip an Infinity Stone which gives an Infinity Surge and Infinity Stor. Surge is a fairly powerful attack that consumes a bit of your infinity meter, while Storm is a sort of “ultimate” that needs around half of your meter to activate. Each of the five stones in the game have different Surges and Storms. 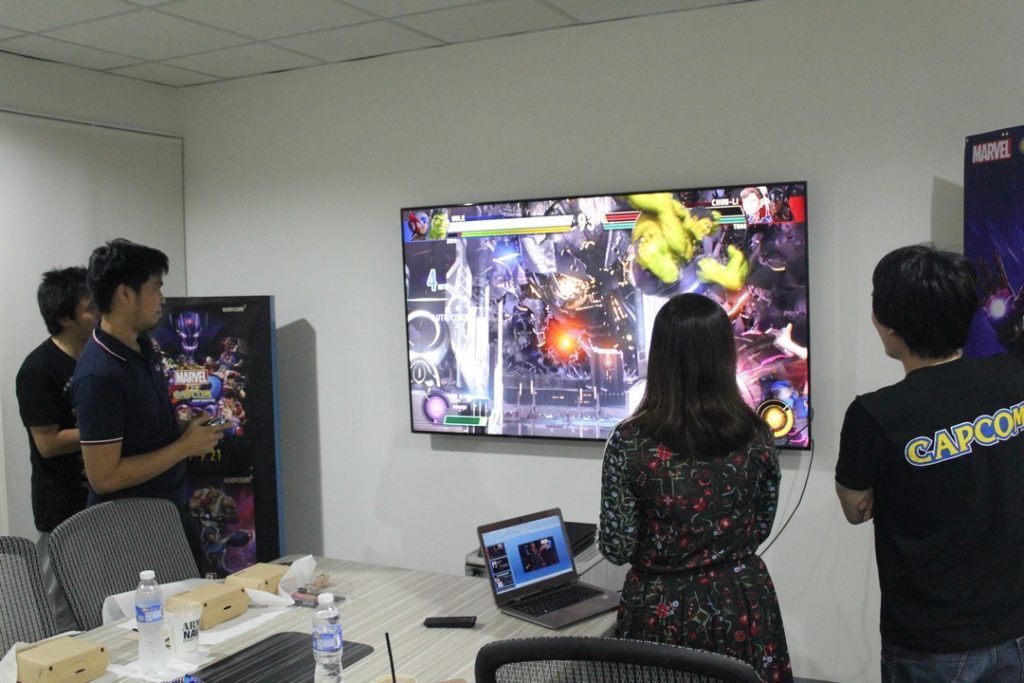 After laying down the info above to us, we were then given a chance to try out Infinite in a 1v1 match-up. I didn’t expect to be wowed, as I am a self-confessed fgc noob. But when I gave the game a go, it was a lot of fun! And I even won! The Infinity Stone mechanic along with character switching still meant that players had to think about what to do; but with the Auto and Easy Hyper Combos, the game is very accessible to newbies without sacrificing game depth. 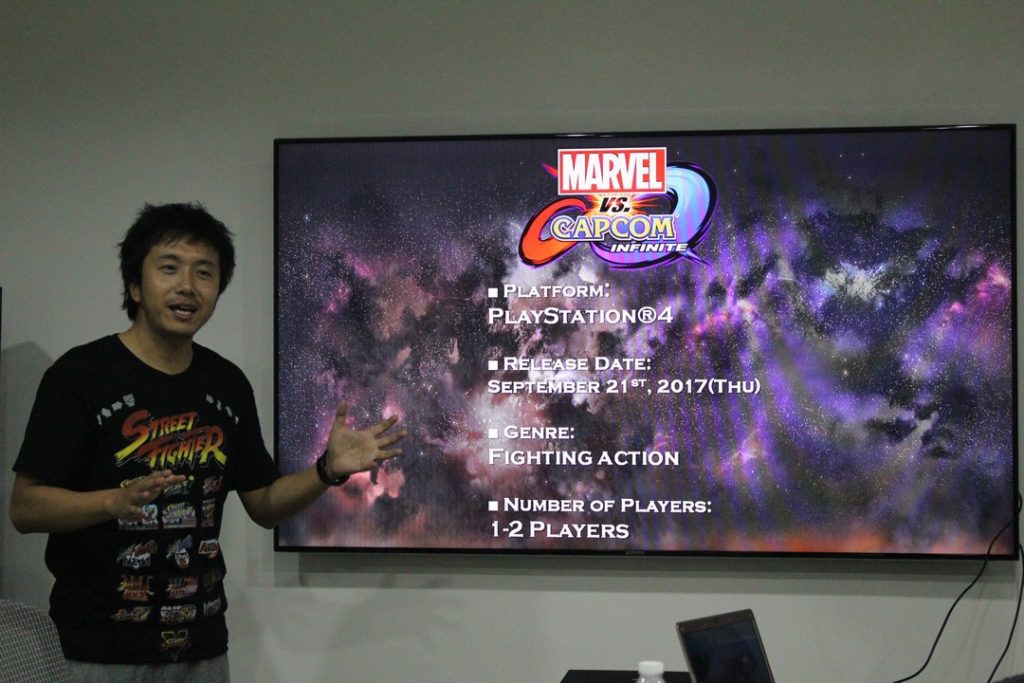 - Advertisement -
Previous article
Be a Hero in this “DARNA” Card Game, or Just Swallow Something Random! | History Con 2017 Highlights
Next article
The Toughest Honey you can find was spotted in HCon 2017!