BLEND IN OR STAND OUT? A CLOSER LOOK INTO THE MSI GE62VR 7RF CAMO SQUAD

War. War never changes. Or so it seems. 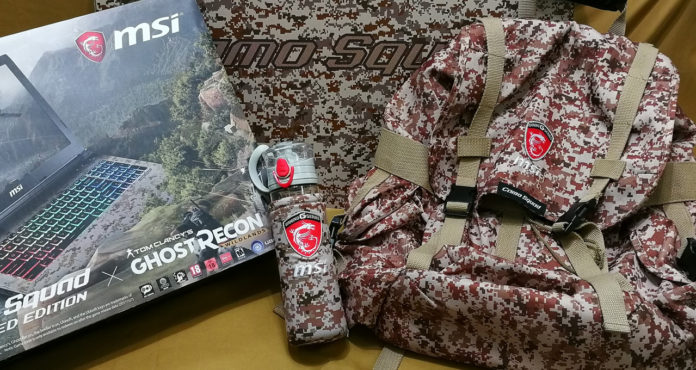 When it comes to gaming laptops, a costly interior usually isn’t enough. Coolness factor comes into play and nothing says cool than standing out. It’s for this reason that most limited-edition releases are priced a bit more than their regular counterparts; but how much more expensive would you pay for something that’s differently skinned? We’ll, that really depends on you and how much you value design.

We’ll skip the usual run down of specs since a lot of gadget and gaming sites have already talked about this extensively. Our sister-site Unbox has done 2 wonderful unboxing and reviews of the units as it is and we’ll reference them from time to time in this article. What we want to weigh-in on is the overall gaming experience and if the Camo Squad has the coolness factor to merit a purchase from you. 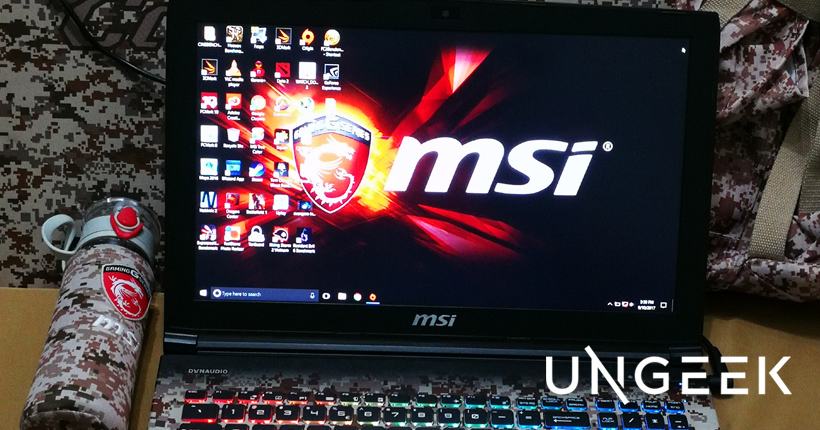 Gaming notebooks are rapidly becoming more and more popular as devices are becoming more and more affordable (relatively speaking) and gaming demands become higher and higher. These machines are fitted with the latest NVDIA Graphics Card and souped-up with faster hard disk, memory and packaged with probably the most annoying trend in the pc gaming realm over the past half-decade – the RGB lighting.

That being said, the MSI GE62VR Apache Pro Camo Squad edition took a far different approach in differentiating themselves and they added more than a fancy skin to their promotion as well. 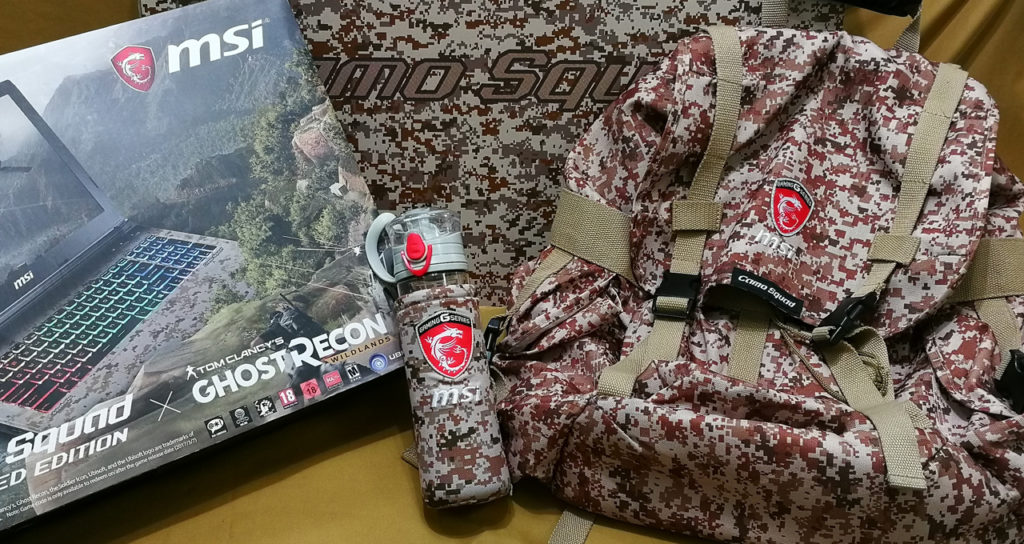 I must admit, the US Marine MARPAT Desert Camo pattern was a great choice as it conveys a modern/urban impression with geeky flair (pixel-ish motifs). Colors are light enough that they can easily blend with your other gadgets and pattern isn’t all that ostentatious to annoyingly sticks out. It’s different but well balanced, and we’re a huge fan of the low-key pabayang.

Let’s talk about the packaging first. For a 15.6” laptop, the packaging on the MSI GE62VR Apache Pro Camo Squad is enormous! That’s probably because the whole set comes with a load of custom-freebies. The most notable among these would be the Desert Camo tactical backpack. While the fabric seems a little too thin for my taste, the bag is equipped with a soft padding for you to carry the laptop comfortably. 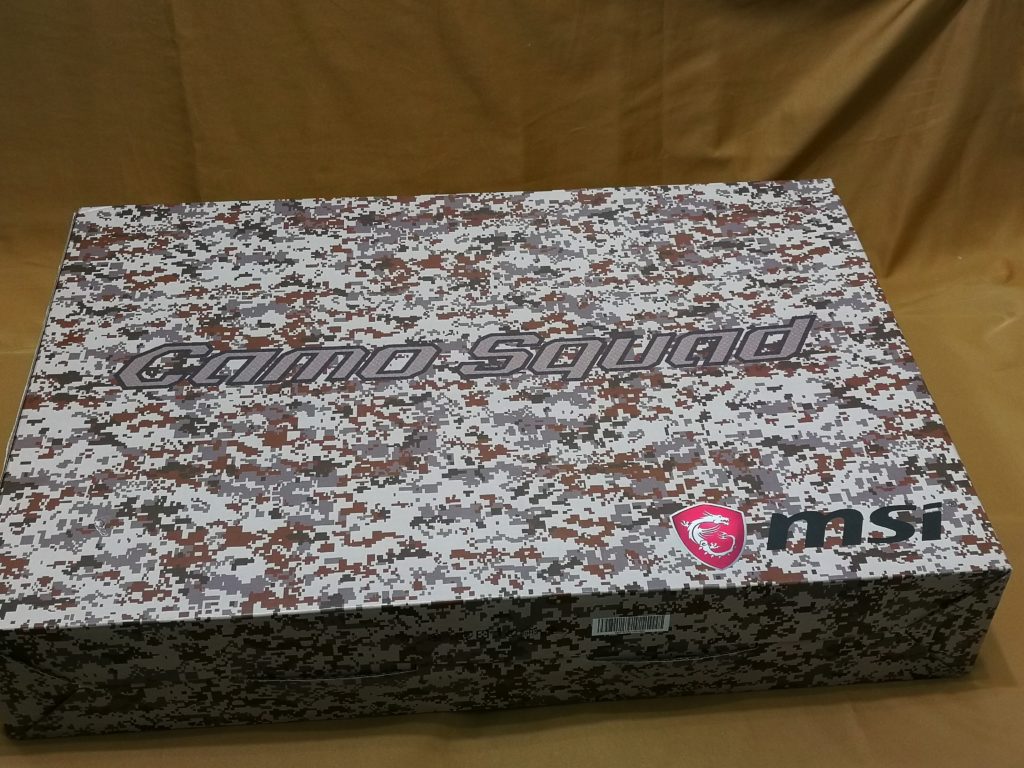 We went around the malls carrying the unit and all the peripherals and for a guy who has a slight scoliosis on his upper lumbar, I have to say, the Camo Squad carrying bag didn’t give my back much of a problem. Weight was evenly distributed and I look bad-ass with my military-esque looking gear behind my back. Plus points on coolness factor! 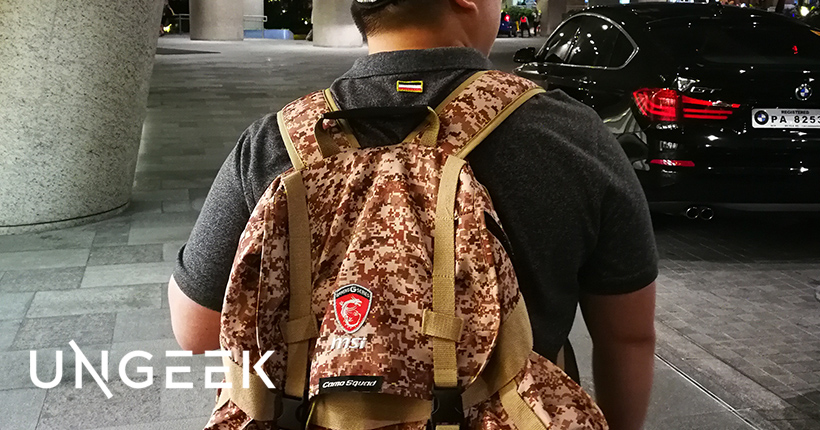 As if that isn’t enough, MSI throws in a couple more themed items into the mix. There’s the small water bottle/ tumbler and the MSI Camo dog tags to boot. When MSI first announced the Camo Squad sometime around April of this year, they were giving away Camo Squad shirts if you pre-order. Still, even without the Camo Squad shirt, that’s a whole lot of themed freebies for ya! 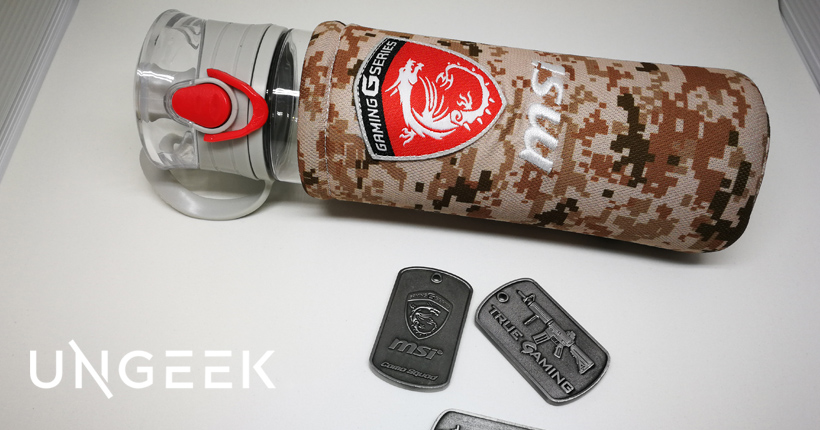 Going into the laptop itself, the camo design is sprawled through the device. The monitor’s back panel is perhaps the one with the most design real-estate but that doesn’t mean the camo motif is left once the laptop has been opened. The desert camo motif has been skinned on the inside as well mapping in between the SteelSeries-produced keypads. 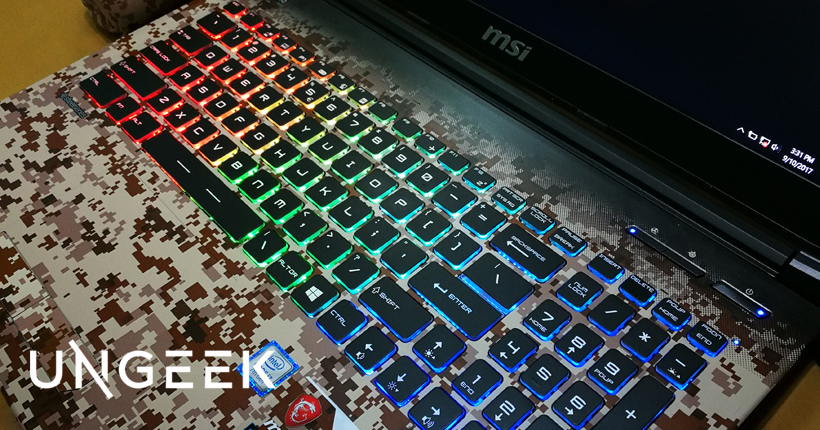 The camo design probably did the job a little too well as the trackpad, while having a different texture grade, seems to disappear out of sight on first glace. It’s there, folks, don’t worry. 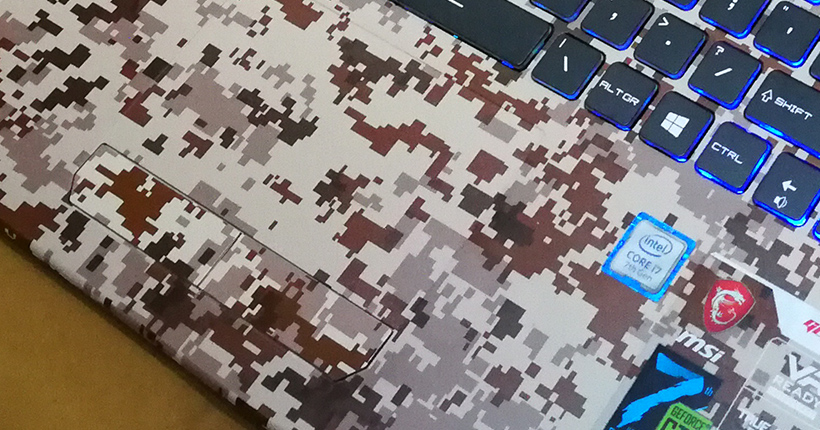 If at all the only downside to a really amazing design skin is the material used for it. For a military-esque designed peripheral, you’d at least think MSI would re-case the entire GE62VR 7RF in aluminum. Sadly, they used hardened plastic (and it is plastic you can feel). Still, if anything, the material could have contributed to the unit’s below 3kg weight. So, there is that to consider.

Launched earlier this year, the MSI GE62VR Apache Pro Camo Squad is equipped with NVIDIA’s 10-series GPU. There are two options for you to choose from: a slightly cheaper 1050Ti-fitted notebook or a 1060 one. We were able to try on the 1060 variant for a few days before we left for Tokyo Game Show. 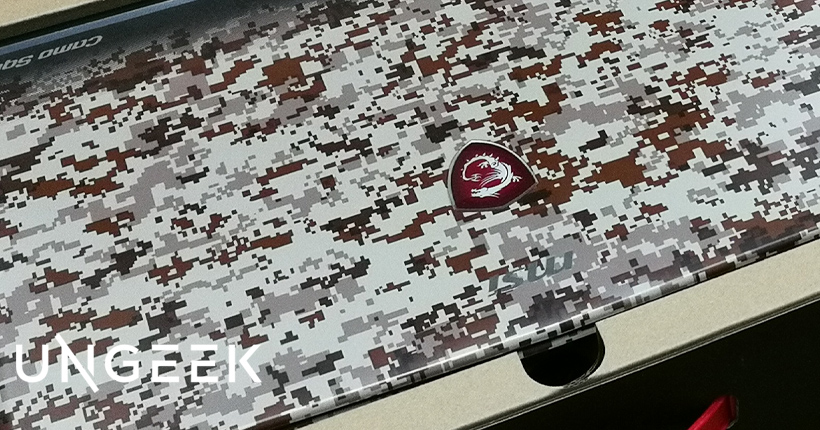 And while it was able to run majority of the games we throw at it (almost all in stunning ultra), it does come with a bit of mishaps. 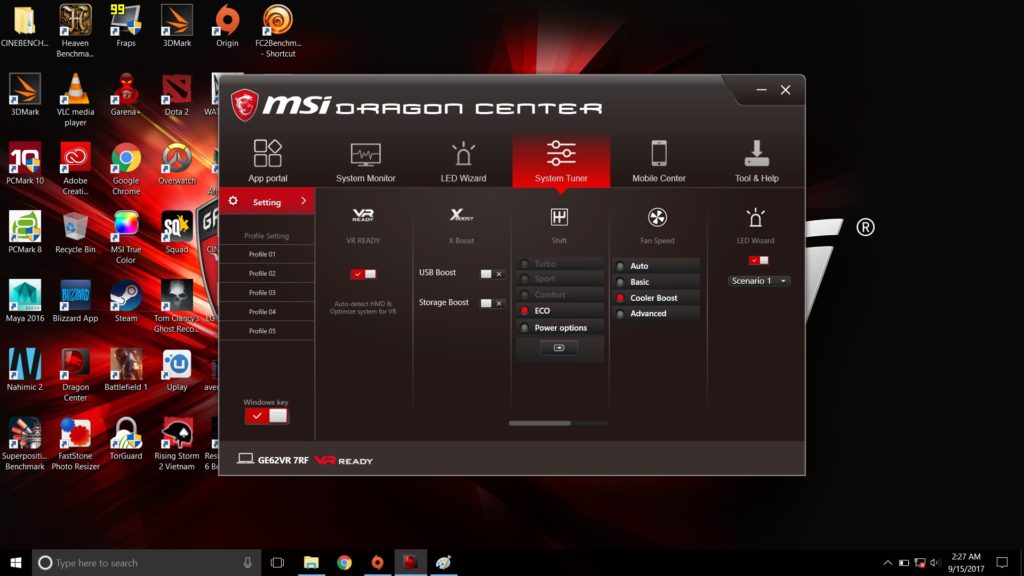 While heating on gaming laptops isn’t a new concept, we found that the GE62VR 7RF heats up faster than most of the gaming laptops we’ve used. We’ve calibrated the settings to ensure stronger fans (we clicked the Cooler Boost) and while it helped a bit, it didn’t really alleviate much of the heat as we wanted.

For a laptop that has around 16G of DDR4, and a 256 SSD, the GE62VR 7RF boots remarkably slow. This might be a function of the review unit sent (and we hope it is) but if it’s not then we have a problem. For a machine that’s anywhere from 90k-110k, I would want it to function as quick and as fast as that much money can provide. Sadly, it did not. Boot time took about a minute to a minute and a half. We checked behind the curtain to see what could potentially be its problem and assumed that the laptop has a lot of programs working on startup – eating up resources like anything. 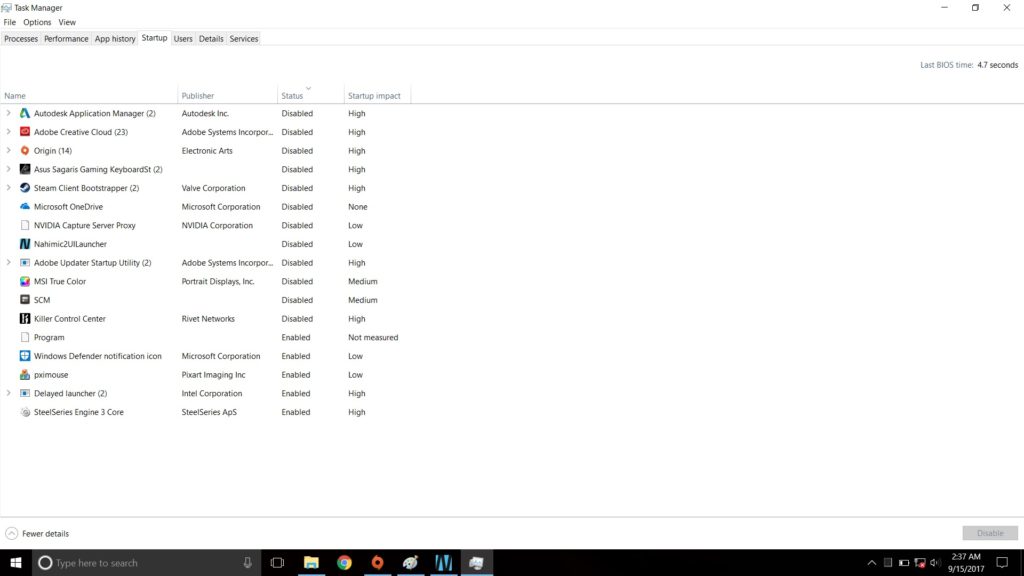 There’s quite a bit of bloatware being thrown here and there that we wish MSI just opted not to. Still, even with all these hiccups, the GE62VR 7RF is an aesthetically pleasing machine which tips a lot on the coolness scale. Can I recommend this to people? I’m be remiss if I say it’s for all. With a hefty price tag of Php 89,995 (now on sale for Php 84,995) for the 1050Ti variant and a whopping Php 109,995 for the 1060 variant, the notebook will appeal to those who either a) is into military-designed anything or b) those who just want something totally left field and do not want to conform with the norms.

For more on the GE62VR 7RF check these other articles out:

Get lost in the Game with MSI’s Limited Edition Camo Squad Pack!

- Advertisement -
Previous article
ASUS Announces the ROG Premium Care for Gaming Laptops
Next article
Gaming Library’s Flagship Event is BACK! | All aBoard 2.0 Highlights