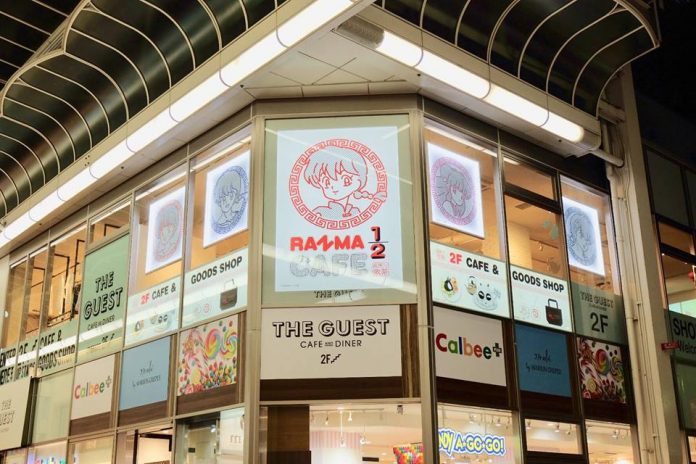 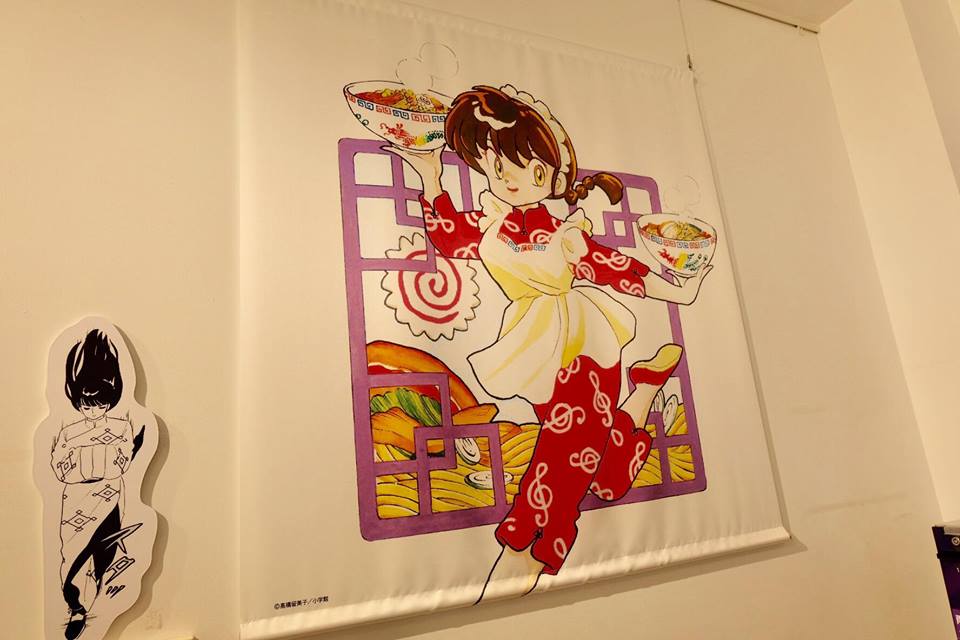 Last week my sister and her boyfriend had the chance to visit the Ranma ½ Café located in Osaka, Japan. They sent me pictures just to make me feel bad that I wasn’t there, which I have to say it worked. 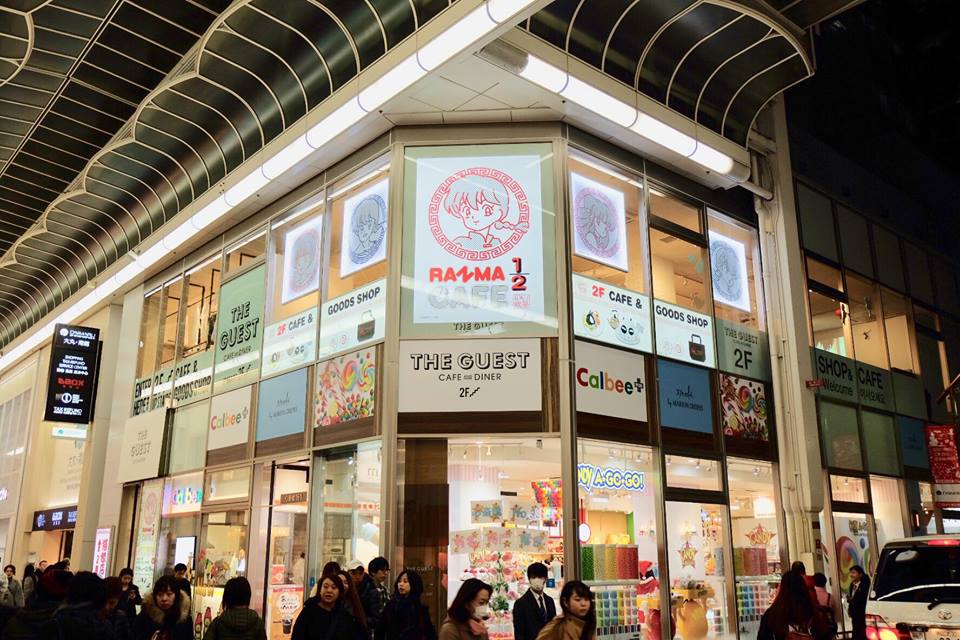 Conveniently the area is just a stone’s throw from their hotel so it only took a short walk. Here’s a shot of the front.

Originally called the The Guest Café, occasionally the restaurant reinvents itself into iconic Japanese pop culture references, and this this time around it collaborated with Rumiko Takahashi’s beloved Ranma ½ series. 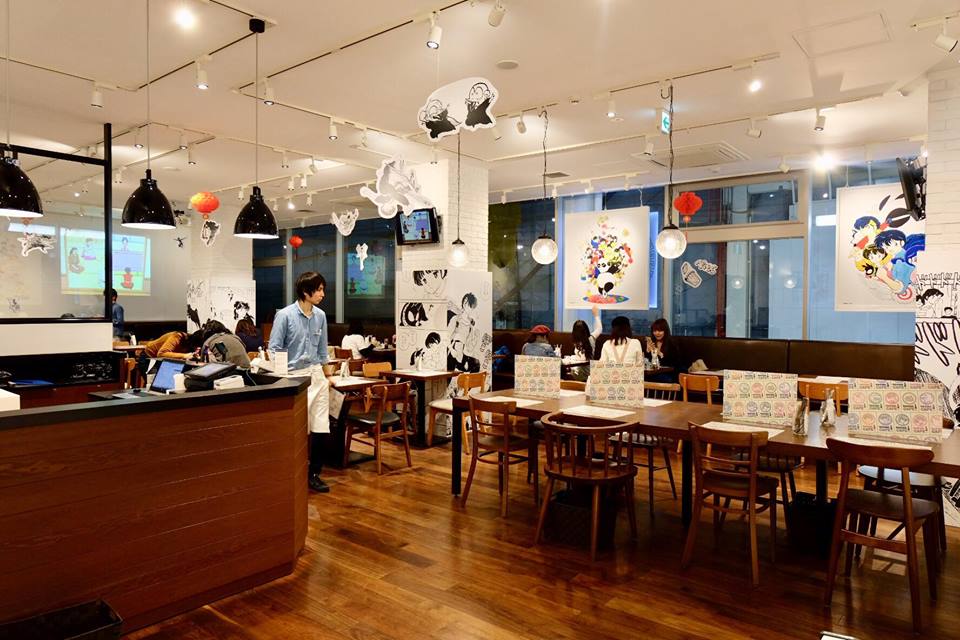 Right from the get-go the place is dripping with everything Ranma-related. 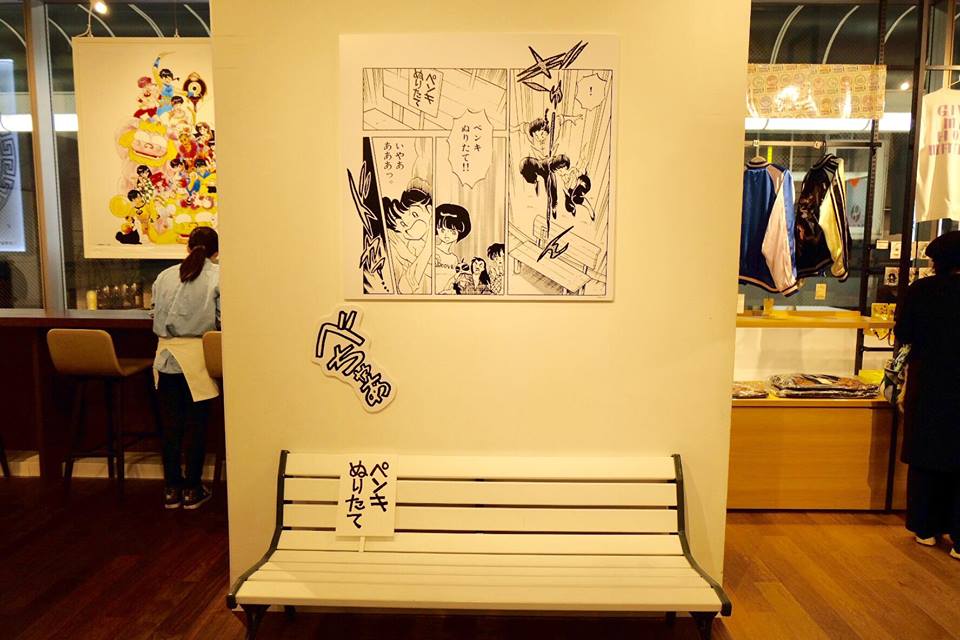 As you can see, the walls and furniture have a generous amount of Rumiko’s trademark art form. Even the benches and have a little something that takes you back to the franchise’s rich lore. 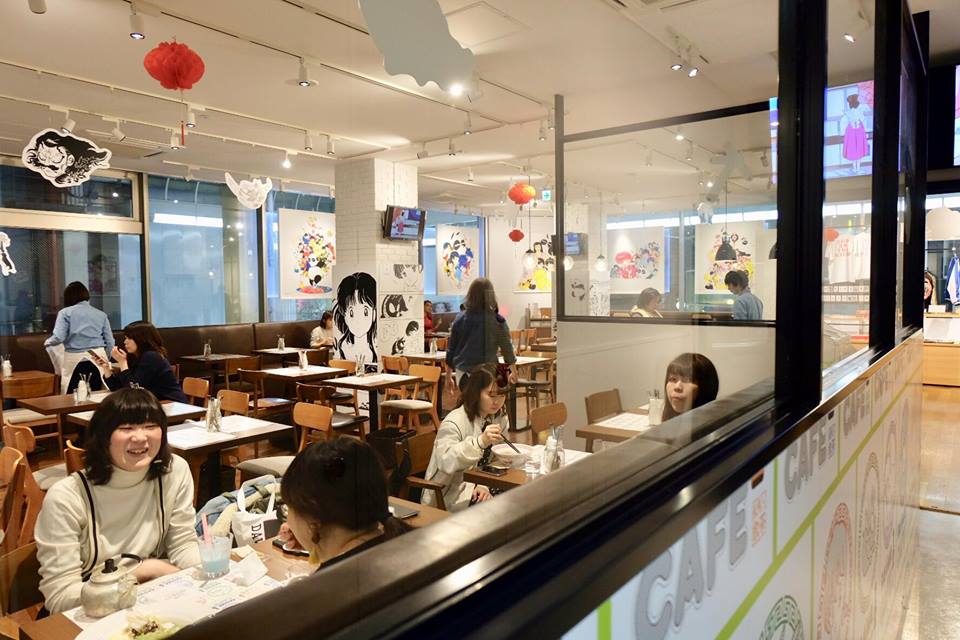 For those who miss watching the show, there are flat screen situated in key areas, which in turns provide the cheerful and light-hearted ambience of the place.

Before we move on to the food, here are some more pics of the café: 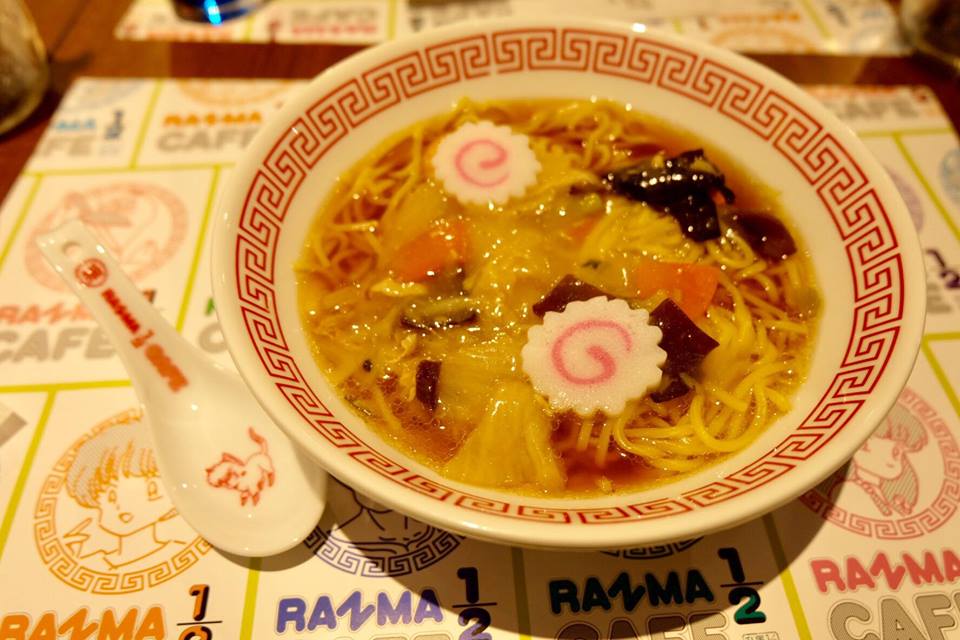 They ordered the restaurant’s best-selling Ramen there. For the fans of the series, that bowl of awesomeness is instantly recognizable. And did you check out the spoon? As mentioned in a previous article, for an additional fee you get to keep that limited Renge utensil. 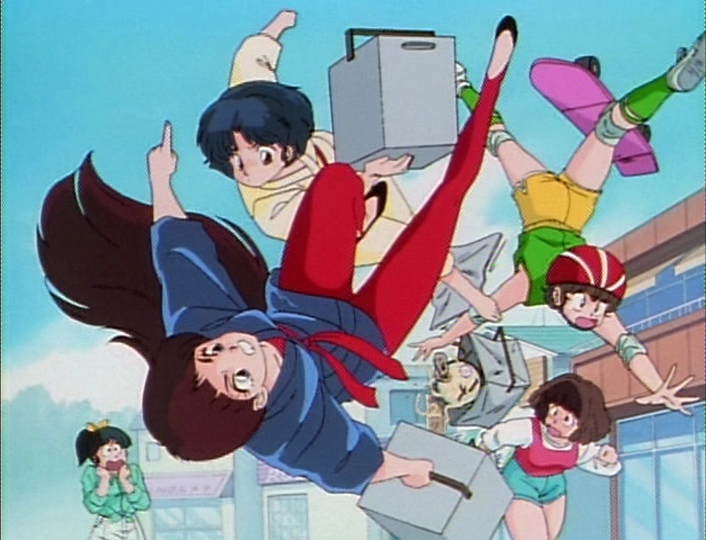 Cool right? But the real kicker here is how the ramen is actually delivered… 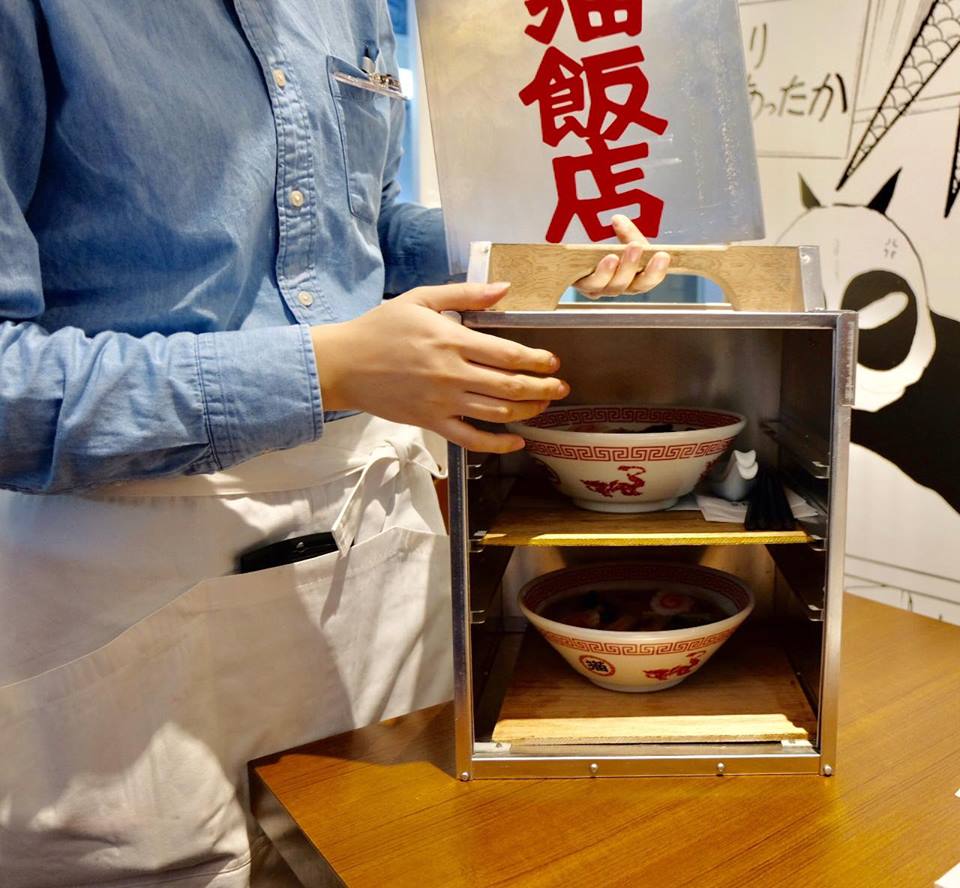 As you can see, this to-go box not only screams in theme… It is also a complete throwback to one of the funniest episodes in the series, the one where they competed in a martial arts takeout race! How lovely is that presentation right? 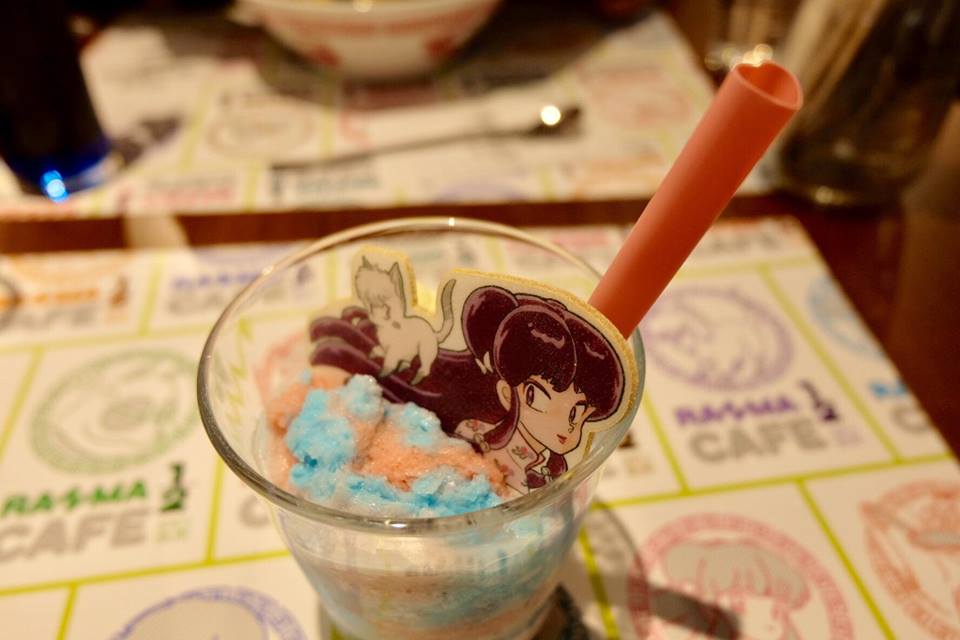 As for drinks, they ordered the Shampoo Smoothie (that wafer is definitely edible) and another refreshment in the theme of Kodachi the Black Rose, complete with petals! 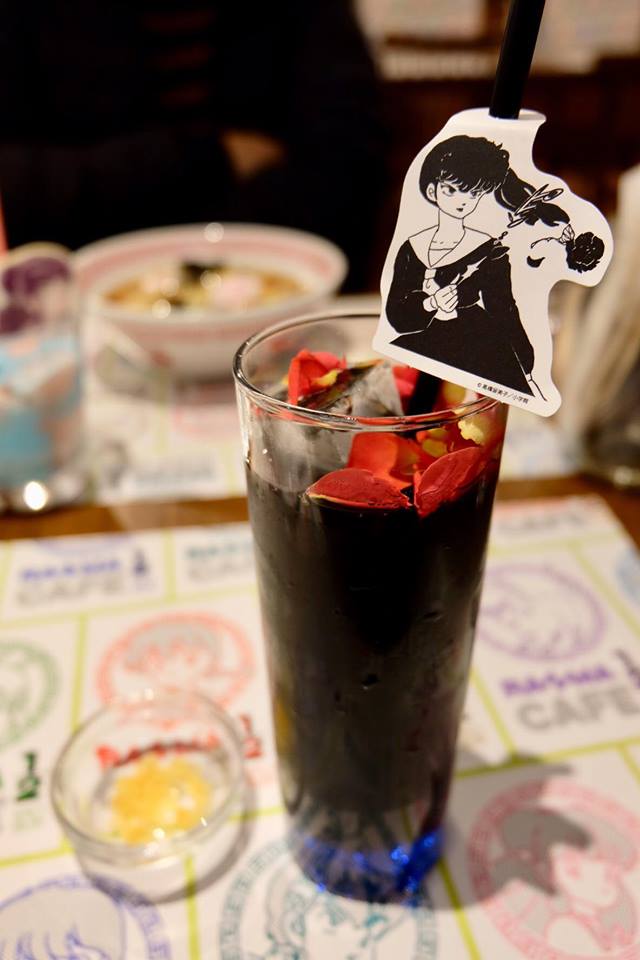 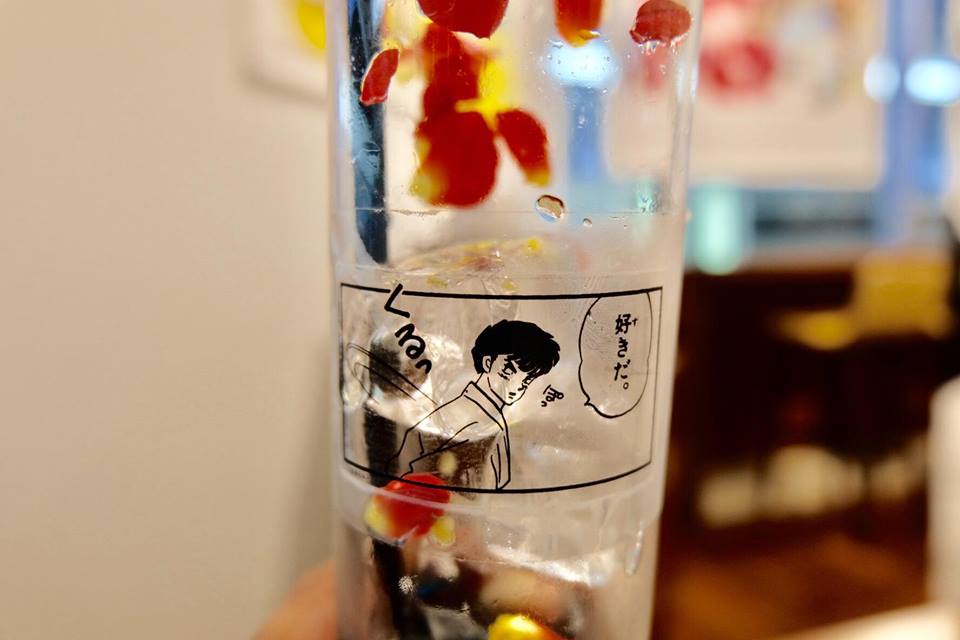 There’s also a funny surprise once you down the black beverage.

Aside from the Renge spoon, no visit in the Ranma Café is complete without actually taking a piece from the place right? Good thing there’s a lot of merchandise to go around!

(Scroll the gallery above to check all the merch) 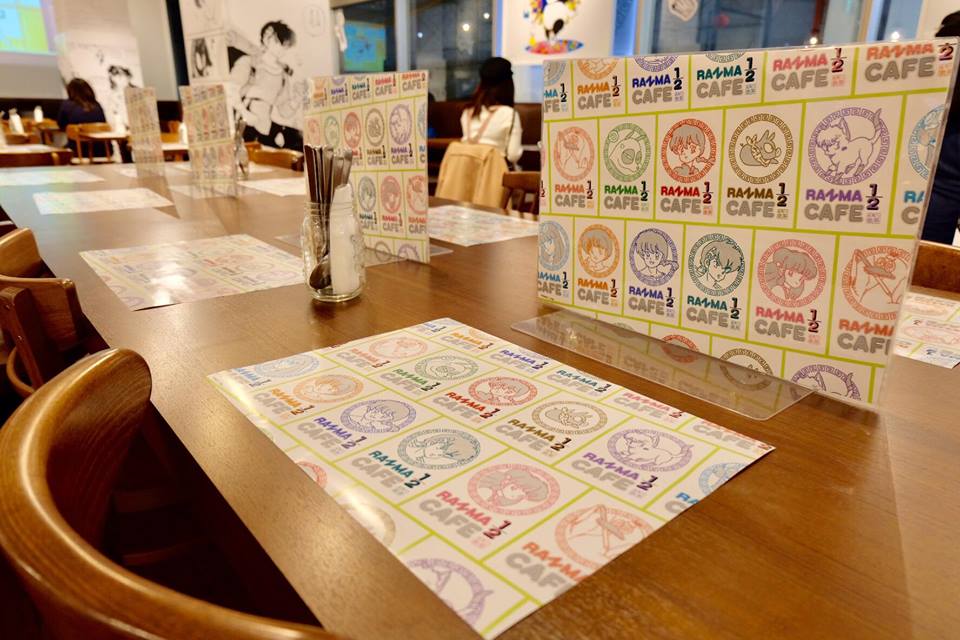 Let’s start with the one that is free, which is the colorful placemat. No, you can’t take home the bowl. 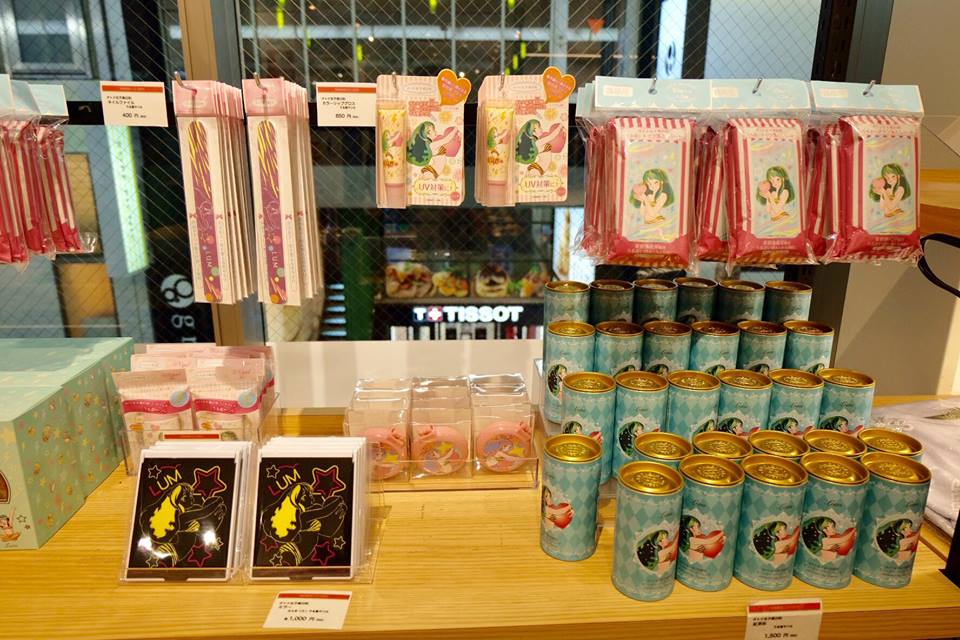 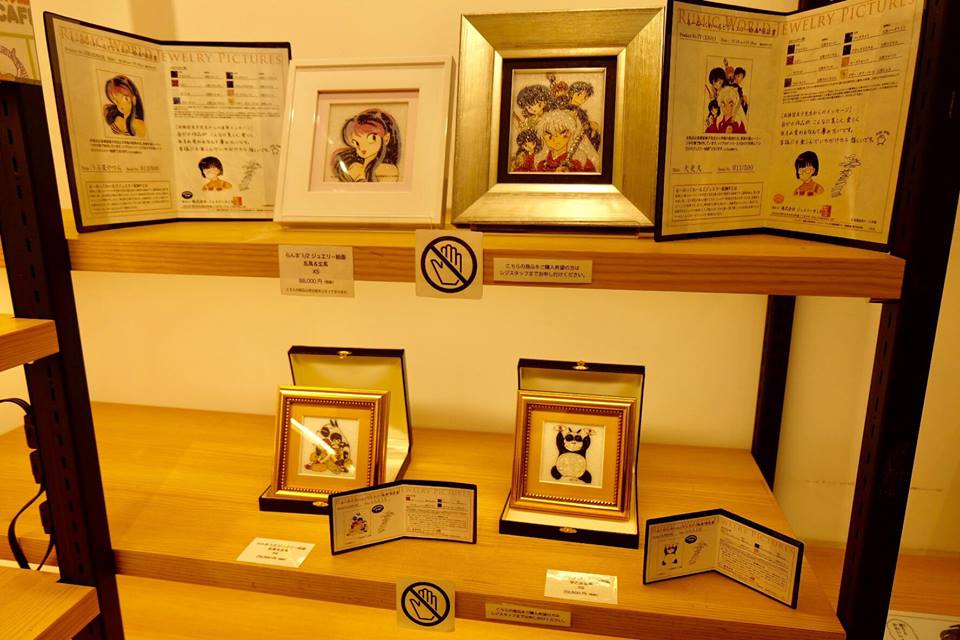 If you have yen to spare there are really a lot of items to choose from, and it is not limited to Ranma. As you can see above there are also stuff from Rumiko’s other works such as Inuyasha and Urusei Yatsura. 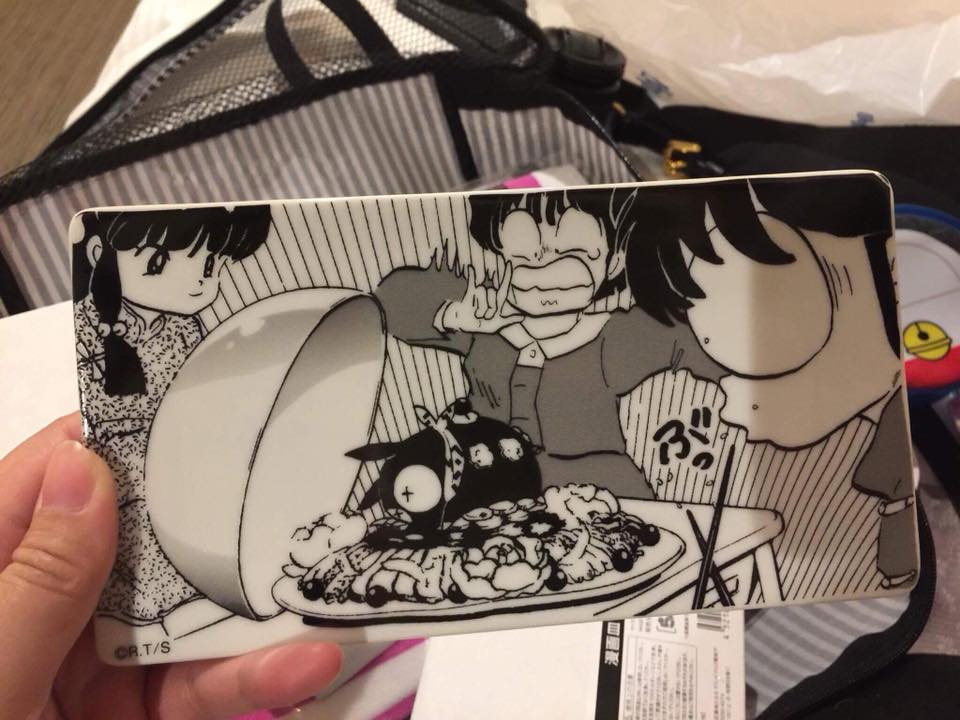 I personally loved the sushi plate.

So that’s everything my sister threw at me while I was weeping here in my room in envy. The next and final leg of the Ranma 1/2 Café happens in Tokyo in January 2018, so for those who are there of is planning to go there, consider making it one of your stops. You won’t regret it.

Thanks to Katherine and Paris for the images.

- Advertisement -
Previous articleOPPO F5 outs a 6GB Variant and Hints at Possible Mobile eSports Support
Next articleGet Pumped! These 5 Anime Characters will Motivate you Through the Worst of Times!