As a fan of Zone of the Enders, the Left Alive CE is a tempting buy! 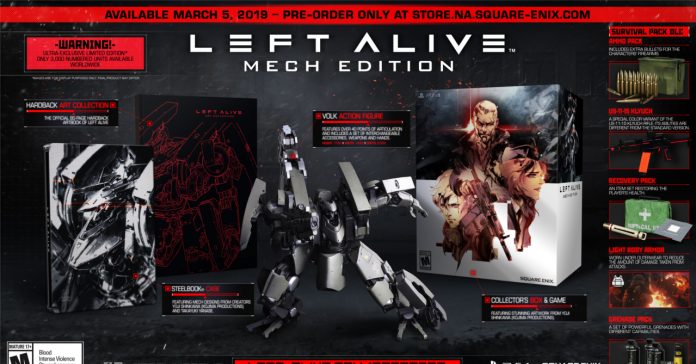 Mark you calendars mecha fans! Square Enix’s upcoming mecha survival-shooter, Left Alive, will be released on March 5, 2019 for the PS4 and PC via Steam. The game is created by an all-star team including Toshifumi Nabeshima (director of the Armored Core series), Yoji Shinkawa from KOJIMA PRODUCTIONS (character designer of METAL GEAR series), and Takayuki Yanase (mech designer of Ghost in the Shell: Arise, Xenoblade Chronicles X).

In case you aren’t familiar with the game, Left Alive tells a dark and gritty story of survival from that follows three different protagonists as they struggle to escape the war-torn Russian city. From what we’ve seen so far, Left Alive is looking like a must-play for Mecha game fans!

Aside from the game’s release date, the ‘Mech Edition’ and Day One Edition for Left Alive was revealed, the game’s collector’s edition includes the following items:

Left Alive will be released on March 5, 2018. The game is also available now for pre-order on the PlayStation Store and on Steam for USD 59.99.

Can’t wait for Left Alive to release? Then you better head over to ESGS this October 26-28, as Square Enix Executive Shinji Hashimoto and Armored Core director Toshifumi Nabeshima are coming to the convention to talk about the game!

- Advertisement -
Previous articleHonor 8X launches in the Philippines with an unbelievable price tag!
Next articleGOTG director James Gunn is in talks to write Suicide Squad 2