If it's as funny as the anime series, we're definitely buying this! 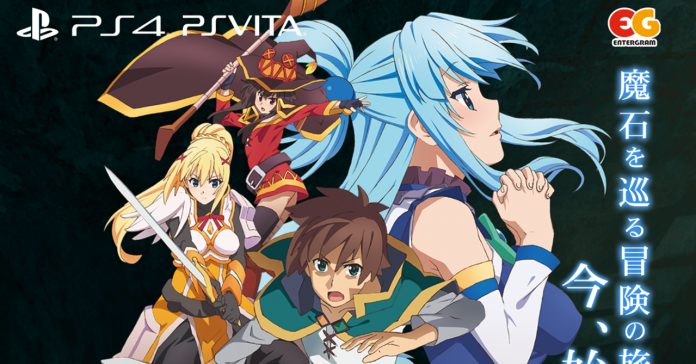 Are you a fan of the anime/light novel series KonoSuba? Well you’re in luck! A KonoSuba dungeon RPG was recently announced, and it’s coming to the PS4 and PS Vita in the future.

As KonoSuba does take some cues from popular Isekai series such as Re:Zero and Sword Art Online, it’s no surprise that the KonoSuba video game is a dungeon crawler. Though we’re excited for the game, given that the series subverts a lot of Isekai anime tropes; not to mention that KonoSuba is one of the most hilarious anime series we’ve ever watched!

Watch the teaser video for the game below (it’s only in Japanese though):

If you haven’t seen the series, KonoSuba (Kono Subarashii Sekai ni Shukufuku o! or KonoSuba — God’s blessing on this wonderful world!!) follows Kazuma, a hikikomori (a shut-in) who is sent into a fantasy world after death. While it’s premise seems typical, the series is anything but; joining Kazuma are a rag-tag bunch of party members (idiots) such as a useless goddess, an explosion-loving wizard, and a masochistic crusader.

The KonoSuba light novel series is currently ongoing; the anime series meanwhile has yet to receive a third season. JC Staff did announced a few months back that they’re working on a KonoSuba anime film due to release in 2019.

- Advertisement -
Previous articleEsports and K-Pop collide in spectacular fashion at LoL Worlds 2018!
Next article[BlizzCon 2018] Check out all these new Blizzard Toys and Apparel