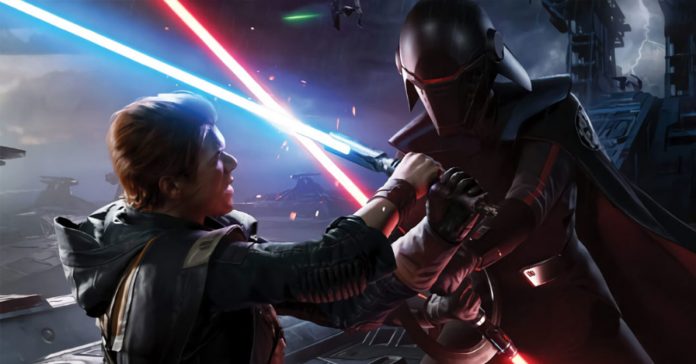 E3 2019 is finally here, and much like last year, EA is the first big publisher to hold a conference. Entitled EA Play, the company’s E3 showcase may not have brought much in the way of new game announcements (plus there was near radio silence regarding Anthem), but there were a couple of interesting showcases.

The biggest reveal during this year’s EA Play was no doubt the first gameplay footage of Star Wars Jedi: Fallen Order. Fans of EA’s shooter titles such as Apex Legends and Battlefield V were also treated to new update announcements.

Opening EA Play 2019 was 15 minutes of Star Wars Jedi: Fallen Order gameplay. While the game was announced back in April during Star Wars Celebration, it’s only now that we finally got to see the game in action (albeit it’s alpha game footage). From what we’ve seen so far, Fallen Order should satisfy Star Wars fans thanks to the cool force abilities shown; though gameplay did seem like fairly standard fare.

The Hunt is on with Apex Legends season 2 — Battle Charge

Battlefield V was the next game to be given the spotlight. In the next major update to the game, BFV will get two new maps: Marita and Al Sudan. There are also more infantry-focused maps coming in the future, as well as a tease for a possible Iwo Jima map.

Also revealed during EA Play is Madden 20, the next game in EA’ long-running Madden American Football series. For this title, Kansas City quarterback Patrick Mahomes was chosen as the cover athlete.

Finally, EA announced Island Living, a tropical-themed expansion to The Sims 4. This new expansion releases on June 21 for PC and Mac and July 16 for PS4 and Xbox One.