A gaming headset that won't hurt your head nor your wallet.

If you read my first impressions of the headset, you can tell that my opinion about this headset is actually pretty good, at least when I first tried it out. After trying out the headset some more, I finally have a verdict! 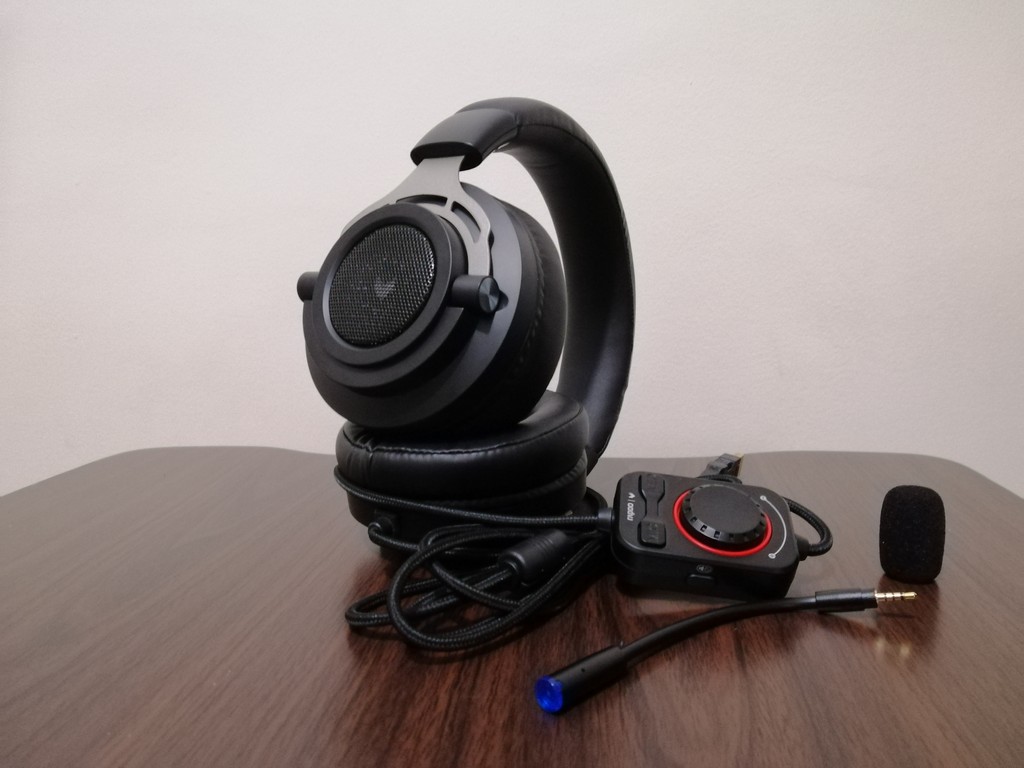 Read on for the full review of the Rapoo VH300: 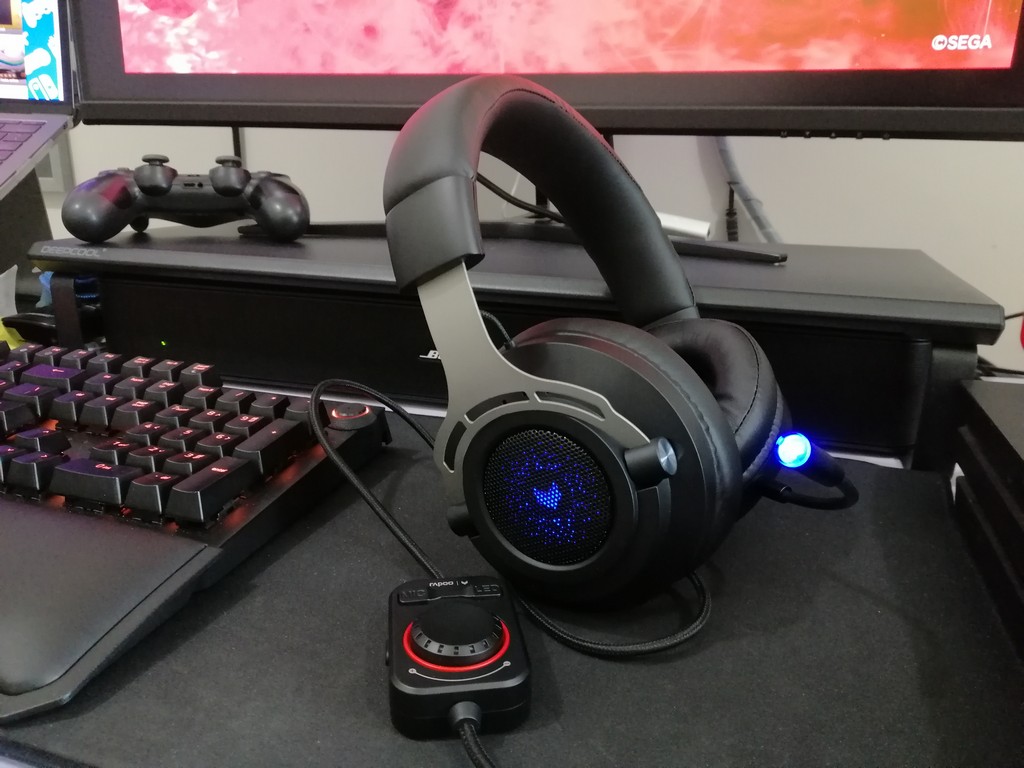 Although the Rapoo VH300’s design is not exactly revolutionary, there’s still a charm to this “classic gaming headset” look. Even though its looks skew towards the plain side, the headset and mic does have blue LED lighting helps its looks “pop” a bit. 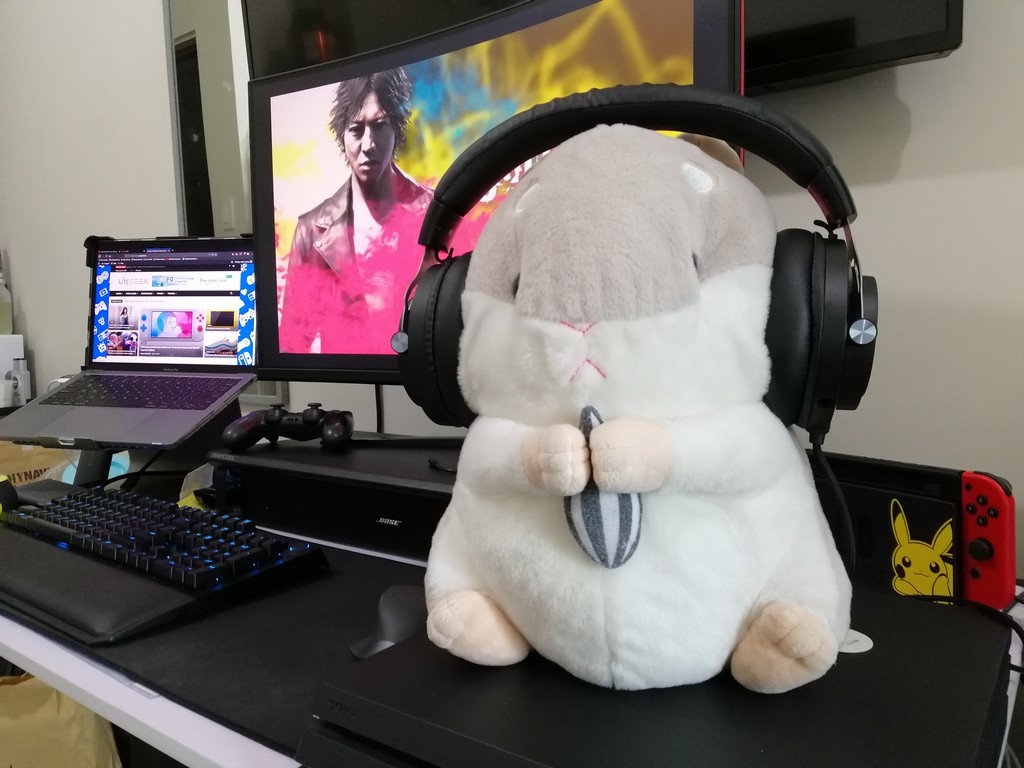 As demonstrated above, the VH300 headband is flat when worn. I might be nitpicking and this is purely personal taste but I wish the headband is a bit rounder. I did try to adjust the headband to find a work-around, unfortunately there is no way to fix it. A bit reluctant to give it a 7.5, but again the headband is just too flat for my taste. 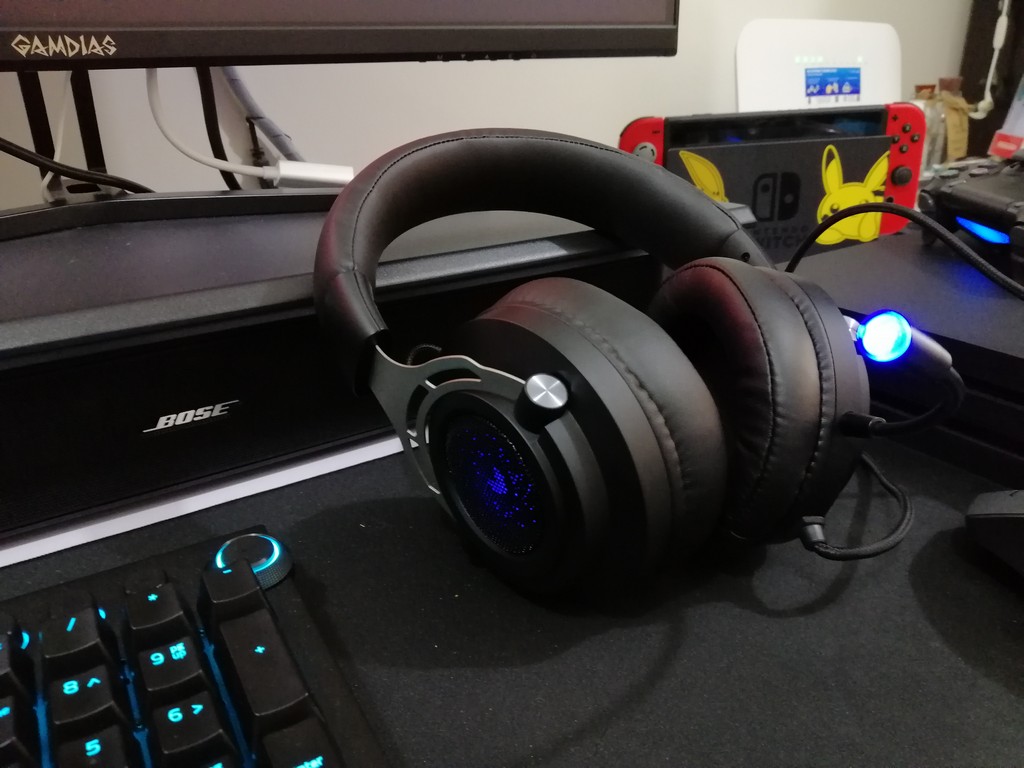 The round ear cups is actually big enough to cover my whole ears and make me oblivious of my surroundings. While the sound quality for both gaming, music, and movies is decent, it’s not strong enough to reach my expectations.

I played Judgement for a while with the headphones on and the dialogue of each characters kinda felt unnatural and flat. I then tried to play a different game with a wonderful BGM and a wilder environment like Sekiro. You can feel that it tries to deliver that surround sound, after all it is supposed to be a Virtual 7.1 Channel gaming headset, but the VH300 just can’t reach it’s full potential (at-least in the PS4). 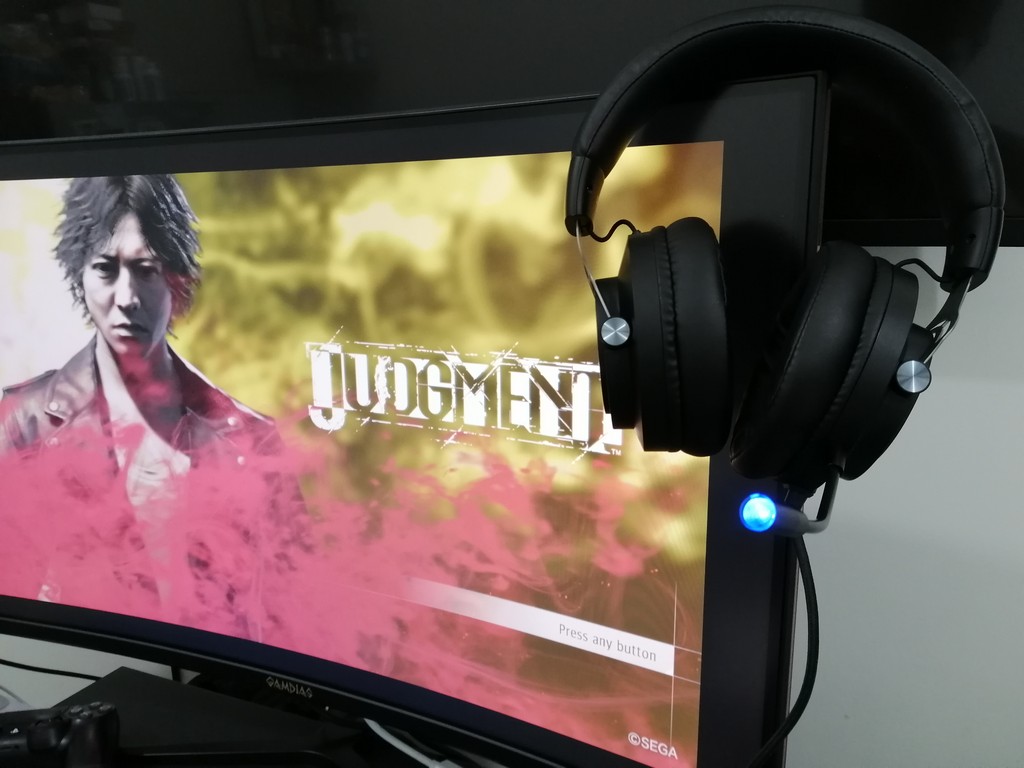 At the time of writing of this review it’s already JoJo Friday (Special Finale on July 28), making it the perfect time to try out the headset for binge watching a whole series. Since the series is actually known for wonderful sound design (and poses), the VH300 has less trouble delivering crisp audio when watching series/movies. Ironic really, considering that it’s a gaming headset. Although you can still tell that it lacks that power in audio. 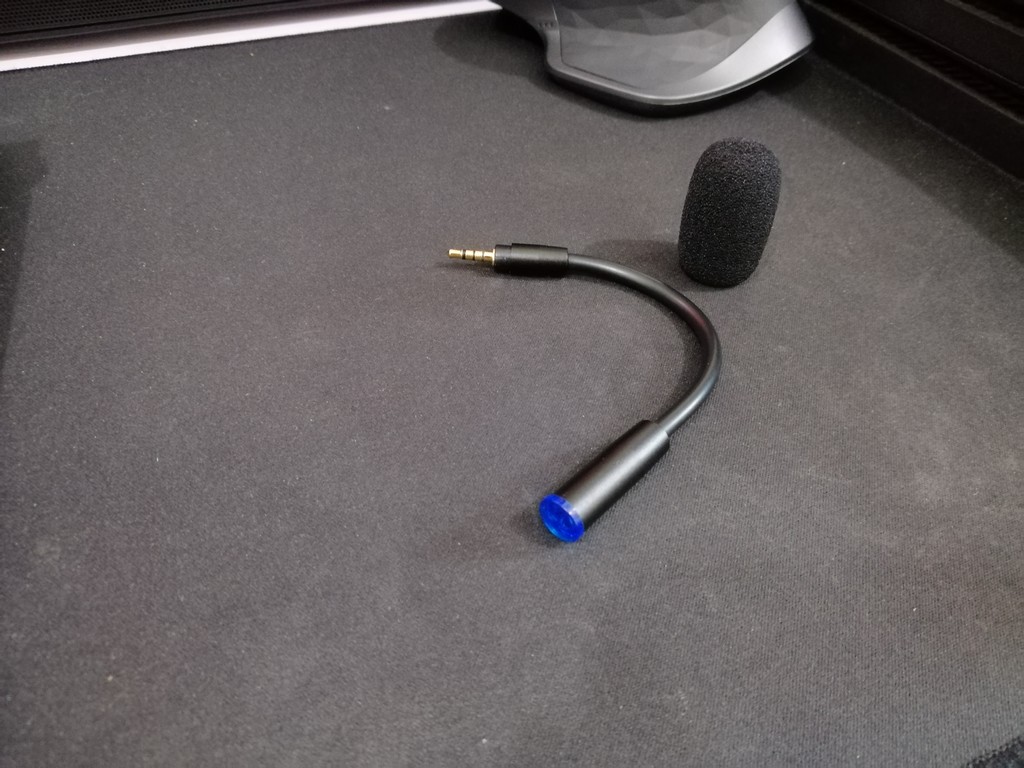 While the sound quality of the headset isn’t as great as I would’ve liked, the mic is actually great! It delivers a strong and clear sound when I speak through it. Plus, you can download an additional driver interface to freely control voice modes for customization; not to mention that you can you can press the mute button through the controller or just simply detach the mic from the device if you don’t want to use it. 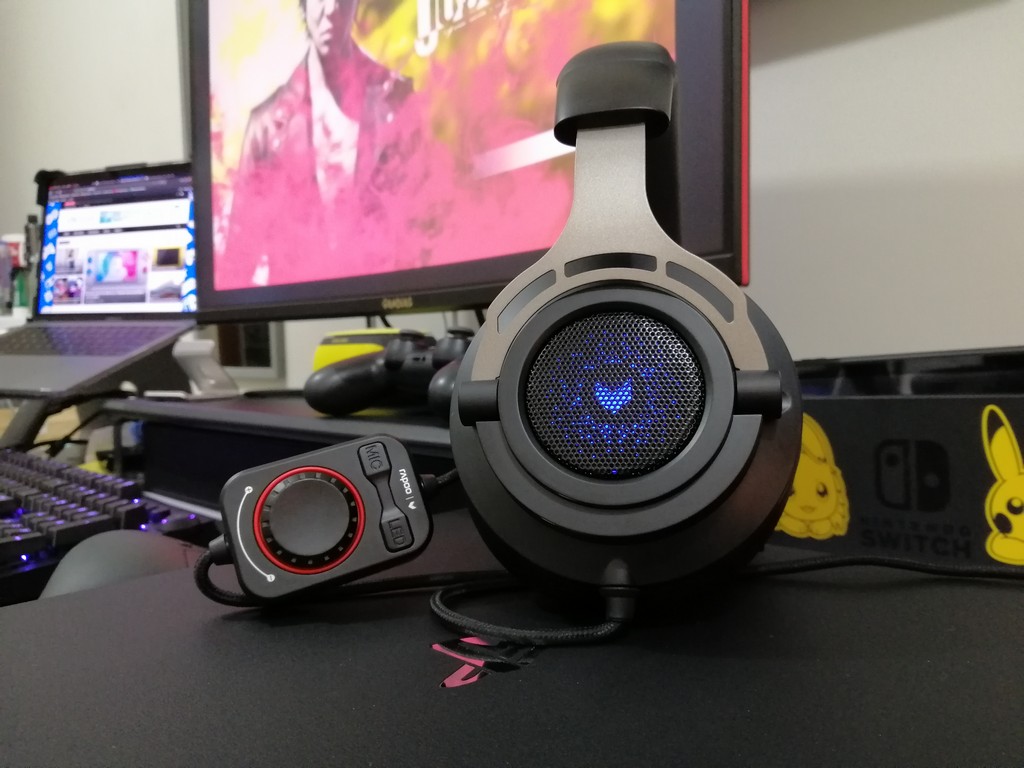 Although it lacks the wireless functionality the Rapoo VH300 is compatible with any audio devices and gaming consoles that supports a USB connection.

Now for how it feels in the head, the Rapoo VH300 is really comfortable to wear. Even for long hours of gaming and binge watching, the headset  feels comfortable to wear as the ear cups are soft and the headband does not clamp the head too tight. But the leather can feel a bit warm if you wear it long enough. 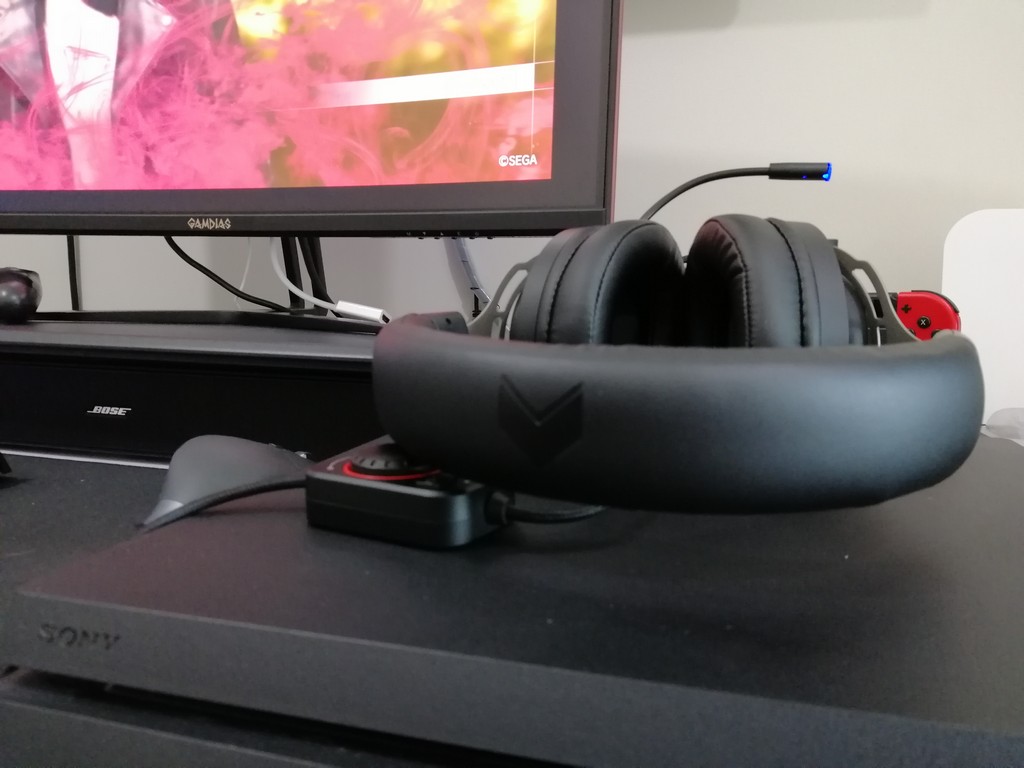 Still, I have a couple of concerns such as the leather material which I hope won’t peel off quickly. There’s also the fact that the headset is rather light; while this is great for some, it’s light enough that the it might get tugged out of position easily.

The Rapoo VH300 may be a bit lacking in sound quality, it is decent enough overall for gaming. On the other hand it’s clear Mic performance is definitely a huge plus and useful during your game time or recording sessions. An interesting thing about the headset is that it actually works better for binge-watching! Plus, the headset is comfy for long gaming sessions. Here’s hoping that the materials used (such as the leather material) hold up long though.

Overall, the Rapoo VH300 as a good wallet-friendly headset that you can consider if your budget is a bit tight.

Geek Lifestyle Review: RAPOO VH300 Gaming HeadsetThe overall appearance of the Rapoo VH300 is not that really bad but is just way too flat in the headband area. While not meeting it's full potential as it promises a virtual 7.1 audio while gaming the headphone is indeed decent enough and is really comfortable to wear.