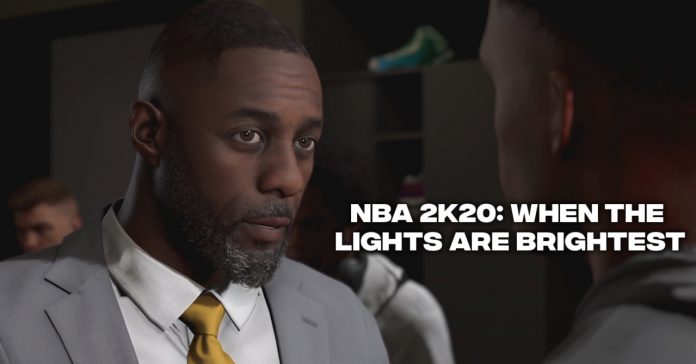 As part of the partnership, SpringHill Entertainment produced NBA 2K20’s MyCareer cinematic narrative: “When The Lights Are Brightest.” This new storyline for NBA 2K’s signature game mode doesn’t just promise to be the most cinematic one yet, it’s also the most star-studded in NBA 2K’s history!

Watch the teaser trailer for When The Lights Are Brightest here:

As you saw in the teaser, NBA 2K20’s MyCareer will feature a star-studded cast, including the likes of Idris Elba, Rosario Dawson, and a myriad of past and present NBA All-Stars; including of course, Lebron James. Aside from being filled with big names, “When The Lights Are Brightest” will also have cinematics that seem straight out of a sports documentary or film instead of a video game shots-wise.

The storyline of NBA 2K20’s MyCareer is described as:

“This year’s narrative features the storyline of an NBA prospect named Che on his quest for gold both on and off the court, covering the importance of mentors, dealing with off-court pressures and current social issues. In this game setting, the path to stardom is firmly in the gamer’s hands.”

In case you’re unfamiliar, NBA 2K’s MyCareer serves as the game’s main “story mode”. In MyCareer, players create an athlete with the goal of making it big in the NBA; basically, players don’t just play ball, they also manage almost all aspects of the player’s basketball career.

NBA 2K20 will be released in the Philippines on September 6, 2019 for the PS4, Xbox One, Nintendo Switch, and PC. For more on the game, including pre-order info, check out our quick feature here: