These dual-screen laptops should be a great match for working professionals! 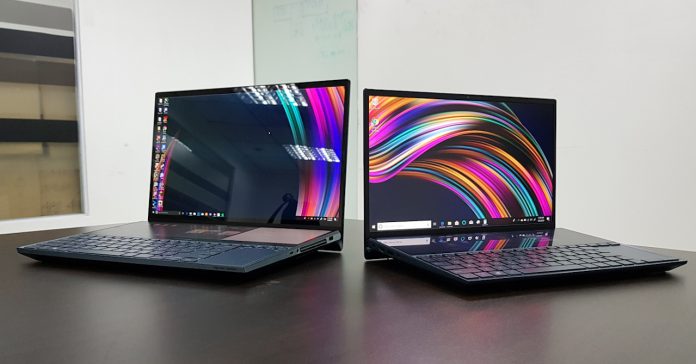 A few months ago, ASUS unveiled its new ZenBook Duo line at Computex 2019. When we got to have a quick hands-on with the laptops at Computex, we were quite impressed. Having a portable laptop with two screens opens up so many possibilities, especially for productivity. There’s also the fact that both laptops have powerful hardware. After trying them out, we couldn’t wait to get our hands on them again. 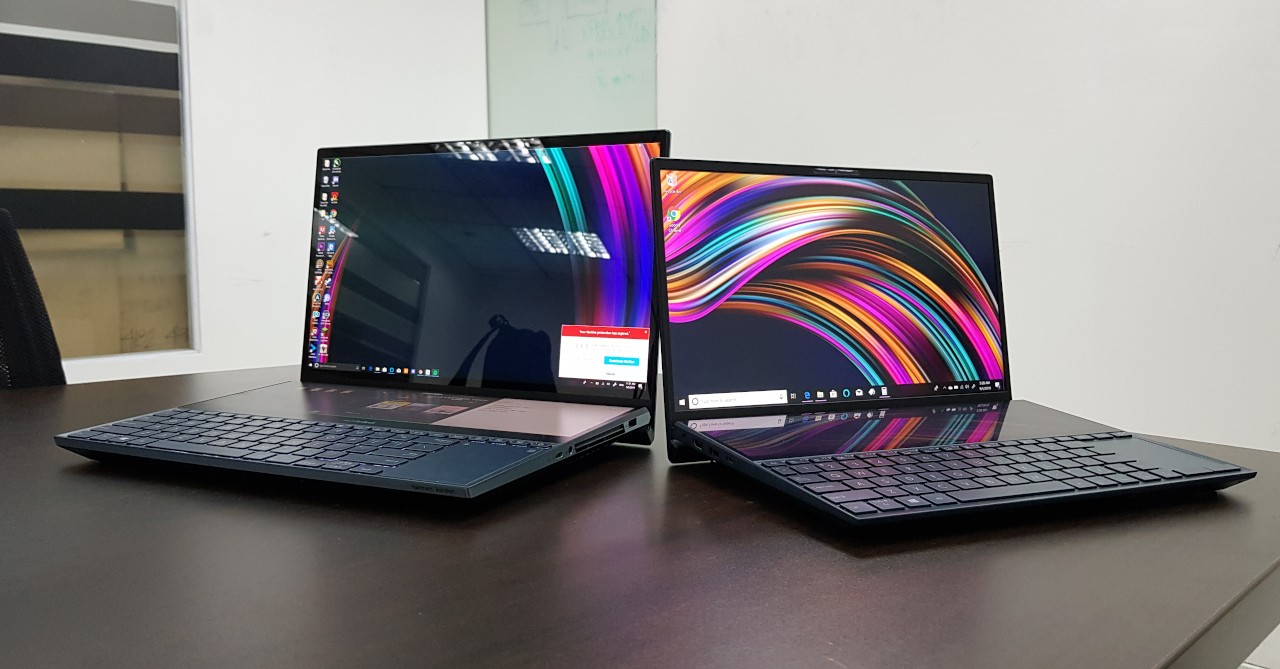 Finally, ASUS has brought the ZenBook Pro Duo and the ZenBook Duo to the Philippines! While these two laptops are yet to be released in stores, we go to try them out for ourselves again, this time for quite a bit longer. 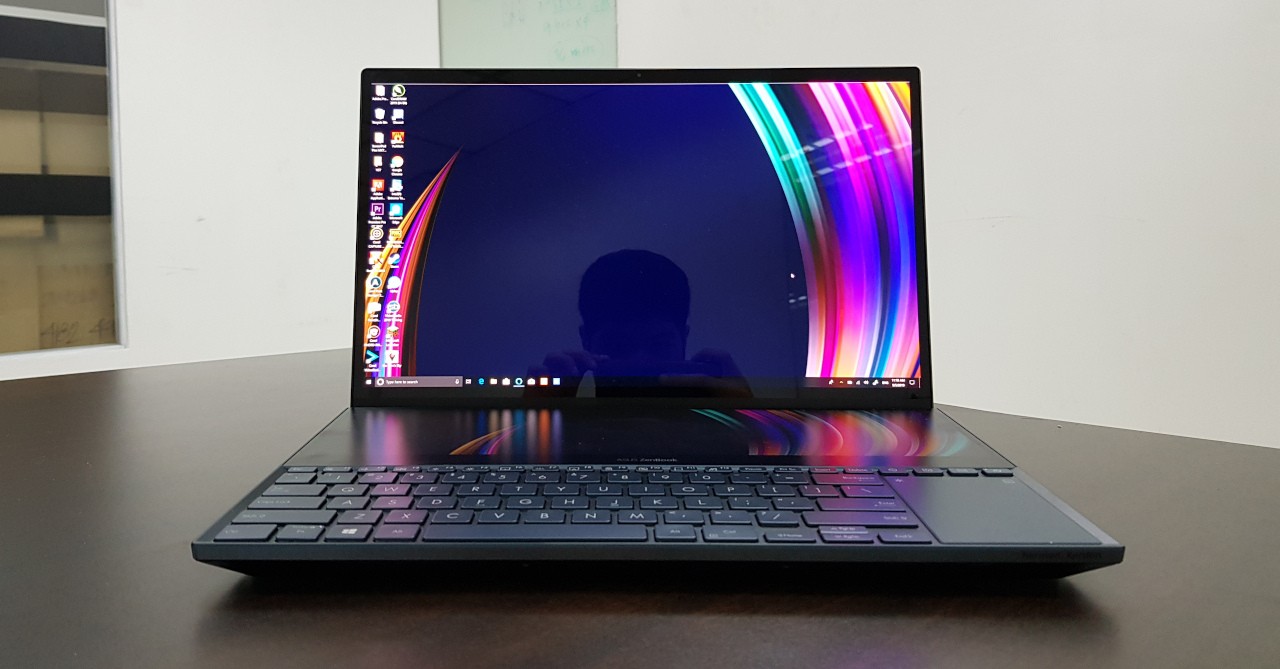 We started off with the ZenBook Pro Duo, the top-of-the-line model in ASUS’ new lineup. As a high-end notebook, the Pro Duo is packed with powerful hardware, including an Intel Core i9 processor and an RTX 2060 GPU. With these specs, the ZenBook Pro Duo should handle most productivity software such as video editors, 3D modeling programs, and many more. Plus, it should also be able to play even triple-A games too. 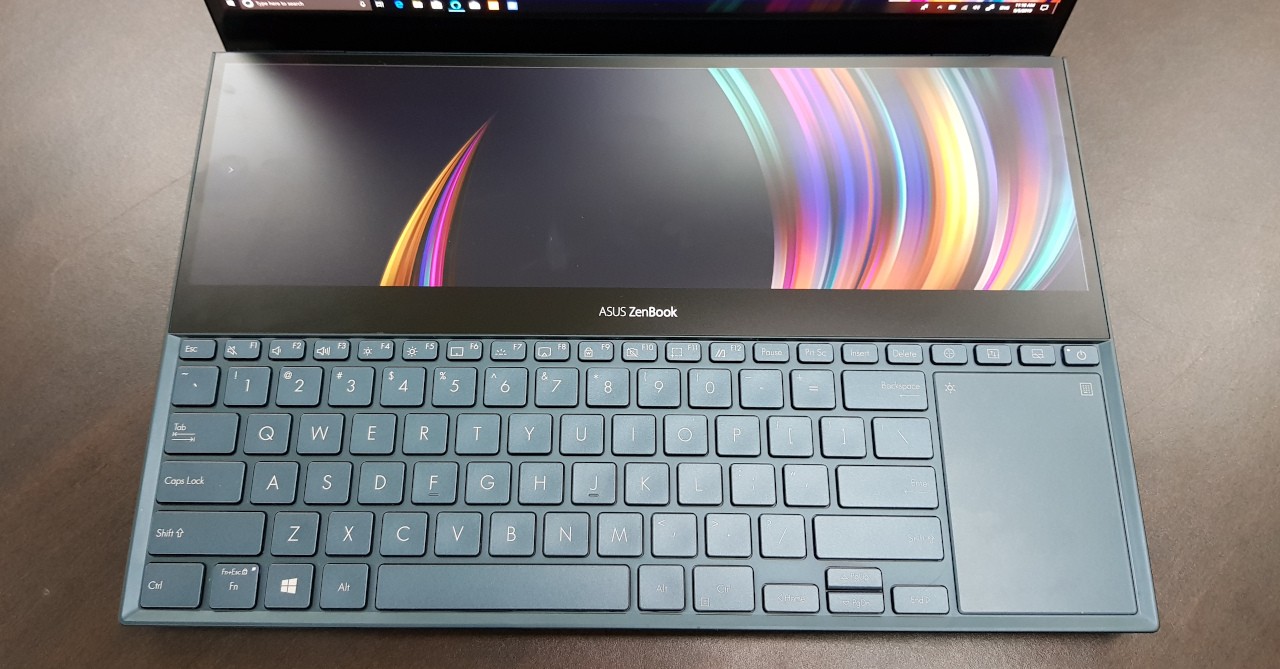 What makes ZenBook Pro Duo special isn’t just its internals though, it’s the two screens. The main display is a 15.6-inch 4K UHD OLED panel while the secondary “ScreenPad Plus” screen is a 14-inch display with a 4k resolution. Both of these screens are touch displays, meaning users have even more control options. 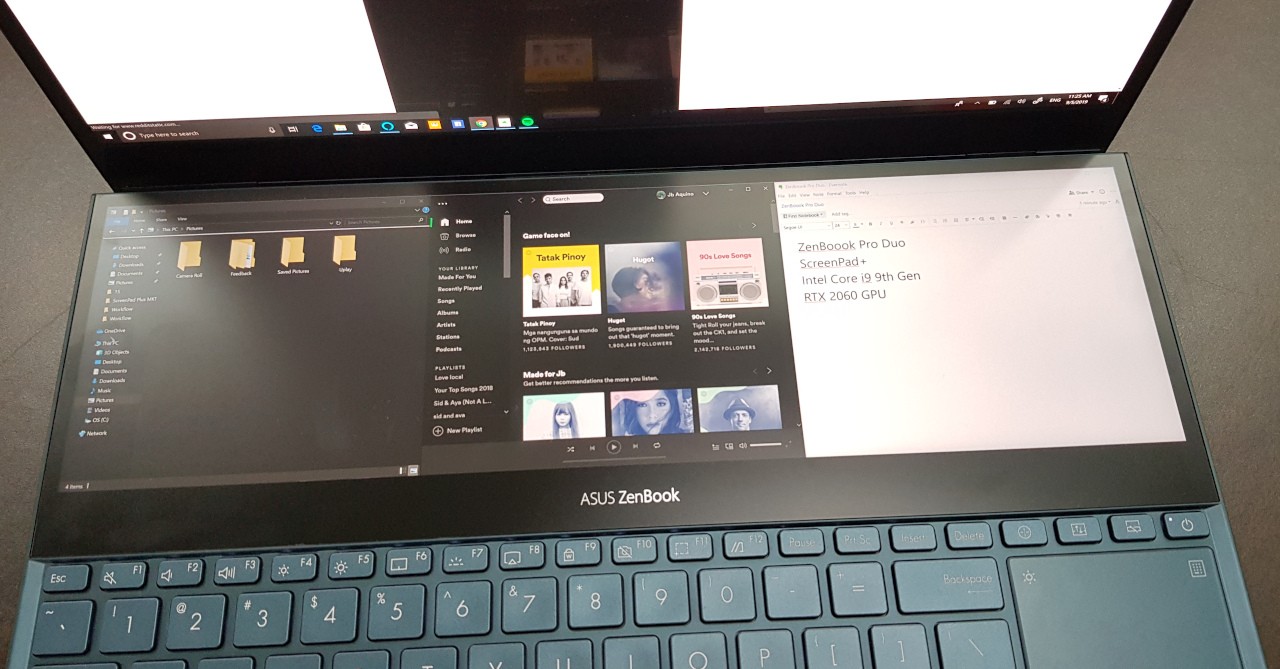 During our quick time with the laptop at Computex, we didn’t get to explore ScreenXpert control all that much. Recently though, we finally got to test out most of the software’s features. The most useful feature of ScreenXpert is multi-app shortcuts; how it works is that it saves the current open apps of the two screens, with a maximum of three open apps at the ScreenPad Plus. Once a shortcut is stored, just launch it to re-open the apps you’ve saved (e.g. one shortcut can be set to open File Explorer, Spotify, and Notepad with one click).

One feature that we weren’t able to try was ScreenPad Plus support of select programs. Take for instance Adobe Premiere Pro; on the ZenBook Pro Duo, you can set certain tools of the program on the ScreenPad Plus so you can have an easier time handling the app’s multitude of features. 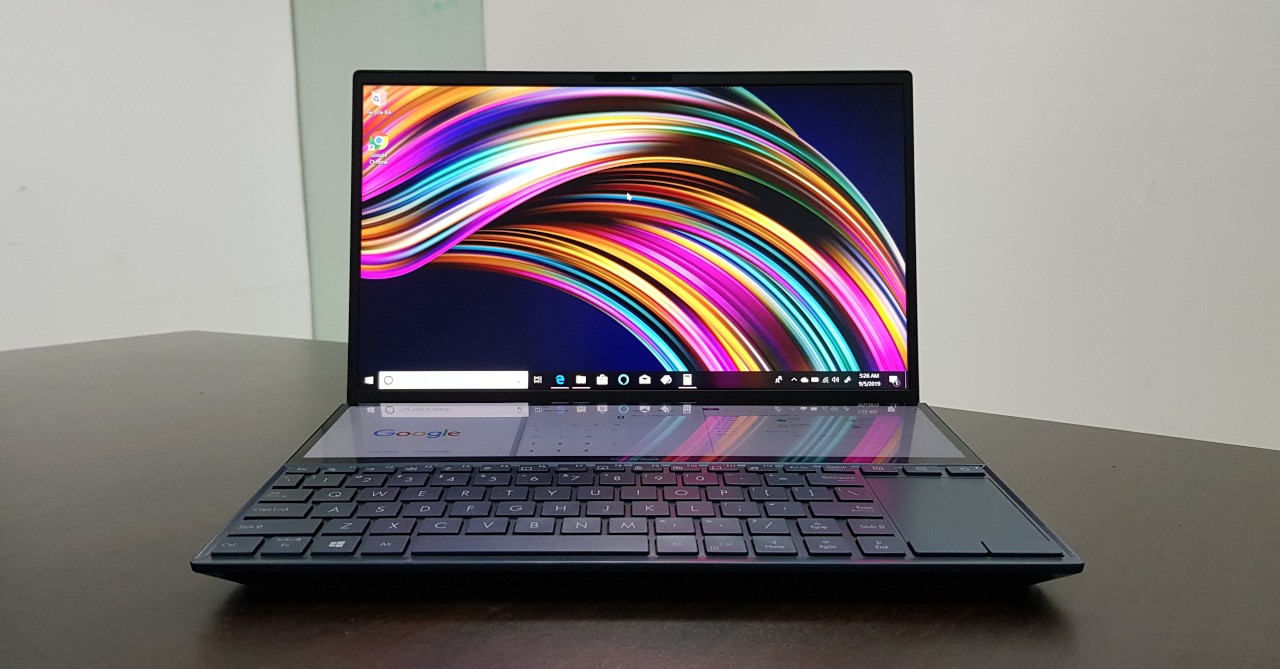 While it’s not be as powerful as its Pro counterpart, the ZenBook Duo is still an impressive laptop. The main differences between the two are size and specs; the Duo has an Intel Core i7 processor and a GeForce MX250 GPU, as well as a smaller 14-inch FHD display (non-touch) and a 12.6-inch FHD ScreenPad Plus touch screen. 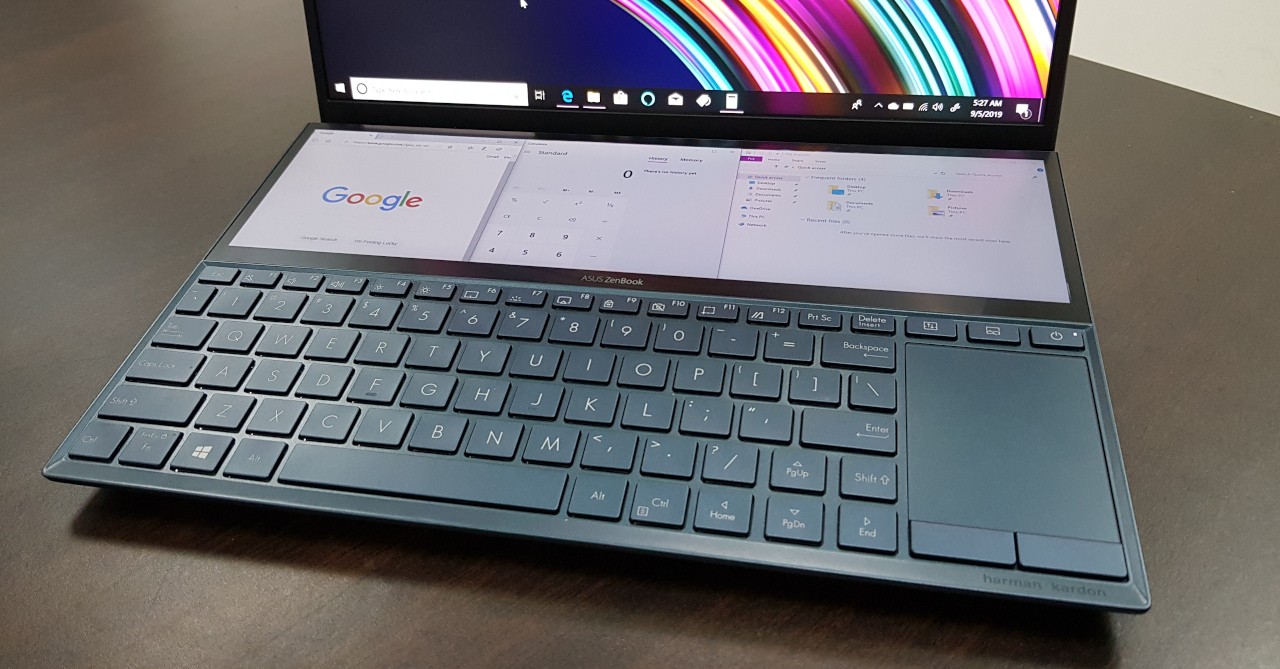 It may not top-of-the-line, the ZenBook Duo should still be powerful enough to handle most creative software. But the best part about it is that it shares the exact same ScreePad Plus functionality as the Pro Duo. This means that the multi-tasking that you can do with the Pro, you can also do with the Duo.

So why go with the Duo and not the Pro model? Well, we can think of two cases: either you prefer a smaller form factor, or that you won’t be able to take advantage of the Pro’s high-end specs. 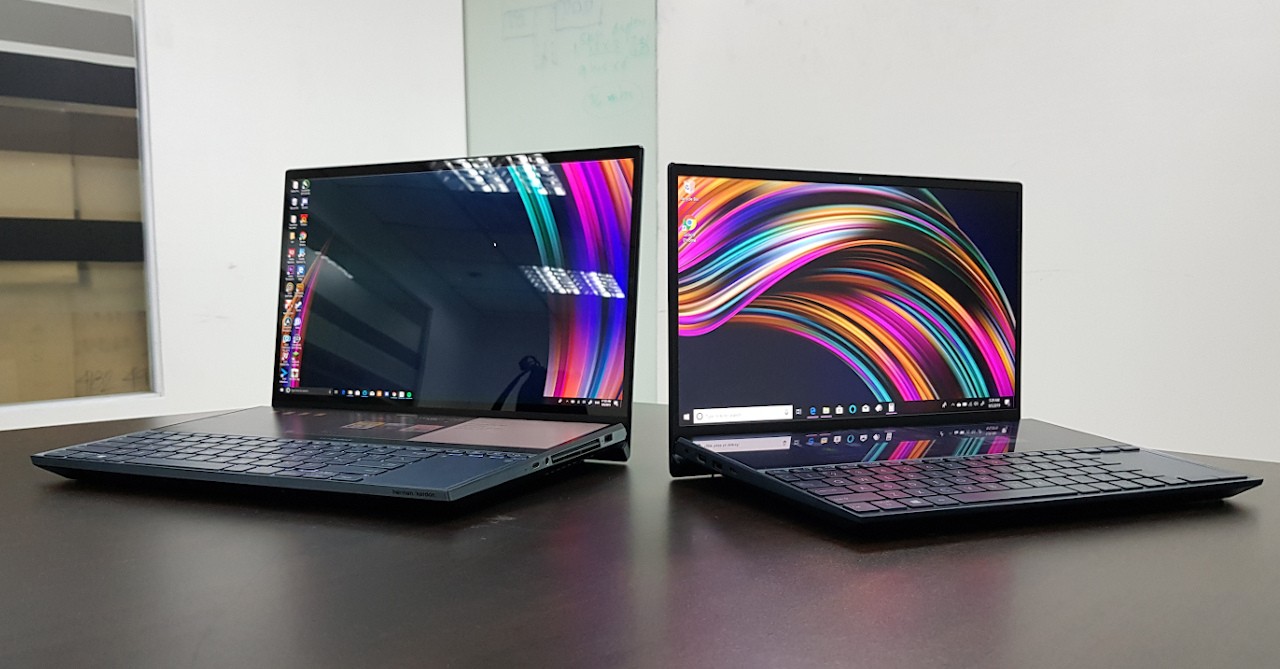 From our time with the ZenBook Pro Duo and Duo, we can safely say that creative professionals/content creators should definitely look out when these laptops become available. ASUS will announce PH pricing and availability of these laptops very soon.