Still one of the best smartphones for productivity. 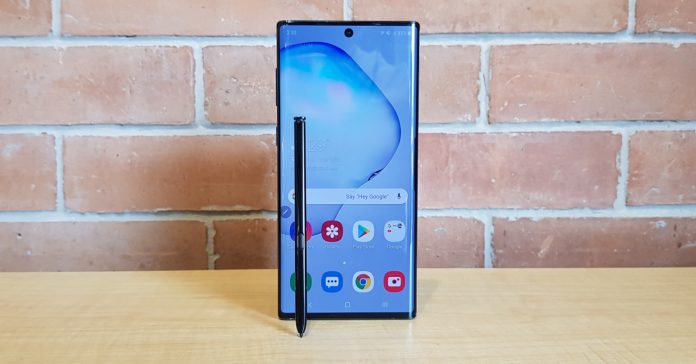 Last month, Samsung officially launched its new Note 10 line, and it’s the first time ever that there are two Note variants — the base Note 10 and the Note 10+. On paper, it’s the ‘+’ variant that’s the more impressive given that it has the larger screen, bigger battery, and expandable storage. But this doesn’t mean that the base model should be overlooked; the Note 10 still packs the same processor, cameras (sans the depths sensor), and the nifty S Pen. 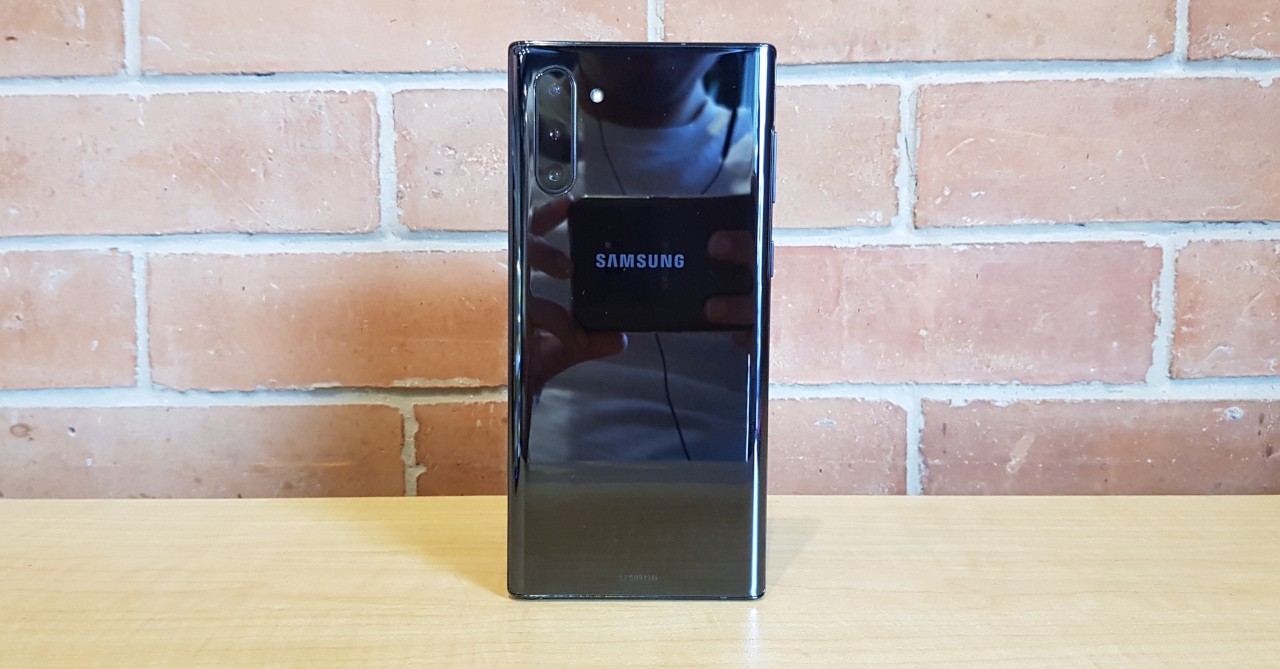 Still though, the Note 10 lacks quite a number of features found in the + model, which doesn’t seem to good at first considering this phone still comes at a premium price. But of course, this is all just based on specs. So is the phone deserving of the esteemed “Note” moniker in actual use? We find out here in our full review of the Galaxy Note 10! 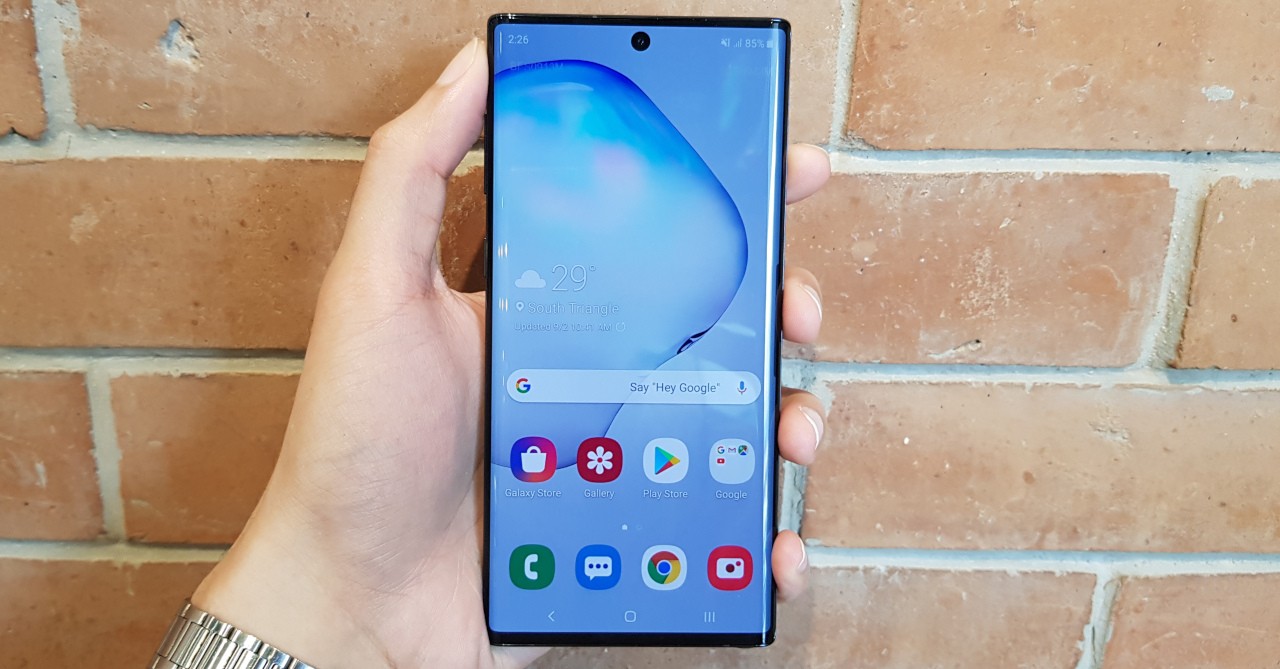 As with previous Note devices, the Galaxy Note 10 looks like a more rectangular version of its S-series siblings. Personally, I like the square corners of the Note 10 over the more rounded ones on the S10, both visually and in-hand. Speaking of in-hand feel, the Note 10 is easily the best Note phone yet in terms of size; even with its large 6.3-inch display, the fact that it has incredibly thin bezels makes it a dream to use even with one hand.

The only thing I didn’t like about the Note 10’s design (at least from the front) is its front camera placement. The phone’s selfie shooter is placed right in the middle, which can be a bit distracting at first; I would’ve preferred the Note 10’s front shooter be off to the side like the S10. 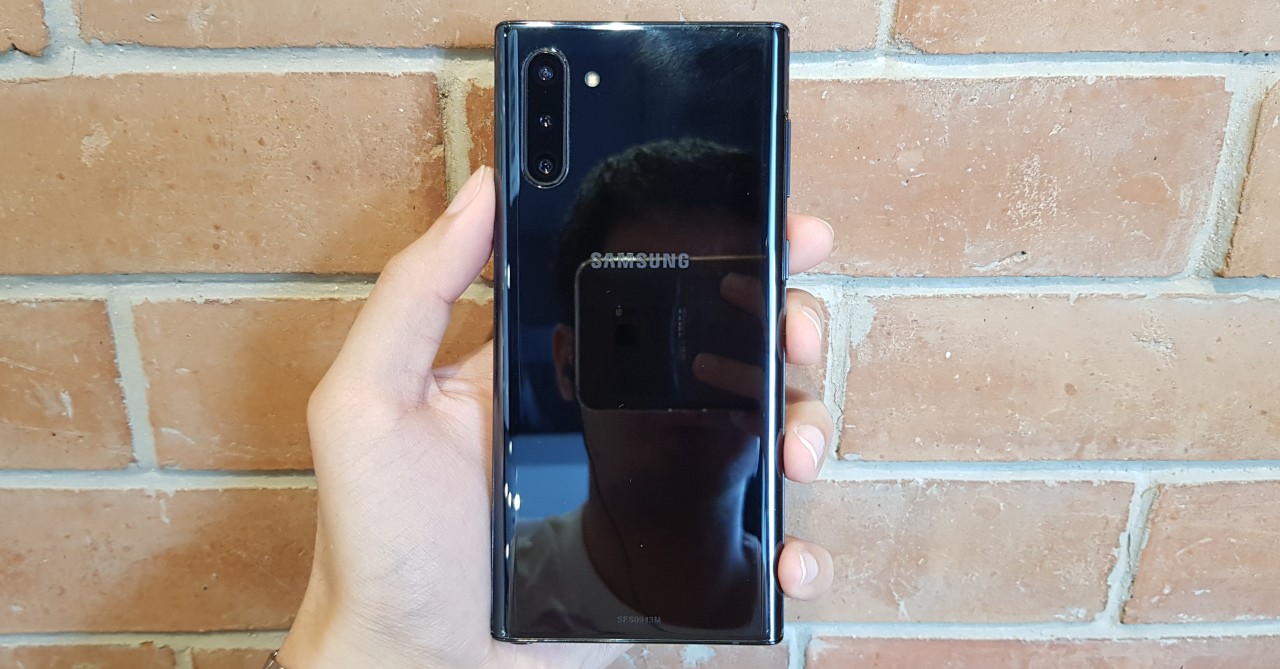 As with most flagship phones, the Note 10 has a glass back that looks and feels premium, though at the cost of being a massive fingerprint magnet. While the phone’s signature Aura Glow color is the more eye-catching colorway, the Aura Black (pictured above) is a better fit if you prefer a more subtly-designed phone. 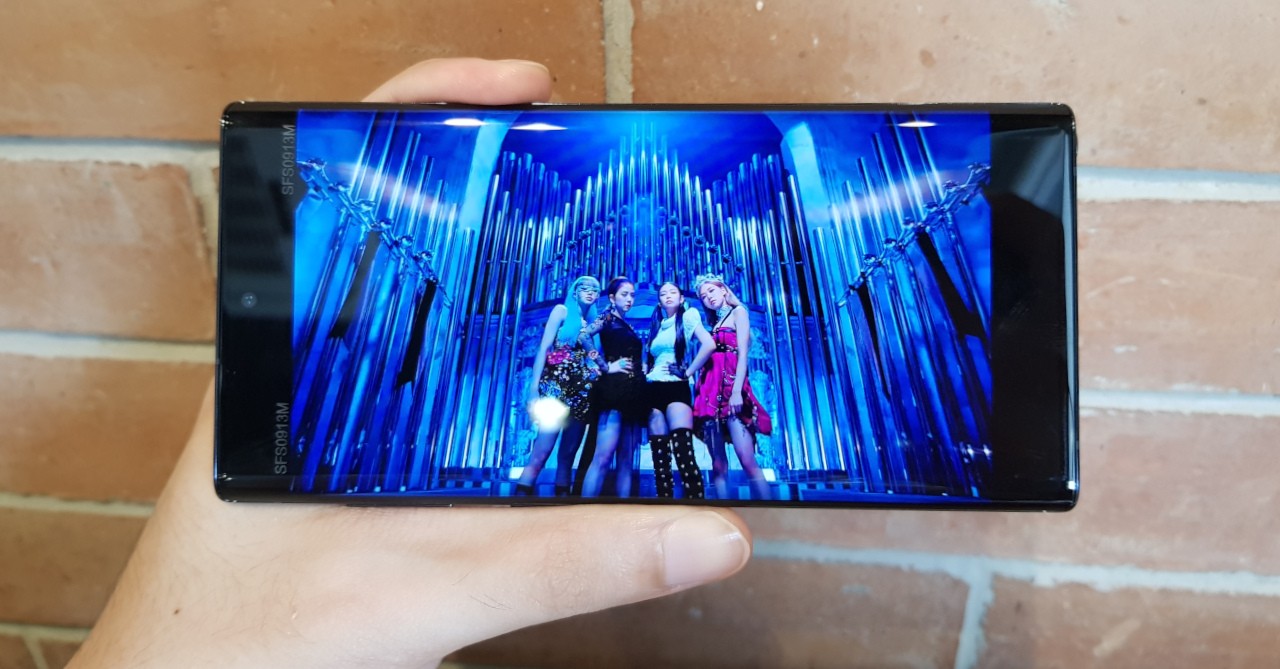 Samsung’s new Note 10 features a 6.3-inch FHD+ AMOLED Infinity-O Display with a 2280×1080 resolution. Yup, just 1080p. I’m not gonna lie, I was a bit disappointed when I found out that the Note10 only had a 1080p display considering every Samsung flagship since the S6 Edge had a 1440p resolution, but my opinion quickly changed when I got to try it out for myself.

In actual use, I didn’t really notice that the phone only had a 1080p display. In fact, I even tried comparing it side-by-side with an S8+ at 1440p — I didn’t notice much difference in terms of sharpness and detail. Coupled with the fact that the screen produces vibrant colors (Samsung still makes the best AMOLED panels in the business) means that the Note10 screen is still very good for binge-watching, even if it’s only a 1080p display.

Speaking of binge-watching, if you’re planning a movie/series marathon on the phone, the onboard stereo speakers are actually pretty good! The speakers’ output is loud and of good quality, even at max volume. 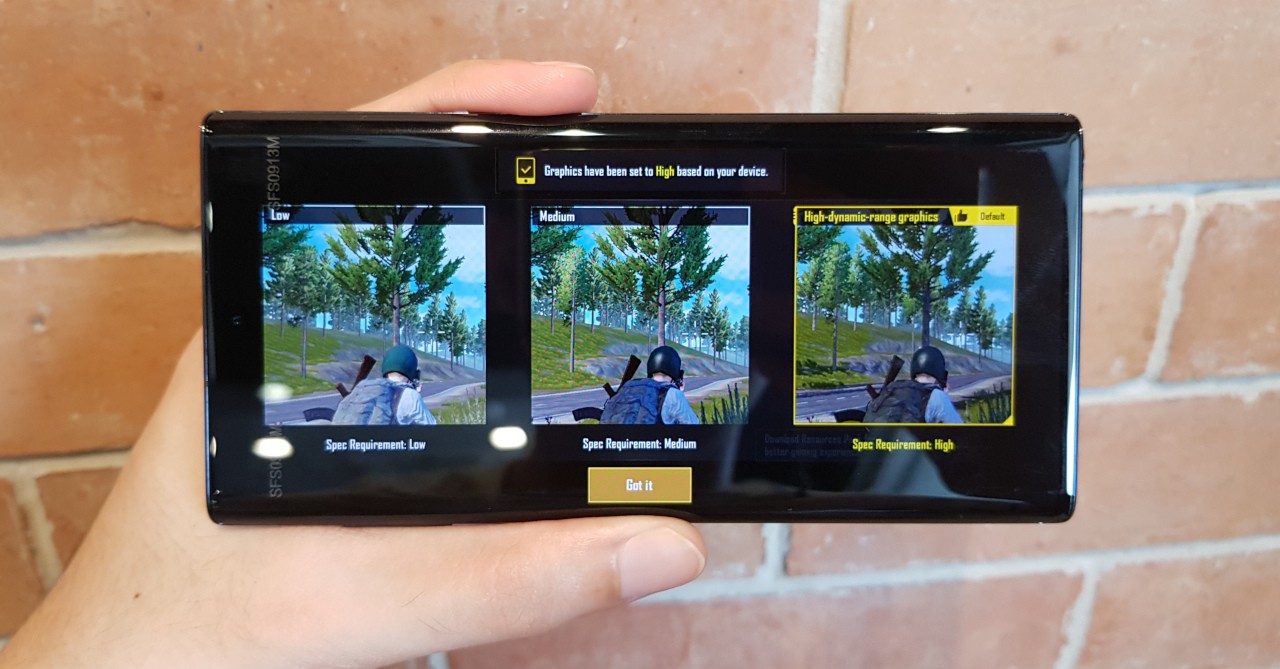 The Note 10 is powered by an Exynos 9825, a slightly upgraded version of the 9820 found in the S10 line. As expected, the Note10 handled almost every game we tried out with ease, with the phone maxing out graphics settings for common mobile titles. such as PUBG Mobile and Mobile Legends. What makes the Note10 even better for gaming is its Game Booster feature which automatically optimizes performance based on the game you’re playing.

For its cameras, the back of the Note 10 has 12MP + 16MP ultra-wide + 12MP telephoto triple cameras, while the front houses a 10MP selfie shooter. Seems familiar? Well, it’s the same setup that you can find in the Galaxy S10, which means the Note 10 cameras perform just as good as the S10, if not even better.

For daytime and well-lit indoor conditions, the Note 10 produces detailed images with great colors. As with the S10, we prefer keeping the Scene Optimizer (the phone’s AI camera feature) on for slightly more vibrant colors on photos, though you can turn it off if you like more natural colors on shots.

Where the Note 10 beats the S10 (at least at the time I reviewed the S10) is in night photography thanks to its dedicated Night Mode. With Night Mode, the Note 10 can take bright and detailed shots in low-light conditions, though some shots do come out a bit too colorful/vibrant. In these cases, the Note 10 still takes good low-light images using auto mode.

Meanwhile, the 16MP ultrawide camera also take detailed shots with good colors. Night Mode also works on the ultrawide shooter, meaning you can take dramatic low-light shots with this camera. The only thing I didn’t like is the slight distortion (or “fish-eye” effect) at the sides.

The Note 10’s 12MP telephoto takes outdoor shots that look nearly as good as the main shooter, even at night thanks once again to Night Mode. The telephoto shooter also has OIS, meaning you can take good videos with it to boot.

Finally, the Note 10’s front camera takes pretty good seflies which are good enough for sharing on social media. Just make sure you have a decent amount of light. 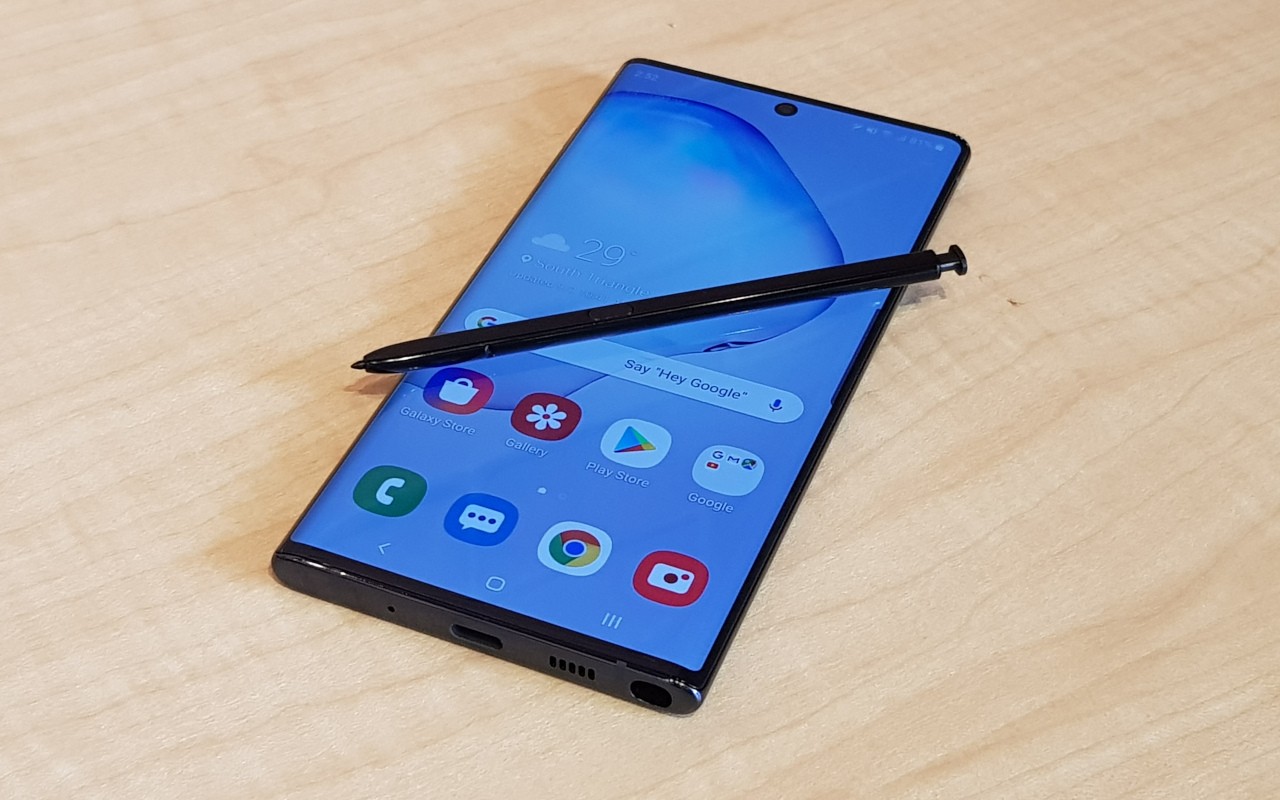 Since it’s powerful enough for almost any game, the phone is also fast and snappy for day-to-day use. Aside from general use, the Note 10 excels when it comes to productivity thanks in large part to the S Pen.

The S Pen brings tons of features aimed for working professionals such as an off-screen notes function (letting you jot down notes without turning the display on) and impressive handwriting recognition. If you prefer taking notes over typing on a phone, the Note 10 might just be the perfect smartphone for you.

Another feature of the S Pen is “air gestures,” which lets users control certain apps using the pen like a wand of sorts. While plenty cool, these gestures are a bit gimmicky; you probably won’t use these except for some very specific scenarios. 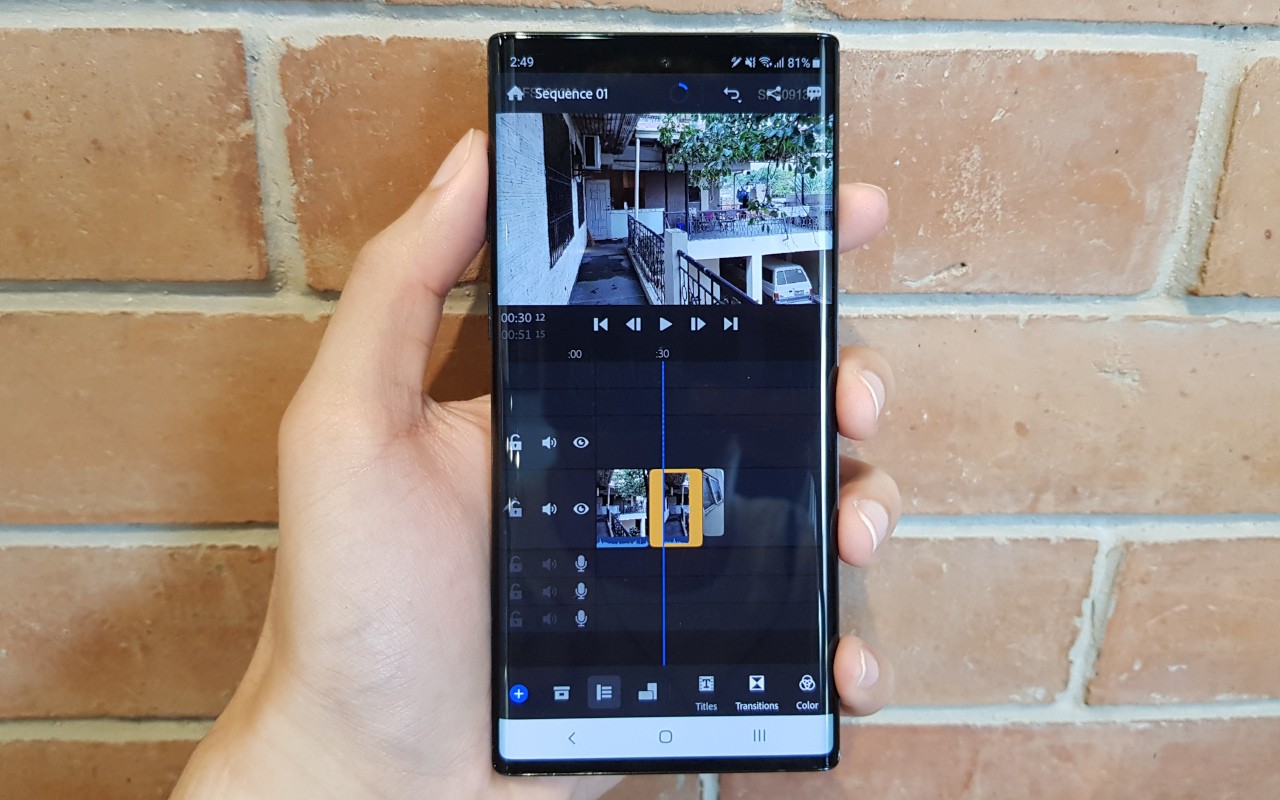 What’s not gimmicky is how helpful the S Pen is for photo/video editing. If you’re a content creator, having a Note 10 is a god-send as the S Pen will make editing images and videos much easier thanks to more precise control through the stylus. The S Pen coupled with the its powerful performance and great cameras makes this device nearly the perfect phone for content creators.

Only a couple of things prevent the Note 10 from being the absolute best productivity flagship. Its 3500mAh batter should be good enough to last a day, but if you’re planning to shoot or edit lots of photos/videos, you’ll need to carry a power bank. The Note 10’s lack of headphone jack is also a bummer, especially if you shoot videos on your phone, as it means you’ll need a dongle to connect an external mic. Finally, the lack of expandable storage might irk some, but at least the phone has 256GB of internal storage which should be enough for most. 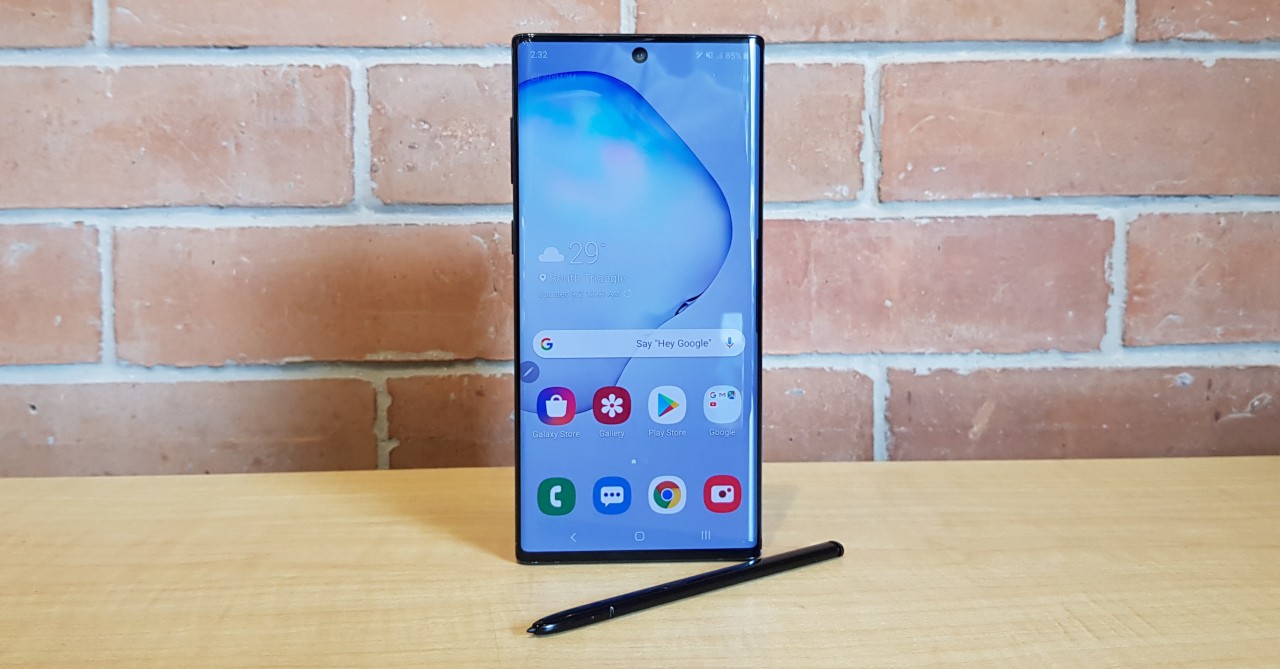 I’ll be honest, I was a bit underwhelmed with the Note 10 when it first launched. On paper, it seemed to lack quite a number of features such as a 1440p display and lack of expandable storage, not a good look given its premium price tag. Once I got to test the phone out for myself though, my opinion made a quick 180.

The Note 10 is an impressive package overall thanks to its powerful performance (for both gaming and productivity), attractive design, versatile cameras, and quality display (even at only 1080p). What truly elevates the phone though is the S Pen’s wealth of features aimed at productivity.

In spite of some shortcomings such as a lack of headphone jack, expandable storage, and average battery life, the Note 10 is still one of the best smartphones in the market right now, especially for working professionals and for content creators.

While it may not be that impressive on paper, the Note10 is still the king of productivity thanks to its top-notch performance, cameras, and design, not to mention that the S Pen adds tons of features that makes it a great partner for professionals and content creators. Geek Lifestyle Review: Samsung Galaxy Note 10