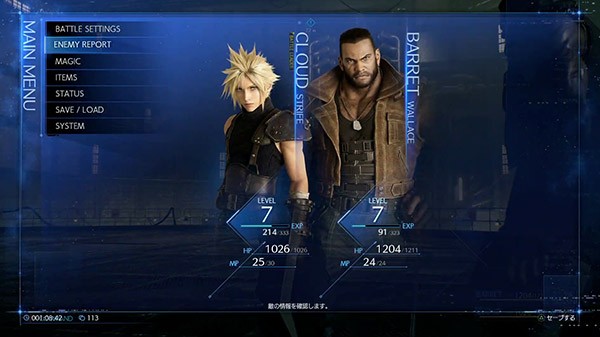 Here’s a rundown from Square Enix:

We got a glimpse at both “Easy” and “Normal” modes from the in-game option menus, and producer Yoshinori Kitase then showed us a new combat mode, named “Classic Mode.”

In the original Final Fantasy VII, you would wait around until the ATB Gauge fills up, and then select a move to initiate your attack. With Classic Mode in Final Fantasy VII Remake the team have re-created the same style of play!

In standard modes, the ATB Gauge fills up by repeatedly attacking your enemy, but in Classic Mode this aspect of gameplay is handled automatically. The player does not need to do anything and the character fights automatically, charging up their ATB Gauge.

Finally, we got a closer look at one of the boss fights in the game. In this segment we saw Cloud, Tifa and Aerith take on Aps in the sewers of Midgar.

Aerith’s standard attacks are long-ranged, and pressing the Triangle button uses her unique character ability “Tempest”. Her Holy Circle ability creates an area in the battlefield, and any spell used within the area is cast repeatedly.

During this boss battle, Cloud had the Ifrit Summon Materia equipped. And because of this, Cloud’s attacks caused his Summon Gauge to eventually fill up completely over time..

With a filled Summon, we saw Cloud summon Ifrit, who remained on the battlefield.

Summons are typically controlled by the AI, but we saw Cloud spend his ATB charges to make Ifrit use his unique abilities, such as Flare Burst and Crimson Dive!

Ifrit remained on the battlefield fighting until Cloud’s Summon Gauge depleted, at which point Ifrit unleashed his ultimate attack: Hellfire!

Each character can equip up to one Summon Materia each, and while playing Final Fantasy VII Remake it’ll be up to the player to decide which Summon to equip, depending on the battlefield and enemy!

I’m seriously hyped for this! And the new merch and PlayArts KAI figures ain’t helping me douse the excitement!

Final Fantasy VII Remake is due out for PlayStation 4 next year on March 3.