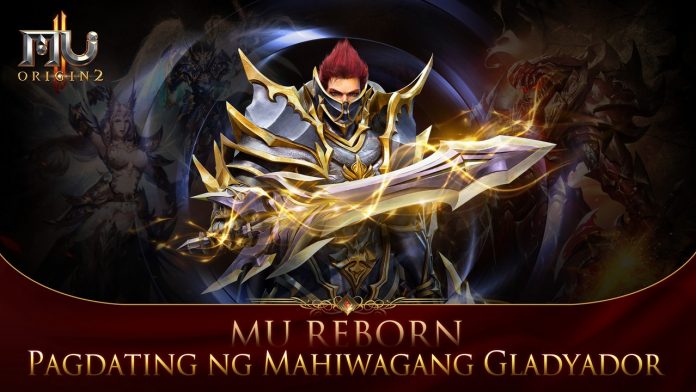 Authorized by Webzen and developed by TianMa, MU Origin 2 is published by Ourpalm. And the game just received a huge update recently that delivered tons of new content to explore and foes to fight. But perhaps one of it’s biggest highlight is the addition of the Magic Gladiator (ang Mahiwagang Gladyador in Filipino), a new character that is now ready to lend his strength to players. But first, let’s take a look at what this magical swordie has to offer.

Defending on what kind of weapon he is wielding, whether it’s a ATK weapon or MAG weapon. Here are the Magic Gladiator for ATK weapons:

Meanwhile, here are the skills of Magic Gladiator (MAG) Weapons:

Since Pinoy MUtizens really love the game, MU Origin 2 also now supports Filipino language, meaning it is now even more accessible for any and every Pinoy mobile gamer! Localization is definitely a great thing, as it’ll let a lot more players try out this awesome mobile game for themselves, especially with its new update.

The game also has a bunch of new features like the Star Destiny tower mode where in-game couples can raid this special tower together; but do note that only couples can enter this special place.

Into the Abyss: Darknight Wave Witch and Phantom Prince

If you think you are tough enough, you can venture to the new map Abyssal Realm: Goddess Cape and Tahm Temple. There players can challenge the new bosses Darknight, Wave Witch, and Phantom Prince.

Also, only available for Philippine players is a special item called Palm Leaf that will drop during September 5-18 after defeating monsters. This item gives bonus experience points for party members of each Magic Gladiator by 1%, and it can also be exchanged for rewards during the event period as the item says.

With this new update that is packed with new and exciting features (especially the new Magic Gladiator), MU Origin 2 just became even better! Now is definitely a great time to join in on the hype, or maybe return to the game if you’ve played it before.

- Advertisement -
Previous articleSmallville’s Tom Welling will return as Superman in Arrow’s ‘Crisis on Infinite Earths’
Next articleLeague of Legends Worlds 2019 – The Teams Are In!