These are actually pretty good! 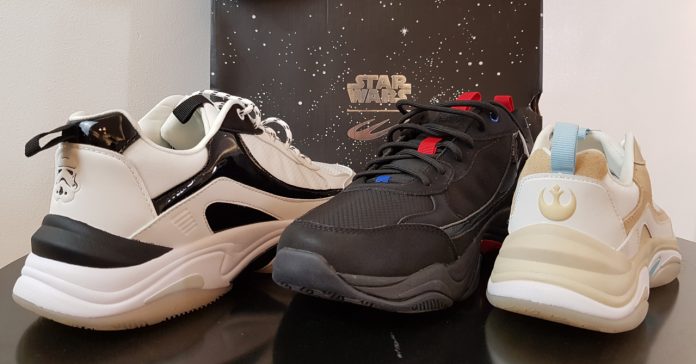 International sneaker brands such as Adidas and Nike have recently released lots of geeky sneaker lines such as their Game of Thrones and Stranger Things collabs respectively. Now, another brand is getting in on the action, and it’s none other than local shoe retailer, World Balance!

For its latest collection, World Balance teamed up with Lucasfilm for some snazzy Star Wars sneakers! The World Balance x Star Wars collection features chunky sneakers with desgins based on the Imperial Stormtrooper, Darth Vader, and Rey.

Up first is the Stormtrooper sneaker which features a black and white colorway with what seems to be patent leather accents at the side. Adorning the back and the insole of the sneakers are the iconic Stormtrooper helmet. This pair is available in both mens and womens sizes.

The Darth Vader World Balance sneaker meanwhile, features a primarily black colorway with red and blue accents. Similar to the Stormtrooper, the Vader sneaker has his helmet emblazoned at the back and in the insole. Unlike the Stormtrooper pair, the Darth Vader kicks are available in mens sizes only.

Finally, the Rey kicks are the most striking of the bunch. Available only in women’s sizes, the Rey sneaker features a white, brown, and blue colorway with suede accents. The back of the sneakers have logos of the Resistance, and the insole features a print of Rey herself.

These World Balance x Star Wars sneakers will be released in stores on October 20, 2019 and will be priced at PHP 2,699. No prices have been announced, though we expect these sneakers to be more on the affordable side.

- Advertisement -
Previous article
Maleficent: Mistress of Evil Review – Game of Thrones-meets-Disney, but Disney Wins
Next article
PH Board Game Podcasts to listen to during your daily commute