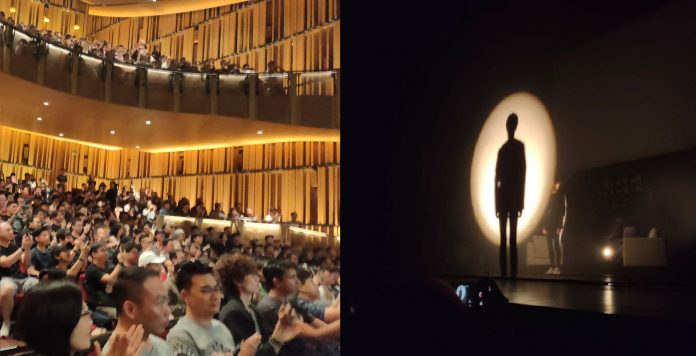 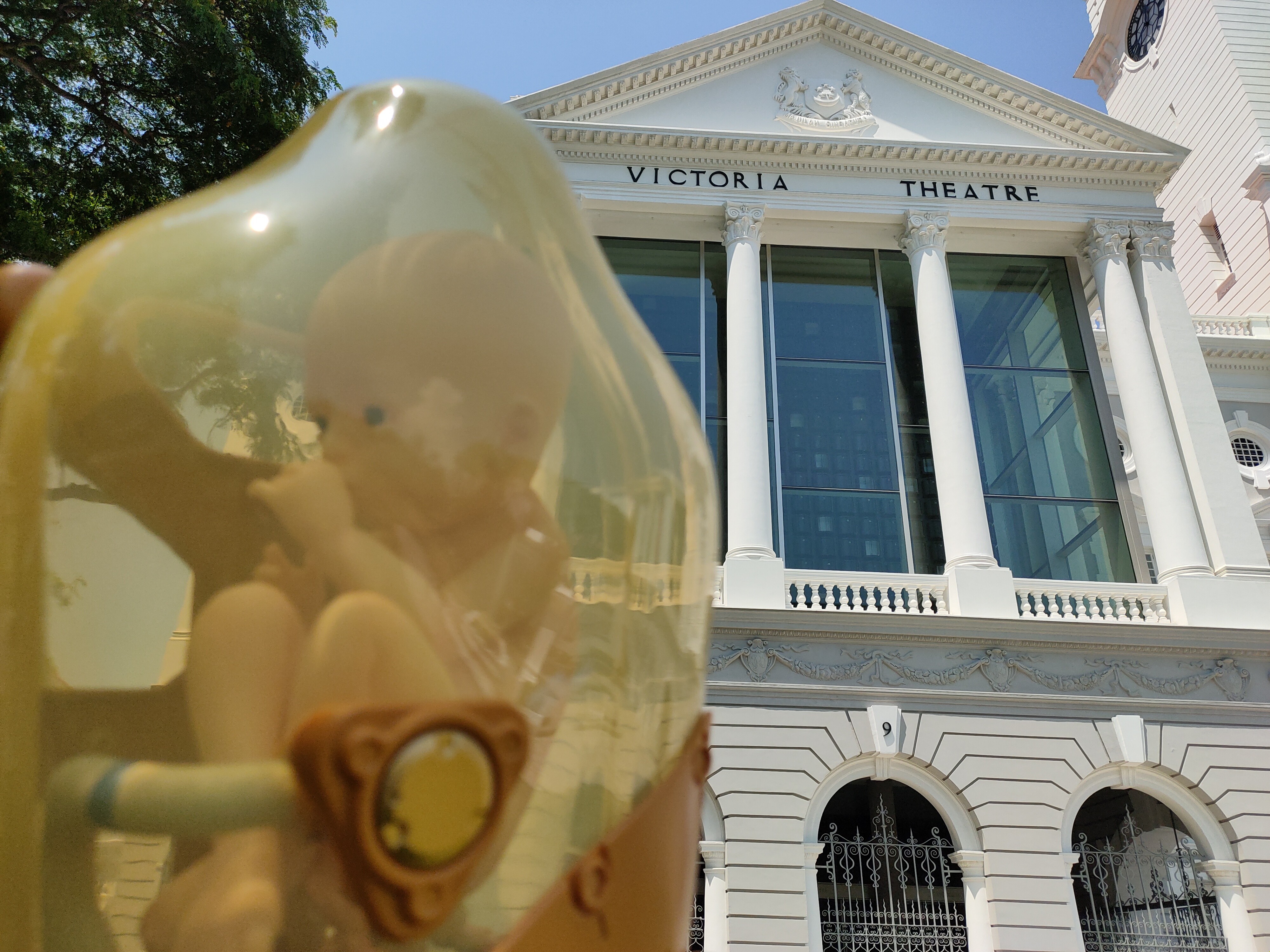 Victoria Theater – The Death Stranding: World Strand Tour is in full swing right now with Singapore as its next stop. Luckily, the guys at UnGeek got invited in this once in a lifetime event. Being a Kojima fanboy myself since the glory days of PlayStation One, I surely cannot pass this up! Because honestly, I might really not have the chance next time… Because aside from him being one of the most respected people in the business, he is also one of the most elusive game developers out there.

Checking their first stop over at London, I really can’t find any content or information on what happened during their first leg… Which made me curious now on what the actual awesomeness went down. And now that we got first-hand experience, I am really delighted to share with you all these important details, from one fan to another! 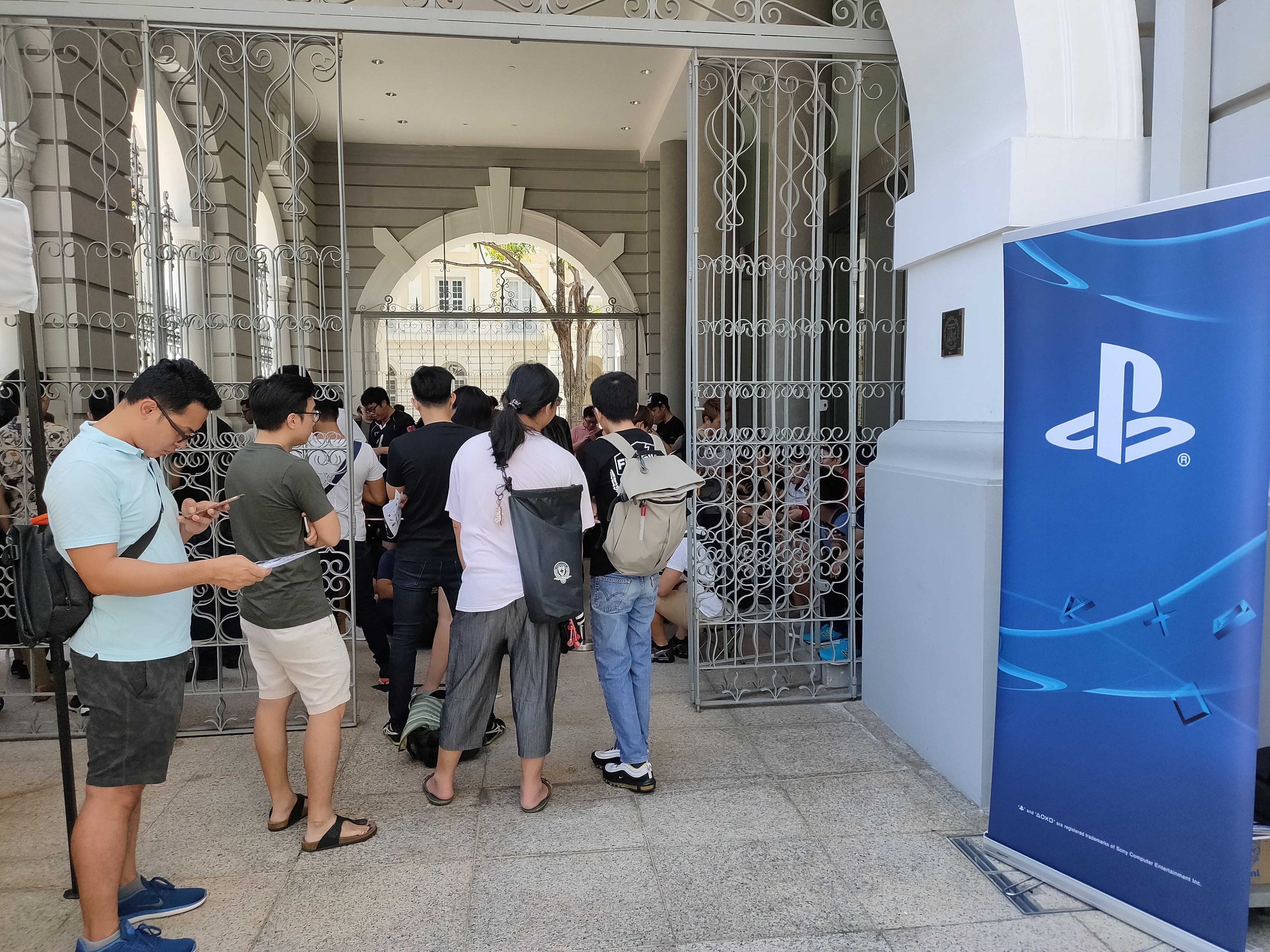 First off, upon going to the venue I instantly noticed how organized the line was. I was told that fans were building up as early as 7am, talk about dedication!

For this part of the tour, approximately 500 free tickets were allocated for the event. There actually 2 sets of lines – one for the walk-ins which you can see above… 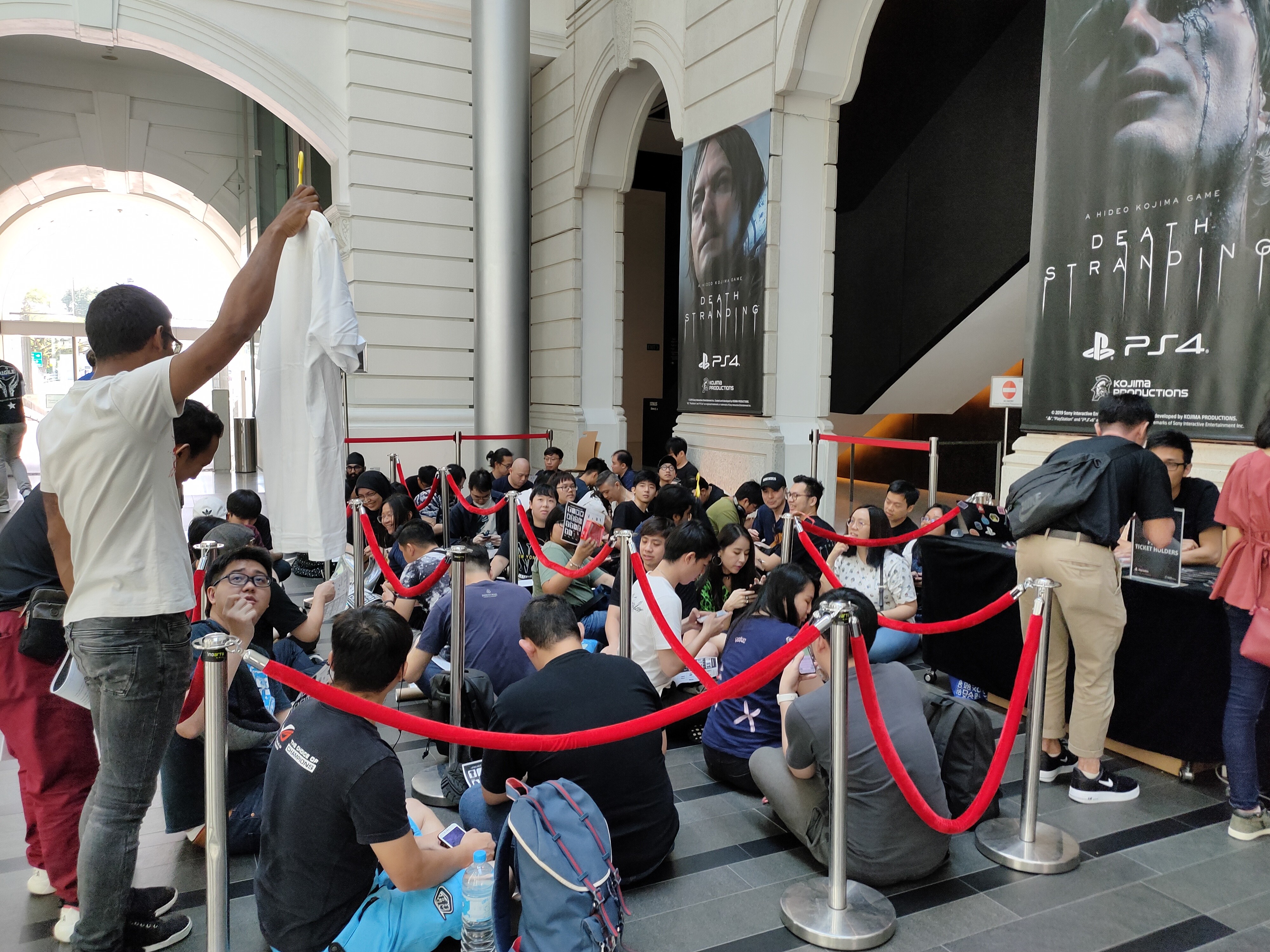 …And one group for those who registered online via Peatrix, which made up half of the tickets released. Both were actually very well-handled by the staff at PlayStation Asia. Whether you are a fan or part of media, it was a breeze entering and preparing for the event.

Baby on board! We're here at Singapore for the Death Stranding: World Strand Tour.

Here’s an early live video I took during the earlier part of the event. Where you can see everything is well-handled, from the lines to the merch. 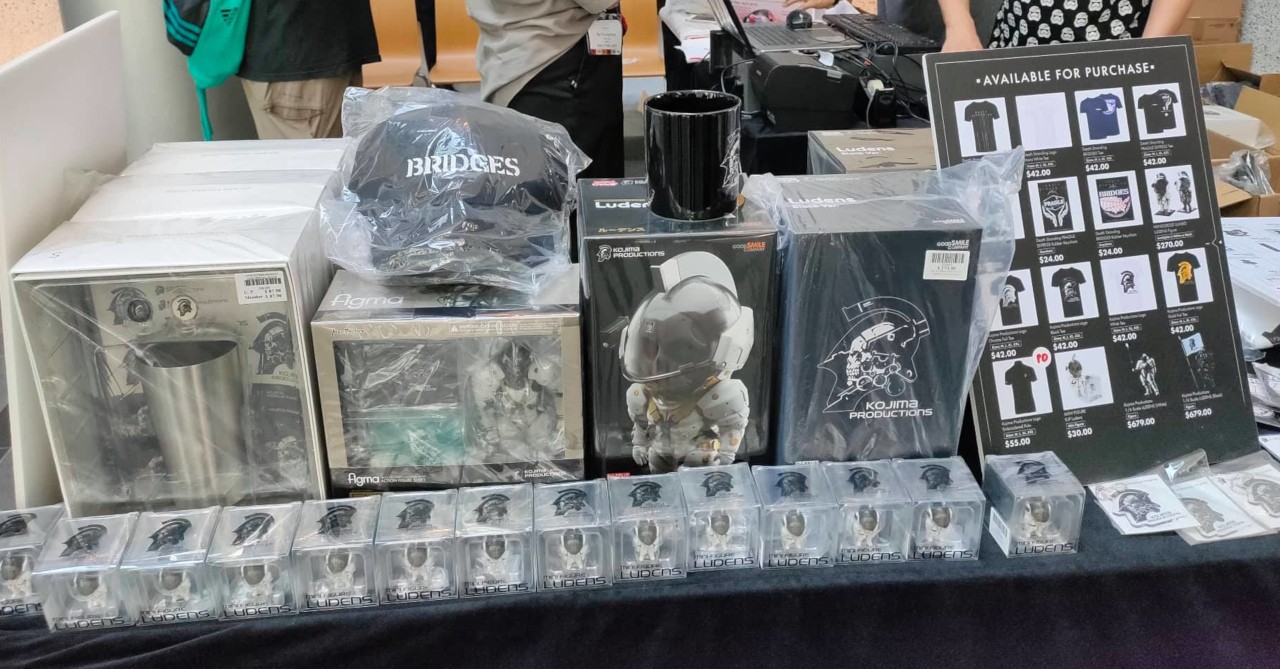 Speaking of merch, inside the halls at the Victoria Theatre, on one of the corners you will see the Kojima Productions merchandise booth. I was told that of all the merchandise sold there, the first ones that ran out really fast were the EX-044 Figma Ludens figure and the Sam Bridges Cap. For those who want a more detailed look at all the cool swag they had on offer, here’s our feature on the merch.

Still roaming at the halls, there were actually a few fans who went the extra mile and cosplayed as one of the characters in the game. Take a look at Deadman, brought to you by one of our media friends over at The Kampung Nerd. 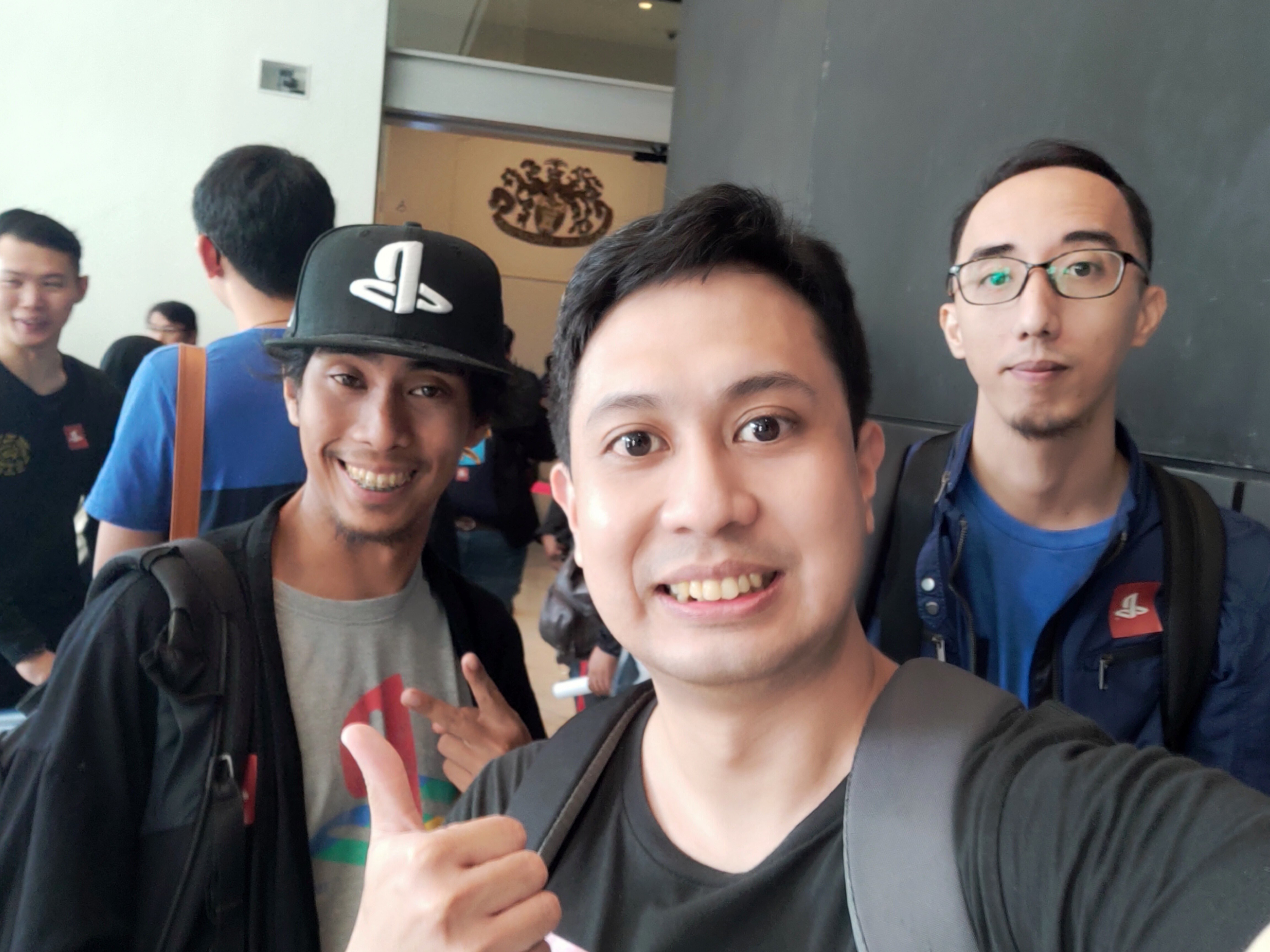 Before the actual event started, at around 4pm all of the media who were invited were gathered for a private meet and greet session with The Boss. This was the perfect opportunity to get some selfies with other local media personalities from the Philippines. Here’s Gloco (left) from Gloco Gaming/Fishing!? and Chris (right) from Gadget Pilipinas.

Also around this time, we were informed that another, famous personality is also present during the event – none other than renowned artist Yoji Shinkawa! Needless to say, it was really more than any fan could ask for and I was blown away that he was also there. I’ve been following his work since I saw the wonderful art he did for Metal Gear Solid, and with him and Hideo Kojima in one roof!? Everything was gravy at that point for me.

Since there were a lot of media people during that time (also the fact that the actual panel with the fans is just about to start), we were only given a few precious minutes with Hideo Kojima and Yoji Shinkawa. There were also strict rules like no touching and that only Kojima Productions and Death Stranding merchandise were to be signed, which was definitely cool with me!

When I was given the cue I walked towards Hideo and Yoji. To my disbelief and amazement, both of them extended their hands for a firm handshake. Me on the other hand was just shaking and at the same time relishing the moment. Really, all I could say to Mr. Kojima during the short span of time was “Thank you making great games”.

We then proceed to some photo ops. They gladly obliged that we do the thumb suck pose in unison. Being in one frame with both of these legendary people, I really could not ask for a better 2019!

And to further immortalize the moment. We also got to have our stuff signed! Quoting Gloco, I will follow suit and treat this peice as a family heirloom! Now to find a good and protective display case.

At around 5pm, the event proper was about to start and we were informed to go in and take our seats. I was guided and seated easily (again, props to PlayStation Asia for handling the event well), with my wristband indicating where I should go. I was comfortably seated at the right part of the second row, which is a really good spot. 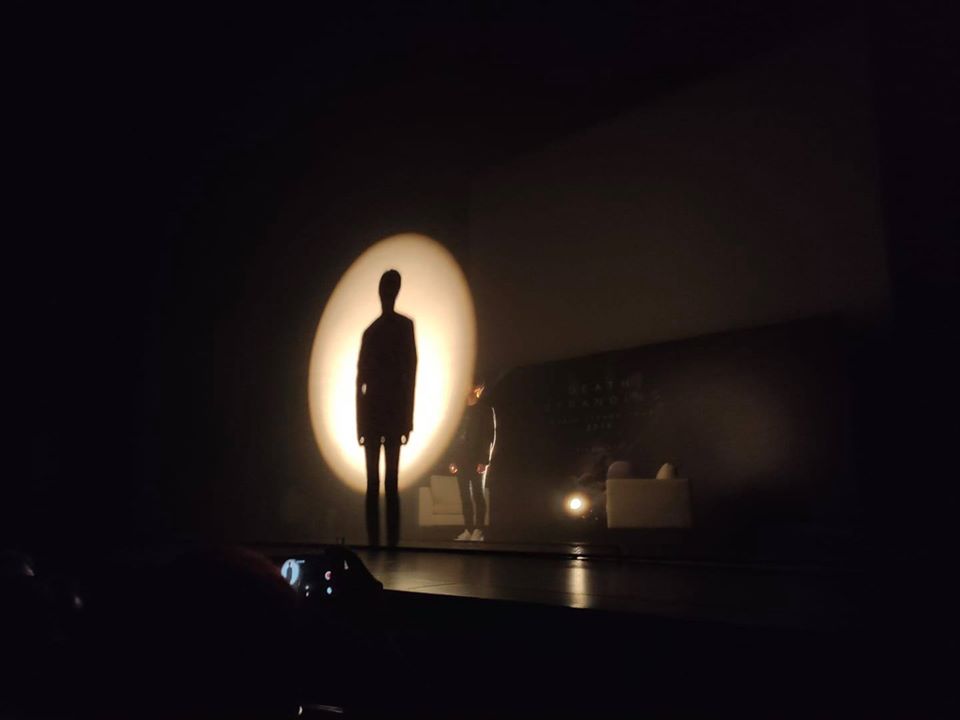 After a few minutes, an eerie entrance music played and then suddenly a spotlight flashed on stage with the silhouette of Hideo Kojima at the center. 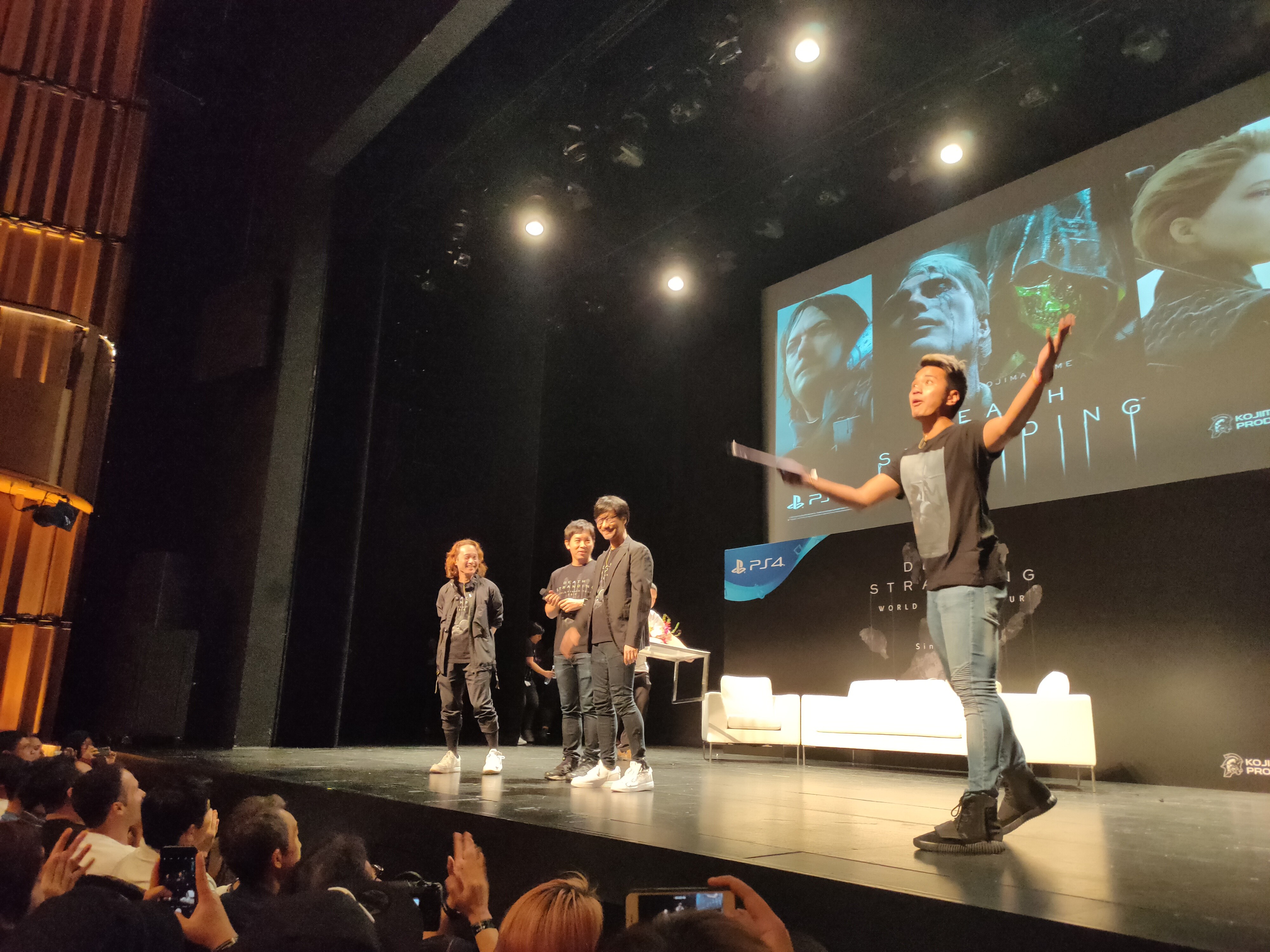 It was also at that point where everyone was out of their wits and screaming, everyone including yours truly. WHAT. AN. ENTRANCE. It was really something if you were there at the actual event but for those who cannot make it, I gotcha fam!

You wont have to miss out as I have the whole 36-minute panel discussion from start to end! And yes that includes the amazing entrance. Check it all out at the video above!

Nearing the end of the program, as a special surprise to everyone who attended the Death Stranding: World Strand Tour, all 500 attendees got a photo op with both Hideo Kojima and Yoji Shinkawa… ALL 500! What a way to give back to back to the fans! 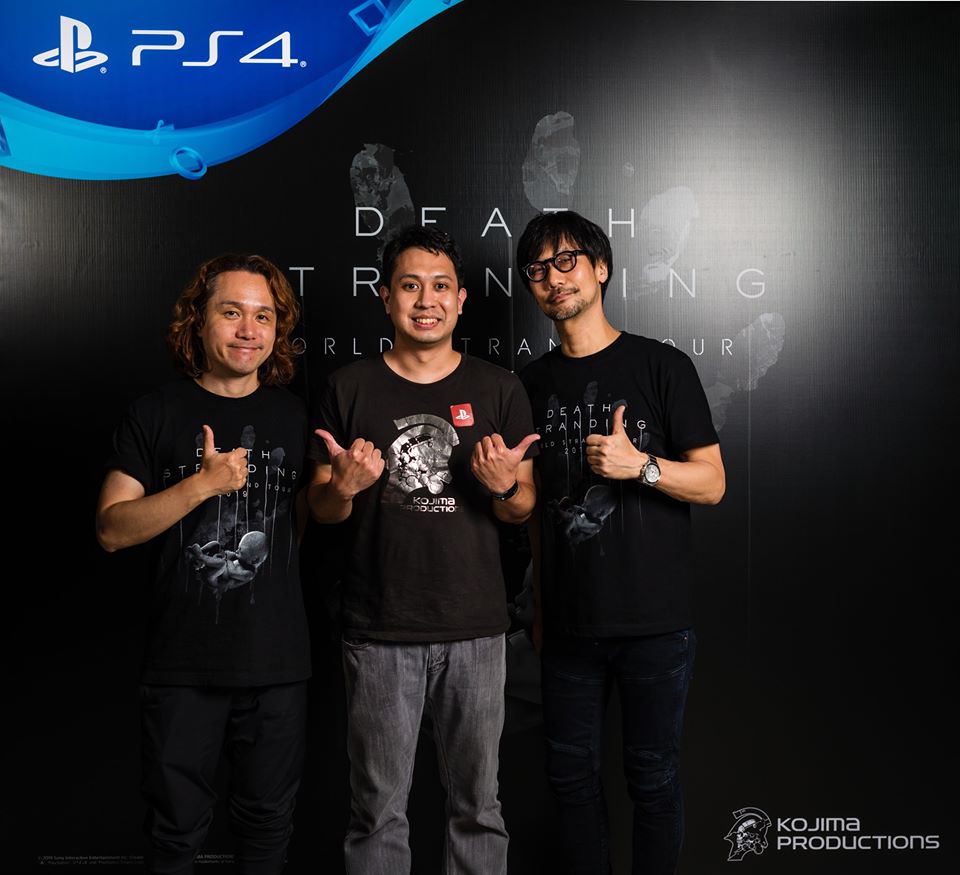 For those who went there and want to see the images, check out this link from the PlayStation Asia Facebook page as they uploaded everything in one album. Alternatively, you can also download the full-resolution pictures here.

World Strand Tour: The Aftermath. With GLOCO Gaming and Chris from Gadget Pilipinas.

Here’s our post-event reactions. Speechless, surreal and very thankful to say the least. Again a big thanks to Chris from Gadget Pilipinas and to Gloco Gaming.

What a great time to be a gamer! Death Stranding: World Strand Tour continues in Taipei for its second to the last leg. The game is available now for the PlayStation 4, which a PC release to follow. Still on the fence to get the game? Here’s our detailed, but spoiler-free review.

Shout out to PlayStation Asia for the wonderful opportunity and to Realme for lending the Realme 5 Pro.