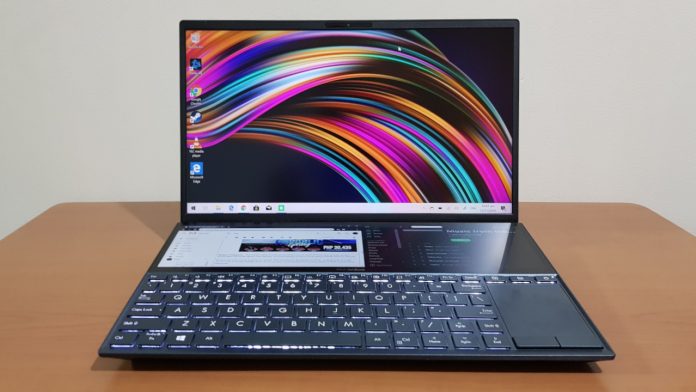 Back in May at Computex, ASUS unveiled the ZenBook Pro Duo and ZenBook Duo, an impressive pair of laptops that packed a large secondary display. After getting a longer hands-on with the units last September, we finally got our hands on a ZenBook Duo unit for extended testing, specifically the UX481F (Core i5-10210U + MX 250) model which is the most affordable in the PH lineup. 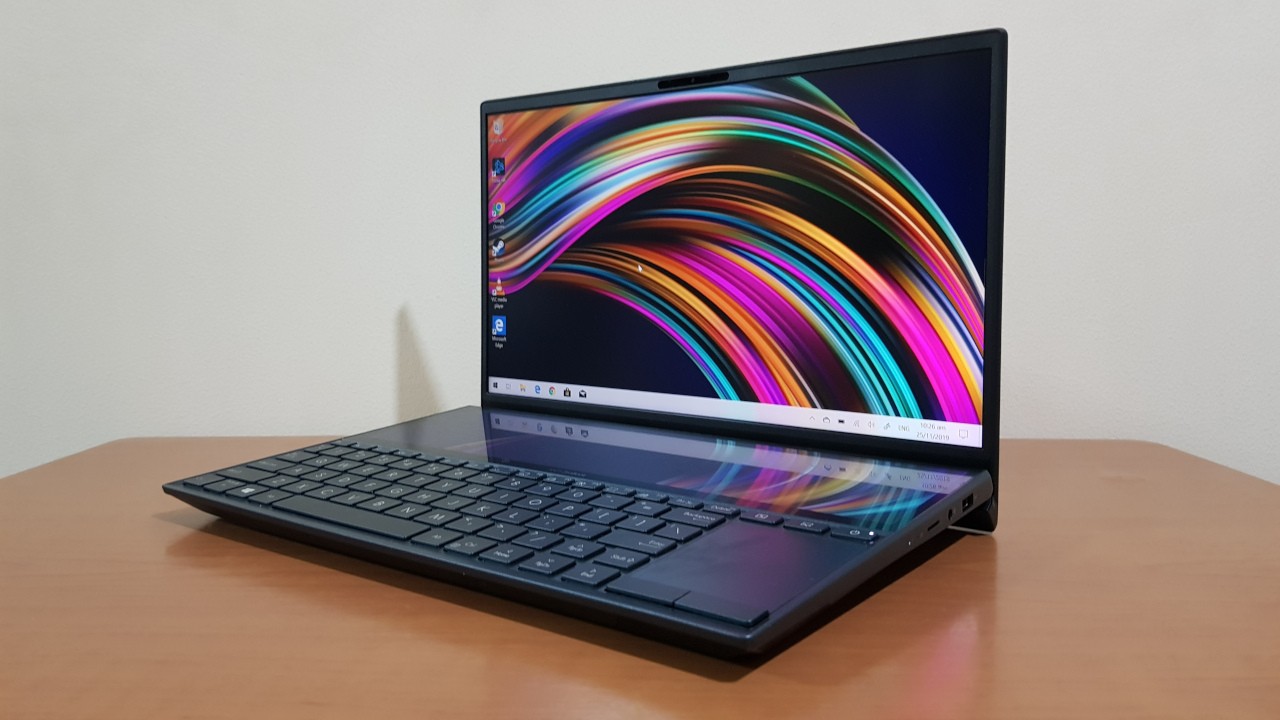 While the Pro Duo is the highlight model of the two given its i7 CPU and RTX 2060 processor, we are actually slightly more interested on the ZenBook Duo. That’s because this model is smaller, lighter, and more affordable, all while having the large secondary touch display (aka the ScreenPad Plus).

Having a second screen is great and all, but does the ZenBook Duo deliver in other areas as well? We find out here in our full review! 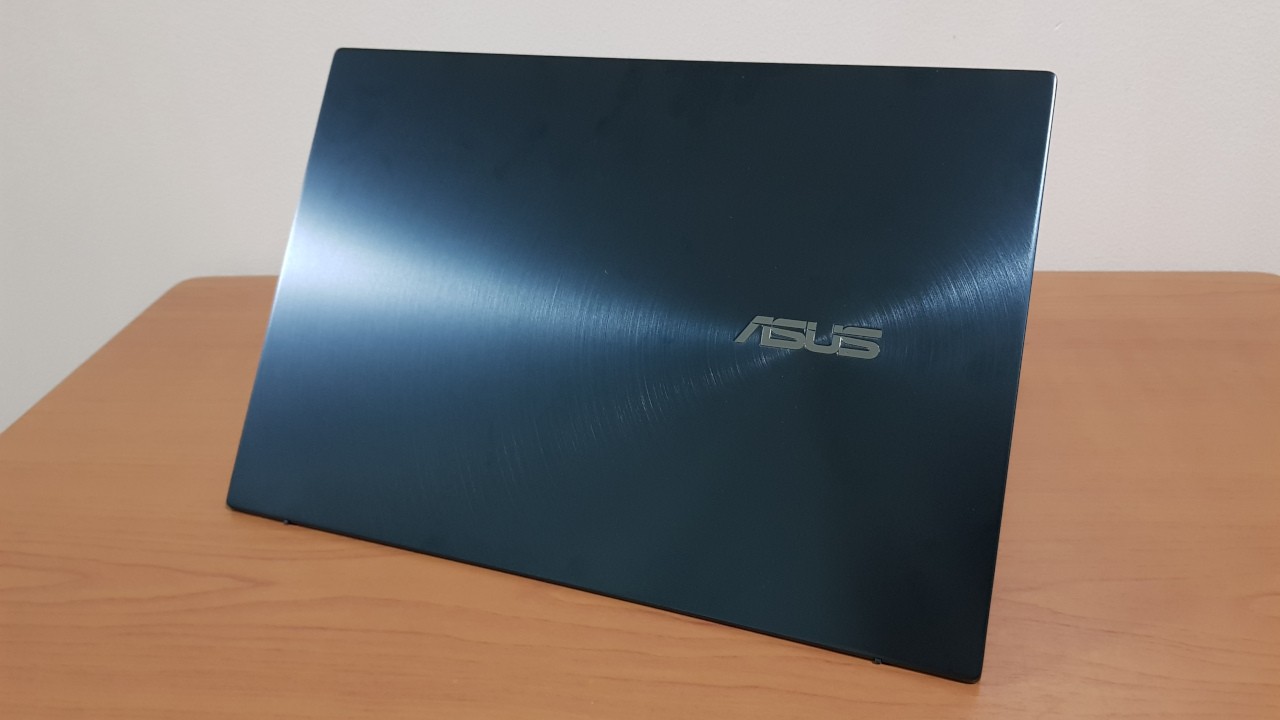 From the back, the ZenBook Duo shares the signature concentric circle design of ASUS’ ZenBook laptops, making it quite a looker while still maintaining some subtlety. Aside from looking good, the Duo’s metal finish also feels premium and fairly durable. 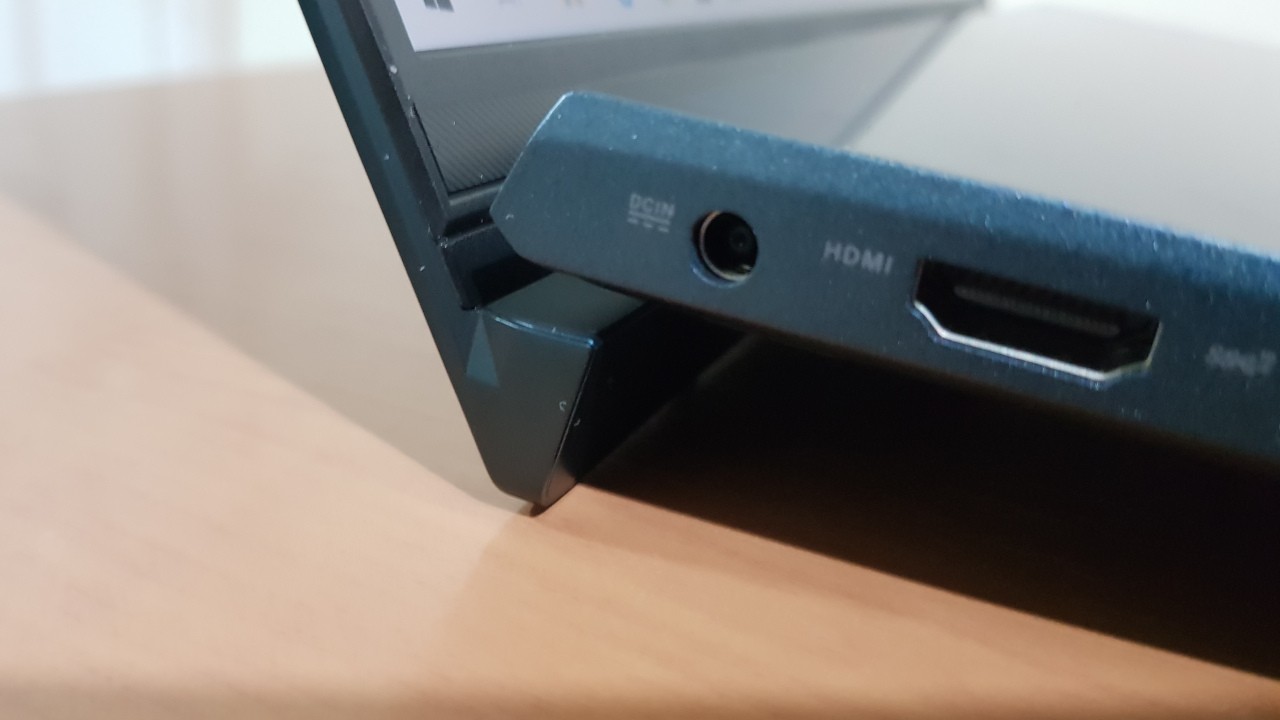 The Duo also shares the ZenBook line’s signature ErgoLift hinge, though the duo’s hinge lifts up higher to make the second screen easier to see. It helps a bit, though I would’ve preferred the hinge to lift up higher for better readability on the secondary display.

For I/O, the ZenBook Duo has a decent amount of ports, including 2 USB Type-A ports, a Type-C port, an HDMI port, a microSD card reader, and a 3.5mm headphone/mic jack. I would’ve wanted another Type-A port or maybe a DisplayPort, but the fact that it still has an HDMI port and a microSD card reader means it actually has more I/O options than other ultrabooks in its price range. 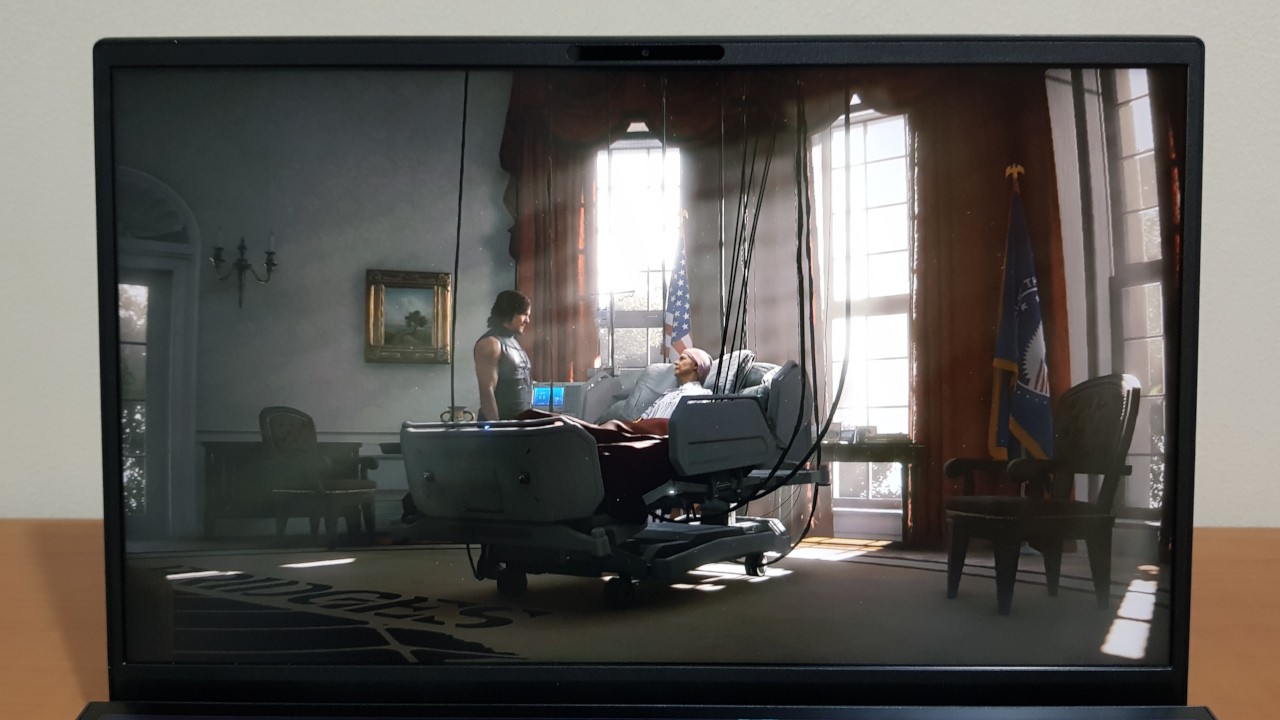 The ZenBook Duo’s main display is a 14-inch LED-backlit FHD screen with slim bezels, making for a 90% screen-to-body ratio. For binge-watching movies/shows, the display works well as it has a sharp and detailed video output with good colors. The display also gets decently bright, good enough for use in most situations (except maybe exceptionally bright days).

While not exactly needed for binge-watching, the display is Pantone-certified, making it a good screen to edit photos/videos on for content creators. 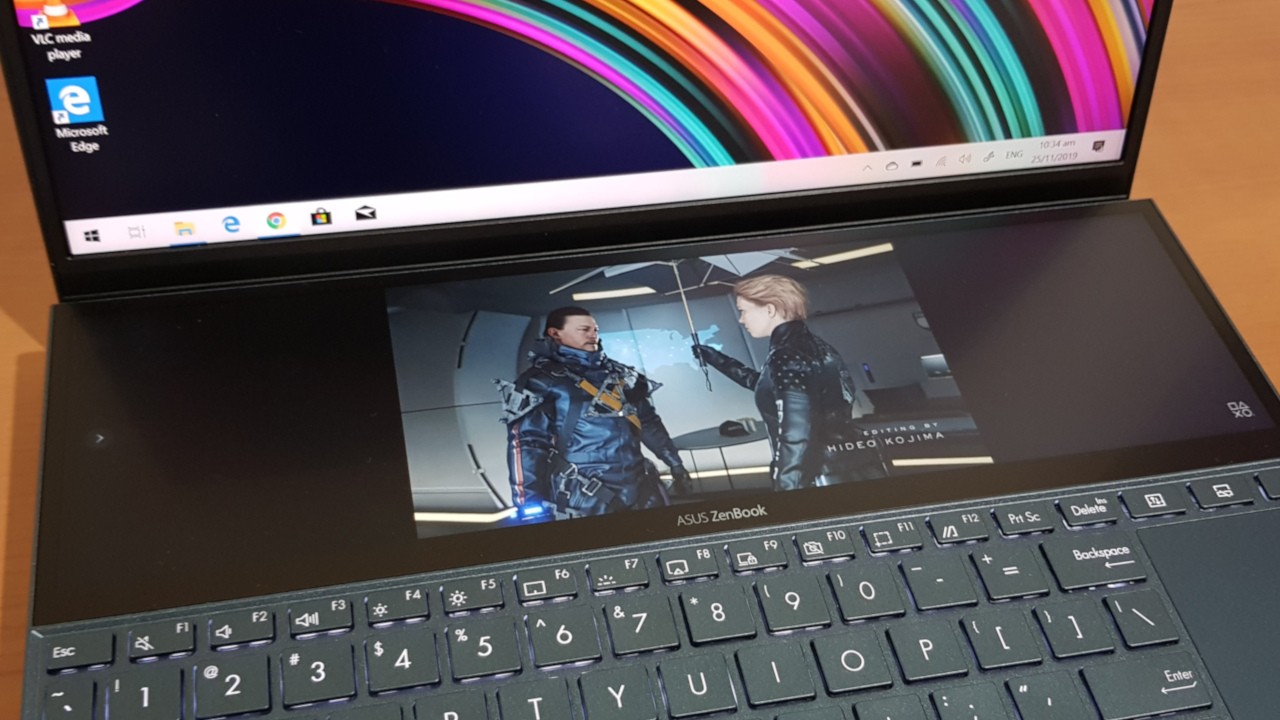 As for the ScreenPad Plus, this secondary screen is a FHD touch display that measures in at 12.6” diagonally. Given the Full HD resolution, the screen is plenty sharp, though color output isn’t as good as the main display. Not that you’d really need great colors here as you shouldn’t be binge-watching on this display anyway. But if you do choose to watch some videos on the ScreenPad Plus, it does a fine enough job, even if the wide aspect ratio means most videos will look rather small on it. 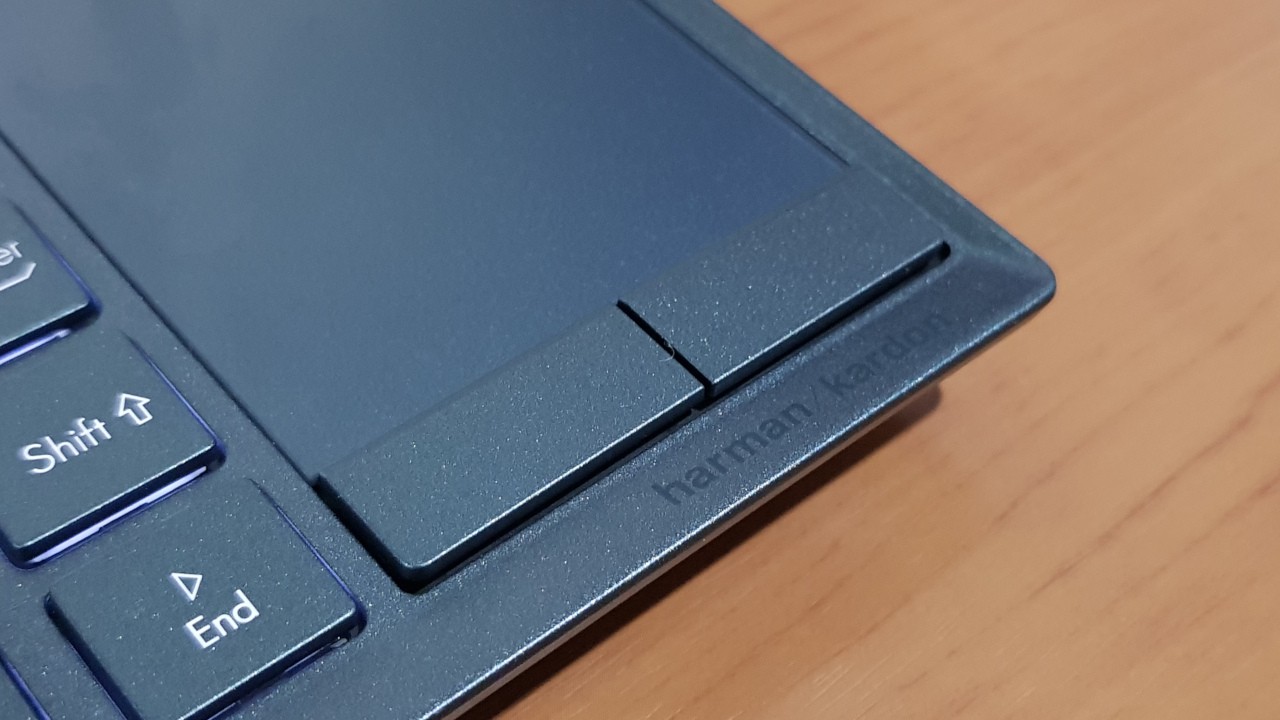 ASUS equipped the ZenBook Duo with harman/kardon onboard speakers, and they deliver in sound quality. Audio through these speakers are clear without much distortion even at higher volumes. The trade-off is that the speakers are on the quiet side. If you’re gonna binge-watch on this laptop, headphones or external speakers are recommended. 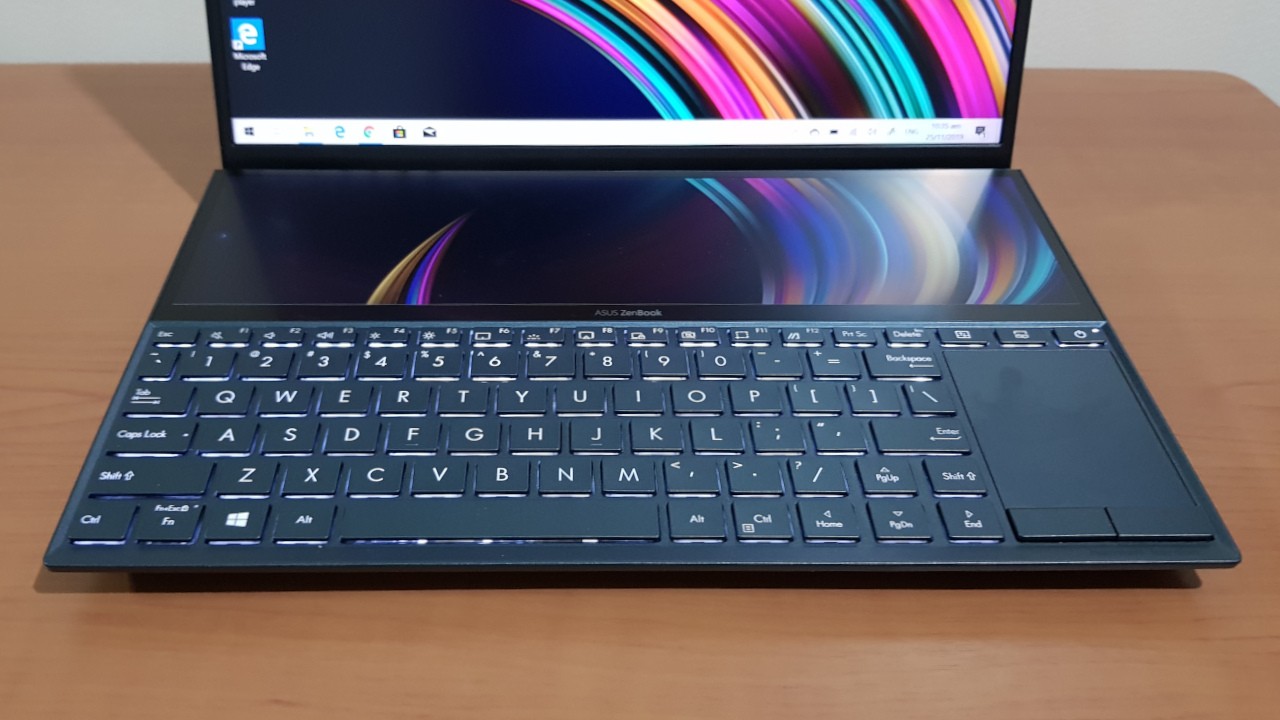 Given the ScreenPad Plus’ position, the ZenBook Duo’s keyboard is placed at the bottom, with the trackpad squeezed onto the right side. The keyboard has some pros and cons, the main positive being that it’s one of the best ultrabook keyboards I’ve tried in terms of tactile feel. Typing on the ZenBook Duo is a dream thanks to the satisfying click of each key when pressed. Another plus is that even if it’s quite a cramped keyboard, the individual keys are still decently sized. 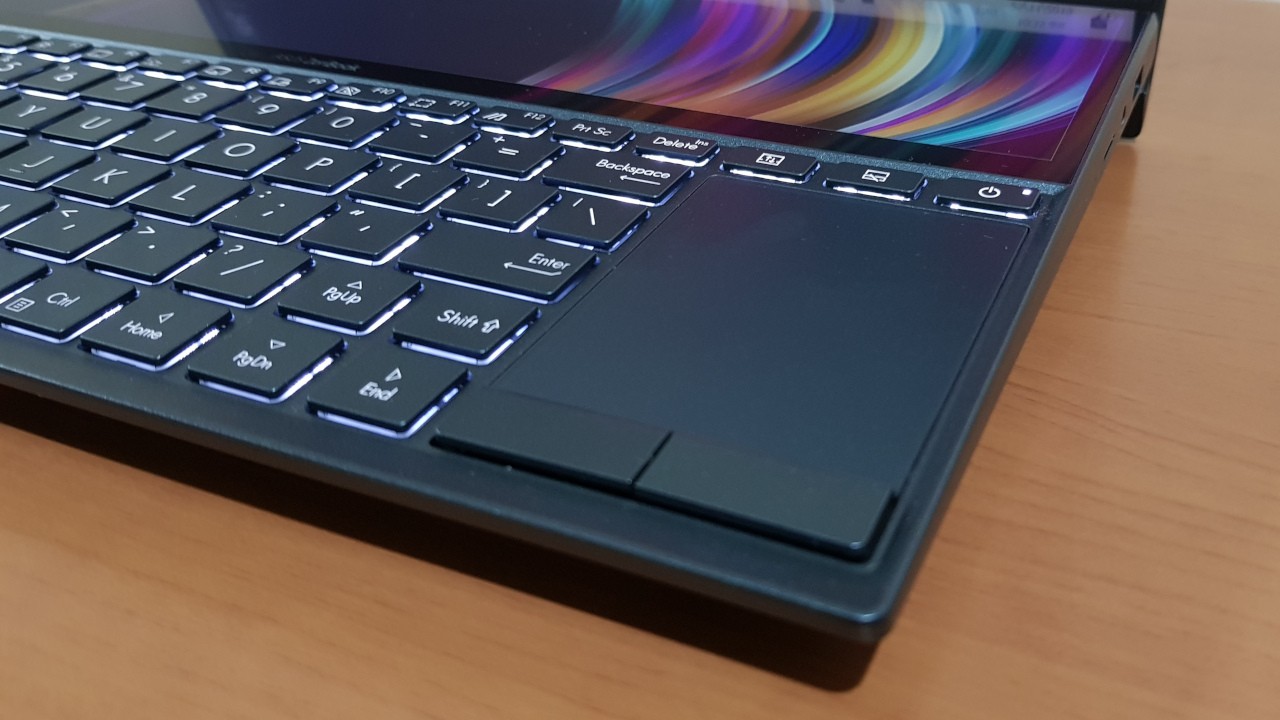 Now onto the cons. Given how cramped the keyboard is, touch typists can get a bit frustrated with the small Right Shift key. While typing, I often found myself pressing the Up arrow key instead of Right Shift. It’s a fairly minor issue, but it does require a bit of adjustment when typing.

The keyboard’s position is also not optimal for longer use as there’s nowhere for your wrist to rest (unlike with most laptops). This can be remedied by using a wrist rest, but our unit did not come with one inside the box.

The ZenBook Duo is not a gaming laptop, but it does have a dedicated NVIDIA MX 250 GPU, so I just had to test it out for some light gaming.

To my surprise, the ZenBook Duo was actually a pretty capable laptop for gaming; at least for esports titles. On Overwatch for example, the Duo ran the game at a solid 60-70 FPS on Medium. While the laptop has enough power to run typical multiplayer games, it will struggle with triple-A titles (such as Rise of the Tomb Raider) even on Low unless you turn the resolution down to 720p. 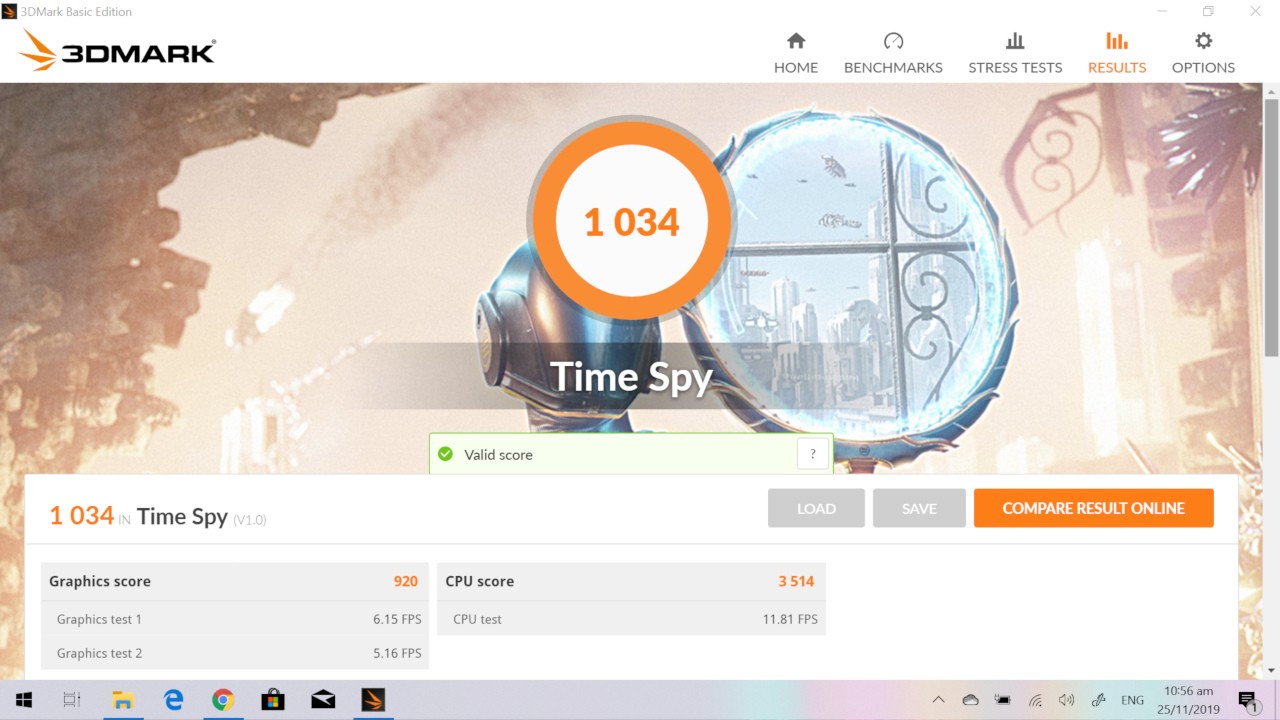 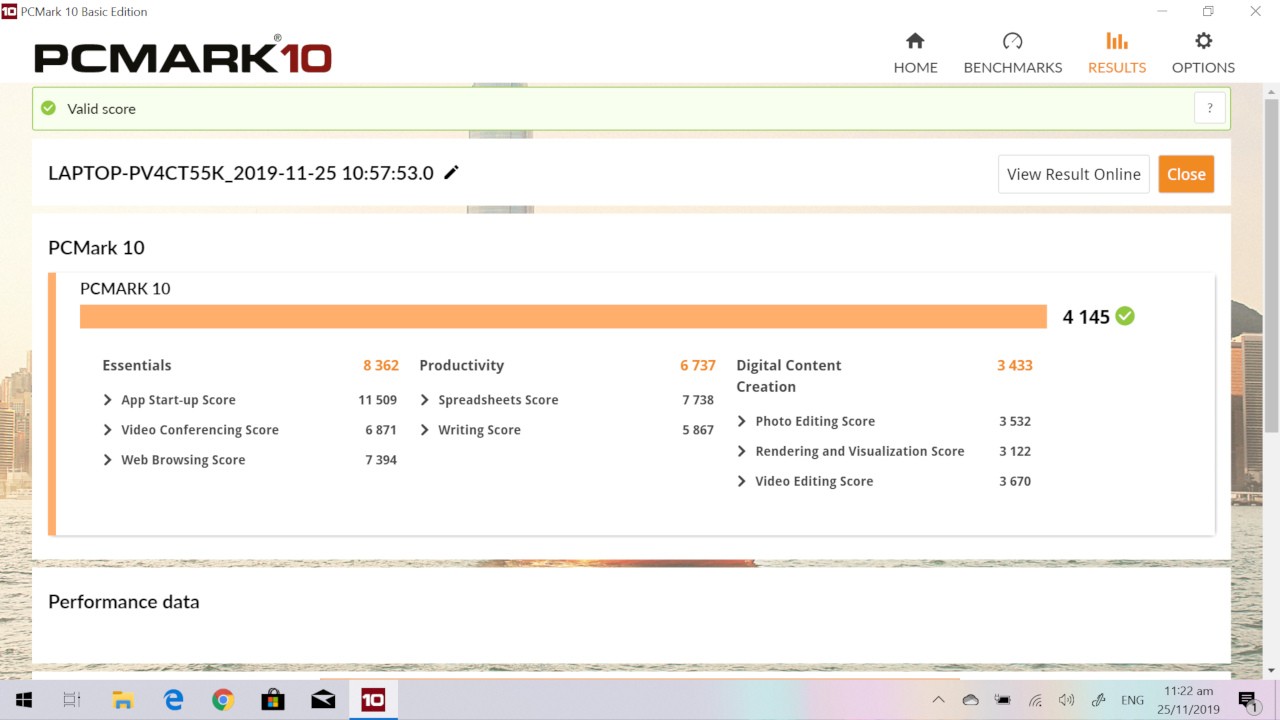 In benchmarks, this configuration of the ZenBook Duo scored 1034 on 3DMark Time Spy and 4145 on PCMark 10. The low 3DMark score is no surprise given the entry-level GPU in the Duo, though the PC Mark 10 score is quite decent. This means that the ZenBook Duo should be able to handle day-to-day use with ease along with some photo and video editing.

As I expected based on the PCMark 10 score, the ZenBook Duo made quick work of everyday tasks such as web browsing and word processing. It was also able to handle photo and video editing too (with 1080p video files) without slowing down much, all while there are apps open on the ScreenPad Plus.

It’s a good thing the Duo can handle multiple apps open on the ScreenPad Plus as the secondary screen is incredibly useful. Thanks to the ScreenPad Plus, you can open up to three apps at the same time, making multi-tasking a breeze.

While three apps open is the max, I prefer just having two open on the bottom display as the screen is a bit on the small side. Still, it definitely beats having to switch between tabs on a standard, single-screen laptop. With the ZenBook Duo, I was able to drag and drop working files on a photo editor, saving me the hassle of alt-tabbing in between. Plus, I was even able to control the music I was listening to all while still editing photos. 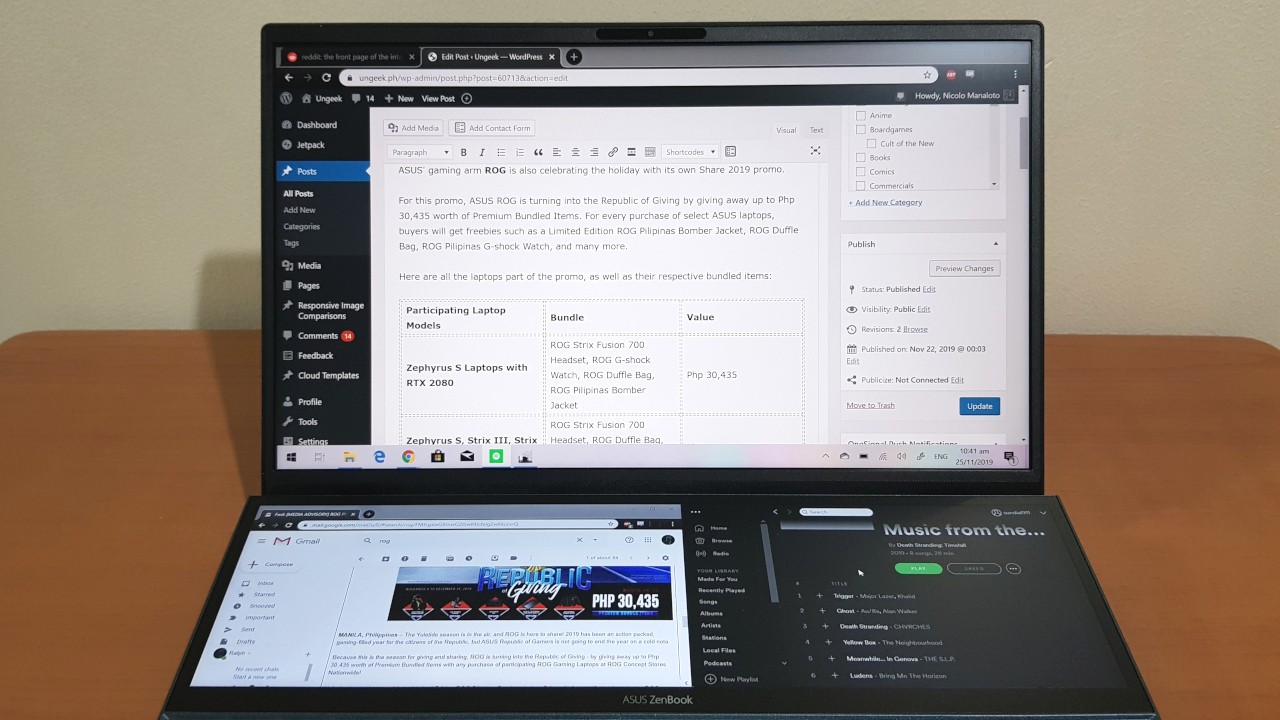 The secondary screen also proved useful for writing articles. For instance, I opened up an email on the ScreenPad Plus regarding an article I was supposed to write. With a standard laptop, I would’ve had to switch between tabs to check what I was writing. Though with the ScreenPad Plus, I just had to glance down to check what i was supposed to write. Having a secondary display such as this definitely makes a writer’s workflow easier.

Another nifty feature of the ScreenPad Plus is the ScreenXpert control software. This software brings lots of useful features such as Task Group which lets you save the current open apps on both screens. Once a Task Group is saved, you can just re-open your saved configuration of programs with just one click.

The only annoying thing about a Task Group is that it doesn’t get saved when you put the laptop on sleep mode; once it wakes up, all the programs on the ScreenPad Plus will shift to the main display.

Aside from Task Group, ScreenXpert control also has other features such as a NumPad and a Handwriting app. The Handwriting app automatically detects what you wrote on the touch display, and it’s pretty accurate for the most part.

Using the ScreenPad Plus as a secondary display or using ScreenXpert control features aren’t the only thing you can do with the ZenBook Duo. ASUS also partnered with a number of software companies so that select programs can take full advantage of the laptop’s dual screen. An example is Corel VideoStudio Pro 2019 which lets editors view the timeline on the main screen while color grading on the bottom display. Right now though, there aren’t a lot of programs that are optimized for the ZenBook Duo.

Given the feature-packed secondary display, I was a bit worried that the ZenBook Duo will run out of juice quickly; after all, it does have to power two screens. In my test though, I was impressed at it lasted quite well in our battery test.

After running a two-and-a-half-hour movie at 50% volume and brightness, the ZenBook Duo still had 70% remaining (around 7 hours according to Windows), and that is with the ScreenPad Plus on. This should mean that the laptop can run on one charge for upwards of eight ours with proper battery management, more if you turn off the ScreenPad. The result is definitely an impressive feat for a dual-screen laptop. 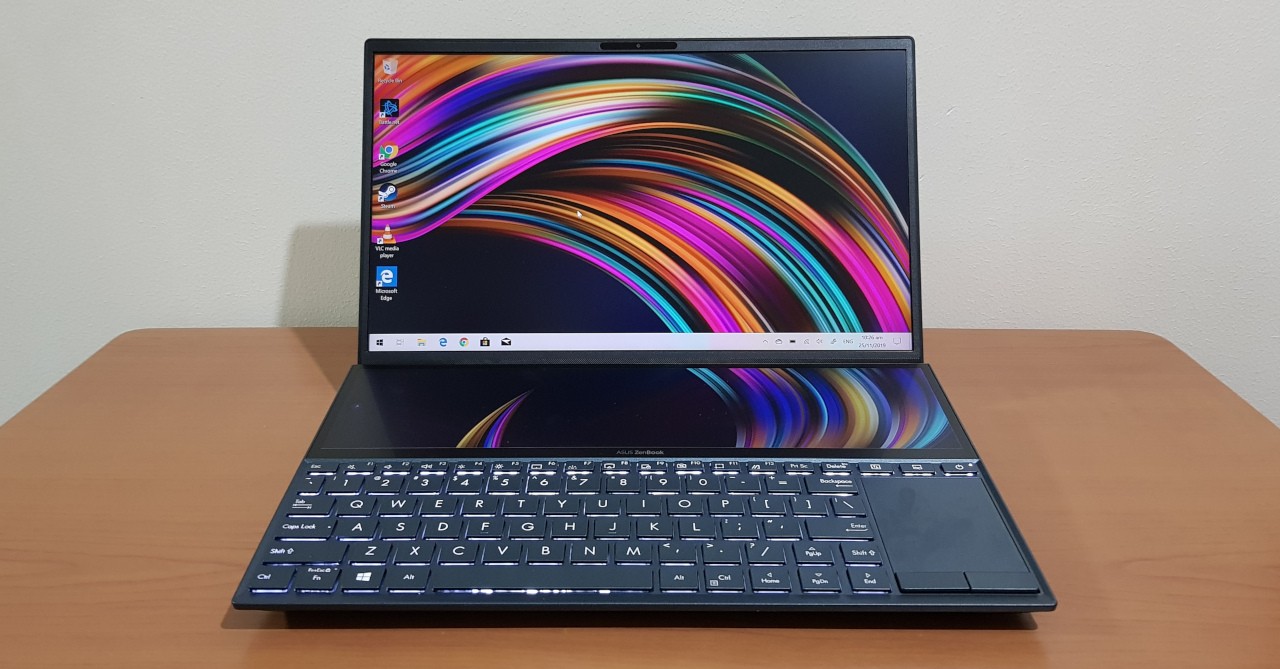 There have been a number of laptops that have incorporated small displays at the bottom such as the MacBook Pro or ASUS’ own ZenBook line, but the ZenBook Duo is the first to offer a true dual-screen laptop experience.

Thanks to the ScreenPad Plus, the ZenBook Duo is a great partner for content creators who are always on-the-go as the secondary touch screen aids immensely in photo/video editing and writing. Even with the nifty ScreenPad, the ZenBook Duo doesn’t sacrifice performance and battery life.

There are some problems with it though such as the sub-optimal keyboard placement, as well as some niggles such as Task Groups not saving in sleep mode or the lack of programs that can take full advantage of the two screens. Plus, not everyone will benefit from a secondary touch display.

In spite of these drawbacks, the ZenBook Duo is still a great laptop overall, and it’s a must for users who want to have a secondary screen without lugging around an external display.

Previous article
New Final Fantasy VII Remake Screenshots released, including images of Chocobos!
Next article
Honor launches the Honor 9X along with the 20 Lite in the PH + confirms release of MagicBook laptop

Thanks to the ScreenPad Plus as well as good performance and battery life, the ZenBook Duo UX481F is a great laptop option for content creators. While there are some issues, they're fairly minor, especially considering that this is a first-gen device. Geek Lifestyle Review: ASUS ZenBook Duo