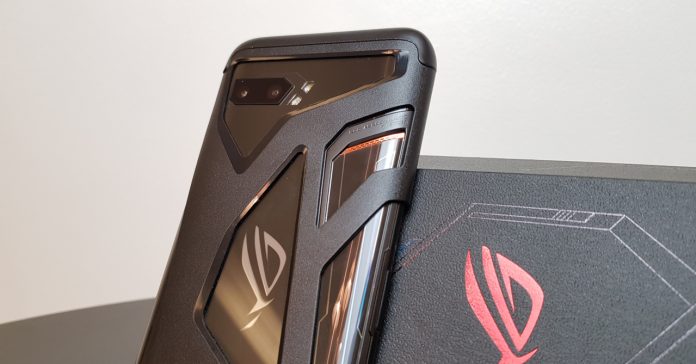 Earlier this month, I got to test out the ROG Phone II during our Rainbow Six Pro League coverage. In my time with it while in Japan, I was impressed by the phone’s photography capabilities and battery life, though I didn’t delve too deep into the phone’s day-to-day usability, as well as its gaming performance. 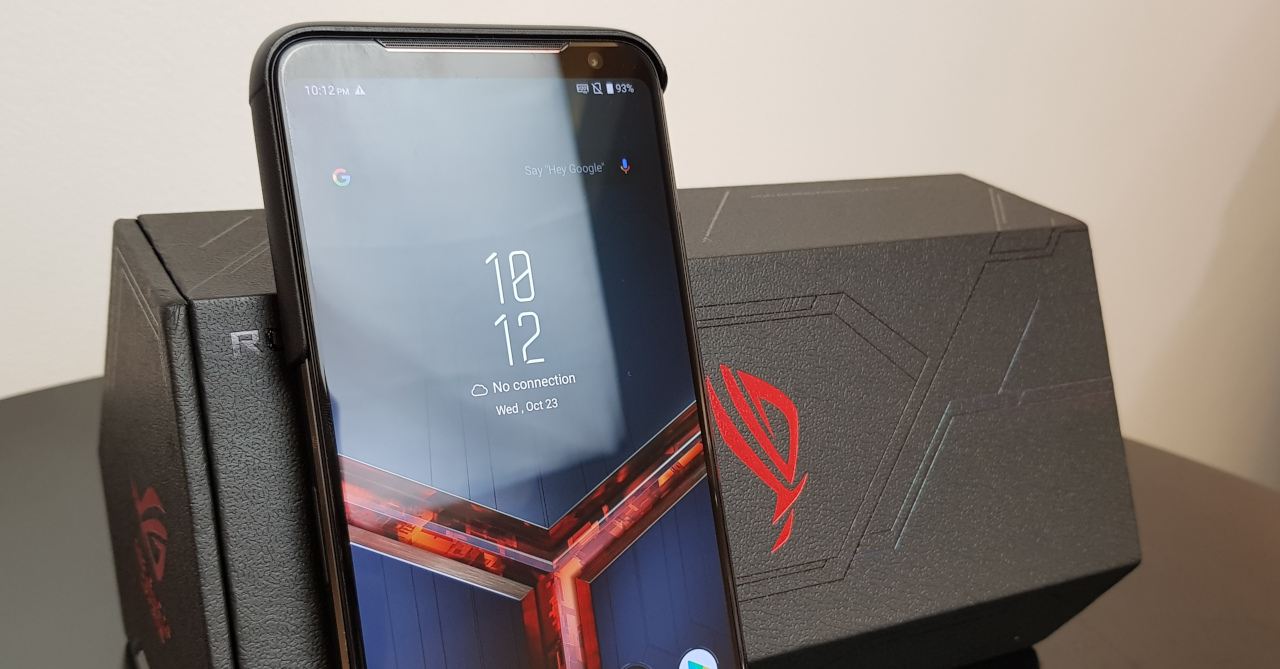 Now that I’ve had more time with the phone, I can finally give my full verdict on the ROG Phone II. So without furhter ado, here’s our full review of ASUS’ new gaming phone! 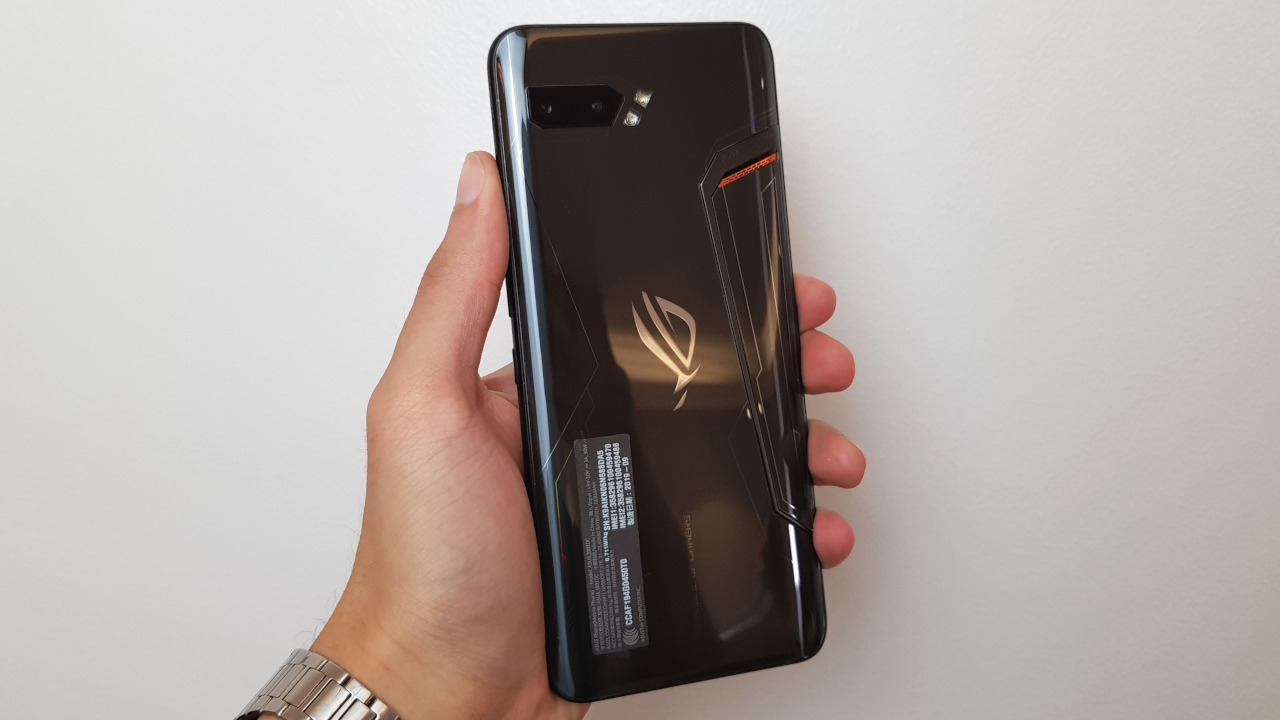 The ROG Phone II shares much of the same looks as its predecessor; that’s not a bad thing though as the ROG Phone II is one helluva looker. If you like the design of ROG’s high-end laptops, then you’ll definitely love this phone as ASUS managed to distill the aggressive “gamer” look of its notebooks into a smartphone.

Aside from being a great-looking phone, the ROG Phone II is also feels nice in-hand, in spite of how heavy it is. Given its weight of 240 grams, the ROG Phone II is one of the heftiest flagships out right now, but it’s surprisingly comfortable to hold whether you us it one or two-handed. It’s quite grippy too thanks to the matte finish on the sides. 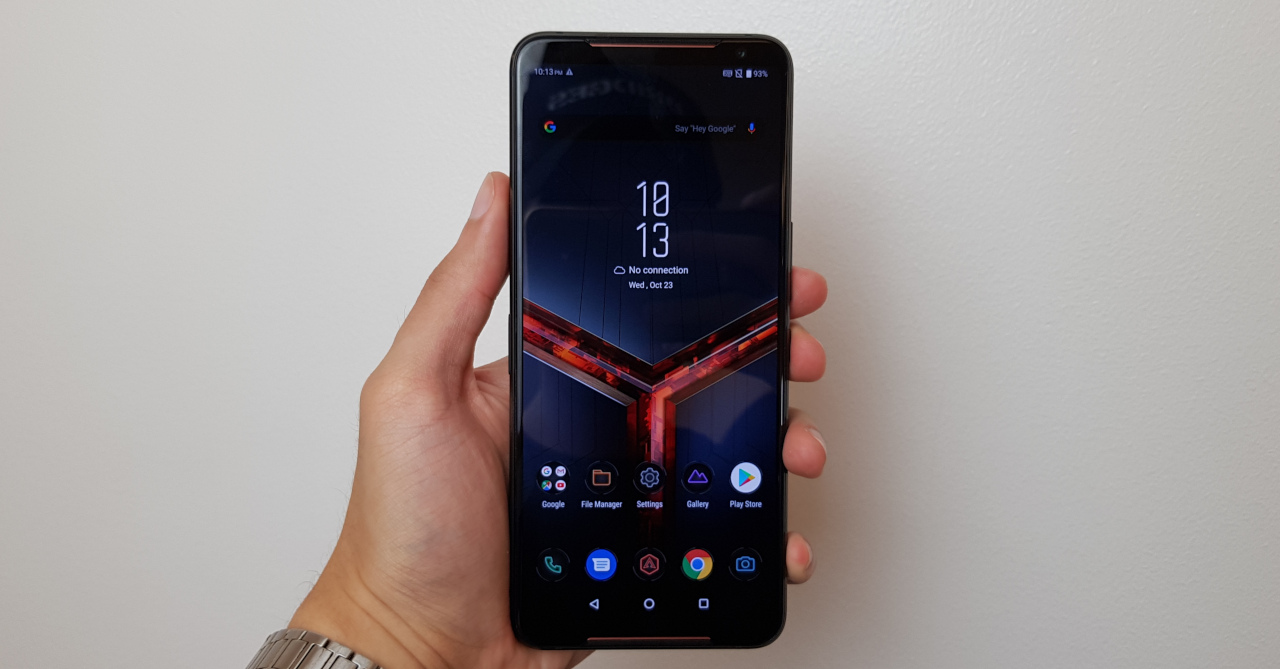 Unlike other flagships though, the ROG Phone II does not have an “all-screen” front. Sure, the display has thin borders at the sides, but the top and bottom bezels are a tad thicker than competing phones. In spite of this, I still think the ROG Phone II is a great looking phone given its symmetrical design (other phones have larger chins which I’m not exactly a fan of). Plus, the phone does make use of the space at the top and bottom well by adding dual front-firing speakers (more on that later). 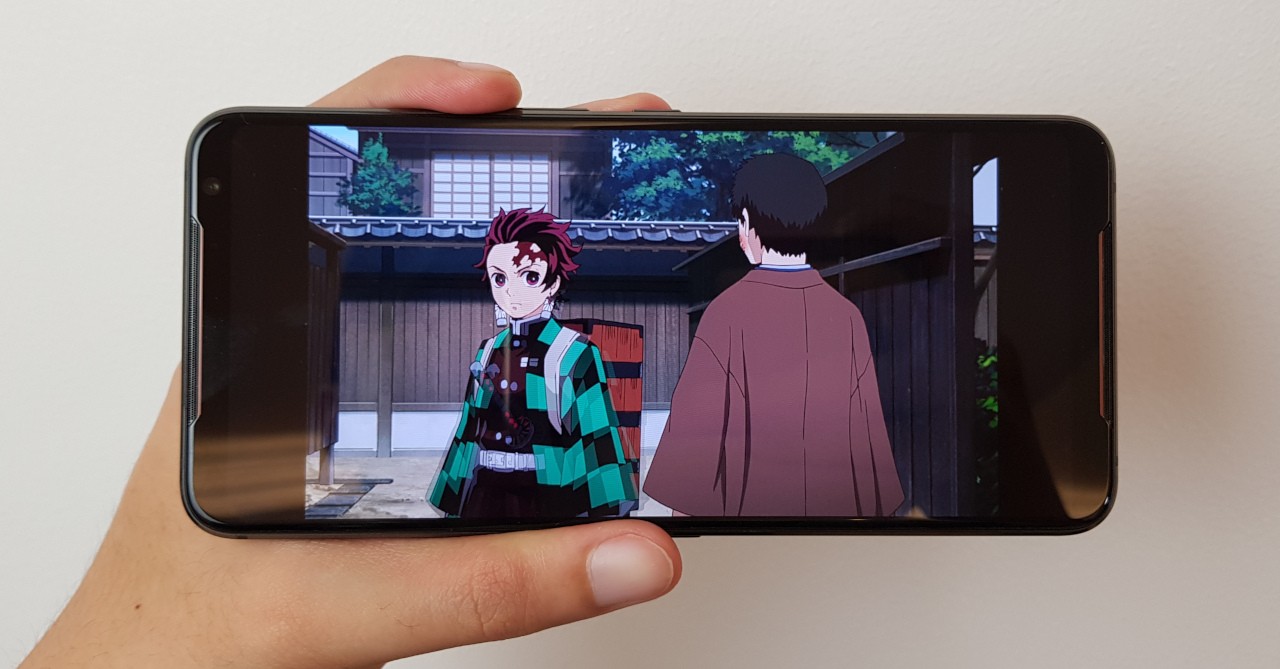 The ROG Phone II’s display is a 6.6-inch 19.5:9 FHD+ AMOLED screen with a 120hz refresh rate. The high refresh rate is great for gaming, though you won’t really need it for binge-watching. Still, watching movies/series on the display is a great experience thanks to the AMOLED panel which produces vibrant colors and deep blacks. The only drawback with the display is that it doesn’t get as bright as I’d like.

What elevates the ROG Phone II for binge-watching though are its front-facing stereo speakers. While there are other flagships with stereo speakers, the ROG Phone II’s onboard speakers are one of the best I’ve heard. Audio quality is superb, and it gets quite loud without much sound distortion. If you don’t have any headphones, your binge-watching experience won’t be compromised.

Gaming is where the ROG Phone II truly shines. Thanks to the phone’s impressive specs which include a Snapdragon 855+ processor, Adreno 640 GPU, and 12GB RAM, the ROG Phone II makes quick work of every game I threw at it. No matter what game I tried, I was able to run them well at max settings with steady framerates.

Now, the phone also comes with a high refresh rate display which is a game-changer; the butter-smooth experience of playing in that high a refresh rate just can’t be beat. The problem is, only a limited number of games support 120Hz. If your favorite game does have 120Hz support, you’re in luck. If not, well you’ll still have a great time on the ROG Phone II at least.

When you play games, remember to turn on X Mode by squeezing the sides. X Mode is the phone’s high-performance mode, boosting game performance even more. For gamers who just want to play with the best experience possible, X Mode is definitely helpful. If you need more customization though, the ROG Phone II also the ROG Armoury Crate. There, users can tweak performance settings for each game ranging from CPU speed to temperature limits. ROG Armoury Crate makes the phone a great choice for power users.

Much like its predecessor, the ROG Phone II also has Air Triggers. Basically, these lets gamers tap the top of the phone to simulate shoulder buttons, making shooter games feel a bit more console-like. The ROG Phone II’s Air Triggers are improved compared to the triggers in the first ROG Phone; personally though, I didn’t use them that much as I still preferred on-screen controls for mobile games.

Finally, the ROG Phone II has an Aeroactive Cooler II bundled inside the box. This attachment helps cool the phone, great for marathon game sessions. I recommend using this attachment whenever you play as not only will it help keep the phone cool, it also has a nifty 3.5mm port that faces downward, meaning you won’t have to place your hands awkwardly to play with headphones.

While gaming is the ROG Phone II’s focus, ASUS promises that the phone is also a capable shooter. For cameras, the phone packs a dual 48MP Sony IMX586 + 13MP ultra-wide camera setup, as well as a 12MP front camera. As I’ve discovered during my coverage in Japan earlier this month, the ROG Phone II can take some pretty good shots. Though after some more time with it, my thoughts changed a bit as its low-light performance isn’t the best, not to mention that it lacks a telephoto sensor (which most other flagship have at this point).

At night though, the ROG Phone II gets beat out by other phones in its price range. Some low-light shots can turn out great, but sometimes they just appear blurry with flat colors. This might be due to the phone lacking optical image stabilization, a feature that most other major flagships have.

Night Mode does help out quite a bit, with photos taken in this mode being sharper and having more detail. As a trade-off though, colors can be a bit unnatural.

The same can be said for the ROG Phone II’s ultra-wide camera. Daytime shots on this lens are great, though there is a dip in quality for low-light shots. Night Mode helps, but it’s still a clear step down in quality over other flagships with wide-angle cameras.

Finally, selfies taken with the phone’s 24MP shooter should be good enough for most users. Not the best in its class, but far from the worst. 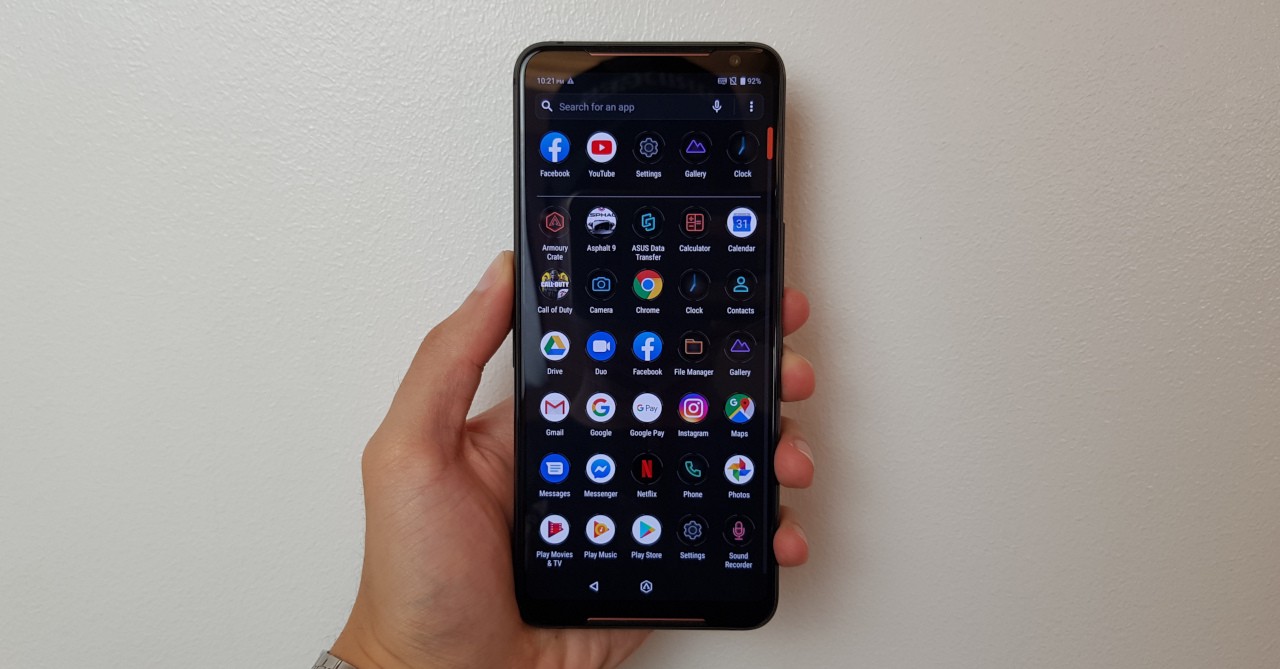 For day-to-day use, the ROG Phone II passed with flying colors. Given the 12GB of RAM and powerful processor, the phone had no problems with general apps such as email, social media, etc. Switching between apps was also smooth, even if lots of apps have been opened.

One surprising thing about the ROG Phone II is how clean the UI is. The ROG Phone II runs on Android 9 Pie with ROGUI which may seem far from stock at first, but once you use it, you’ll find that it’s a bloat-free UI that’s stock-like in all but appearance. If you like a phone without cluttered software, the ROG Phone II will not disappoint. 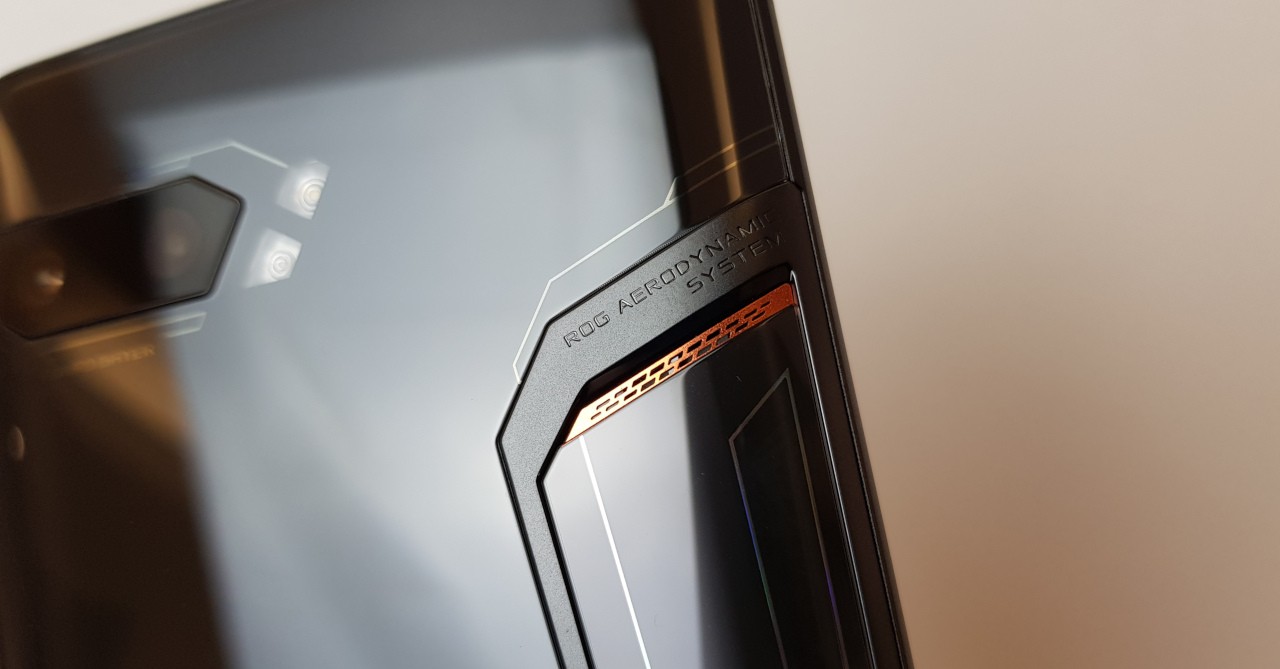 Another impressive thing about the ROG Phone II is its battery life. Thanks to a massive 6000mAh battery, the phone can last for up to two days with proper battery management (i.e. run only on a 60Hz refresh rate). Though if you crank up X Mode, run on 120Hz, and use the Aeroactive Cooler II while gaming, the ROG Phone II will expectedly eat through the battery life. For general use though (with a bit of gaming), expect over a day of use with 120Hz refresh rate on.

If you need a quick charge, the ROG Phone II supports fast charging with its bundled charger. From empty, the ROG Phone II can reach full charge in around 1 hour and 40 minutes, not bad considering how large the battery is. 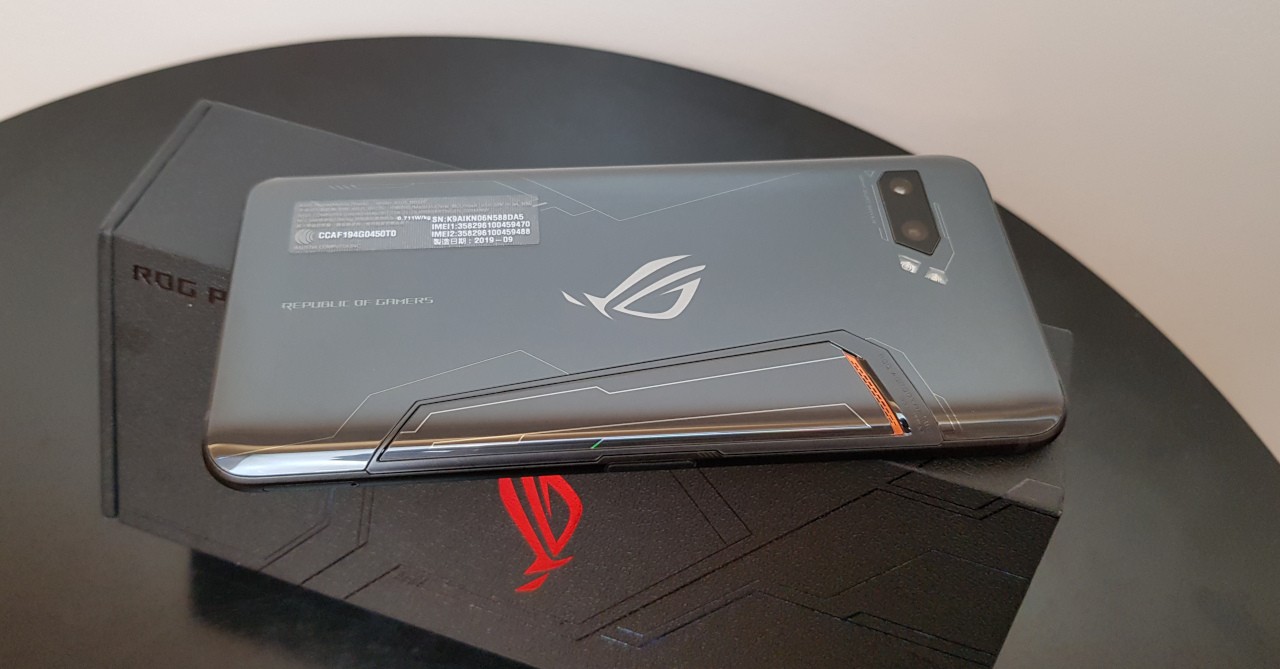 Is gaming performance your top priority for a smartphone? If yes, then the ROG Phone II is for you! Thanks to a powerful processor, great software, and an impressive 120Hz display, the ROG Phone II might just be the ultimate gaming phone. Plus, it also comes with a nifty cooler inside the box.

Aside from being excellent for gaming though, the ROG Phone II offers other features making it worthy of being your next daily driver such as a large battery, a great display, and one of the best onboard speakers of any flagship. As for cameras, the ROG Phone II has good shooters, though they do lose out to other, more camera-focused flagships.

So is the ROG Phone II worth PHP 49,995? Well, if you want the ultimate smartphone for gaming and have the budget for it, this is the phone to get.

Geek Lifestyle Review: ROG Phone IIThe ROG Phone II is a mobile gaming machine, and it'll run every game you can think of with ease. Aside from being great for gaming though, the ROG Phone II also offers other compelling features such as good cameras, a great display, and excellent battery life.