A Smartphone that's perfect for Multi-Tasking! 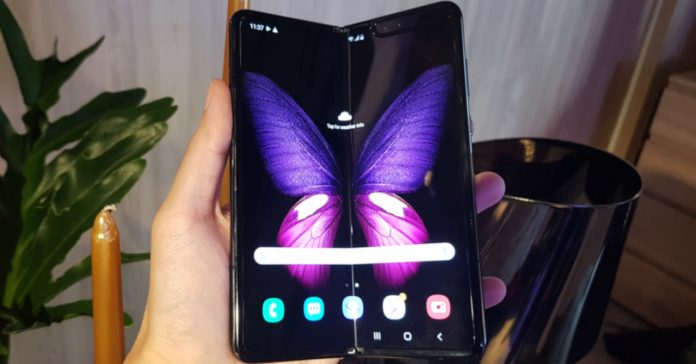 Last Thursday, Globe and Samsung unveiled the pricing and pre-order info of the Galaxy Fold in the Philippines via Globe’s postpaid plans. Aside from the reveal though, Samsung also brought along actual units of the Fold which I got to try out for myself.

While this isn’t the first time I got my hands on a foldable phone, I was still quite excited given that I have yet to try out the Galaxy Fold for myself. It did not disappoint!

As the Galaxy Fold folds on the inside, it has a 4.6” HD+ Super AMOLED Display on the cover, meaning users won’t have to open the phone up to use the phone for messaging and for other apps. Aside from the display, the cover of the Fold also has a 10MP selfie shooter as well as the main 12MP Telephoto + 12MP Wide-angle + 16MP Ultra Wide triple camera setup (the same cameras as the S10 and Note10 line). These cameras can be used to take shots even without opening up the phone.

When you do open up the Fold, you’ll be greeted with the foldable 7.3-inch QXGA+ Dynamic AMOLED Display with a squarer 4.2:3 aspect ratio. As with Samsung’s flagships, the Fold’s display is gorgeous, with vibrant colors and deep blacks.

The screen’s quality isn’t the only thing impressive about it though, the fact that it’s such a big display is great for media consumption, gaming, and multitasking. 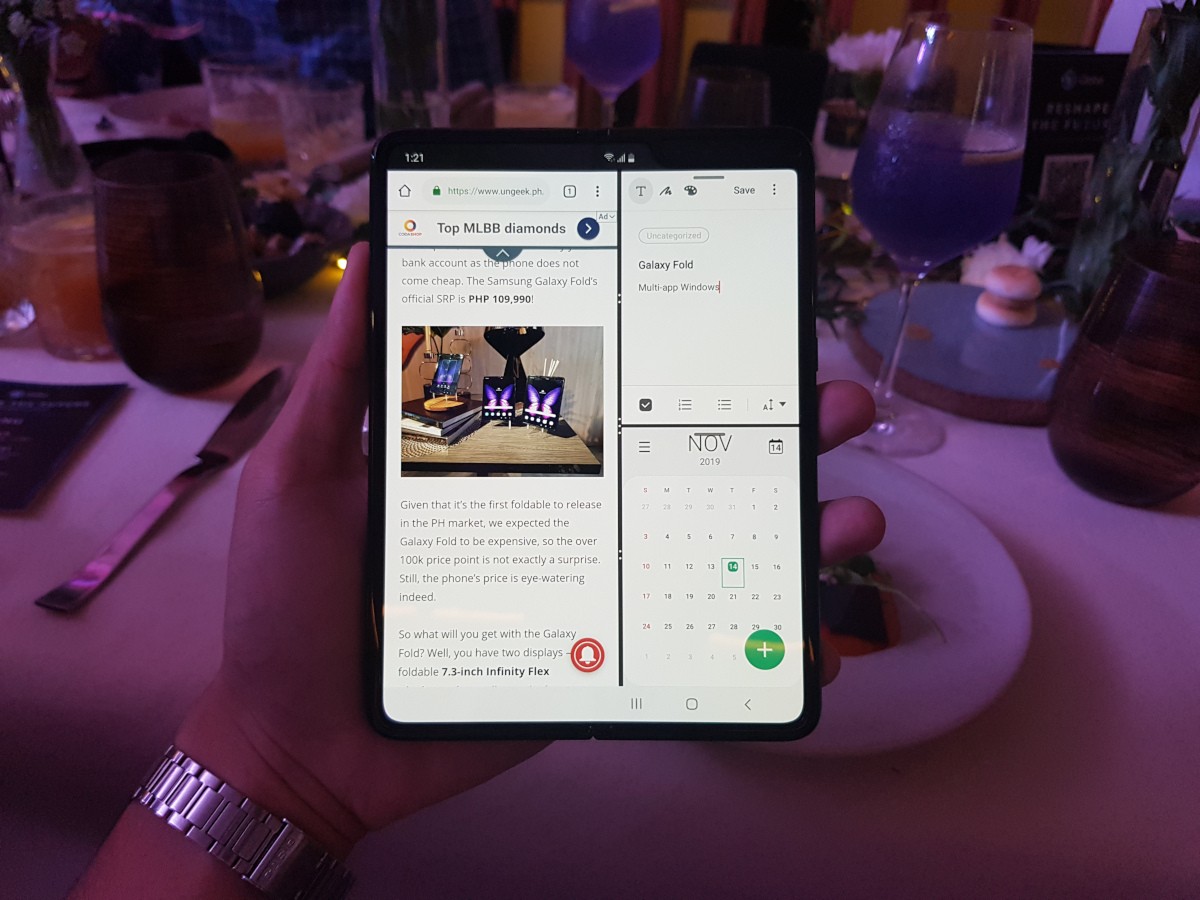 One of the highlight features of the Galaxy Fold is the Multi Window function which lets users open up to three apps at the same time. With this feature, Fold users will be able to multitask with ease; say for instance you receive a work email with some documents attached, with the Fold, you can open the attachments on a different window while still being able to view your email.

Sure, most Android phones now support split-screen apps, but multitasking on standard phone displays (with tall aspect ratios) isn’t often effective given how cramped the screen will look. With the Fold’s large display though, opening even three apps at one time is no problem.

Performance-wise, I did not run into any slowdowns during my quick hands-on with the phone, even when I tried running three apps at the same time. This is due to the fact that the Fold has some powerful internals, specifically a Snapdragon 855 processor, as well as 12GB of RAM which is further complemented by 512 GB of storage and a 4380mAh battery.

Another cool feature of the Fold is that apps open on the secondary screen will smartly carry over to the main display when you open it up. For example, if you’re taking shots using the secondary screen, you can opt to open the phone to use the main screen, and you won’t have to restart the camera app.

Speaking of opening the phone, the Galaxy Fold is quite easy to open and close, all while still feeling fairly solid. The Fold is also surprisingly light, as well as thin enough to easily fit in pockets even when folded. Still, it remains to be seen if how long the Galaxy Fold can last with daily use.

So what about the middle of the screen where the Fold, well, folds? On some angles, you can see the seam where the screen folds. For the most part though, most users probably won’t notice the seam that much in day-to-day use. 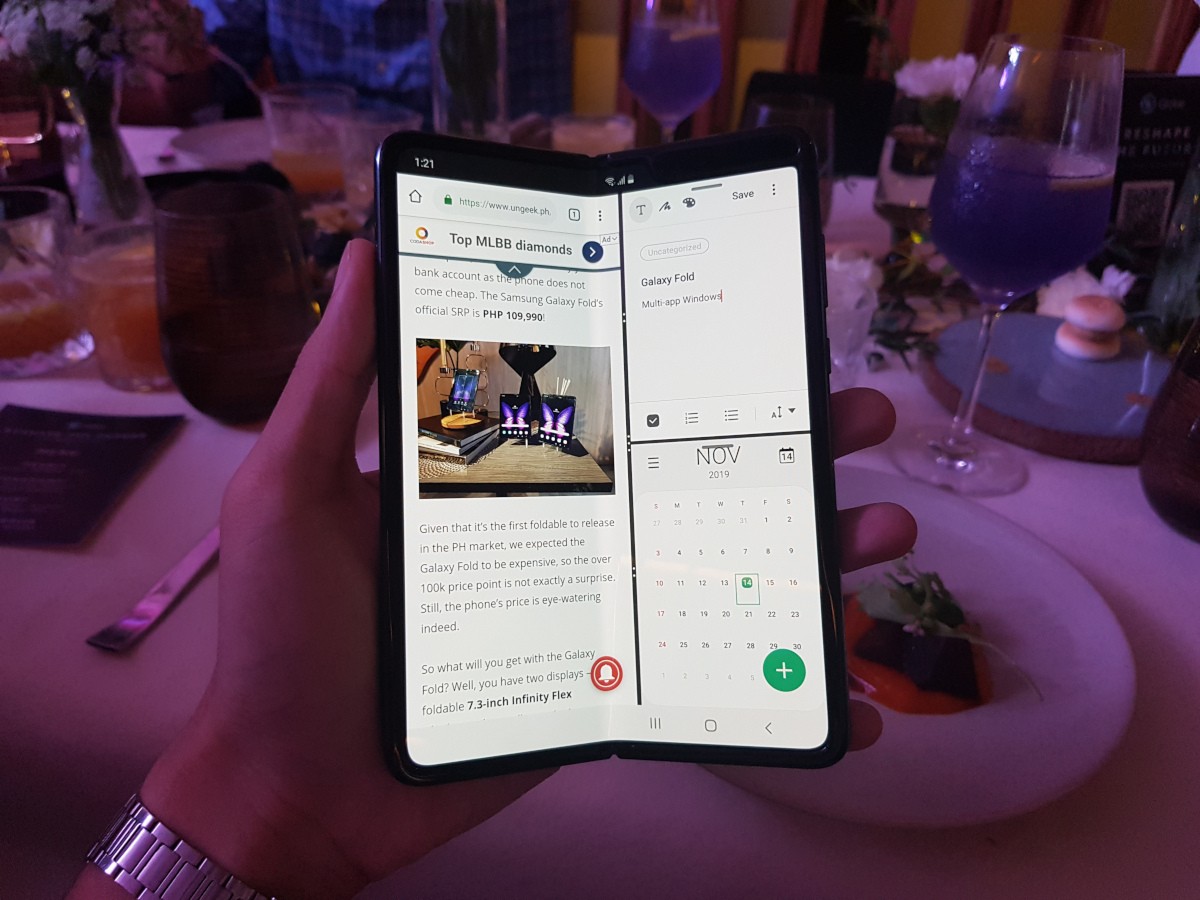 Overall, I was quite impressed with the Galaxy Fold. Thanks to its large foldable screen, the Fold is definitely a great match for multitasking. The phone’s innovative display is also complemented by flagship level specs, as well as a total of six cameras.

Given all of its features, the Galaxy Fold does not come cheap. Samsung’s first foldable is priced at PHP 109,990 in the Philippines. Is it worth the price? Well we can’t say for sure right now, but if you do want to get your hands on one, the Galaxy Fold will be available for pre-order via Globe’s postpaid plans starting on November 18. Pre-order and availability details will be announced at that date.