The first major add-on to the game releases on December 20! 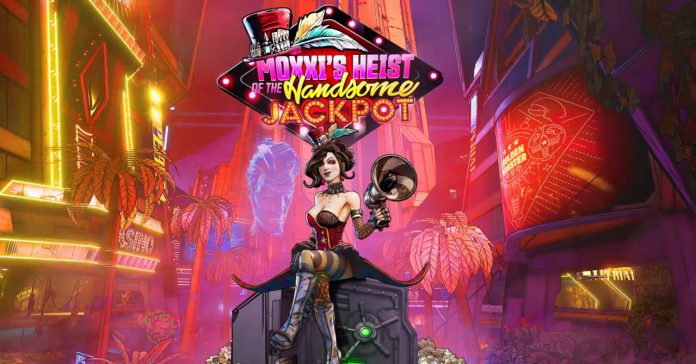 2K recently unveiled Moxxi’s Heist of the Handsome Jackpot, the first of four major add-ons to Borderlands 3. This add-on will releases on December 20 in Asia, and it will bring lots of new content.

In case you’re unsure if you should get the new update, well you better watch this! 2K just uploaded the first 13 minutes of ‘Moxxi’s Heist’!

Moxxi’s Heist is described by 2K as:

“Moxxi’s recruiting you to seize control of a derelict space station built by the infamous Handsome Jack back when he was still president of the Hyperion corporation. The Handsome Jackpot is quite possibly the gaudiest gambling spot in the galaxy, with neon signs, slot machines, and gold statues all over the place. It’s also crawling with multiple models of deadly Hyperion Loader Bots, as well as lunatic looters who’ve been trapped on board ever since Jack’s death.”

Aside from the new campaign, the add-on will also feature lots of side missions, crew challenges, new enemies, customization items, and legendary weapons/gear. To enjoy the new content though, you better make sure your character is leveled up enough as ‘Moxxi’s Heist’ is tuned for characters that are level 13 and above.

Moxxi’s Heist of the Handsome Jackpot releases on December 20, 2019, and it will be available for users with a Season Pass, as well as for players with a Super Deluxe Edition of the game. It will also be available as a stand-alone DLC.

- Advertisement -
Previous articleLazada’s biggest Year-Ender Sale is also its Most Charitable!
Next articleThe latest One Piece x Nissin commercial will have you crying over noodles