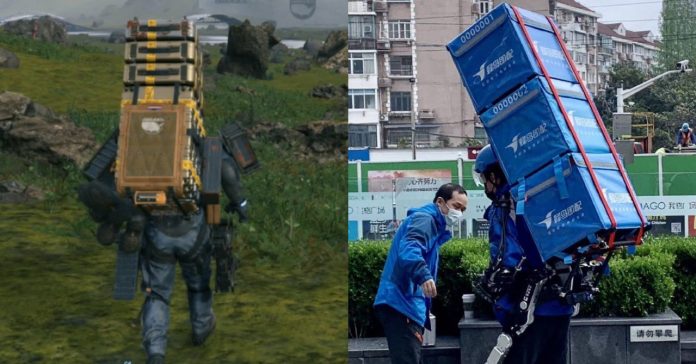 Imagine a world where people have isolated themselves in their homes in fear of an unseen killer, all while becoming increasingly reliant on brave deliverymen to get their necessary supplies. No, I’m not referring to our pandemic-crippled world today, I’m talking about Death Stranding.

The COVID-19 pandemic isn’t the only thing that’s eerily similar to Hideo Kojima’s game though; Chinese delivery company Ele.me recently tested out an exoskeleton for is couriers, and it looks straight out of Death Stranding!

Straight out of a video game: China’s ubiquitous food-delivery app https://t.co/O6kOT9RrJG caught the Chinese internet’s attention this week after testing a powered exoskeleton for its couriers. The exoskeleton endows the wearer with the strength to carry up to 50 kg with ease. pic.twitter.com/4elmxRhLDU

According to Sixth Tone, the delivery exoskeleton will enable couriers to carry up to 50kg of items on their back. The visual of an Ele.me courier with an exoskeleton and 50kg of boxes stacked on his back is definitely reminiscent of Sam Porter Bridges (Death Stranding main protagonist) in action.

While the test seems to be a success, don’t expect your local courier to bust out powered exoskeletons anytime soon. These units are still in the experimental phase and likely won’t see real-world usage anytime soon. If these do become used widely in the future, let’s hope it’s not because of some post-apocalyptic event.

Haven’t played Death Stranding yet? The game is available now on the PS4, with a PC release via Steam and the Epic Games Store happening in July:

Death Stranding PC release date has been moved to July