Unboxing and Quick Review of the FF7 Remake 1st Class Edition | Is it worth getting?

In a class of its own. 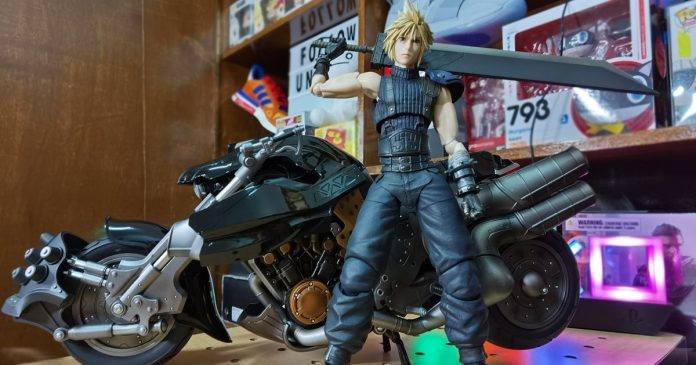 Ah the Play Arts Kai series, I’ve always seen this line of figures as the the middle ground in quality between Goodsmile’s 5-6 inch Figma’s, Bandai’s SHFiguarts, and the incredibly detailed (and equally expensive) Hot Toys line. While all of them mainly feature a wide spectrum of characters from different pop-culture franchises, each have their own ace-in-the-holes not found in other competing brands. If there’s one thing they are all good at though, its the fact that they are do a great job of targeting my wallet. 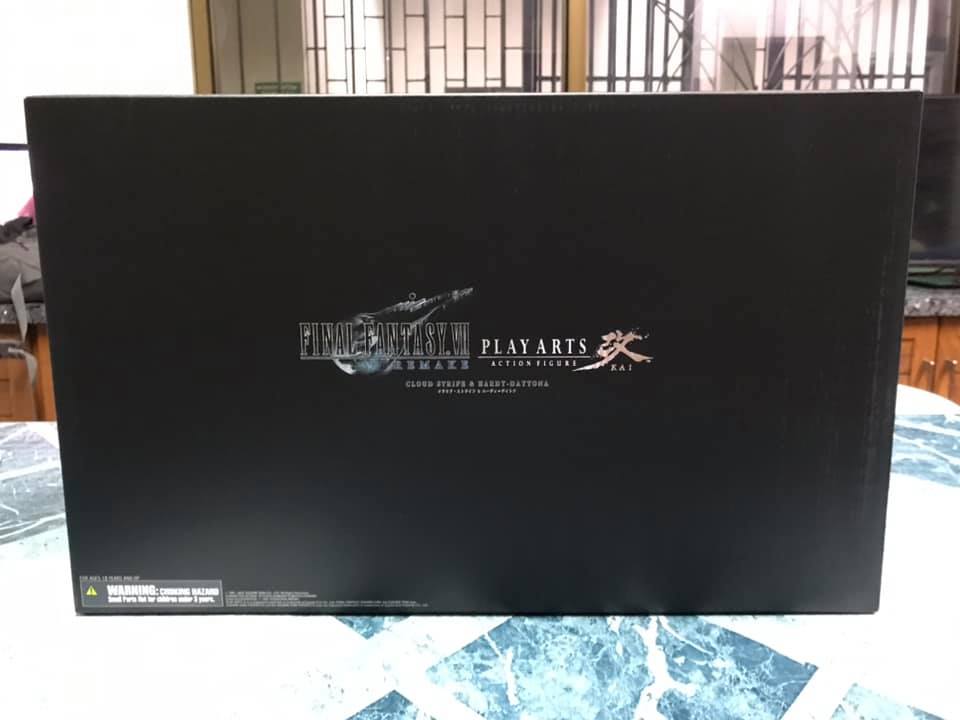 Continuing on an impressive list mainly gravitating towards popular video game characters, Square Enix recently released, at least here in the Philippines, The Final Fantasy VII Remake – 1st Class Edition. Fans who pre-ordered their physical copies have been eagerly anticipating the game for at least 3 weeks now. I myself could not contain my excitement during the game’s official release last April 10, that I purchased a digital copy of the game (yes I am weak). Those who are toughing it out would be happy to know that copies are now rolling out from your friendly local game store, as I see a lot of my friends getting their hands on the physical and deluxe editions.

But this is not about the game, which we reviewed last month. This is about the Collector’s “1st-Class Edition” that will be focusing on the figures – Cloud Strife and his ride, the Hardy Daytona. As well as discuss some points of comparison between this edition and other similar PAK figures and vehicles that came before it. So let’s get to it. 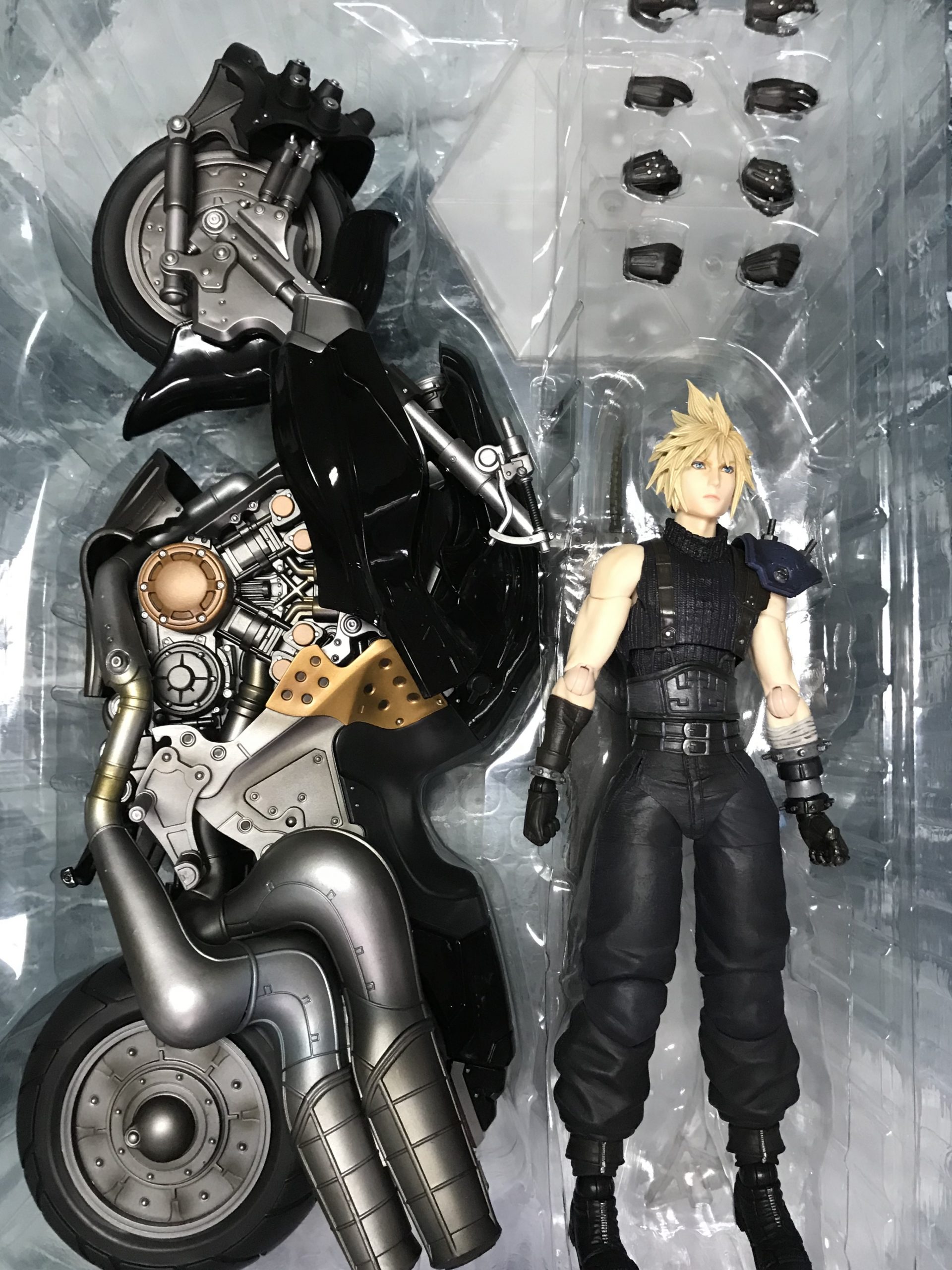 Right off the bat after opening the box we are immediately presented with the two main highlights of the package. You know that wonderful plastic smell when you open something new? Its here and it lingered in the room for quite a bit… and I’m not complaining. For a brief moment it felt like Christmas. 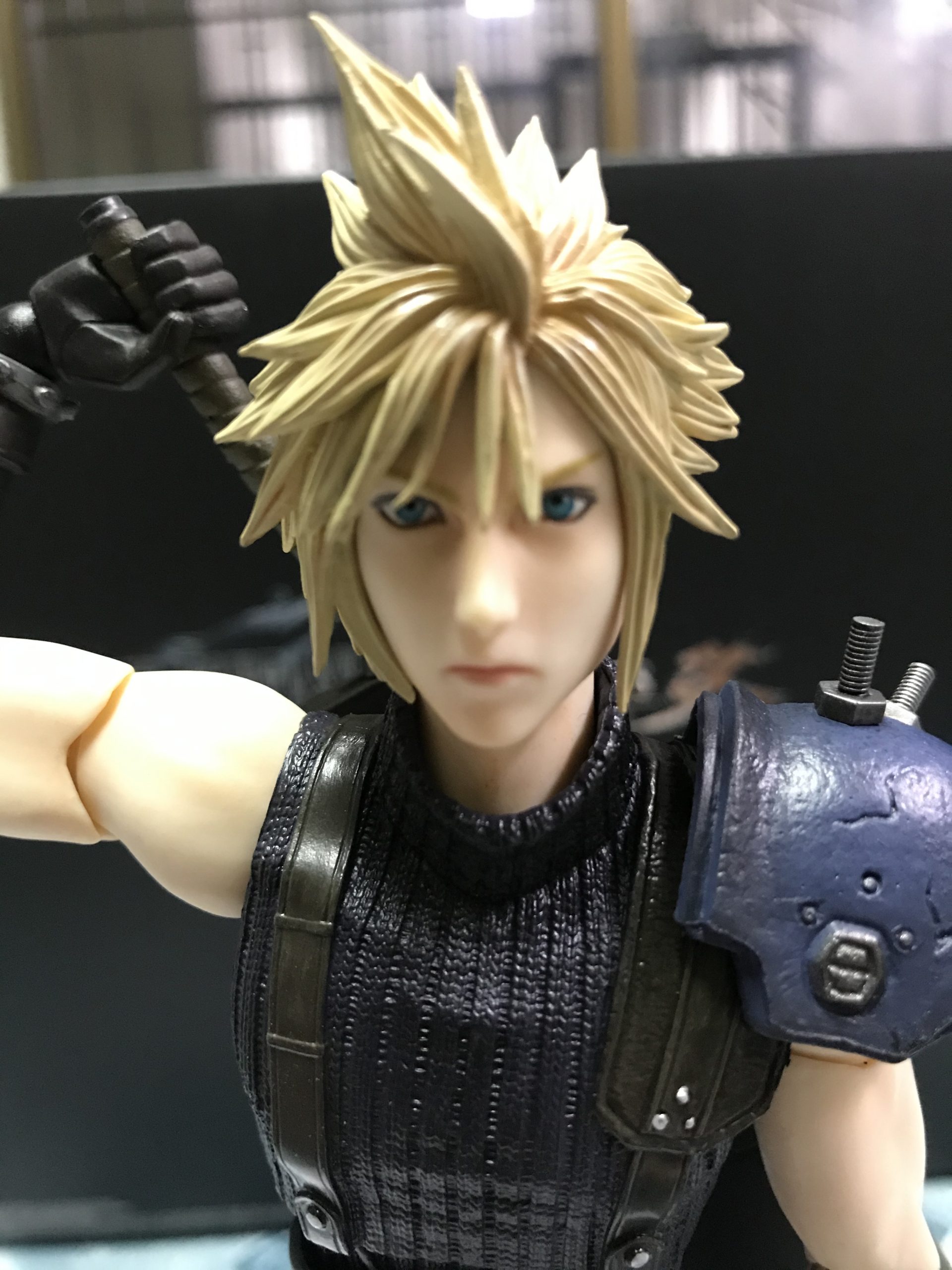 Let’s talk about Cloud Strife’s details first. This is pretty much the same sculpt and paint job that they did with the original “Remake” Cloud back in 2017, but with a slight difference on the head.

Though I don’t own the first PAK version of Remake’s Cloud, I have been hearing some reports saying that the 2017 version’s colors – particularly in the head sculpt, show a more darker color tone. Having watched SpartanUruk’s video, I can say that its really the case and it looks like the older version added another layer of wash for the hair and face. I personally didn’t mind the lighter change with the new one but for some, but know that you’ll be getting something a bit different when getting the 1st-Class Edition. 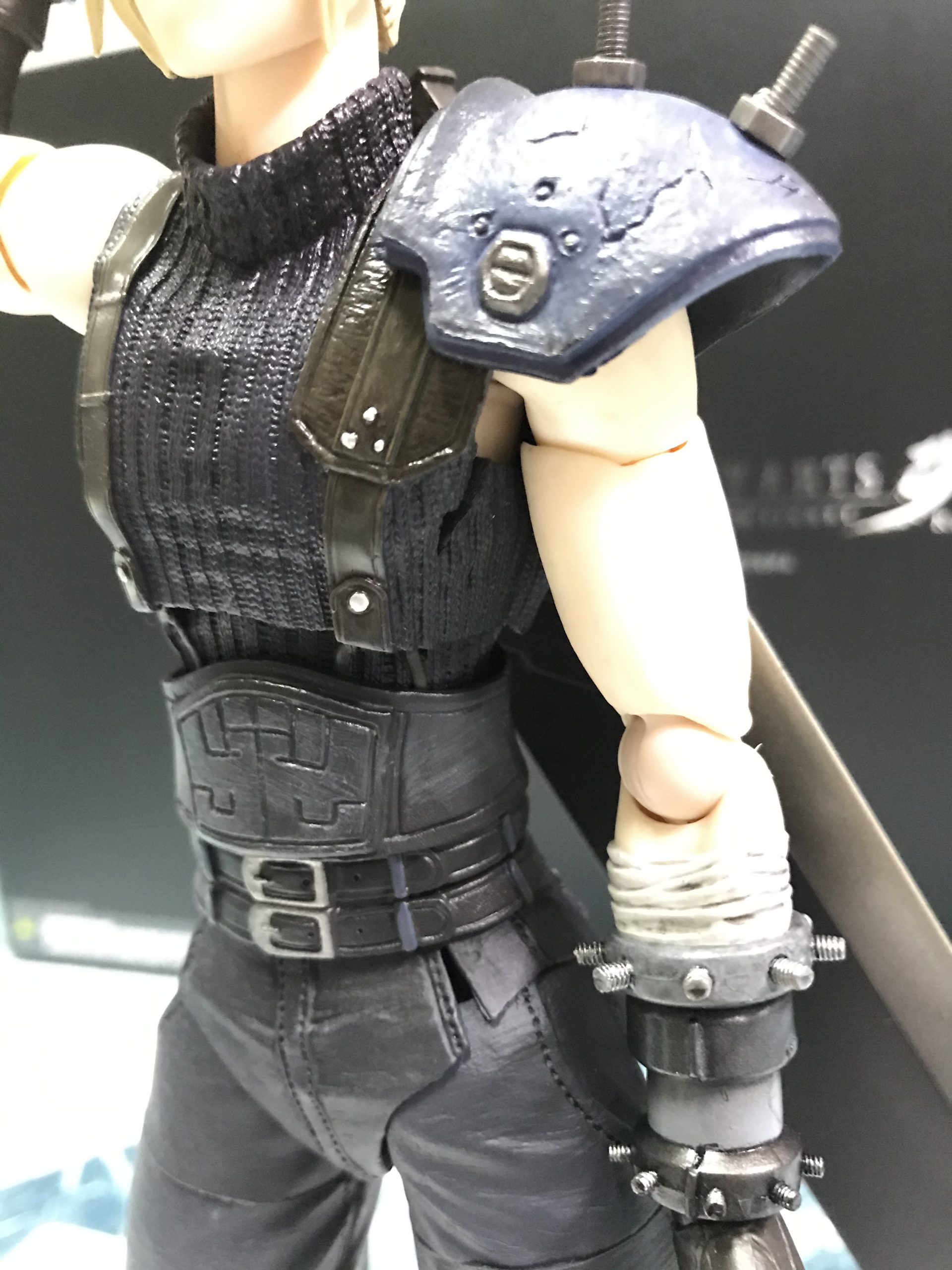 Going back to the figure particularly on the torso area, I absolutely loved the little details they put into it as you can see in the image above. From the fabric of Cloud’s turtleneck top to the shoulder pad (complete with nuts and bolts), every little bit of quality is here as you would expect from a PlayArts Kai figure, with one small nitpick… 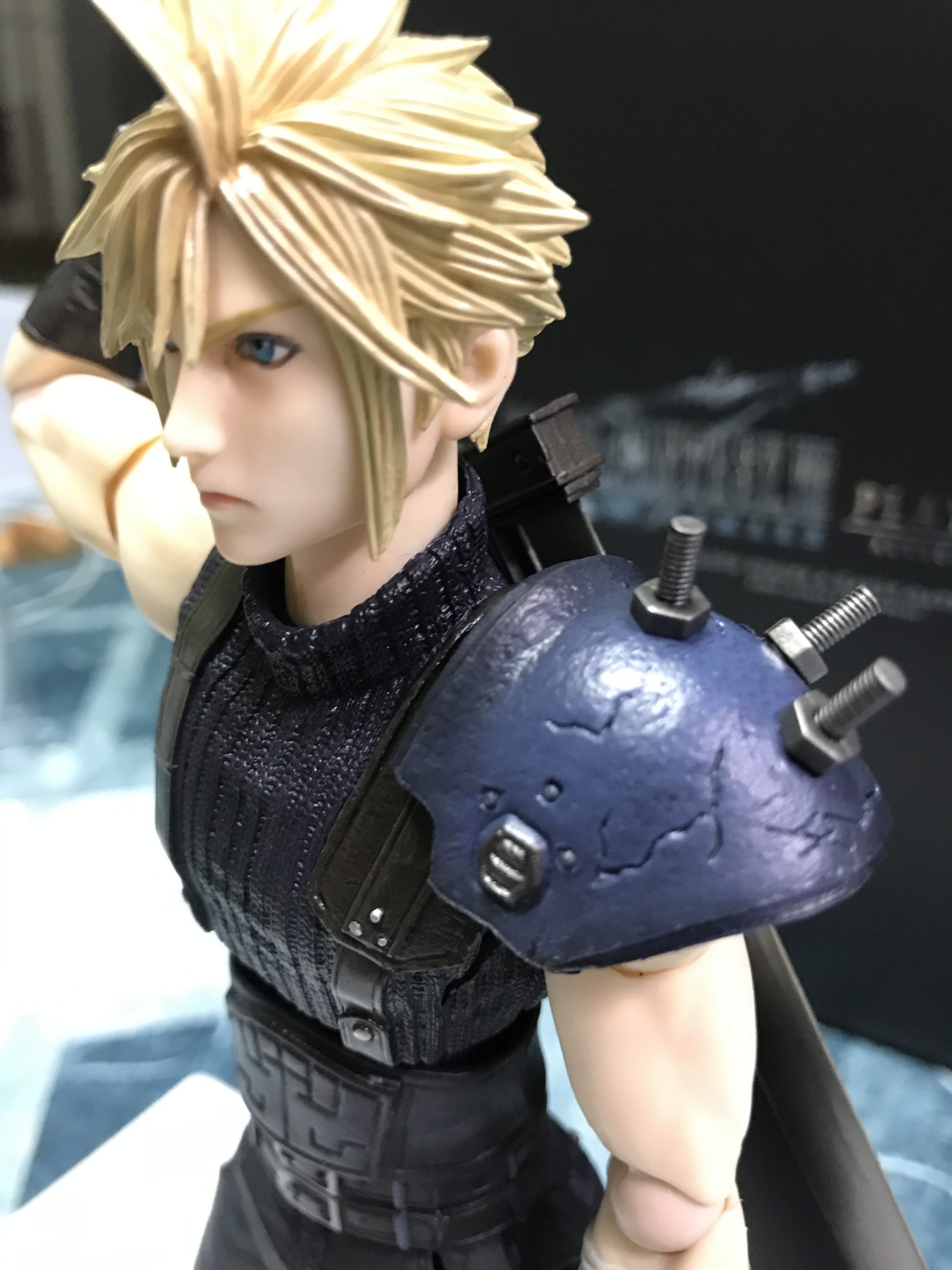 Though I would want to point out something that they should have fixed the first time around, and that is color of the ball joints — which as you can see shows a different color of skin tone compared with the rest of the body. I understand that this might be because of the different materials they used, particularly on the joint itself, but I hope that this is something they improve down the line. 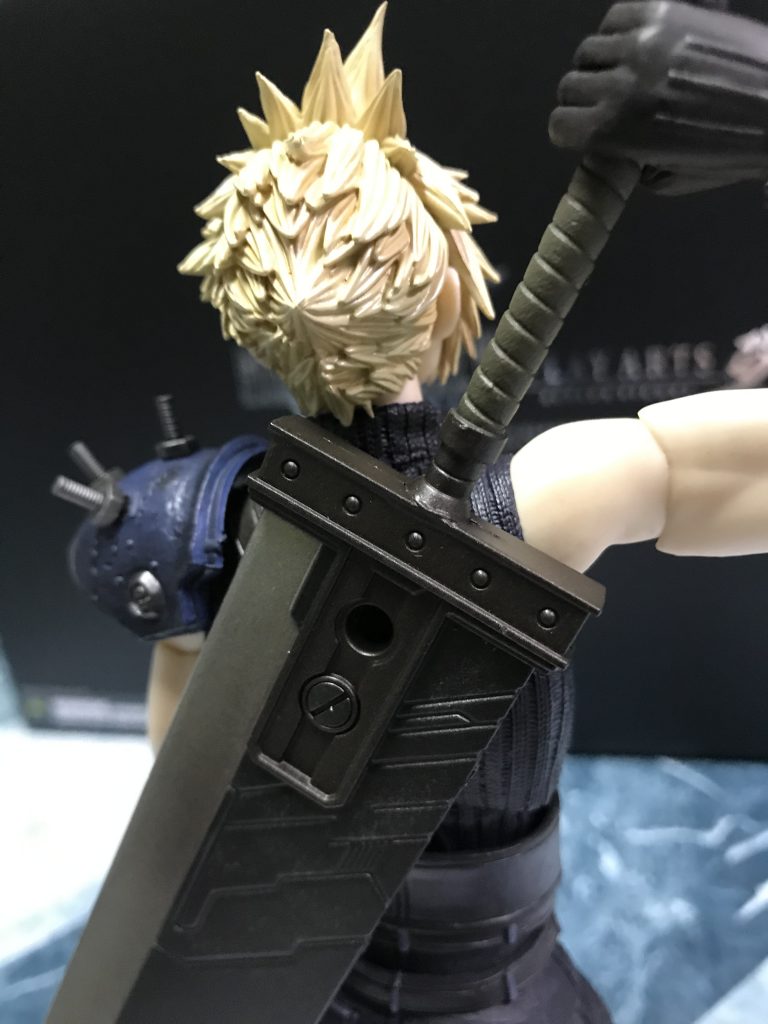 On a more positive note, I really like that you can actually rest Cloud’s Buster Sword at his back using a small peg which inserts on one of the “Materia” slots. It might be asking for much, but it would have been nice to get others sword accessories like the nail-bat (that for some reason, is my favorite weapon in the game). Though I understand that it might push the cost quite a bit but hey, they did it for the PAK Advent Children Cloud and Fenrir, which came with the Fusion Sword (by default is a combination of a lot of swords).

Here are some shots of the other accessories like the interchangeable hands, Buster Sword and display stand:

Now we move on with something that everyone might agree to be the crowning figure of the collection which is the Hardy Daytona.

Initial impressions upon laying-out the vehicle can be summed up into a few words – big and sexy. Here’s a look at the motorcycle from both sides.

And here’s one from the front and back. The rear wheels can rotate at a certain degree which can provide some great poses (which you will see in at the end of the article). 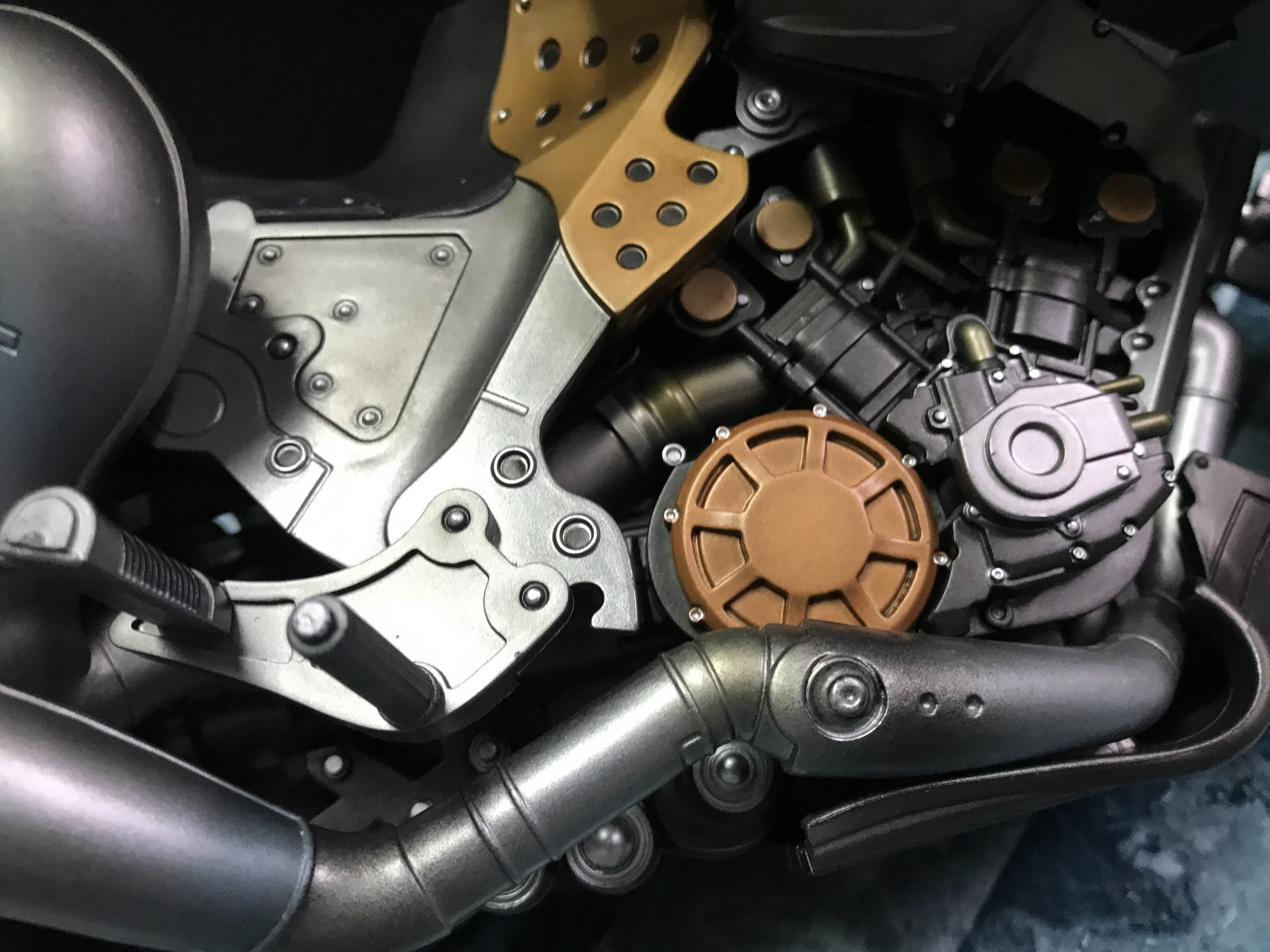 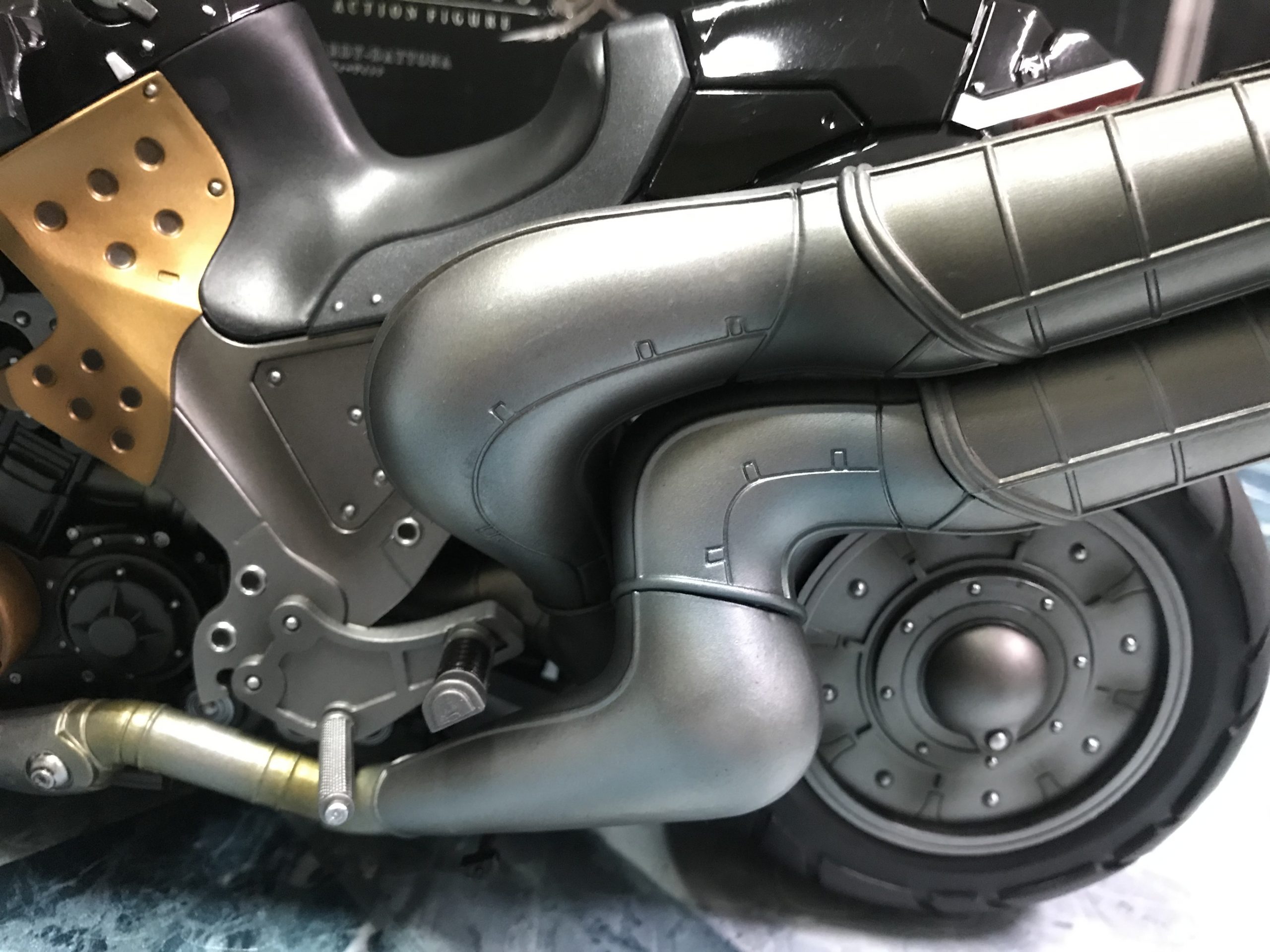 As you can see, every little bit of detail it expertly presented. From the little screws to the transitioning colors on the tubes and pistons all the way to the engine… a lot of love was really given to the Hardy Daytona. 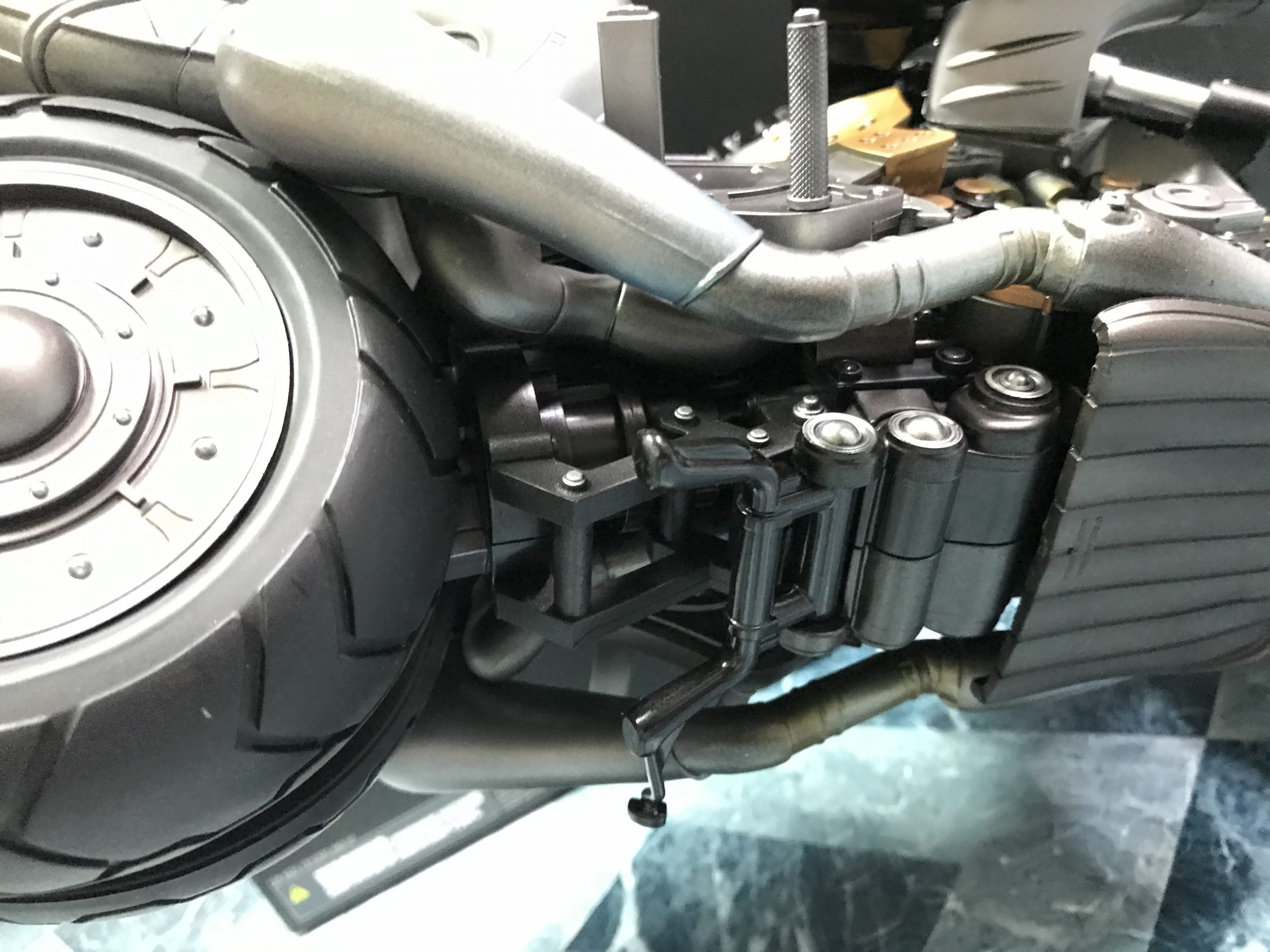 Checking at the bottom you can see a kick-stand for displaying purposes. 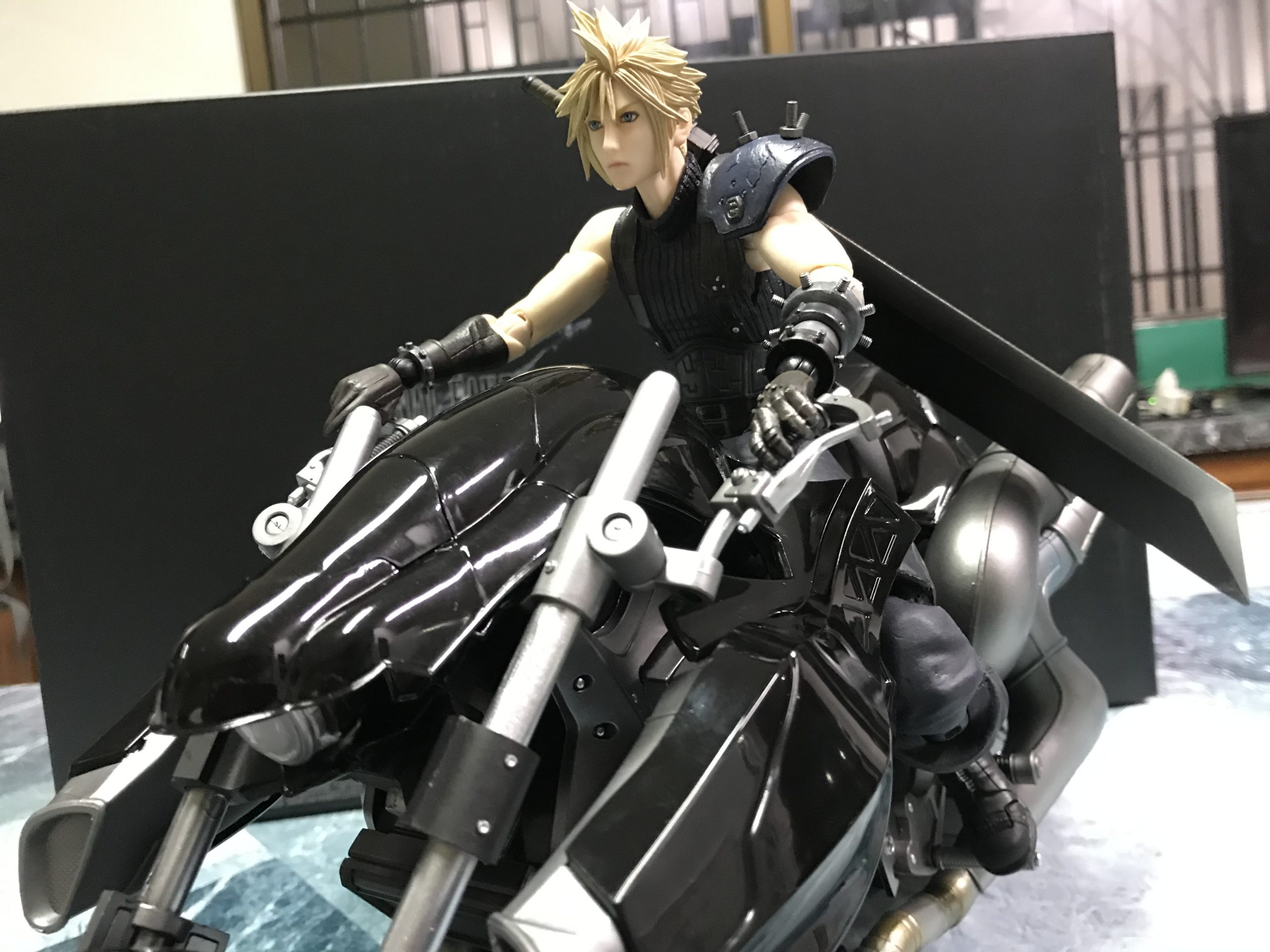 Initially I found it hard for Cloud’s hand to reach the handles, but after carefully trying out some specific twist and turns on the figure (also by reading the manual). I finally got Cloud to mount this beast. I have to say, it is as every bit as cool as I would have hoped it to be. Perhaps the only missing function that everyone wants was an electronic feature on the headlights and backlights, something that I would think would drive the price to some hurtful levels, but as far as the color scheme and overall presentation shows, this is really an impressive piece. They went for the more hardened look vs the sleek build of the Fenrir that came before this and if I would have to only choose one, hands-down it is definitely this one. 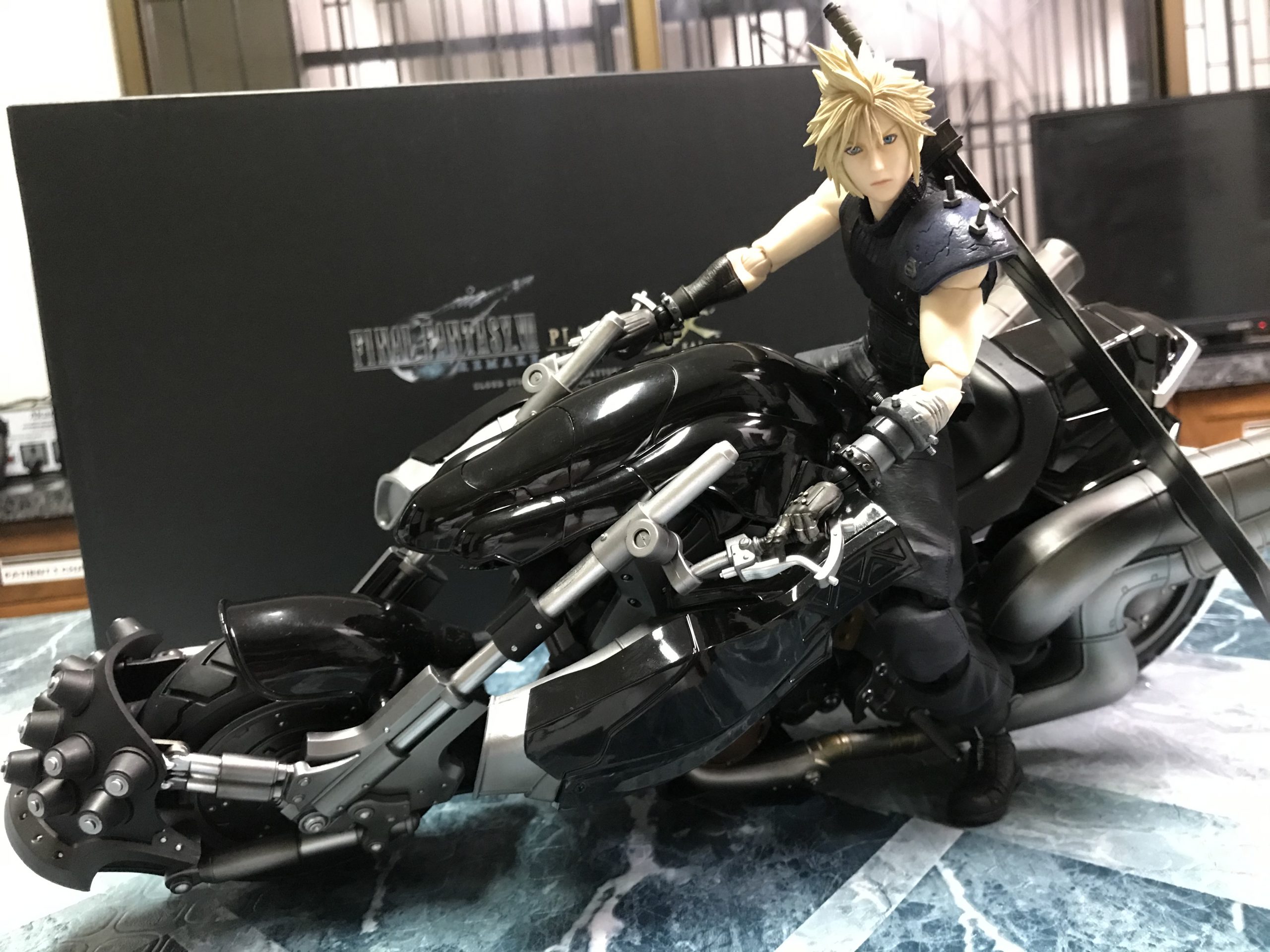 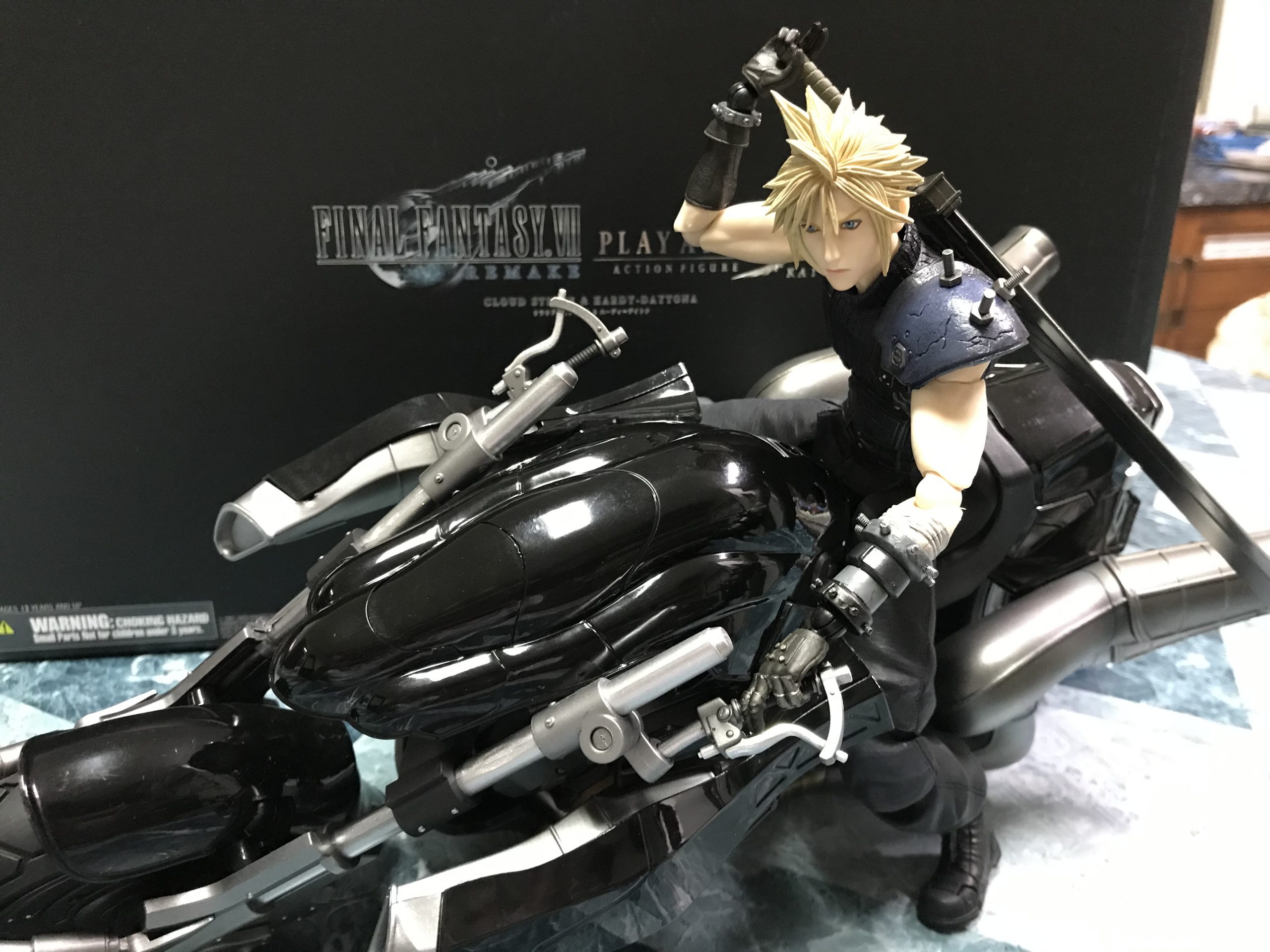 Like I mentioned earlier, the rear wheels can be adjusted in a way that can provide some amazing poses! 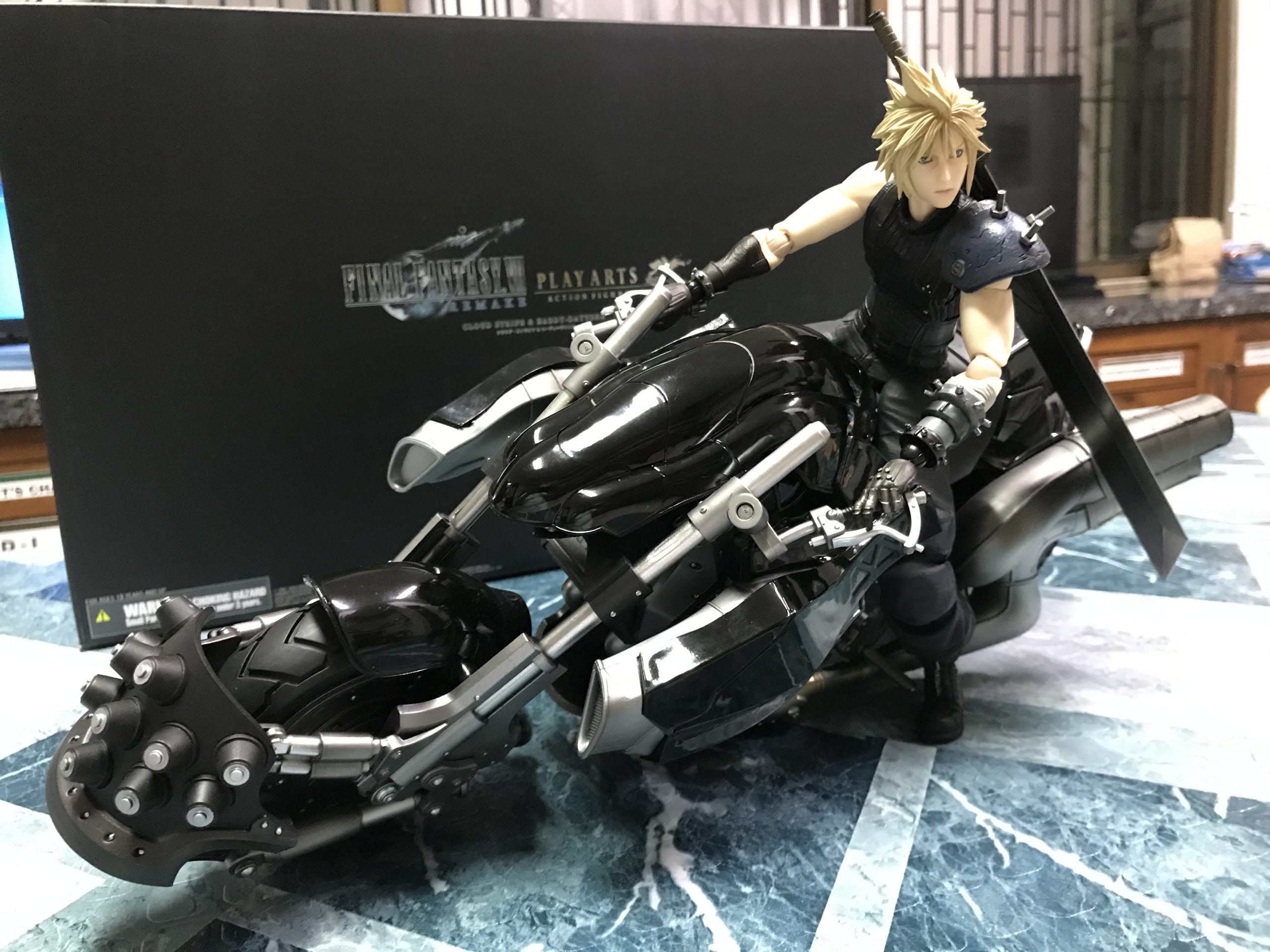 So what’s my final opinion on this bad boy? First off lets talk about the price – for PHP 18,999 or roughly USD 376 , this is about the same price as you can get for the Play Arts Kai Advent Children Cloud and Fenrir. Yes its missing the additional swords and light-up feature, but did I mention that the 1st-Class Edition comes with a deluxe, physical copy of the game? Something that I did not discuss on but the bundle actually comes with a lot packed in the box: 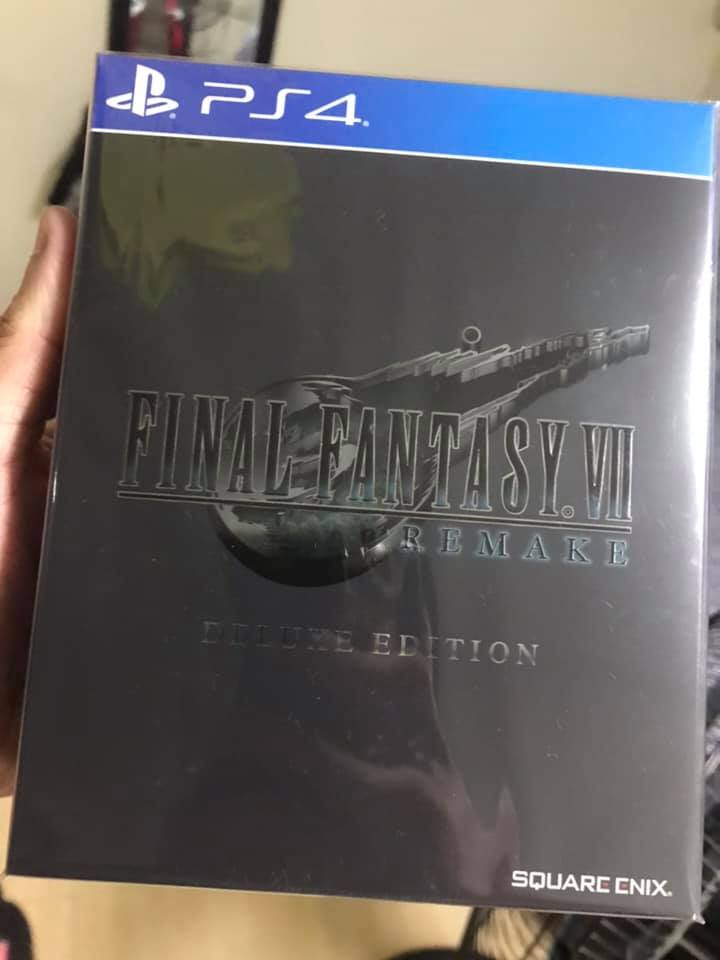 So ignoring the hefty price tag, based on value alone this collection definitely packs a lot of bang for its biker buck. Not only do we have a really great title that’s worthy of a 2020 Game of the Year, we also get an iconic piece worthy of a display on anyone’s man cave. Personally I am really glad that I did not pass on this when I had the chance. Before I was initially not a fan of PAK particularly for the size choice (thank you, Bring Arts) but after getting up-close and personal with this, I have to say I am now a fan.