SuperEpic: The Entertainment War Review | Embark on a Retro Revolution

It's time to make some bacon 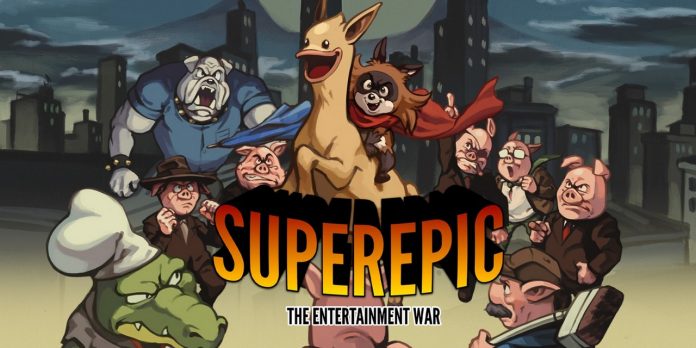 Have you ever wondered what would happen if we all lived in the darkest timeline where we’re unknowingly ruled by an evil corporation through our mobile devices? In this world, by just simply serving us some cheap, low-effort games, the megacorporation is given power as they spy our every move, and siphon our hard-earned money through microtransactions. Sounds like a grim (yet interesting) world right? Well that’s exactly what this game on the Switch is set in.

Developed by Undercoders, SuperEpic: The Entertainment War sees the the world submerged in such a fate as RegnantCorp., a game company brainwashes the masses with their mobile games, pretty much rules the world, sucking people’s cash through microtransactions while classic games are blacklisted and considered to be a crime.

But all hope is not lost as our heroes TanTan the Raccoon (that reminds me of the raccoon from South Park) and his trusty duck faced llama steed Ola embark on their journey to end the evil corporation and free the people in a retro, Metroidvania-style adventure.

Please Sir, May I have some more Pixels? 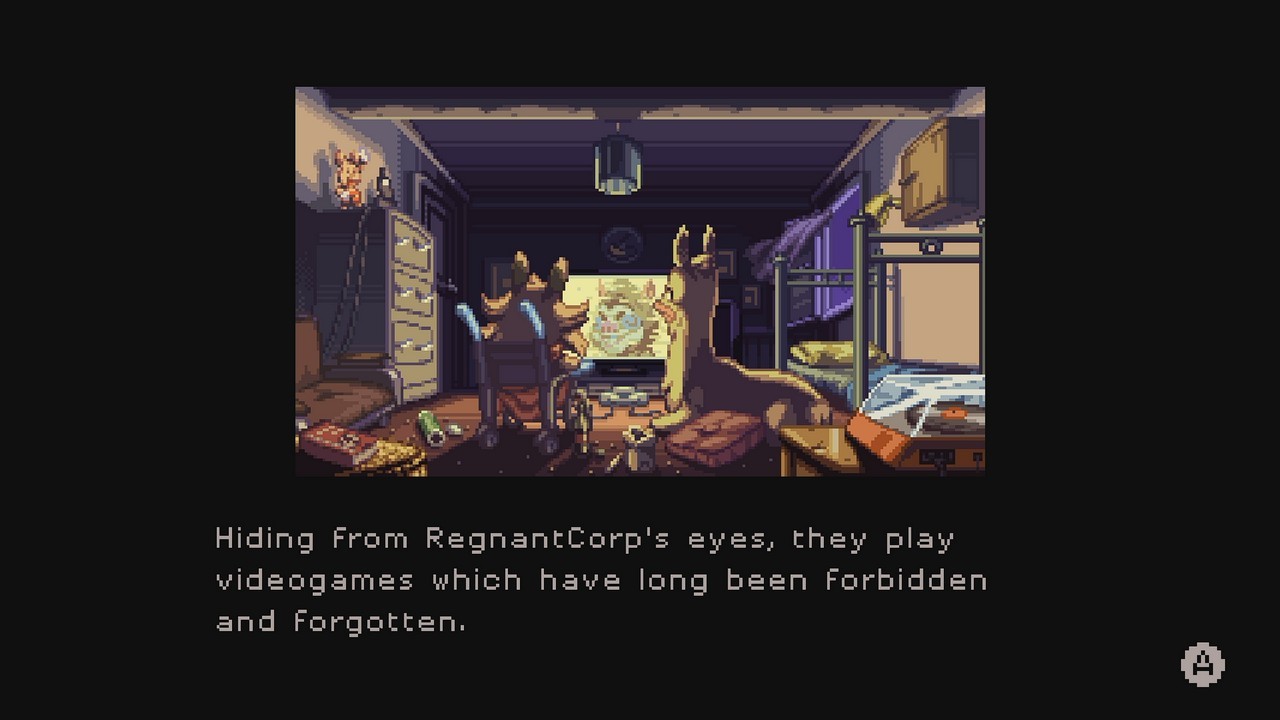 As a homage to classic games, SuperEpic: The Entertainment War is presented in the colorful, pixel art style, meaning fans of retro titles will definitely dig this kind of style. While not the first modern game to use this kind of art-style (as games like Katana Zero and Blasphemous are currently available in the eShop), pixel art games just feels so right to play in the Nintendo Switch handheld mode; though maybe that’s just the nostalgia fan in me talking. 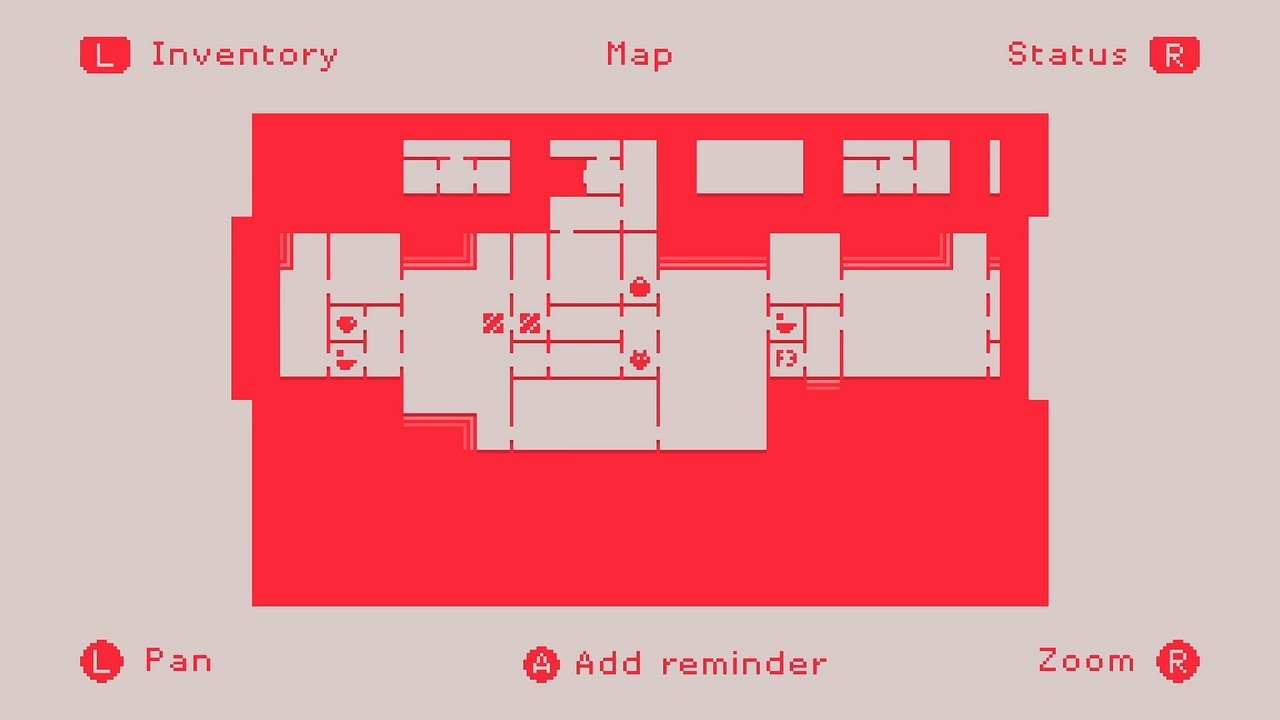 While I do appreciate some of the colorful pixels on my screen, my only complaint is that I just can’t help but get tears in my eyes whenever I look at the Map and the flashing letters in the title screen. I don’t really think its a huge problem, but I would prefer a less shocking color, especially as you will look at the map often in these game. Other than that, I found that the characters and the backgrounds are well drawn and fit the game’s world and overall aesthetic.

The Vampire is in another castle 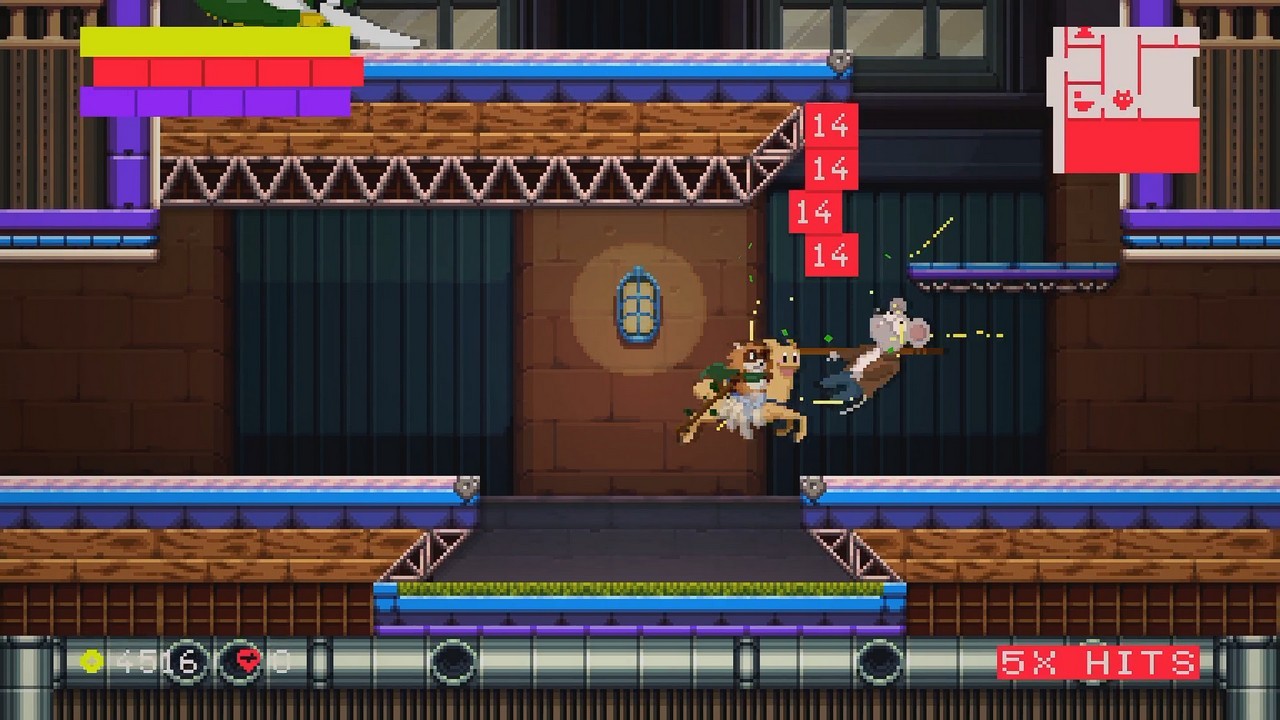 Much like in any other Metroidvania games, the gameplay in SuperEpic is straightforward. You must navigate through the maze like office of RegnantCorp., jumping from platform to platform while going through obstacles and enemies along the way. You can equip Tantan with unconventional weapons that you can purchase along the way such as a stop sign, a guitar, and even a Plunger. Each weapon gives certain advantages like extra range, power, or speed, depending on what you currently have equipped.

Not only can you bludgeon an unsuspecting victim with a golf club, you can also purchase a Rage Attack with gems to do various combos and deal even more damage (if you can hit it). You can perform these attacks by inputting various button combinations. This can help you stun lock a single enemy or clear crowded rooms with an AOE attack.While there are a number of Rage Attacks, I found myself sticking mostly to the Double Strike which works similarly to Alucard’s Sword skill.

Controls overall are really good, but I did find myself wanting to have quicker access to the map. If I’m not imagining things, I remembered that Tantan mentioned that the shortcut key for the Map is the D-pad; unfortunately it just won’t work. So if they could patch this it would be super. 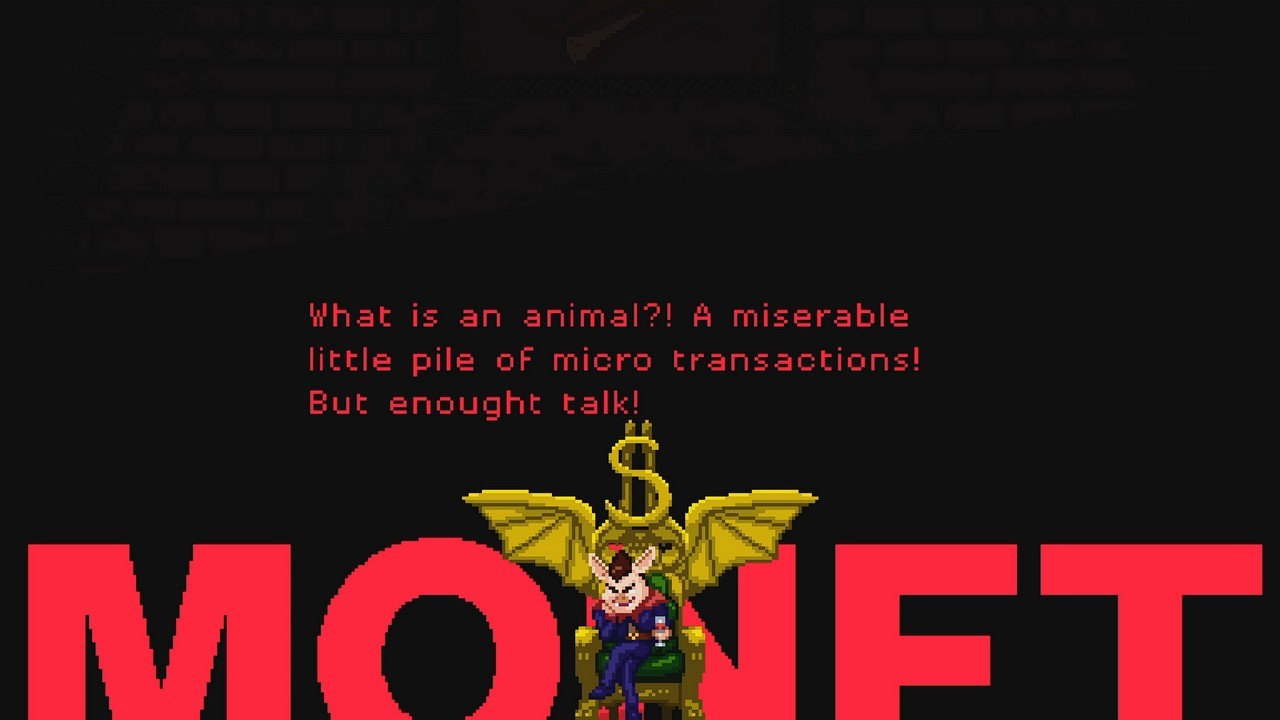 Moving on, if we’re gonna talk about the enemies in the game, they are really easy to deal with as most of them will just run straight at you. But there are some that are just simply irritating, especially the flying enemies. They are not exactly tough, but they just get in my nerves every time I jump.

Aside from fairly simple mobs, I found the game’s bosses underwhelming. After they deliver their humorous and satirical line prior to combat, they just fall easily don’t put up much of challenge. Although they do provide a few laughs, especially when they are a reference to other characters like a Pig who wears an eyepatch who also rides a Metal Gear or a Pig Zombie whose attack resembles that of K9999 from KOF. My favorite though is no doubt the Vampire Pig complete with a melodramatic line from Symphony of the Night. 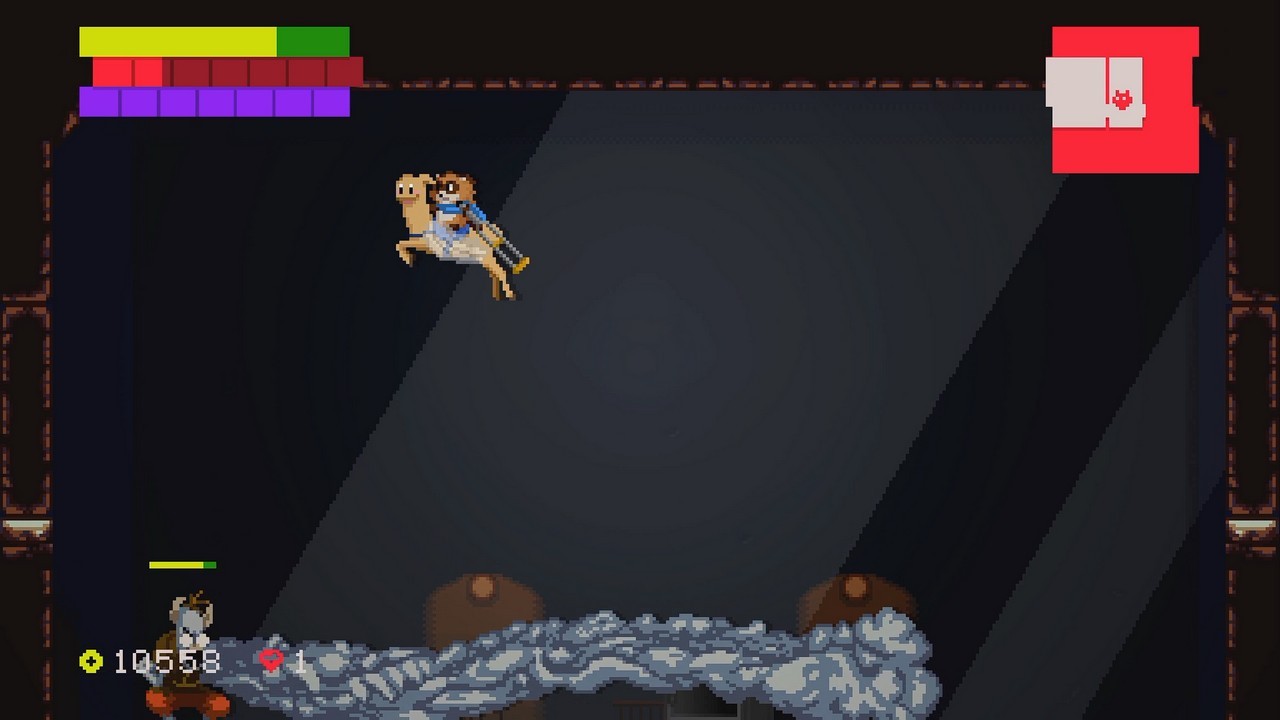 Combat aside, navigation through the RegnantCorp. is easy. Of course, this is a Metroidvania after all, so a lot of backtracking is needed to get that 100% map completion. What’s interesting about venturing inside this evil corporation is how to acquire codes for some lock combinations. If you find one of these, you can definitely see QR codes pasted on the wall, and if you scan it with your phone, you would be redirected to one of RegnantCorp’s games. If you manage to finish the game, you will acquire the code in the end. This is a clever way to integrate the puzzle portion of the game. 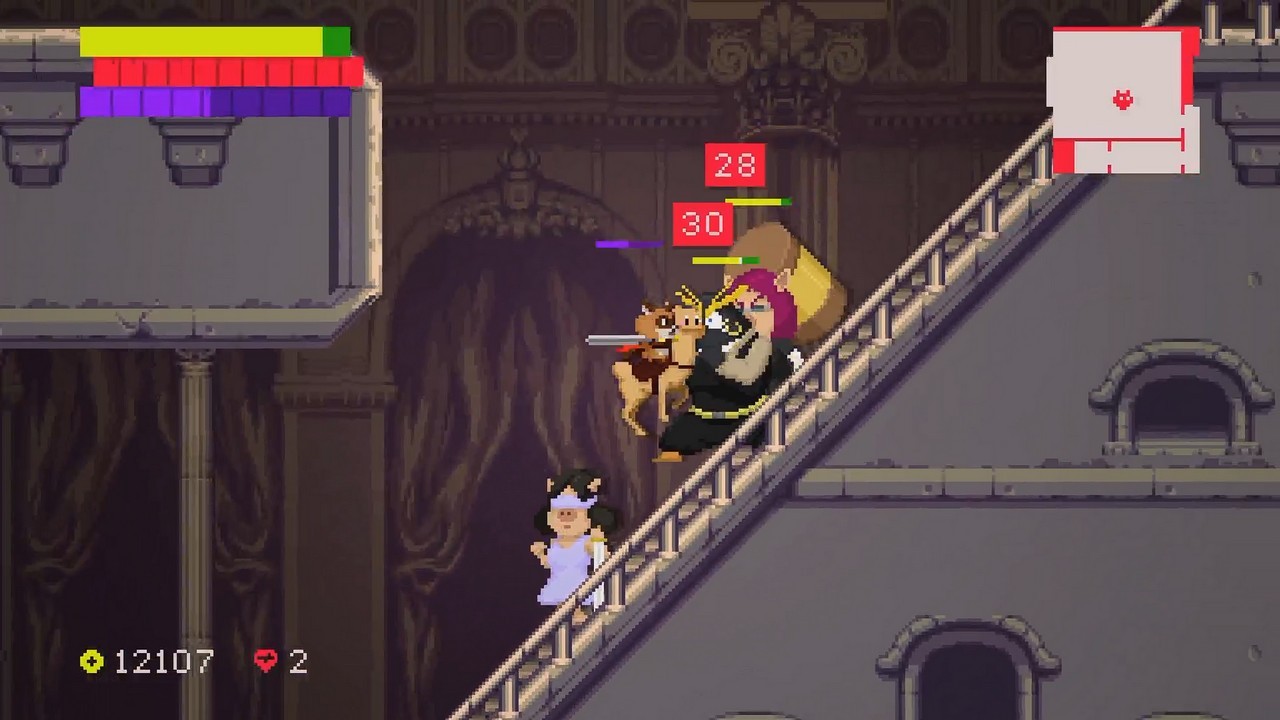 Perhaps the best thing that I actually enjoyed about this game is its commentary about the state of mobile gaming. Not only did they mention it throughout the game’s narrative, the theme is also reflected in the gameplay; specifically in how you power up Tantan.

In this game, Tantan doesn’t gain any level himself, instead you have to buy every equipment to upgrade his stats, including Rage Attacks by collecting Gems–an obvious nod to in-game currencies that most games have nowadays (looking at you Gacha games). 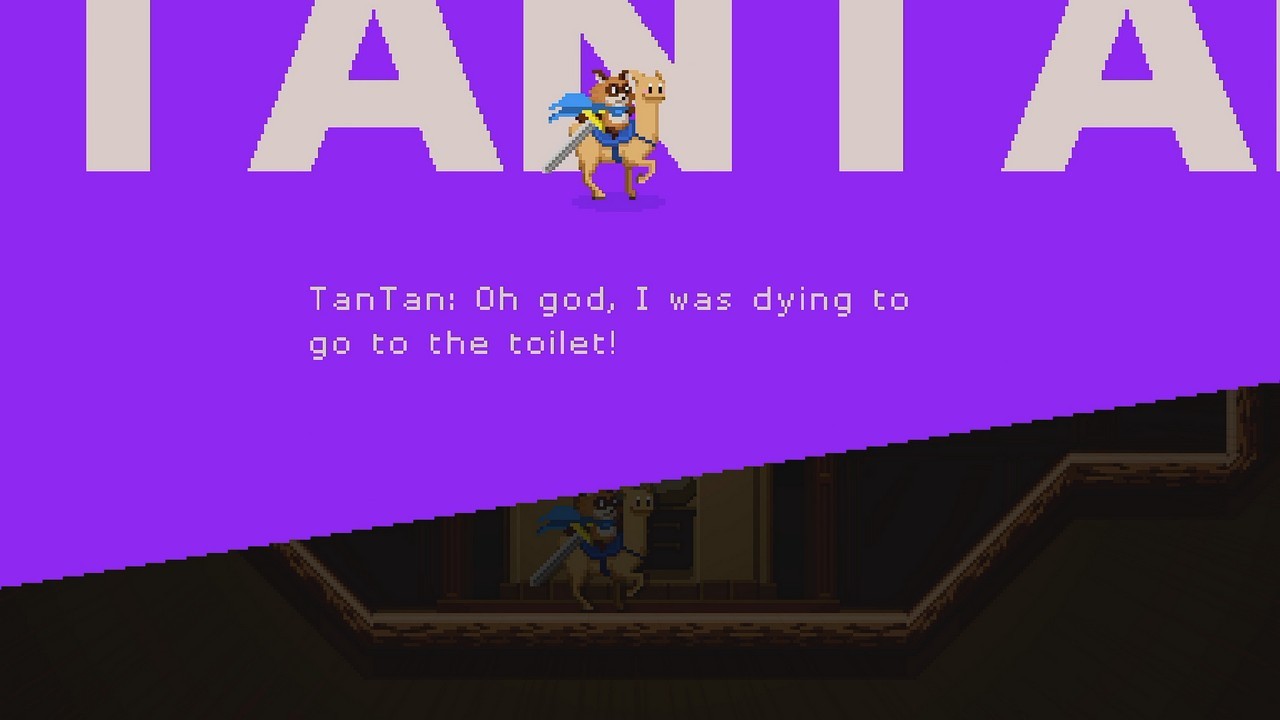 For the replay value of the game, much like in other Metroidvania games, getting that sweet 100% map completion in one go is already satisfying. Depending on your actions, the outcome of the ending will also change; so if you are interested to see the different outcome of Tantan and Ola’s raid, you’ll definitely enjoy another run after your first. Other than the multiple endings though, there is really not much reason to play the game again.

If you do want a more hardcore experience though, at one point you will get a gaming cartridge that contains a different mode where you will play a Roguelike alternative of the RegnantCorp. Sure, you will face the same enemies as in the normal mode, but in this mode, you’ll have to tread lightly because if you die, you’ll start over. Making it even tougher is that your power ups and upgrades won’t be carried on from the main game.

I have to admit, I actually enjoyed playing this game more than I expected it to, especially given that it might seem like just another retro game. Despite its shortcomings like the lack of difficulty of the bosses and some iffy visuals, SuperEpic: The Entertainment War is still a fun game overall thanks to the fun Metroidvania exploration, as well as the interesting setting. If you’re a Metroidvania fan with a Switch, SuperEpic is definitely worth a look.

Previous articleBandai Namco to showcase Gundam MaxiBoost On, Scarlet Nexus, and more at ‘BNE Fun Live’
Next articleDownload all your favorite apps and more on the P40 Pro+ with Huawei’s Petal Search Widget

SuperEpic: The Entertainment War Review | Embark on a Retro RevolutionDespite not really living up to its "super epic" name, SuperEpic: The Entertainment War does provide an interesting premise with oddly wonderful humor. The game also has satisfying controls and a well-designed map which make the game fun in spite of fairly easy combat. Overall, this is a good Metroidvania game for genre fans.