Play your role as a Hero or Monster in the OPM universe. 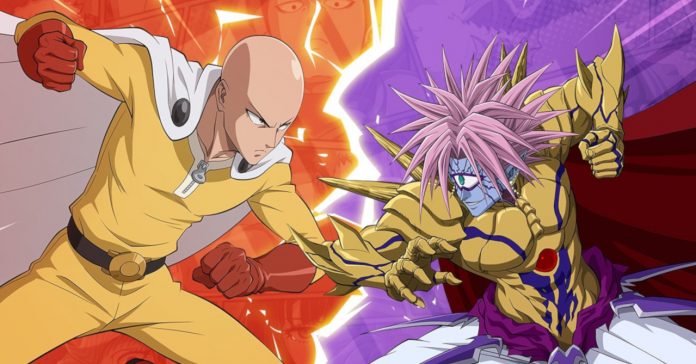 Last June, FingerFun Limited officially released the One Punch Man mobile game for the android devices, based on the very same anime/manga One Punch Man that follows the tale of the strongest hero that nobody knows (hey this brings back memories). With over 10 million downloads by the time of writing, One Punch Man: The Strongest is still going strong. So what could be the reason behind this? Is the game really that good? If you’re an OPM (One Punch Man) fan and you’re on the fence with this game, then this review is for you.

Since this is an official OPM game, the moment you start the app, you’ll be greeted by the explosive JAM Project – THE HERO!! opening song. I have to say, it is still one of the best anime opening songs I’ve seen, injecting fans with adrenaline as they get ready to dive into the game. Since the game takes place in the same universe of OPM, the story is pretty much the same and are told through snippets of cut scenes from the anime. The execution of how the game retells the story from the anime is nothing short of SUPER since character sprites are rendered spectacularly (along with their movements) and the entire original voice cast comes back to lend their voices to the game. Making fans of the series even more familiar to relieve epic and funny moments of the series.

Aside from the familiar premise, mobile gamers should feel right at home with this game’s system. With its combination of turned-based combat and card game collection (which you can get via a gacha), you can form your dream team of Superheroes or Monsters from the show except for Saitama himself. The Caped Baldy is just too strong for the other cast to handle, but we’ll talk more about him a bit later.

Characters are ranked from SSR, SR, R , and N; they are then divided into three factions which are Heroes, Outlaw, and Monsters which determines their strength and weaknesses. Each hero also has has their own abilities that they can offer in battle. Almost everyone from the anime is here, even Dr. Genus’ Clones are here; although I’m gonna be honest, I think its a bit much too include that many side characters just to have the reason to fill up the roster, but it seems this cannot be avoided since it is a game based on a anime series. So it really is up to you if you want to go for a Hail Mary gacha pull, but pro tip: ALWAYS do a 10 pull gacha as it has higher chance of pulling an SSR character. As you might want to get characters like Atomic Samurai early since his Atomic Slash can deal damage to the whole enemy team.

If you already played games like Epic 7, then you can definitely find the similarities in the battle system between the two game. In both games, 2D character sprites brawl out and takes their turns to lash out an attack. But here in OPM: The Strongest, in each turn you fill-up your energy meter so your characters can unleash their own special moves and an Ultimate. Ultimate moves vary per character, with some having an AOE attack that affects the whole row of enemies while others give buffs that will give you a edge on your encounters.

While the combat is nice, one thing I didn’t like is the fact that some battle features are disabled from the get go. For instance, things like the animation speed up or auto-battle mode are locked until you to get to a certain level. There’s also the fact that it can get a bit tiring to see Ultimate moves animations all the time as they’re are basically just clips from the anime. But the good thing is that the level requirement is not massive and can be reached within a hour of playing. Plus, you can always disable the Ultimate animations in the system menu if you get tired of it or to save you lots of time while farming.

Also, if you reach a certain level, you can have up to 6 characters in your line up that you can mix and match. And many characters can trigger special bonuses when they are paired with another character which improves their stats and gives various helpful effects. If you are familiar with the anime, it can help you know which characters can trigger these bonuses; but some combinations are still unique and seems random, so experimenting with the line up can prove to be a nice surprise. To help you out though, there’s a nifty character chart for combos.

Much like in any other One Punch Man games, Saitama himself is not playable in the traditional sense as he could just end the game without breaking a sweat. But it doesn’t mean that he won’t make any appearance; instead of fully controlling Saitama, he can be called in battle as a aid by filling up the One Punch Gauge. Once summoned, he will end any unfortunate foe in his paht with just one blow. Do keep in mind that you can only do this once and filling up the gauge takes time, so better save it for strong bosses and disable the auto battle mode so you wont waste this one chance.

Other things that Saitama can do is he can be sent out to clear stages to do sweep missions where he will automatically clear the stage and earn that said stage’s rewards for easy farming. You can also send Saitama to train which will also yield bonuses. Or if you progress through the story enough, you can unlock puzzle pages for each stage that, once completed, will raise your BP.

The best part about this game for me though is that it is quite F2P friendly as there are lots of bonuses that yields crystals, gacha tickets, and various materials which can all be obtained by just playing through stages and completing tasks. So paying is highly optional to get ahead, like buying the novice pack that includes the Hero Fubuki which you need to shell out around USD 0.99 (PHP 49.34). But if you are a bit stingy about this kind of stuff, you can just work yourself through everything.

With its wonderful presentation and familiar soundtrack, fans of the series can really get hooked on playing and building their own league of Heroes or Monsters in One Punch Man: The Strongest. The gameplay itself is enjoyable enough to meet the standards of mobile RPG fans with tons of challenges and game modes to unlock; plus it gives enough rewards for F2P players, so everyone can rest assured that this is not entirely a pay-to-win game. Although the sad part is  that not everyone from the show is currently available, so we still have to wait for future updates for characters like Garou to show up.

In conclusion, OPM: The Strongest is a good pick not only for the fans series, but for those who are looking for a good RPG mobile game that will give them lots to do during their downtime. This game will definitely provide hours upon hours of entertainment as it stands now, and there’s even more content to come in future updates.