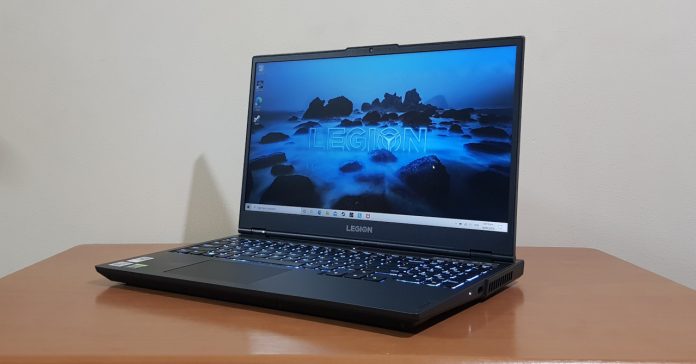 Last week, we got our hands on the Legion 5i, a new gaming notebook from Lenovo that releases in the Philippines soon. What makes the laptop interesting is that packs an RTX 2060 GPU, all at a price tag that’s well below PHP 100k. In my first impressions of the Legion 5i, I found the laptop to be a promising follow-up to last year’s Legion Y740. After all, both laptops are similar in size and feature the same graphics card. 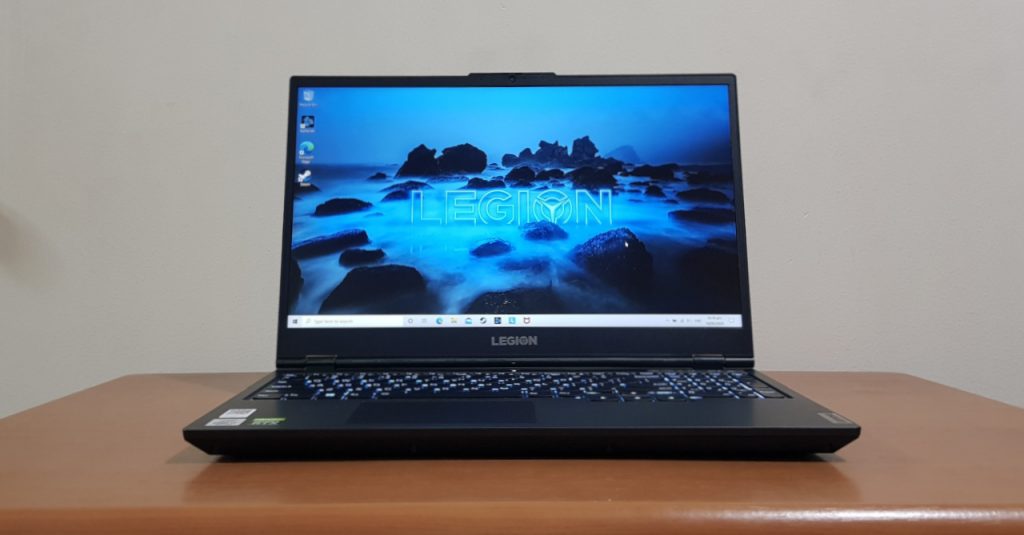 While last year’s Legion Y740 was priced at PHP 119,995, the new Legion 5i has an SRP that’s much more affordable than that. Given its more budget-friendly price tag, does the Legion 5i still deliver for gaming and everyday use? Find out here in our full review of Lenovo’s new Legion 5i. 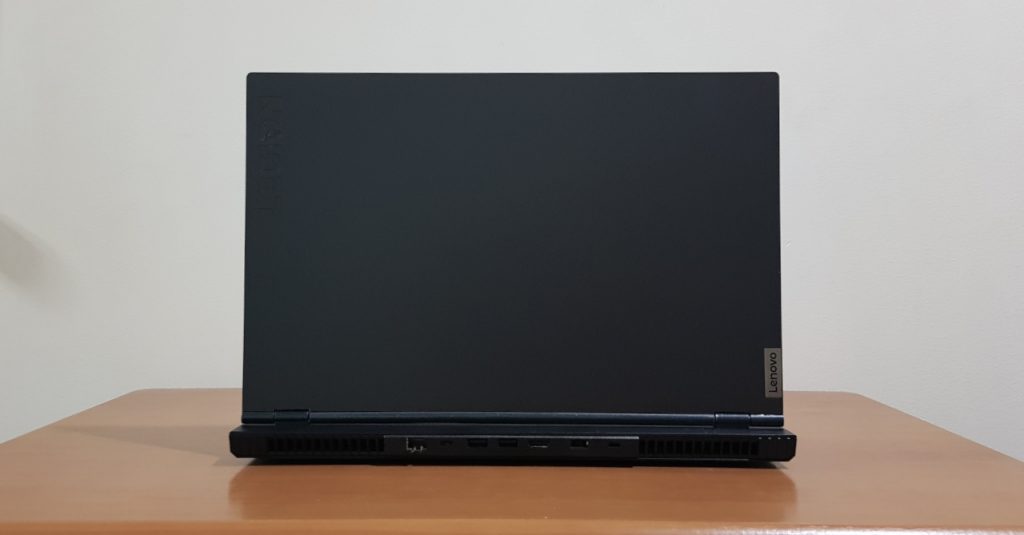 As I mentioned in my first impressions of the laptop, the Legion 5i sports a sleek look that’s even more low-profile than the already “stealthy” Legion Y740 from last year. In the last year or so, Lenovo has mastered this subtle design, making its Legion gaming lineup a great option for gamers who also use their laptop in work or outside. After all, not everyone wants to whip out an aggressively-designed gaming machine in a meeting.

While the Legion 5i’s design is low-profile, it’s far from boring. For one, the Legion logo on the top left of the cover has an iridescent color that adds a bit of pop to the laptop’s look in certain angles. Plus, the Legion 5i also has sharp angles and other design elements that hint at its gaming prowess.

For I/O, the Legion 5i has a wealth of connectivity options, most of which can be found at the back. The laptop’s ports include one USB Type-C port, four USB Type-A ports, one HDMI 2.0 port, one 3.5mm combo jack, and one ethernet port. The 5i’s I/O ports should be enough for everyone, though an SD card reader would’ve been nice. 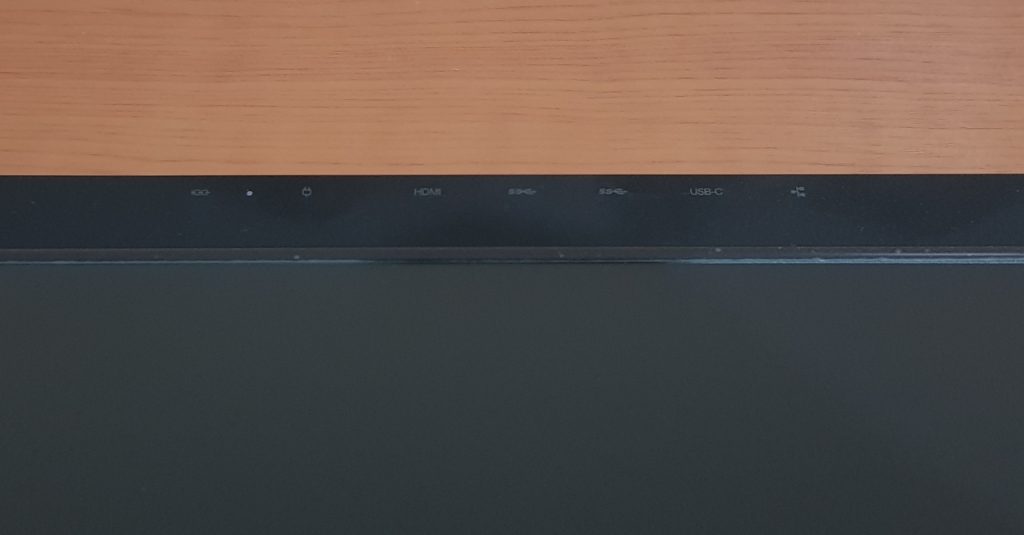 One interesting thing about the Legion 5i is that the ports at the back are clearly marked at the top. What this means is that you won’t have to move the laptop around when plugging in a USB flash drive or an HDMI cable. A small touch, but it goes a long way to improve the laptop’s usability. 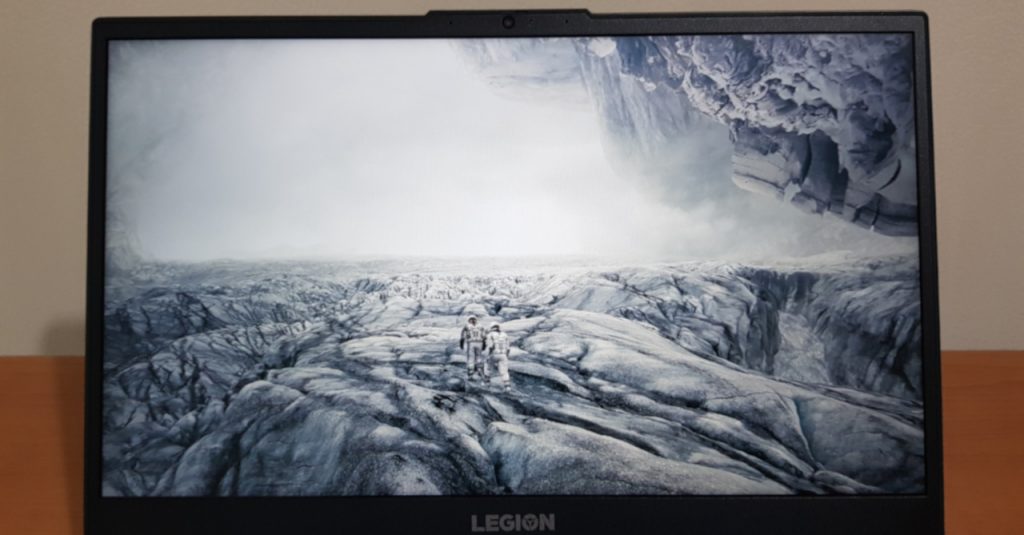 The Legion 5i features a 15.6” FHD display with a 120Hz refresh rate. While it’s designed first and foremost for gaming, the laptop’s display is a pretty good match for binge-watching movies and TV shows. Thanks to the screen’s slim bezels and good display output, the Legion 5i provides a good viewing experience that should satisfy most users.

The only issue with the Legion 5i’s screen is that it is a bit on the dimmer side. If you’re indoors, you’ll have to put the brightness to around 50% or so. 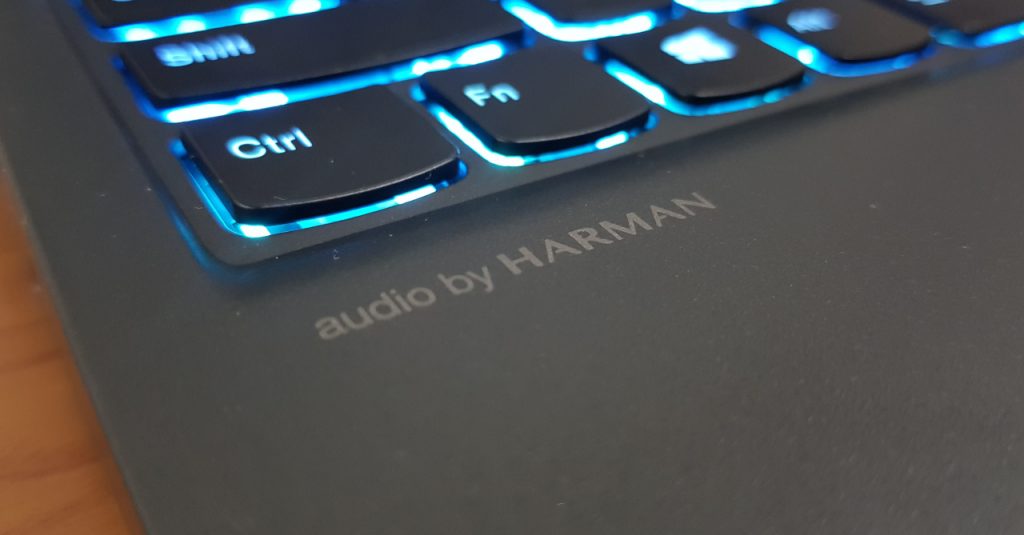 In the audio department, the Legion 5i packs onboard speaker that are tuned by Harman. What this means is that audio quality from the speakers is pretty good, albeit a bit quiet. If you’re going to watch a movie, listen to music, or play games on the 5i, the onboard speakers are decent enough, but headphones/speakers are definitely recommended. 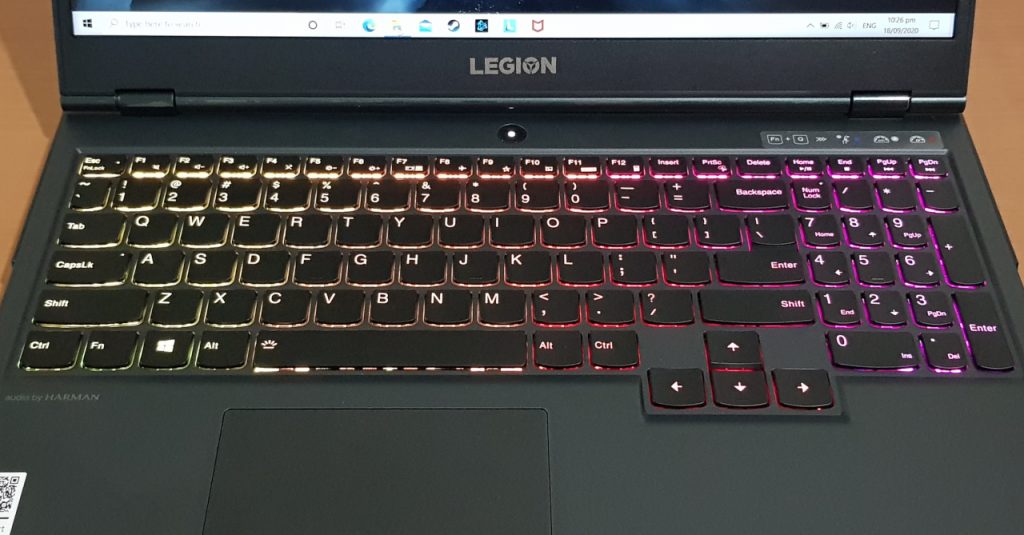 Unlike the Legion Y740 which had a tenkeyless keyboard, the Legion 5i has a full-size keyboard (complete with a number pad). This is a pleasant surprise, especially as both laptops are around the same size, so I expected the 5i to not have a dedicated numpad.

While it may seem like the addition of a number pad makes the laptop’s keyboard feel cramped, I did not have any problems with it. Whether you’re typing or gaming, the Legion 5i’s keyboard feels great to use. The keyboard also has a fairly nice tactile feel to it; not mechanical keyboard level, but good enough for a laptop keyboard. To top it all off, the keyboard has customizable RGB lighting. 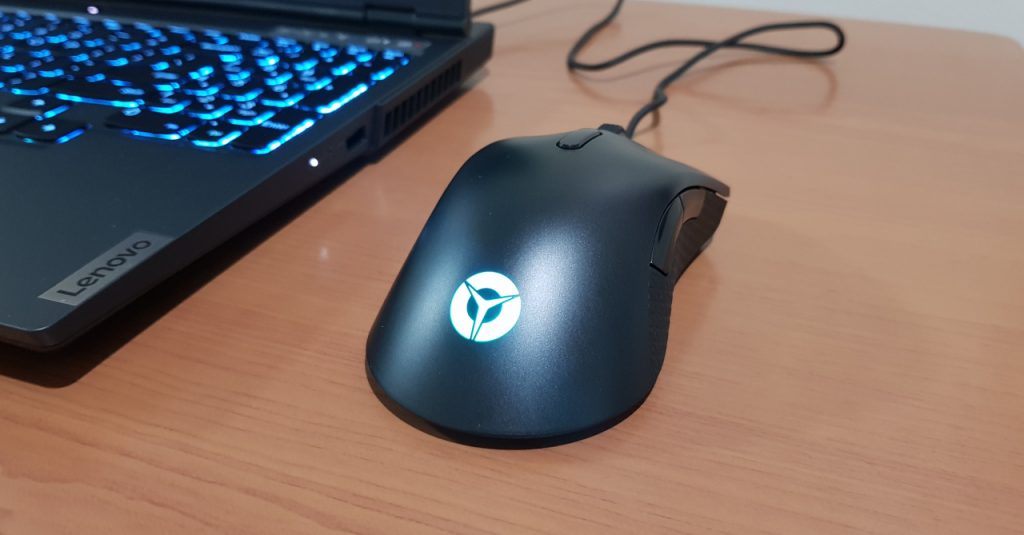 The Legion 5i also comes with an M300 RGB gaming mouse inside the box; this is similar to most new Lenovo gaming laptops that come bundled with a gaming mouse. While it’s not a gaming mouse with all the bells and whistles, it’s not bad at all for a freebie!

Now we move on to the most important aspect of any gaming laptop–game performance. The Legion 5i is powered by a 10th gen Intel Core i7, as well as a GeForce RTX 2060 GPU. As expected, this setup proved to be powerful enough for both esports titles and triple-A games at 1080p.

Given the powerful internals, playing esports titles is a dream on the Legion 5i. For example, Dota 2 ran at an average of 80 FPS on max settings; this meant it was able to take advantage of the fast 144Hz refresh rate screen.

Overwatch meanwhile, ran at 110-120 FPS on the Epic graphics setting at 1080p. Coupled with the fast refresh rate display, playing Overwatch on the Legion 5i is a great experience.

Moving on to triple-A titles, the 5i had an average FPS of 64.35 on the Rise of the Tomb Raider in-game benchmark tool. Meanwhile, in actual gameplay, the FPS count hovered at around 50 FPS. While this is a pretty good result, the 5i’s performance is a behind that of the similarly specced Y740. This might be due to this specific Legion 5i variant only having 8GB of RAM unlike the Y740 which has 16GB by default.

Another game I tried out is the Resident Evil 2 remake. At the Graphics Priority setting, the game ran at around 80FPS, though there were some dips to 60 in certain cutscenes. 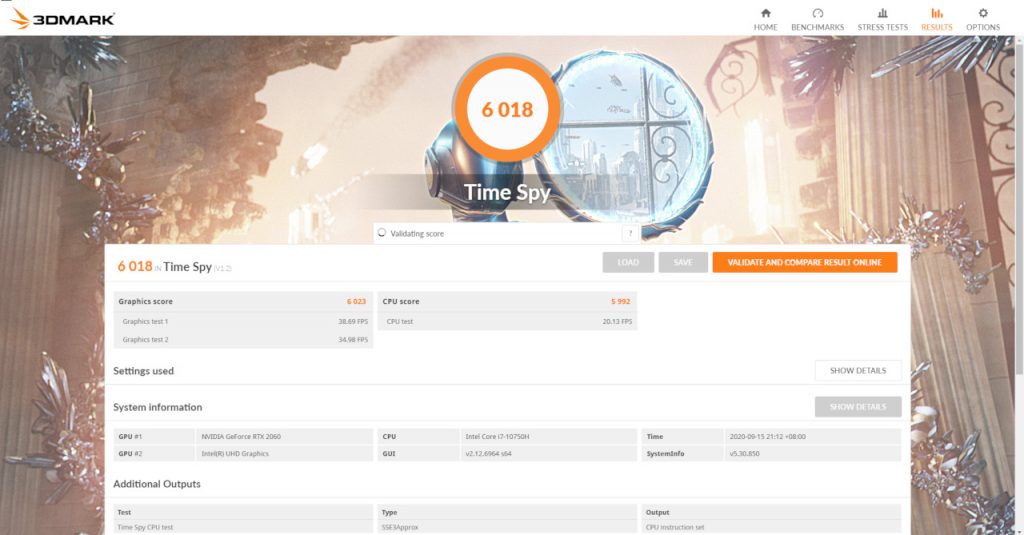 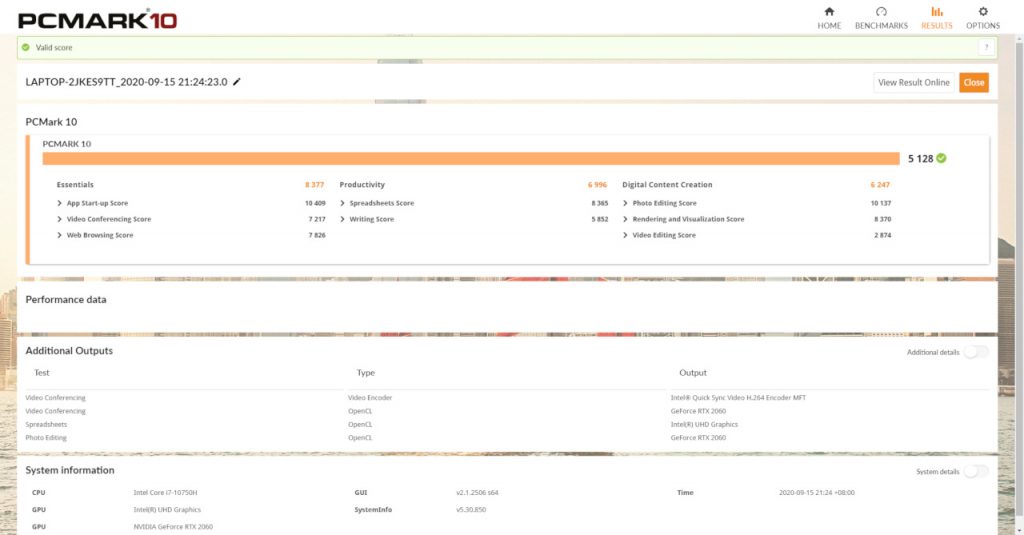 Given that it scored well in benchmarks, it’s no surprise that the Legion 5i is a great laptop for day-to-day use. Whether you’re just browsing, using Office applications, or editing photos/videos, the Legion 5i will hold up without any issues. Though if you do plan on using the laptop for more heavy video editing or possibly 3D work, an upgrade to 16GB RAM is a must. Good thing upgrading the Legion 5i shouldn’t be a challenge given the easy access to the memory slots.

One thing I liked about the Legion 5i is that, like most Lenovo laptops, it has a shutter for the webcam. It’s a small touch, but it’s an appreciated addition; privacy is important after all. 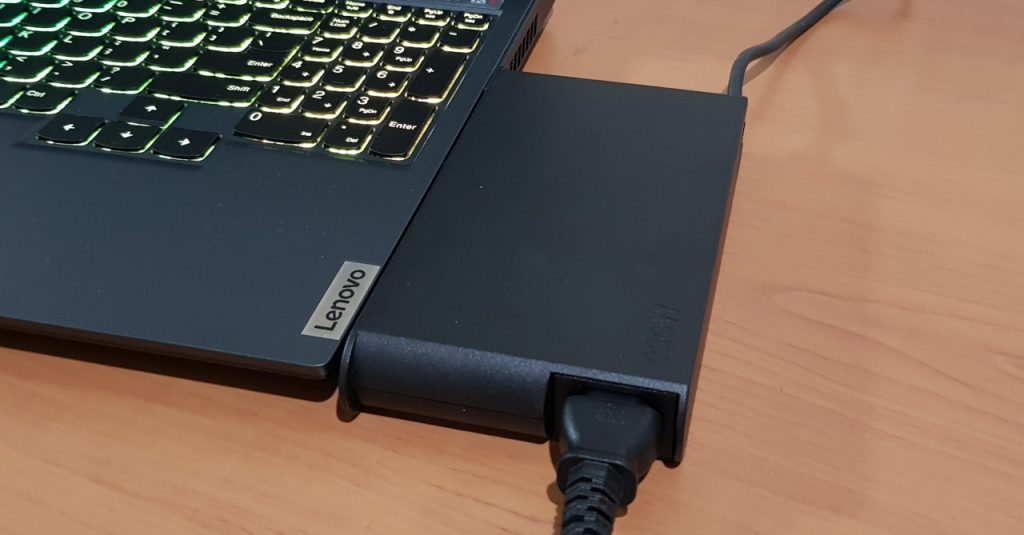 As for battery life, the Legion 5i can last for a decent amount of time on a single charge. After playing a 2 and 1/2 hour movie on the Legion 5i at 50% brightness and volume, the laptop still had around 50% left. This should mean you can use the Legion 5i for a couple of hours without being plugged in (unless you’re playing games that is). 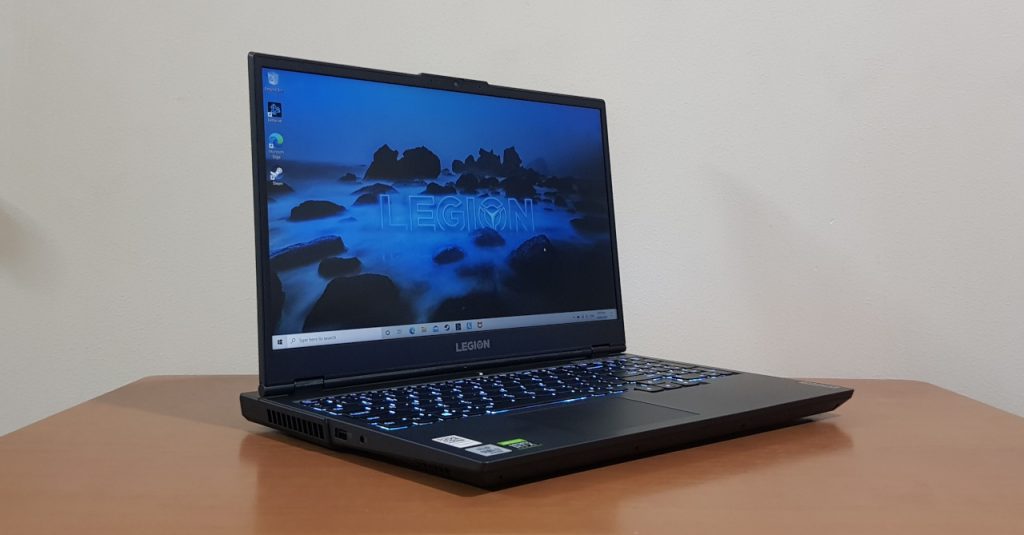 Taken on its own, the Legion 5i is another impressive laptop from Lenovo thanks to its sleek design, good display, and excellent gaming/everyday performance. While the laptop’s 8GB of RAM might not be enough for some users, upgrading to 16GB of memory shouldn’t be difficult.

When you consider that the laptop packs an RTX 2060 GPU and is priced at only PHP 78,995 though, it’s clear that the Legion 5i is one of the best gaming laptop deals you can get right now in the Philippines going purely by graphics performance.