A great phone, but not a major upgrade over its predecessor. 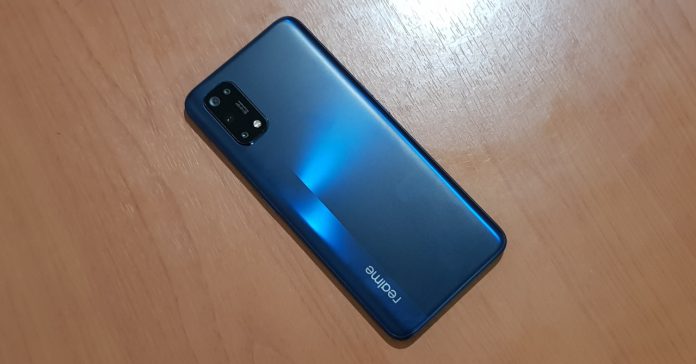 realme has just launched the 7 Pro in the Philippines, and it’s the follow-up to the realme 6 Pro which released earlier this year. As noted in our first impressions of the phone, the 7 Pro has some key improvements over its predecessor, one of which is a larger battery with SuperDart charging. The realme 7 Pro also has a more vibrant AMOLED panel, unlike the 6 Pro’s LCD screen. 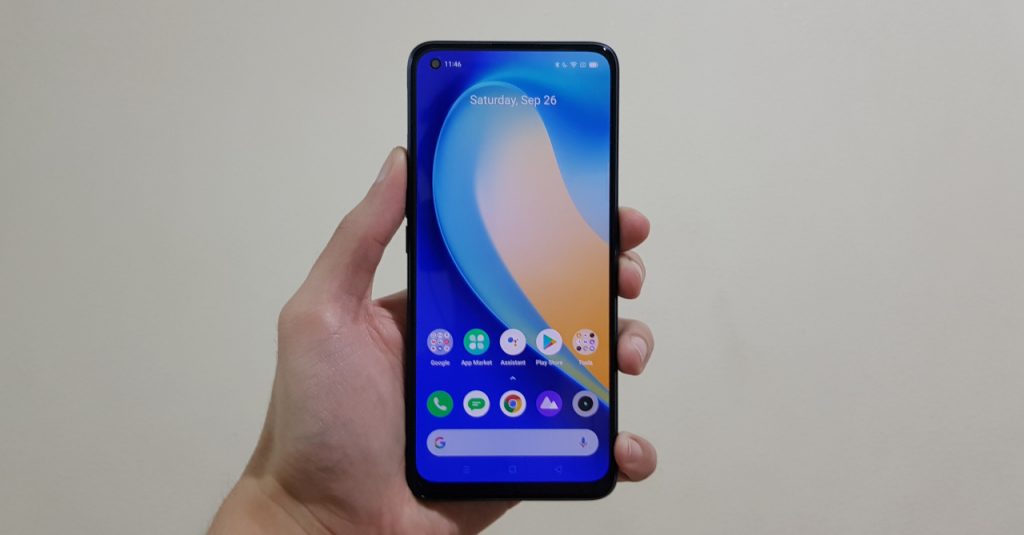 On the flip-side, the realme 7 Pro does not have a dedicated 2x telephoto shooter. Plus, the 7 Pro’s screen only has a 60Hz refresh rate; for comparison, the 6 Pro has a 90Hz display.

While it’s an upgrade in a lot of ways, it also loses some of the 6 Pro’s highlight features. Given this fact, is the realme 7 Pro a great mid-range option for buyers looking to upgrade their old phone? Find out here in our realme 7 Pro review! 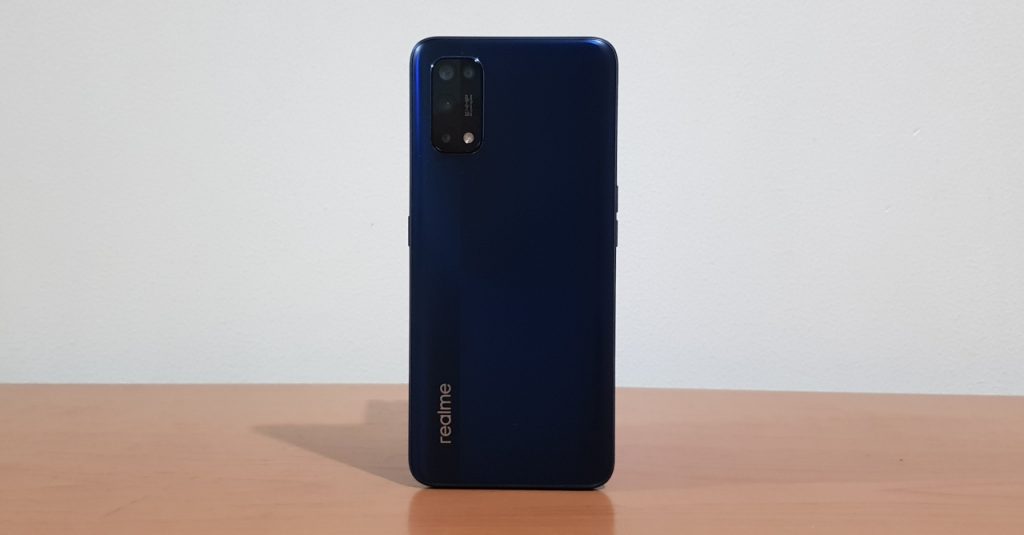 Before we talk about the phone’s features, let’s first take a look at its design. Unlike previous realme mid-range smartphones which had glossy backs, the realme 7 Pro has a matte finish. Thanks to this, the phone feels nicer and grippier even without a case. Don’t worry though, the phone does come with a clear case inside the box in case you need one. 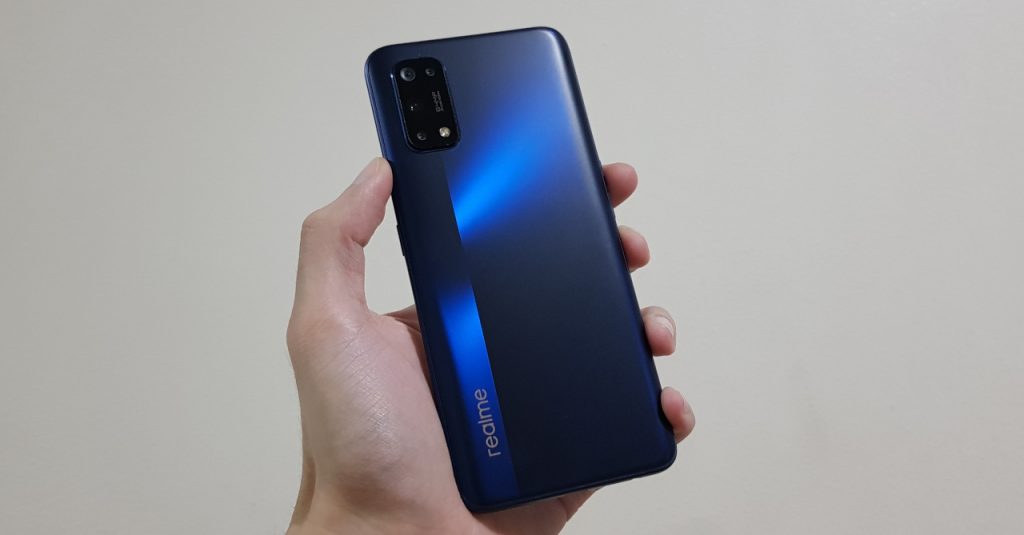 The phone having a matte finish doesn’t make it a plain-looking phone though. The 7 Pro’s back has a nice shine to it, especially when light hits it. While it’s not as instantly eye-catching as the 6 Pro, I personally prefer the 7 Pro’s more elegant design. 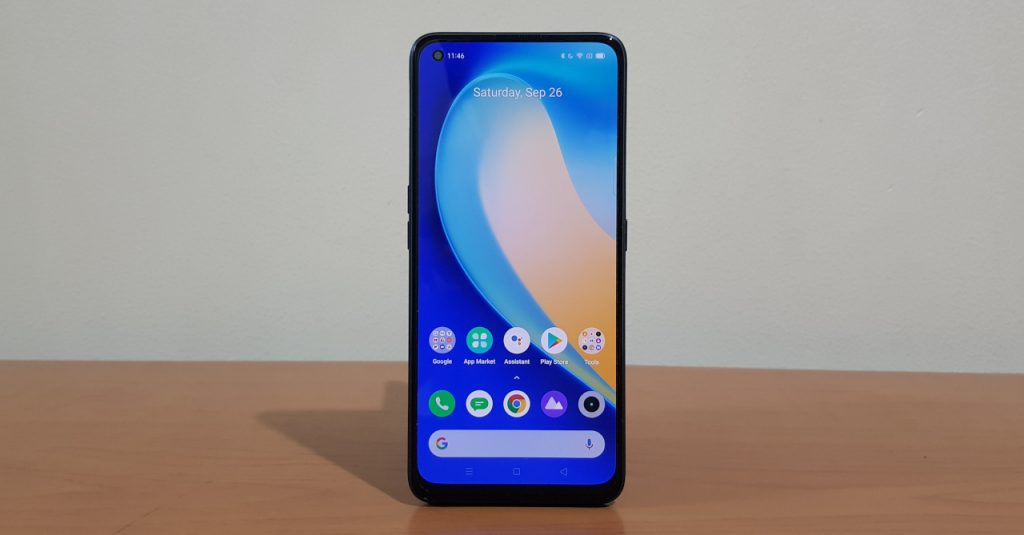 At the front is a 6.4-inch display, slightly smaller than that of the 6 Pro. Because of this, the phone is noticeably smaller than its predecessor, making it easier to pocket or put inside you bag. Plus, the display has Corning Gorilla Glass 3+ which makes it scratch-resistant. 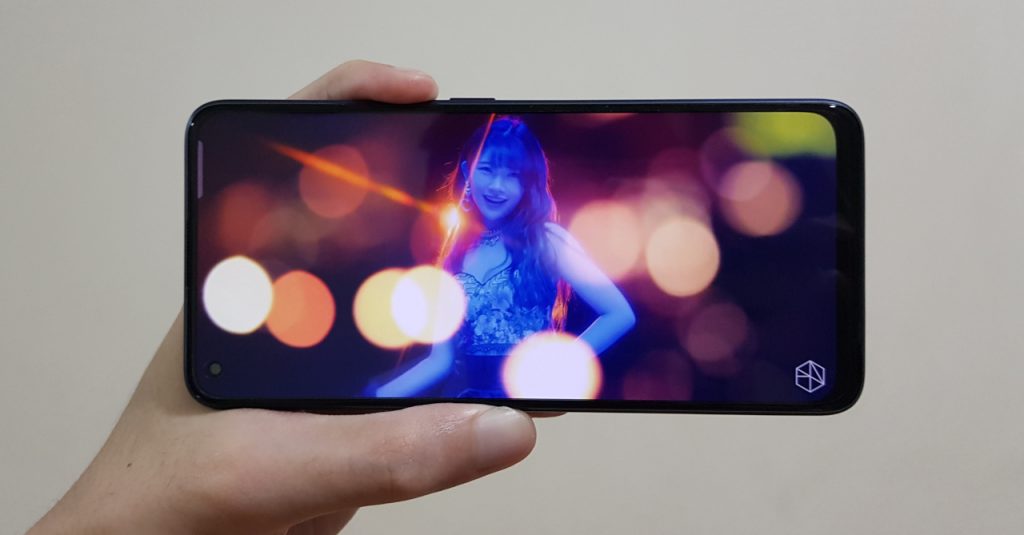 As stated in the intro, the 7 Pro has a 6.4-inch AMOLED display, and it has a Full HD+ resolution. Because the display is AMOLED, it outputs vibrant colors and deep blacks, making it an excellent device for movie/series/anime marathons! And while it’s slightly smaller than the 6 Pro, the 7 Pro’s display should still be big enough to provide a good viewing experience for most users.

For audio though, the realme 7 pro’s onboard speaker is just okay. While it’s not bad by any means, it’s not exceptional either as audio quality and volume are fine, but it could use a bit more bottom end. As with most other smartphones, a good pair of headphones or speaker or headphones are recommended. Good thing you won’t be limited to a Bluetooth device as the 7 Pro has a 3.5mm headphone jack. 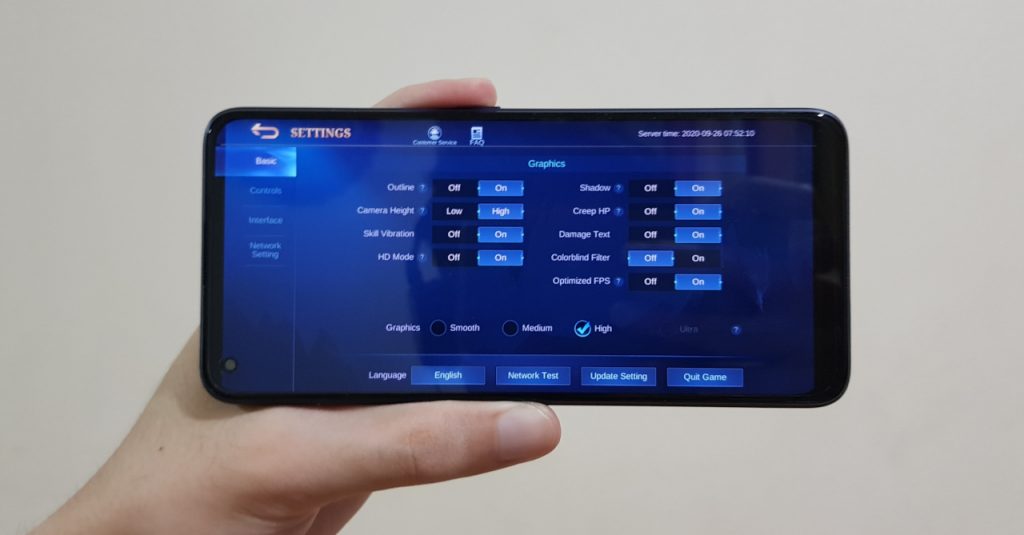 What this means is that 7 Pro will make quick work of most of today’s popular titles, including games such as Mobile Legends: Bang Bang. Specifically, the 7 Pro is able to run MLBB  at High graphics settings with ease and without any framerate drops (at least in my gameplay session. 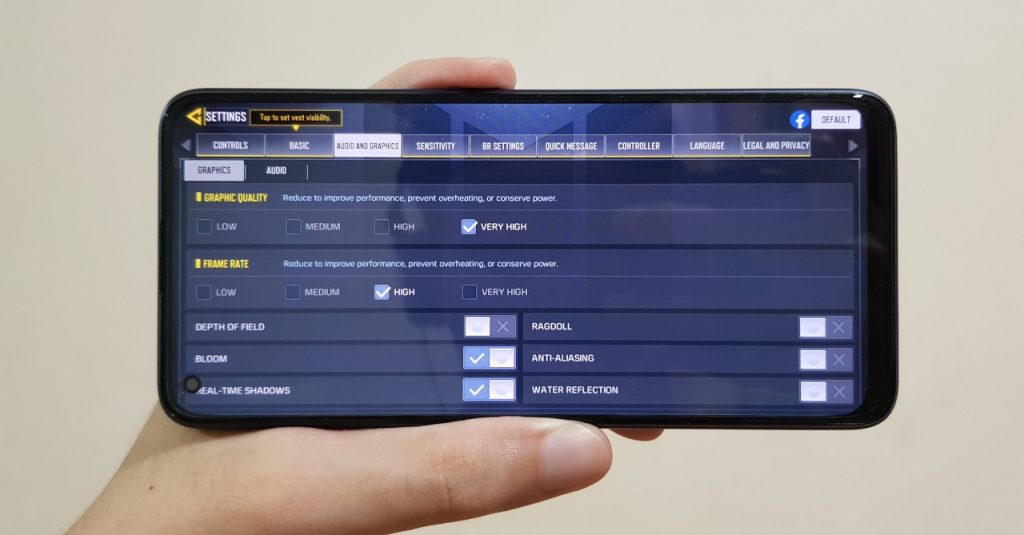 The realme 7 Pro also has enough power to run more hardware-intensive titles such as Call of Duty: Mobile. In fact, the phone was able to run the CoD Mobile at the Very High graphics setting, both in the High and Very High framerate options.

While the 7 Pro is definitely a great smartphone for gaming, losing the 90Hz refresh rate display is a bit of a blow, especially for gamers who play titles with 90FPS support. In this regard, the 6 Pro might still be the better option.

While the 7 Pro loses the dedicated telephoto camera of the 6 Pro, it does get a main camera improvement. For this new mid-ranger realme uses a Sony IMX 682 sensor which promises to be an upgrade over the Samsung GW1 sensor used in the 6 Pro. Aside from this, the selfie shooter on the 7 Pro may no longer be a dual camera setup, but it’s also an upgrade on paper as it’s a 32 megapixel snapper.

The realme 7 Pro’s main camera does not disappoint, especially for daytime shots. When there’s a lot of light, the phone’s 64MP shooter takes excellent shots with lots of detail and fairly natural colors. Though if you turn on the AI Dazzle Color mode, colors tend to pop a bit too much for my liking; but using it will depend on personal preference.

The 7 Pro’s low light performance is also quite impressive, even when just using Auto mode. Though for the best results, Night Mode is recommended as it results in brighter low light photos. When compared to the 6 Pro, the 7 Pro has the slight edge for nighttime photography.

Moving on to the ultra-wide shooter, it is able to take good quality photos in daytime. Though at night, image quality dips noticeably when using auto mode. Good thing Night Mode at least results in usable low-light ultrawide images.

The 7 Pro’s 2MP macro camera performs around what you would expect, with macro photos having decent amount of detail as long as there’s enough light.

The realme 7 Pro’s depth sensor meanwhile, helps in taking good portrait shots with a fairly natural bokeh effect. Finally, the phone’s selfie shooter takes quality photos that are social media-ready, even without post-processing. Though you may want to turn down the AI beautification mode for a more natural look.

As the realme 7 Pro has enough power to run today’s popular games, this mid-ranger is also fast and snappy for everyday use. Whatever app you’re using, the realme 7 Pro shouldn’t freeze or slow down, even when you have several apps open in the background.

The 7 Pro runs on realmeUI which is based on Android 10. While I would’ve preferred less pre-installed apps, the UI is still good overall, especially as it has a lot of nifty features such as the system-wide dark mode.

The highlight of the realme 7 Pro for daily use though is its battery life. As the 7 Pro packs a large 4,500mAh battery, you shouldn’t run out of juice with a full day of medium to heavy use. If you do need to charge, the 7 Pro features realme’s SuperDart charging technology. Thanks to this, the phone can go from 0-100% charge in just a bit over 30 minutes! Plus, a 7-minute top-up will already give you a couple of hours of use.

Finally, the 7 Pro is also interesting for a mid-range as it packs an in-display fingerprint scanner. This feature is usually reserved for higher end phones, so it’s nice to see on a phone at a sub-20k price point. 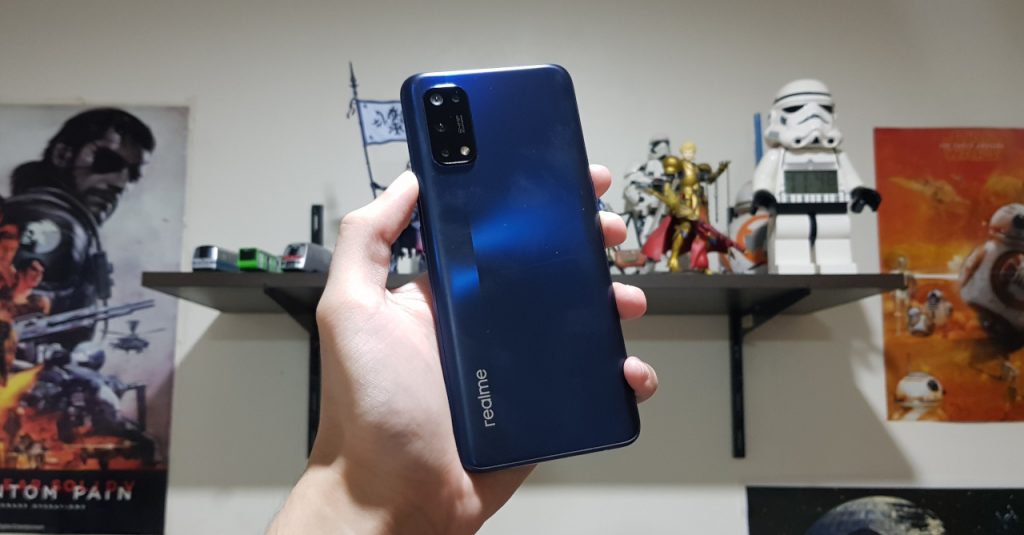 On its own, the realme 7 Pro offers great value. At its price of PHP 17,990, the 7 Pro has great gaming performance, a vibrant display, great cameras, and a good-looking design. Best of all though, the 7 Pro has great battery life that’s complemented by incredibly fast charging.

When compared to the 6 Pro though, the 7 Pro isn’t that big of an upgrade. Not only does the 7 Pro have the same processor as its predecessor, it also loses the 6 Pro’s 90Hz refresh rate screen and dedicated 2x telephoto shooter. While the 7 Pro can still be considered as the better phone overall despite the lack of certain features, the fact that it is PHP 1,000 more expensive makes it a bit tough to fully recommend over the 6 Pro.

But if you’re coming from an older phone, the 7 Pro is definitely a good deal.