Another battery monster from realme! 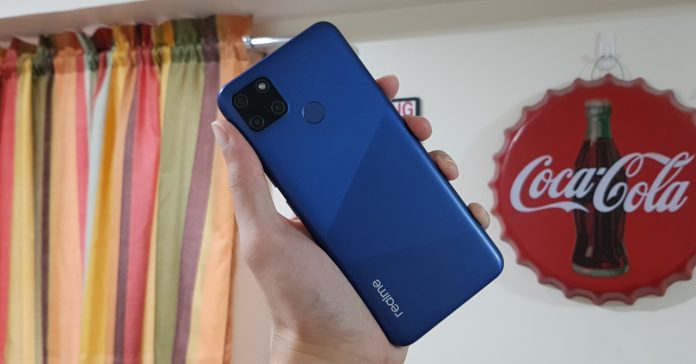 After releasing the C15 just a few weeks ago, realme has launched another entry-level device–the realme C12. In many ways, the realme C12 is similar to the C15 as both phones have a 6.5-inch HD+ display, a MediaTek Helio G35 processor, and a massive 6,000mAh battery. So what’s the difference? The realme C12 has a more affordable price tag, but it lacks the 18W fast-charging and dedicated ultra-wide camera. 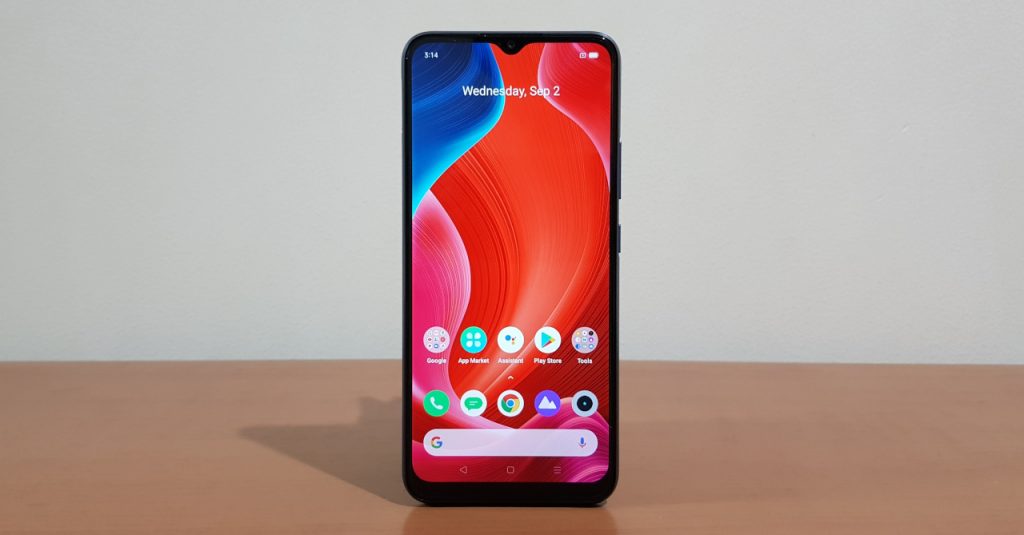 Even with the lack of fast charging and ultra-wide camera, the realme C12 is shaping up to be a great deal. After all, the realme C15 proved to be quite impressive in our full review as it had plenty of power for gaming and good camera capabilities for a budget-friendly smartphone.

Does the realme C12 deliver in actual use though? Here’s our full review! 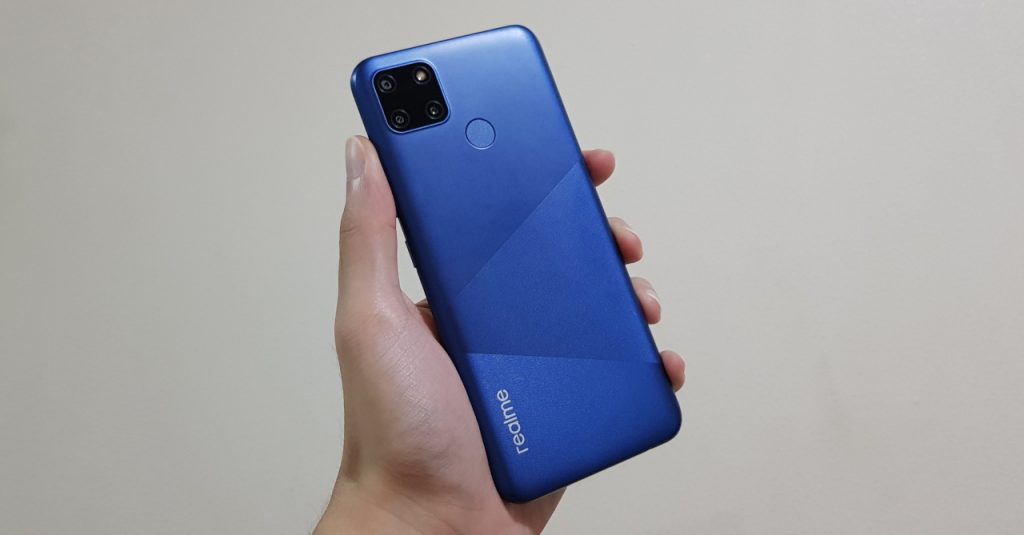 From the back, the realme C12 looks almost exactly like the C15, with both phones having a polycarbonate body with realme’s Geometric Gradient Design. While I wouldn’t call the phone’s feel premium, the C12 does feel nice and grippy in the hand. 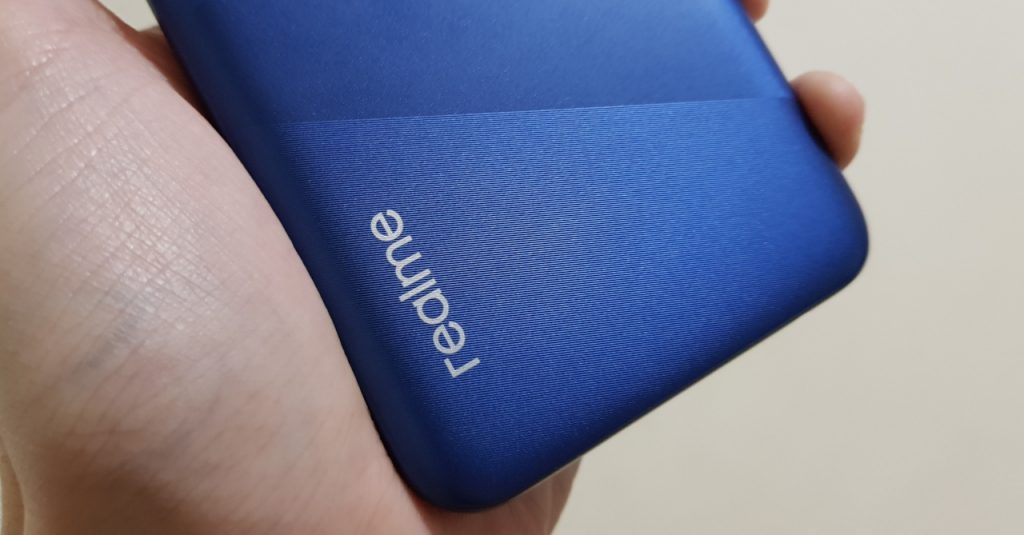 Aside from providing a good grip, the matte polycarbonate back of the realme C12 also means that it’s not a fingerprint magnet. Thanks to this, you can comfortably use the C12 even without a case; something that I can’t say for most phones with slipper glass or glass-like backs. 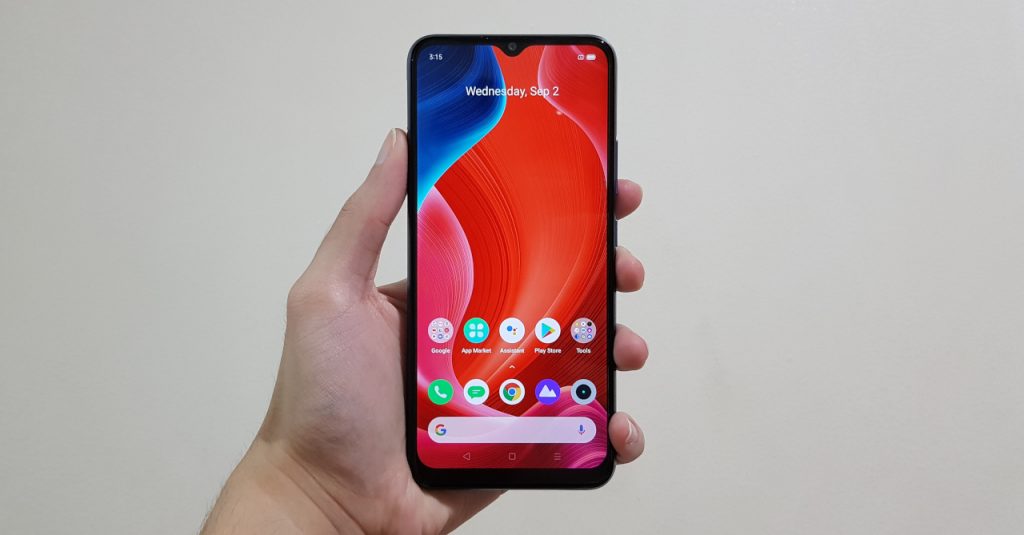 Moving on to the front, we can see the phone’s 6.5-inch screen that has slim side bezels and a small waterdrop notch at the top which contains the phone’s 5MP selfie shooter. For the most part, the C12’s front looks quite nice, though it does have a slightly noticeable chin. Still, the phone looks quite nice overall, especially for a budget smartphone. 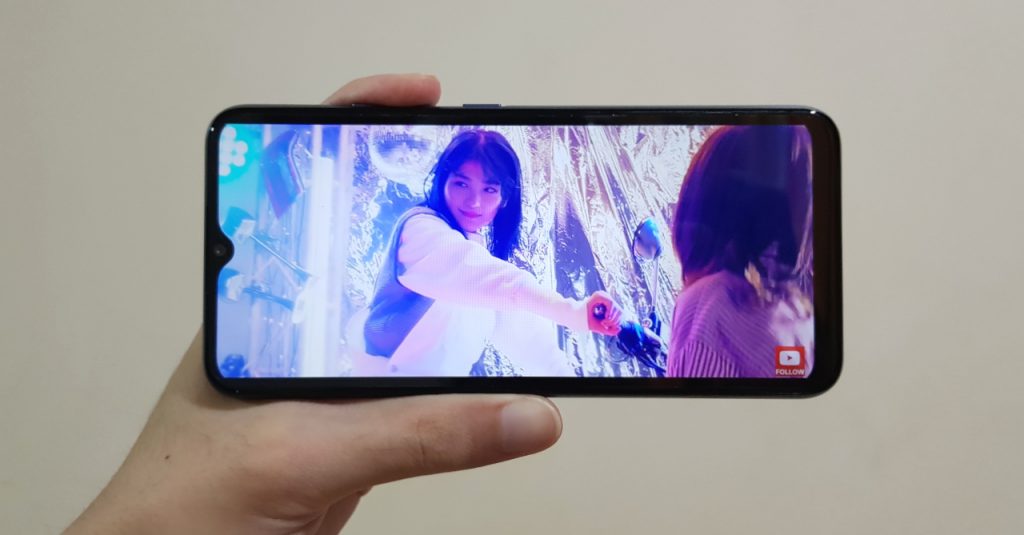 Speaking of display, the realme C12’s 6.5-inch screen is pretty decent for binge-watching, even if its resolution is only HD+ (720 x 1560). While its video quality might not be the best given the 720p resolution (as you may see some blurriness here and there), the C12’s screen still works decently well for binge-watching movies, TV shows, or anime.

For audio though, the realme C12’s onboard speaker is not exactly high quality. Sure, it can get decently loud, but audio quality isn’t the best as it can sound quite tinny and distorted, especially at higher levels. Of course, if you don’t have any audio device, you can use the onboard speaker for binge-watching of music listening. Though for a better experience, external speakers or headphones are recommended, either via Bluetooth for via the C12’s 3.5mm headphone jack.

Powering the realme C12 is a MediaTek Helio G35 processor, a system-on-a-chip designed for budget friendly phones. Does it deliver for gaming? For the most part, yes! 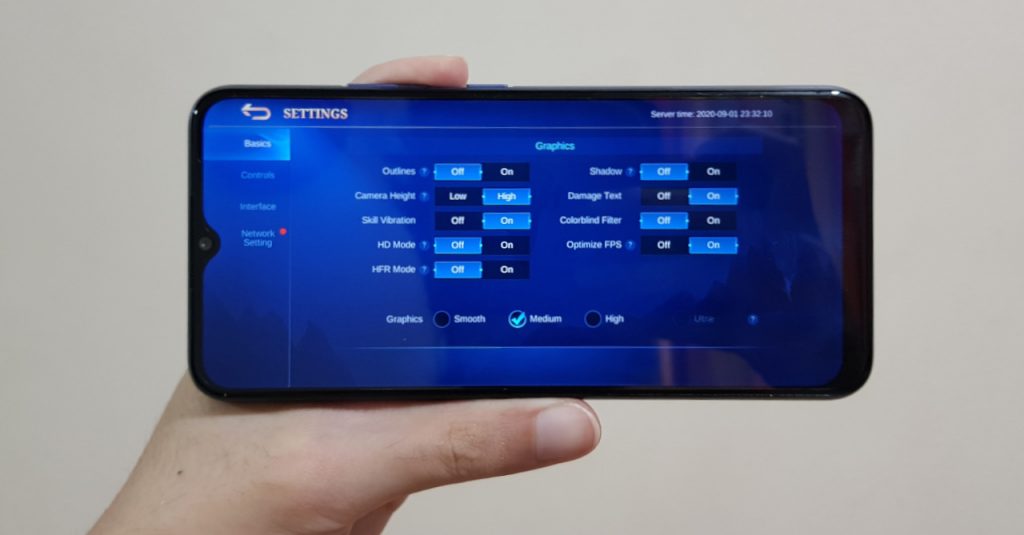 For popular games that are not too hardware-intensive such as Mobile Legends: Bang Bang, I did not run into any slowdowns while using the realme C12. While ML:BB was set on the Medium graphics setting by default, the C12 was able to run the game at the High graphics setting. 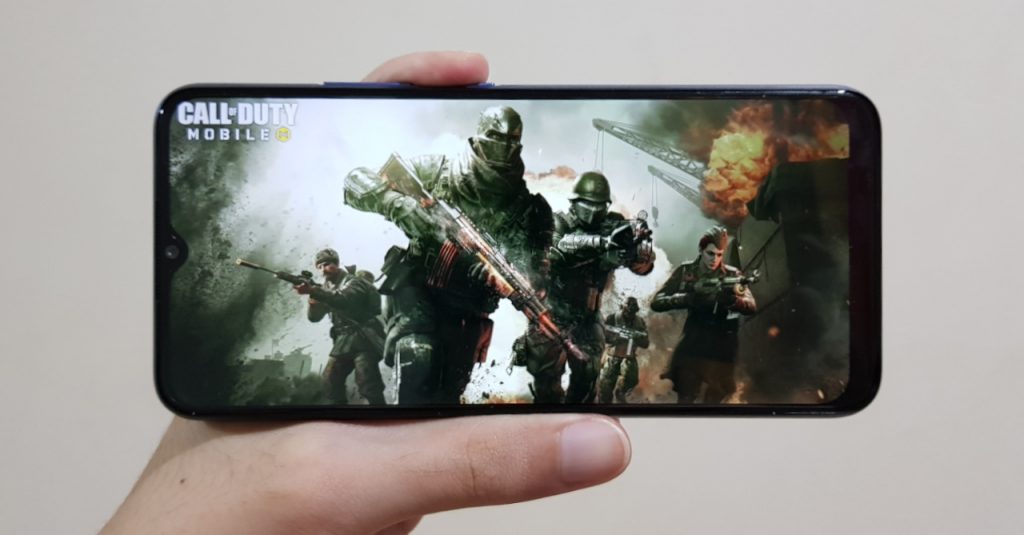 The realme C12 also proved to have enough power to run more hardware-intensive titles such as Call of Duty: Mobile. In my test of the CoD Mobile on the C12, the game was able to run smoothly on the Low setting. As with other entry-level phones though, CoD Mobile can only be set on the Low graphics setting, with no way to bump the graphics up to Medium or High.

On the camera department, the realme C12 has a 13MP + 2MP B/W  + 2MP triple rear camera setup, as well as a 5MP selfie shooter. As I said above, aside from the lack of a dedicated ultra-wide camera and a front camera with a lower megapixel count, the C12 has the same cameras as the more expensive C15. So it’s no surprise then that the C12’s cameras take shots of fairly similar quality with the C15.

Using the main 13MP camera, the realme C12 can take pretty good shots in daytime, with images having of good quality with fairly accurate colors. Indoor shots taken with the C12’s main camera are also of high quality, with a good amount of detail being kept.

At night though, the C12’s main camera can struggle to take good photos with Auto Mode. Thankfully, the C12 has a dedicated Night Mode that is able to capture pretty good low light shots. Sure, the C12’s night shots may not be to the level of flagship or mid-range phones, but they’re not bad at all for an entry-level device.

The C12 is also able to take macro photos thanks to its dedicated 2MP macro camera. The quality of macro shots are around the same level as the ones taken by other smartphones today in that images are of decent quality, but require lots of light to not turn out blurry or lacking in detail.

Even though, the C12 only has a 5MP front camera, selfie’s taken with the phone should be good enough for social media; the beautification is a bit on the aggressive side. Finally, the C12 is also able to take decent portrait photos with a nice blur effect. 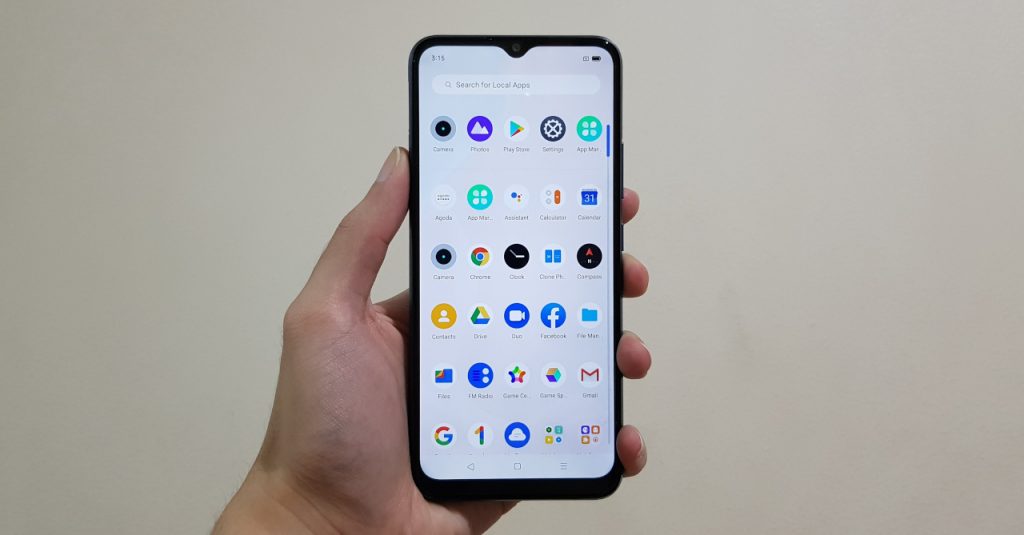 Thanks to the capable Helio G35 processor, the realme C12 is a great phone for day-to-day use. At no point in my time with the C12 did the phone slow down noticeable, whether I was going through menus or switching between apps.

While everyday performance is great, what stood out for me about the phone is that it has an incredibly long battery life. Thanks to the massive 6,000mAh battery, the realme C12 can last for up to two days on a single charge with medium to heavy use.

Because of the large battery and lack of fast charge support, the realme C12 charges slowly. The C12 is also thicker than your usual phone. Still, these are acceptable trade-offs given the phone’s incredible battery life. 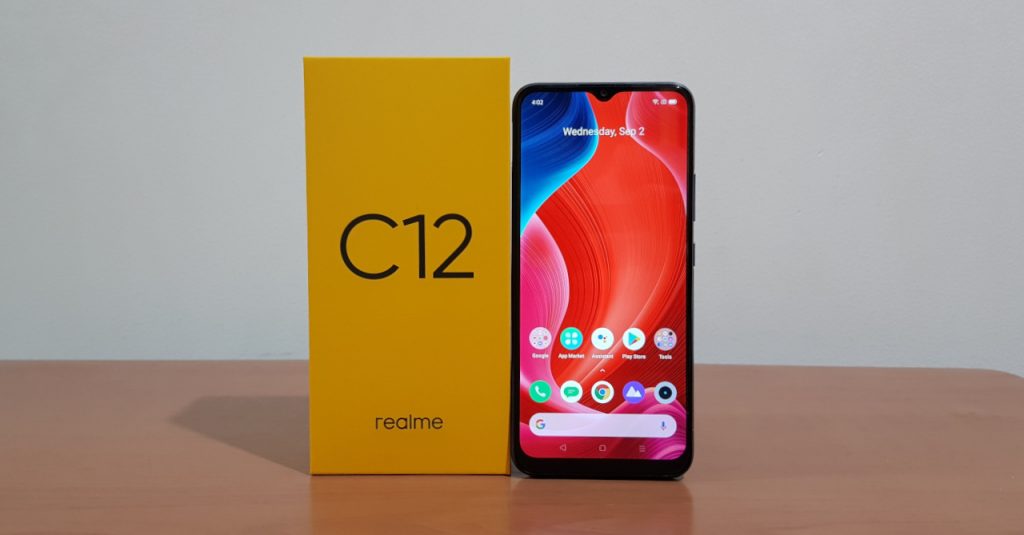 With a price of just PHP 5,990, the C12 is another great smartphone deal from realme thanks to its good cameras, great performance, and excellent battery life. The only reason not to get the C12 is that realme’s own C15 has a bit more features for just PHP 500 more.

If your budget caps out at PHP 6k though and you’re not willing to spend any higher, you definitely can’t go wrong with the realme C12!