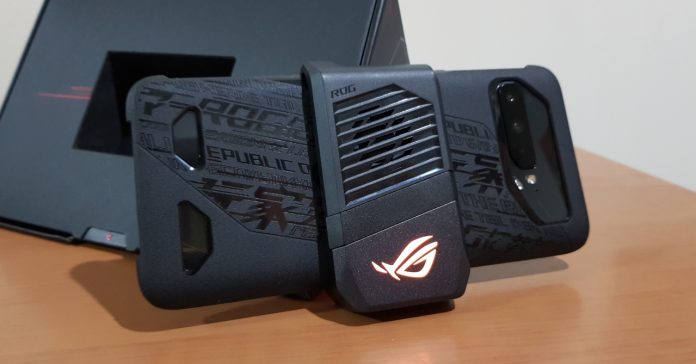 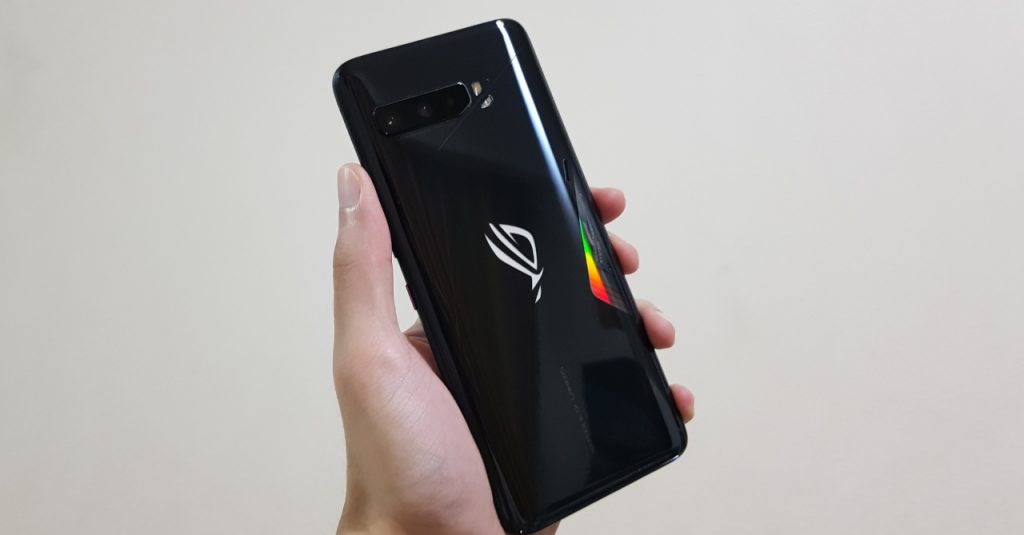 Aside from gaming features, the ROG Phone 3 also packs an improved camera setup as it now packs three rear cameras instead of two. To top it all off, the phone has a sleeker-looking design, all while still having a distinct “ROG” look.

Going purely by specs, the ROG Phone 3 is an impressive phone. Of course, a phone is more than just its specs sheet. So does the ROG Phone 3 live up to its promise of being the ultimate gaming smartphone? Find out here in our full review! 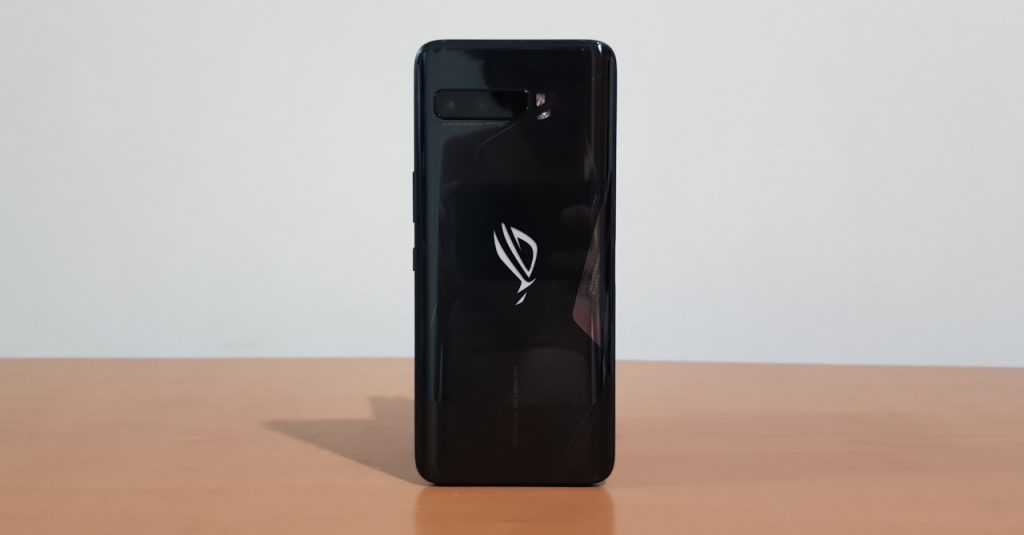 As I mentioned above, the ROG Phone 3 has a sleeker and more toned down look compared to its predecessor, the ROG Phone 2. Make no mistake though, the ROG Phone 3 is still an eye-catching phone when seen from the back, especially when ‘X Mode’ is on as this activates the RGB lighting on the ROG logo.

While it looks great, the ROG Phone 3 does feel a bit slippery for day-to-day use or for gaming. Thankfully, the phone comes with a slim case inside the box. This helps make the phone feel a bit more grippy, especially for marathon gaming sessions. 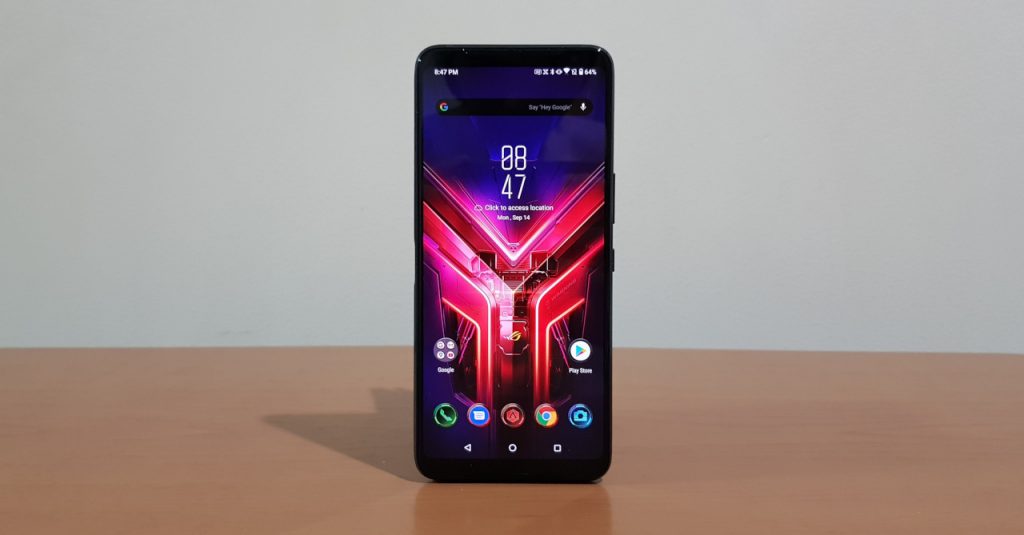 Moving to the front, you’ll see the ROG Phone 3’s massive 6.59-inch AMOLED display. From the front, the ROG Phone 3 looks almost identical to the ROG Phone 2 save for the lack of orange accents on the speaker grills. While this look may disappoint some users who want a more “all-screen” smartphone, I personally don’t mind the bit of bezel on the top and the bottom, especially because it makes for a nice, symmetrical look. Plus, it’s not like the bezels are wasted as the phone has two front-firing speakers (more on that in the next segment). 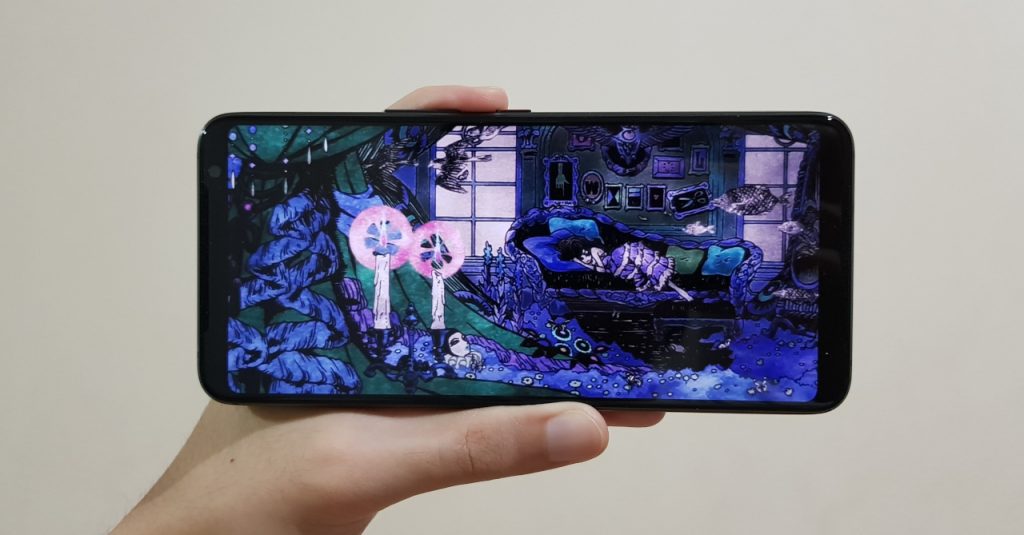 The ROG Phone 3 is an excellent partner for binge-watching movies, series, or anime. This is thanks in large part to the AMOLED panel which produces vibrant colors. While it’s not as “all-screen” as other flagships, my viewing experience did not suffer at all. Plus, the lack of a notch is a good thing for users who may get distracted when viewing movies/shows on phones with one.

If you’ve read my other smartphone reviews, at this point, you’re probably expecting me to say how the phone’s onboard audio is meh and how speakers/headphones are recommended. While I still recommend speakers or headphones for the best experience, the ROG Phone 3’s speakers are one of the best I’ve heard in its class!

As the phone packs two front-facing speakers, the phone produces a nice stereo effect, which is great for binge-watching and even music listening. To top it all off, the audio output gets decently loud all while still having pretty good quality.

Everything isn’t perfect in the audio department though as the ROG Phone 3 lacks a 3.5mm headphone jack. This means you’ll either have to use wireless headphones/speakers, or use the bundled Aeroactive Cooler which has a headphone jack.

Now we move on to gaming. Powered by a Snapdragon 865+ processor paired with 12GB of RAM (16GB for the highest end model), the ROG Phone 3 has more than enough power for pretty much any game available on Android right now. 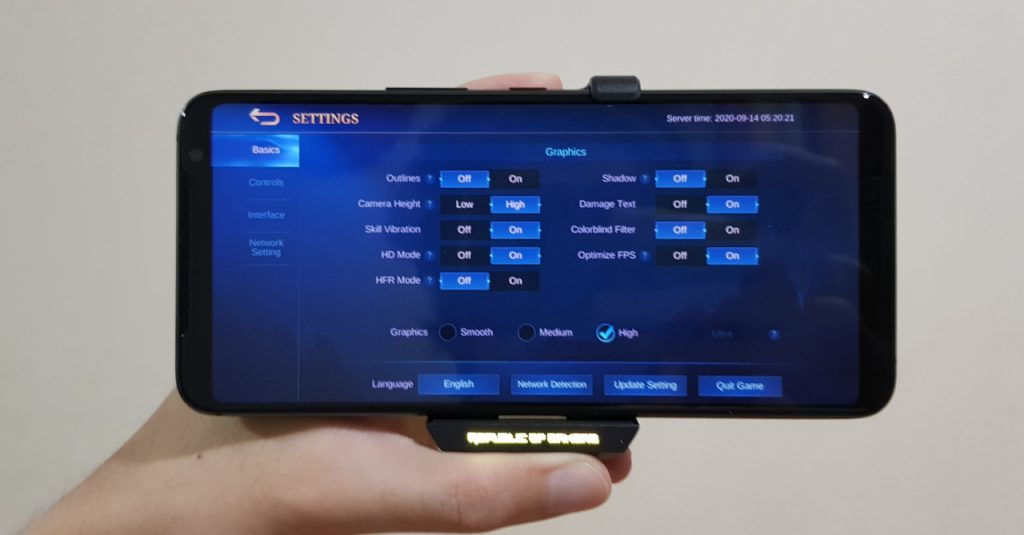 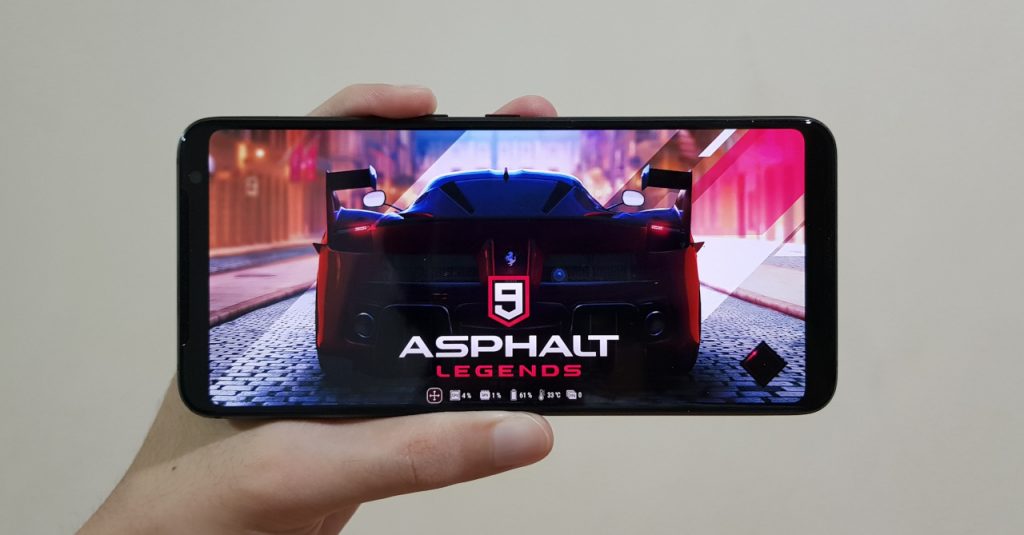 As for more demanding games such as Asphalt Legends or something like NBA 2K, the ROG Phone 3 did not struggle at all. In these games, the framerate was steady throughout, with no noticeable dips. 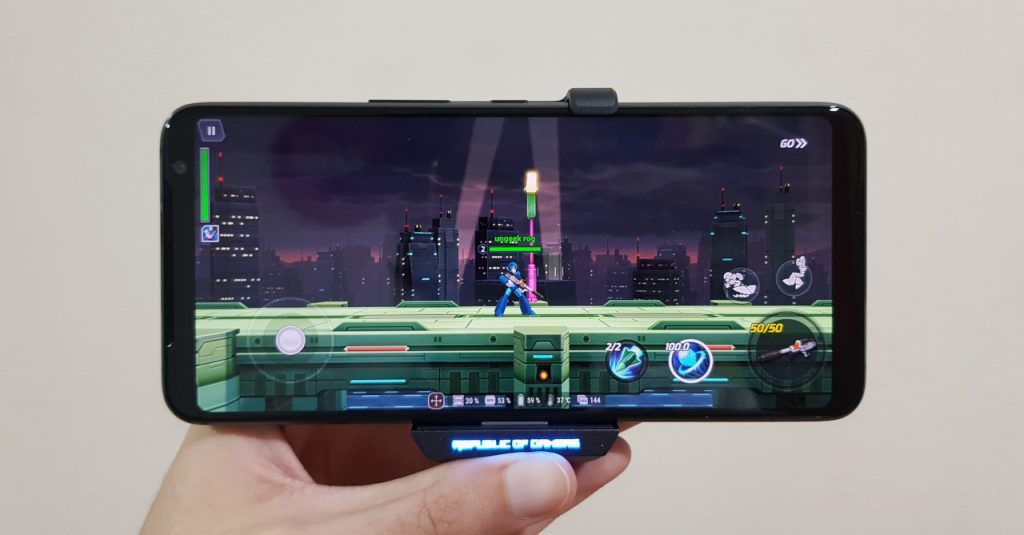 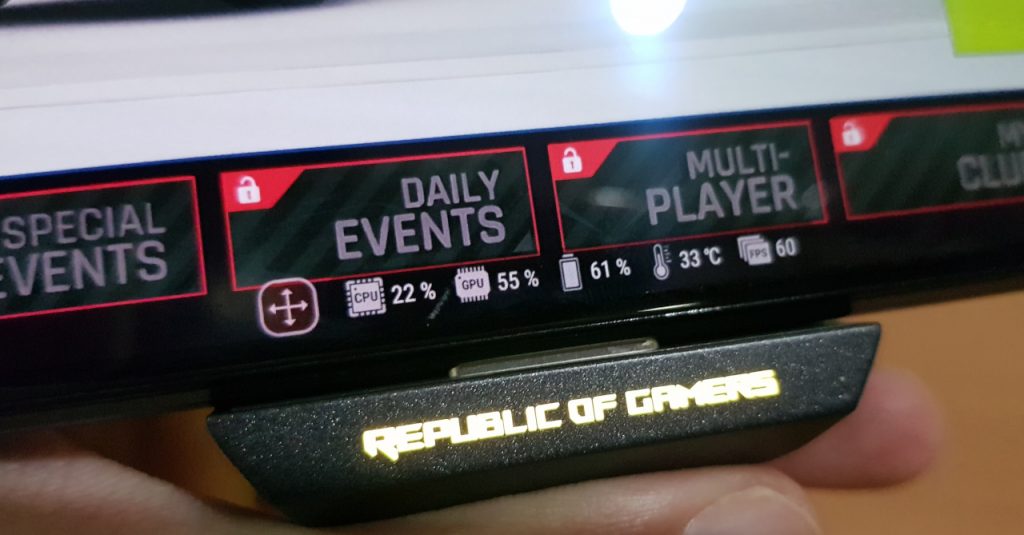 Similar to previous models, the ROG Phone 3 is bundled with an Aeroactive Cooler. This nifty device keeps the phone cool for long gaming sessions. The Cooler also has a 3.5mm headphone jack, a-must have for mobile gamers given the high latency of some wireless earphones.

The ROG Phone 3 features a triple camera setup consisting of a 64MP main, a 13MP ultra-wide, and a 5MP macro camera. At the front meanwhile is a 24MP selfie shooter.

The ROG Phone 3’s 64MP main shooter is able to take great quality photos in daytime. In these situations, images are bright and detailed with good colors.

At night, the phone’s default camera app automatically applies uses Night Mode if it detects that a user is shooting in low light. This is different from other phones that have dedicated night modes that must be selected manually.

The results of this Night Mode are pretty good, with low light photos having good colors and much better detail than standard shots. When compared to low light photos of other flagships in its price segment, the ROG Phone 3’s images are a bit of a step below.

The 5MP macro camera is a step above the typical 2MP macro shooter in other mid-range phones. Though you’ll still need a good amount of light to take quality macro shots with this camera.

Finally, the ROG Phone 3’s 24MP selfie shooter is able to take social media-ready selfies. While not best in class, the front camera should be good enough for most users. 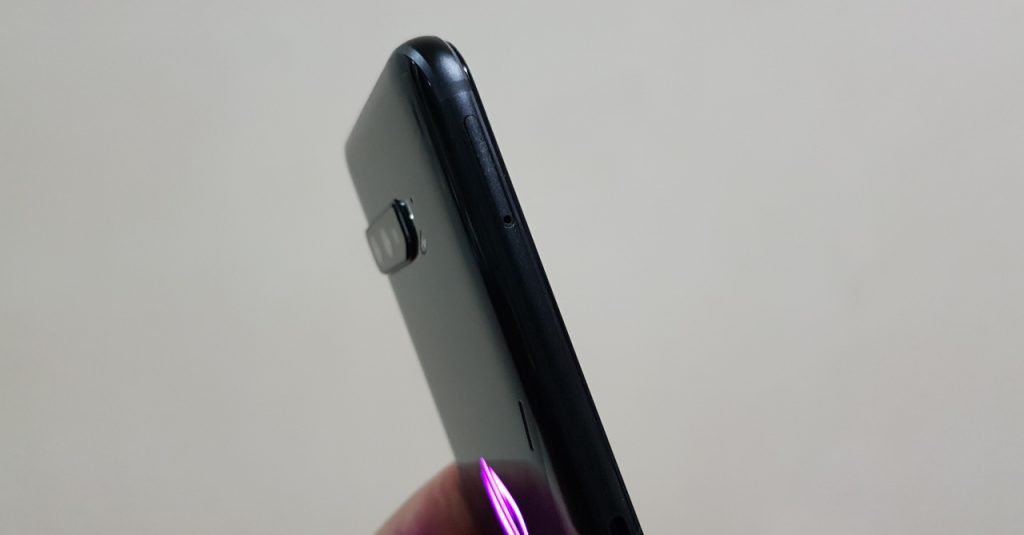 As the ROG Phone 3 proved to be powerful enough for practically any game you throw at it, the phone is also excellent for everyday use. At no point in my time with the ROG Phone 3 did it slow down or become choppy, even when switching between multiple apps. The 144Hz refresh rate of the display also helped make the phone feel snappy and responsive. Best of all, the ROG UI is pretty close to stock aside from its looks given the lack of pre-installed bloatware.

What impressed me even more with the phone though is its battery life. Even with its powerful performance, the phone won’t get drained in a flash thanks to its massive 6,000mAh battery. While it may not be the absolute best phone when it comes to battery life, it should easily last for more than one day, even with heavy use.

Another interesting thing about the ROG Phone 3 is that it has two USB Type-C ports–one on the bottom and one on the right side for ROG gaming accessories. Both ports can be used to charge the phone and transfer files. While it lacks a headphone jack, having two USB ports at least lets users charge the phone and use heapdhones/speakers via a dongle (or with the Aeroactive Cooler). 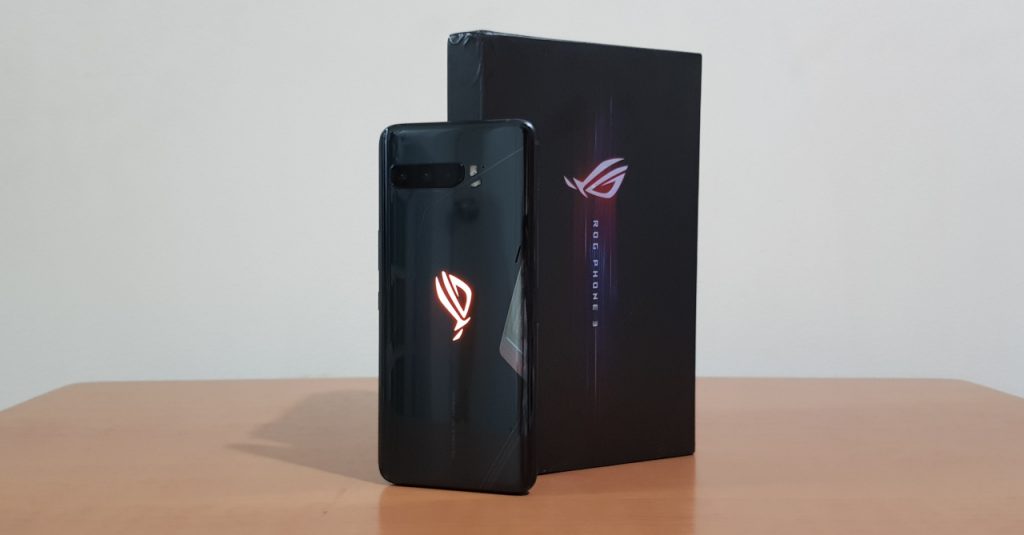 Overall, the ROG Phone 3 is one of the best, if not the best gaming smartphone you can get right now. This is thanks to its combination of a powerful processor, fast 144Hz display, and massive battery. Plus, the fact that it supports a wide range of gaming accessories makes it a must-have for the most serious of mobile gamers.

The only real issues with the ROG Phone 3 are its cameras that, while good, are not true flagship quality considering its starting price. Plus, the ROG Phone 3 isn’t exactly a big upgrade over last year’s ROG Phone 2. So if you’re a current ROG Phone owner, there aren’t a lot of reasons to make the switch.

But if you’re coming from a first-gen ROG Phone, or if you’re looking to get a high-end gaming phone, the ROG Phone 3 is definitely a good choice–if you’re willing to shell out big bucks for it that is.