A great return for the series! 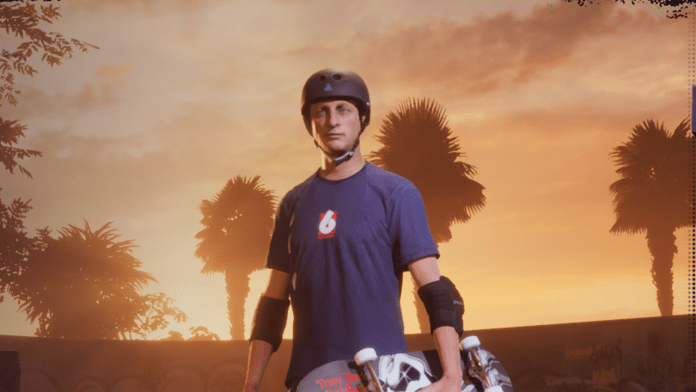 It’s hard to imagine that the original Tony Hawk games were released more than 20 years ago, and now we have a full remake of the classics! The Tony Hawk’s Pro Skater 1+2 Remake takes the core elements from the original games and updates them to eleven. The intro starts off with a 4:3 video, similar to the originals, then as you see Tony pulling of his famous “The 900” trick it transitions to a high definition video featuring pro-skaters both returning and new; this is a really good way to show what this remake is about.

Trying to pull off insanely long combos and hoping you don’t bail is very rewarding once you grow more comfortable with the trick system. When the game first starts, I highly recommend taking the tutorial. Tony himself narrates and guides you through most of the basics that you will be needing in the game. The trick system feels more like that of THPS 3 and brings some of the newer features into this remake. These include “reverts” or “transfers” to name a few, which helps in pulling off those longer combos, greater point potentials and making movement through the levels smoother.

If you want to customize your tricks even further, you can map almost all of the tricks. I prefer using ramps or vert tricks, so I try get as much air as possible for triple heel flips or 360 melons. It wouldn’t be a Tony Hawk game without the signature tricks performed by the pro-skaters. Once you fill up the Special meter, you can perform these special tricks, like Tony’s “the 900”, and your skater performs better, which is great for building up to a high score. 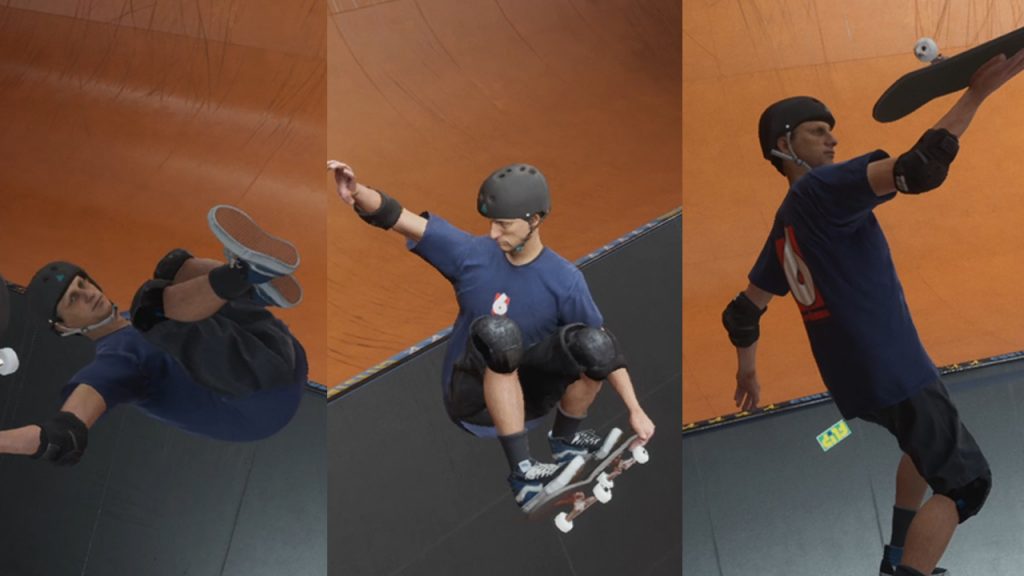 Splitting the 2 games into its own separate tour is a smart move, It allows fans or newcomers the option to start with either tour and freely switch at any time. I had more experience with the second THPS game, so I chose the second tour as a start. The third tour is called Ranked & Free Skate. Ranked Skate is where you compete in Single Session or Speed Run High Score modes in a Global leaderboard. On the other hand, you can choose Free Skate if you’re just looking for a fun session. While you do have access to all the stages, you won’t be able to complete stage goals or collect Stat Points.

Speaking of Stat Points, you can upgrade your chosen skater, whether it be a pro or your own custom-made skater, by collecting Stat points that are scattered throughout the levels. Like the originals, you can upgrade various stats to fit your play style. Eventually, you do get enough stat points to max out all stats. 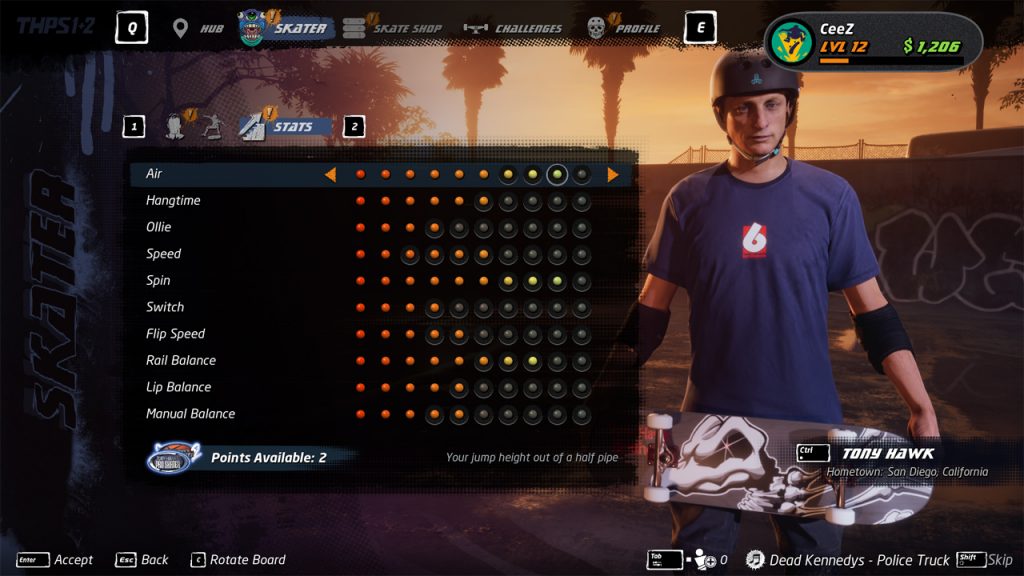 While the stages remain the same in terms of the map layout and size, the updated textures and details to give them a whole new feel. The Mall level is probably the best example, as it has a more abandoned or even apocalyptic look rather than the original which just looked like any other mall after closing hours. Draw distances have also been improved, as you can see background elements far outreaching the stages’ boundaries. So, you won’t be seeing the fog from the original games. 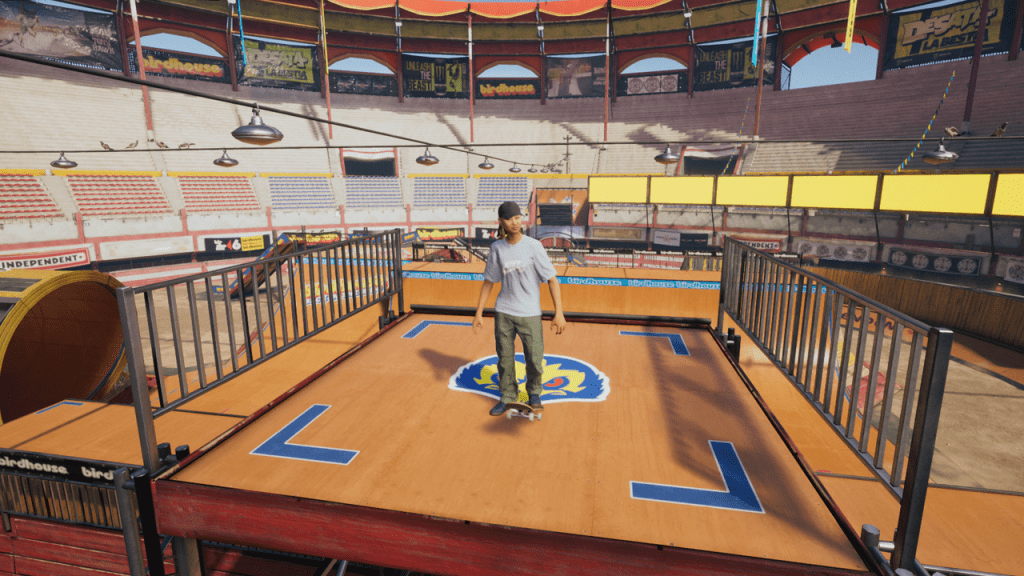 Even just exploring the map feels like a treasure hunt.  Looking for secrets or collecting the S-K-A-T-E and Tapes or crashing through boxes or jumping over hidden gaps and other such goals gives you satisfying progression rewards. Completing these goals unlock the next map, where you can do it all over again. Which is not a bad thing, as each map has a unique feel and layout that makes you want to complete all the goals before moving on and to do one more run. Each session in 2 minute chunks at a time, though most of the time you will be instinctively be reaching for the pause button to restart the session because you think that you can do better or collect everything faster. Before you now it, an hour has passed before you even finished one session.

Though with a game that looks this good and performances from players that just leave you in awe, it’s a pity that there is no Photo mode or Video editor, as this was done for Tony Hawks Proving Grounds. It would have been great to save those runs and view them from a different perspective. 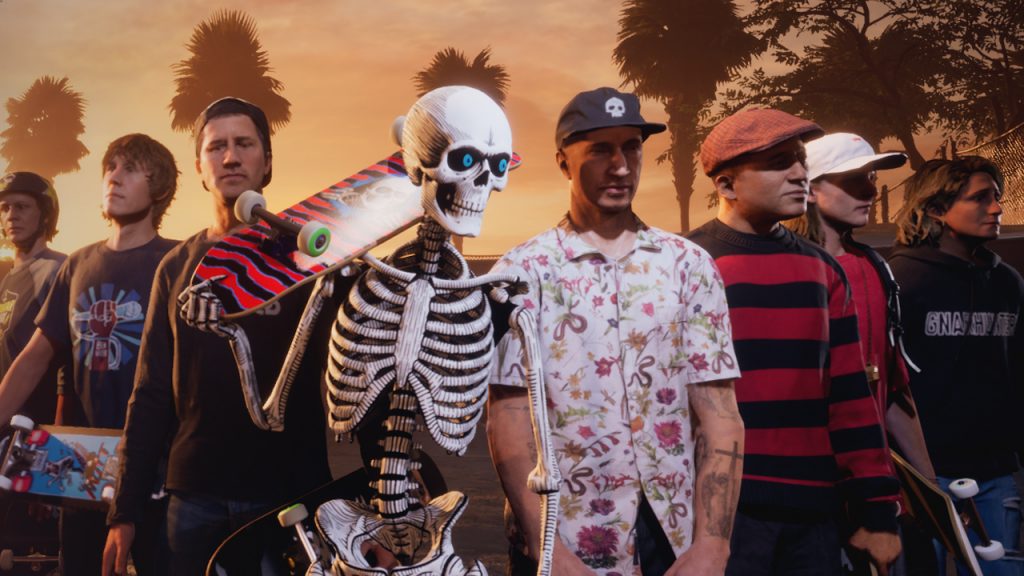 The skaters look very much like their real-life counterparts though they have limited visual customization with their boards and gear. You can definitely tell the returning pro skaters have aged somewhat. If you would like a more personal touch, you can also create your own skater. You can customize your board, gear and appearance with more options being unlocked as you complete more challenges.

Up for a Challenge

There are more than 700 different challenges. Example, each skater has their own list of challenges which can be as simple as performing a Flip combo or earning a gold medal in a competition. Completing Challenges earn you cosmetics for your skater, experience for your account level and some cash you can use in the skate shop. As your account level increases, more cosmetics will unlock in the skate shop. With the in-game money you earn, you can choose from a vast array of boards, apparel, tattoos and logos. This is refreshing since they could have easily tied progression to a season pass to further monetize the game. 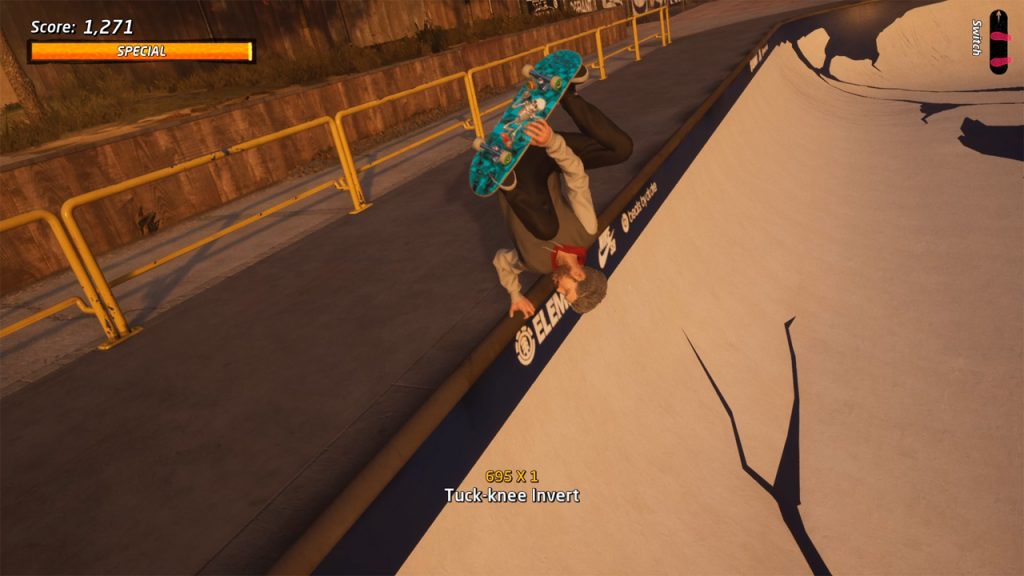 Multiplayer in Tony Hawk’s Pro Skater 1+2 can be played locally in split screen or online. You can run casual sessions with Jam or run Competitive to prove your worth against your peers. Multiplayer game modes from the original do make a return like Graffiti. In this mode, you compete with other players to mark parts of the map. To do this, the player with the highest trick combo or score in that section of a level will be given a point. The goal is to get the most marks on the level. Vert ramps, rails, staircases, roofs and anything you can perform a trick on can be marked. Like regular sessions, most rounds will last a couple of minutes before transitioning to a different level or mode. Other game modes include: Trick Attack, Score Challenge, Combo Mambo, Combo Challenge, Tag and, a fan favorite, HORSE. 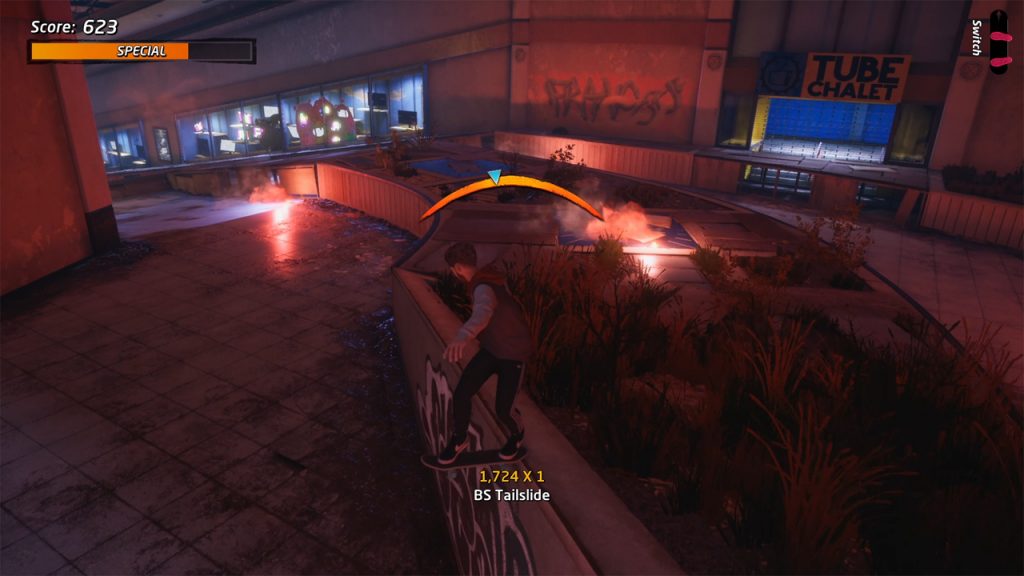 Split screen played smoothly with no noticeable frame drops. Online play may vary. Most sessions didn’t have any problems, however, there was the rare occurrence of lag but even that is barely noticeable.

Another returning feature is the Create-A-Park editor. You can create your own courses, using most of the in-game assets, the editor itself is very easy to use and you can test run the park at any time with a push of a button. Then, if you feel satisfied with your creation and wish to share it with the rest of the world, upload your park online and, who knows, it may be added to the Featured list. There are already a number of customized parks to browse through. There’s one that looks like a roller coaster and you just grind rail through the entire course.

OST was and is still Great!

Another thing the THPS game have been known for are their great soundtracks. In the remake, the soundtrack is mostly intact. Guerrilla Radio by Rage against the machine and Superman by Goldfinger take center stage as the music for the main intro cinematic and the start screen respectively, which were my personal favorites from the 2nd game. While it is noted there are a few missing tracks (like maybe 3) new tracks were added to update the list. These gel well with today’s skater culture. Though, some veteran players may just remove these new tracks from their playlist anyways. 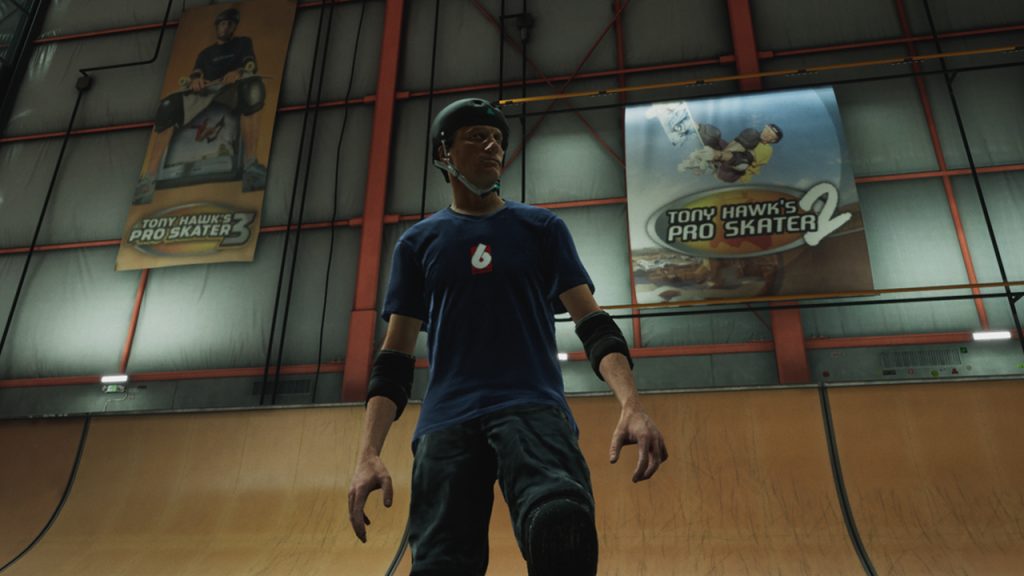 Another thing, if your in the groove while listening to the track, but your character bails, the music volume will change to reflect that. It would be nice if there was an option to keep the music consistent.

Tony Hawk’s Pro Skater 1+2 is a great package that the developers, Vicarious Visions, beautifully balances some of the original elements with modern quality of life enhancements that makes the game a thrilling experience to play. Considering that Tony Hawk’s Pro Skater 2 is one of the most highly rated games of all time and the last game in the series–Tony Hawk’s Pro Skater 5–was not well received by the majority of the player base, the developers had to tread carefully on how they would handle this remake. While the lack of a photo mode or video editor is a disappointment, it’s just a personal nitpick and doesn’t ruin the experience.

The trick system will be familiar to returning players while being easy to pick up for newcomers. You always feel the need for one more run and the desire to reach even higher scores while listening to your favourite THPS soundtrack in stages that retain their fantastic level design with improved visuals. Overall, Tony Hawk’s Pro Skater 1+2 is a great recommendation for skaters, gamers and all those in-between, as this will keep you entertained for hours on end.

Tony Hawk's Pro Skater 1 + 2 Review | An Old Game Learning Flashy New TricksA great game for veterans and newcomers with tons of content enjoyment to be had. This remake brings the series to modern systems with stylish tricks, updated visuals, great soundtrack and more.