Best settings to try out for League of Legends: Wild Rift

Optimize your gameplay before heading out to the Rift! 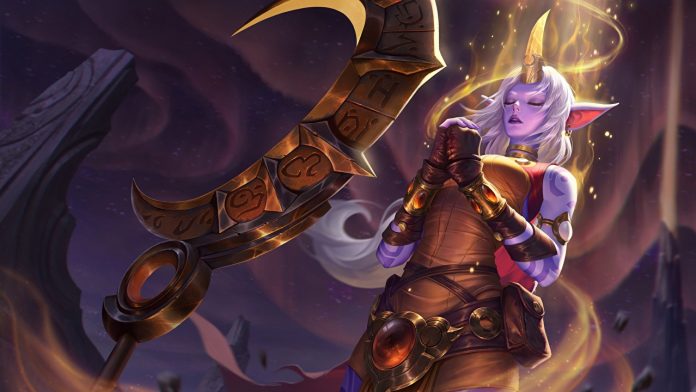 League of Legends: Wild Rift open beta has just been released and by the time of this post, everyone now has access to this much-anticipated moba by Riot Games. If you are still on the fence or are curious on how this stacks with previous outings such as Mobile Legends: Bang Bang or the original PC League of Legends, we got you covered here. Some quality-of-life improvements were made since alpha but for this article we’ll be covering some of the basic settings you can apply for an even better gameplay experience.

To streamline this tab, a lot of preset options are available beside “Graphics Quality” For mid-range phones or if your games has some noticeable lag you would want to select either “Performance” or “Balance”. Even with the slight sacrifice in graphics, personally the game still looks great despite what you might expect. So don’t worry about the game looking not up to par with the best phones. The game is still eye-candy to play regardless.

For the latest, high-end phones or devices suitable for gaming, you might want to up your FPS to 60 for a much smoother experience. This might eat up a lot of your battery life but for those who can utilize this, I suggest doing so. 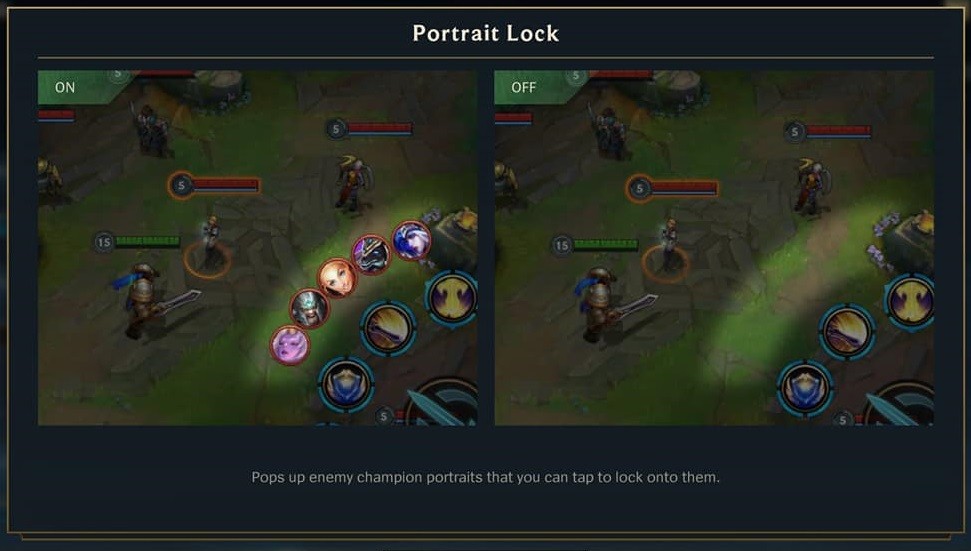 Portrait Lock – Turning this on proved to be a godsend for me especially in clashes where a lot of things are happening at the same time. By activating portrait lock, you can specify an enemy hero to focus on. This will be especially handy if you want to target a marksman or carry first during fights. Another bonus feature here is that it can also serve as an indicator which particular enemy hero is within your range. This might take some time to get used to at first but in the long-run, Portrait-Lock is certainly one of the best things to consider learning in the game.

Targeting Priority – This can be subjective but for me I prioritized Low Health over Distance. Just to pick-off those pesky carries first. 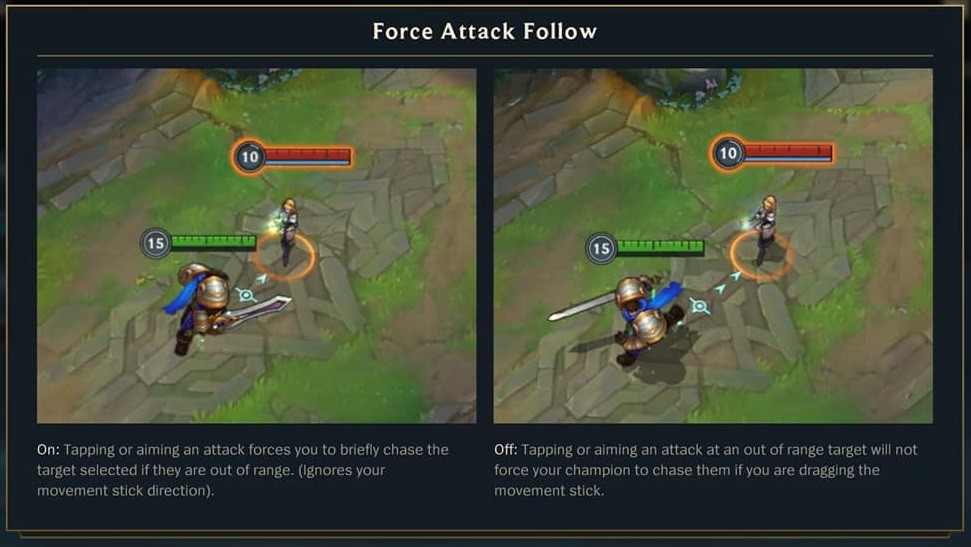 Force Attack Follow – I would suggest turning this off just to allow total movement of your champion. 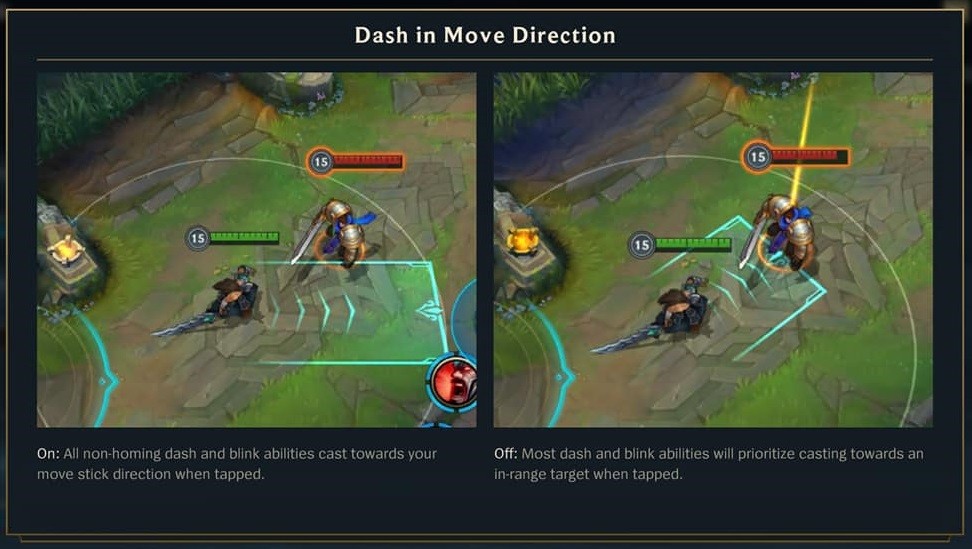 Dash In Move Direction – This can also be based on preference but for me I turned this on. For those who use the dash/blink or a champion skill that makes you move forward, by turning this on you can just tap the designated spell/skill to make your hero move in the direction you are facing. This is ideal for quicker escapes because a fraction of a second is spent on aiming the stick on where you want to dash, so turning this on can scratch off a few microseconds, allowing you to advance or retreat just a bit faster.

The 3 Camera options you should consider enabling. 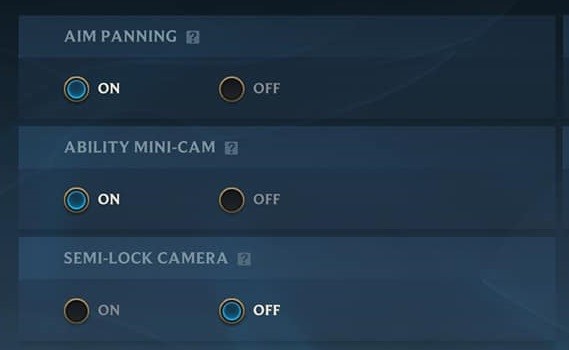 I did not notice this at first during the Alpha test but I’m glad its here now. 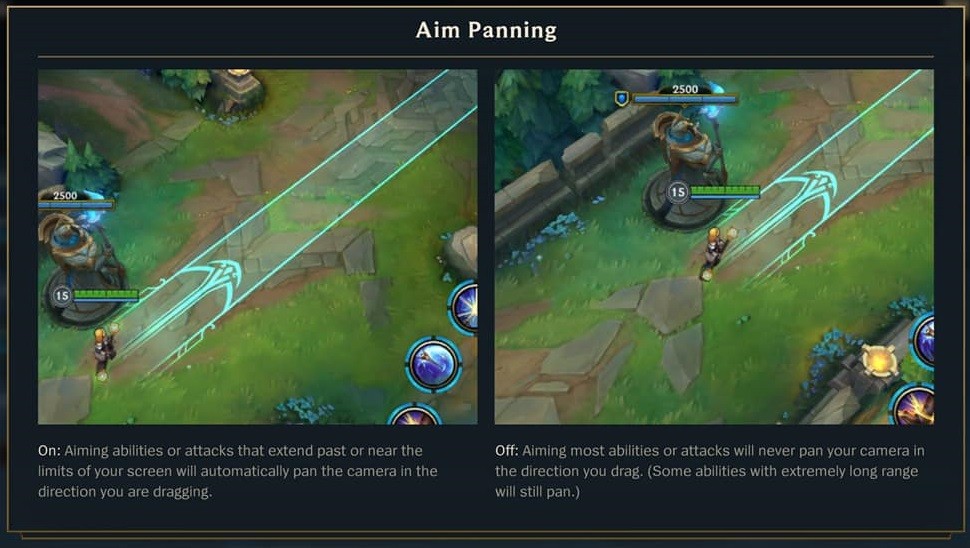 Aim Panning – For heroes with long-range skills, this lets you zoom-out your view for targets that are usually off your screen. Perfect for landing that Jinx rocket or sending that Lux beam to an enemy. 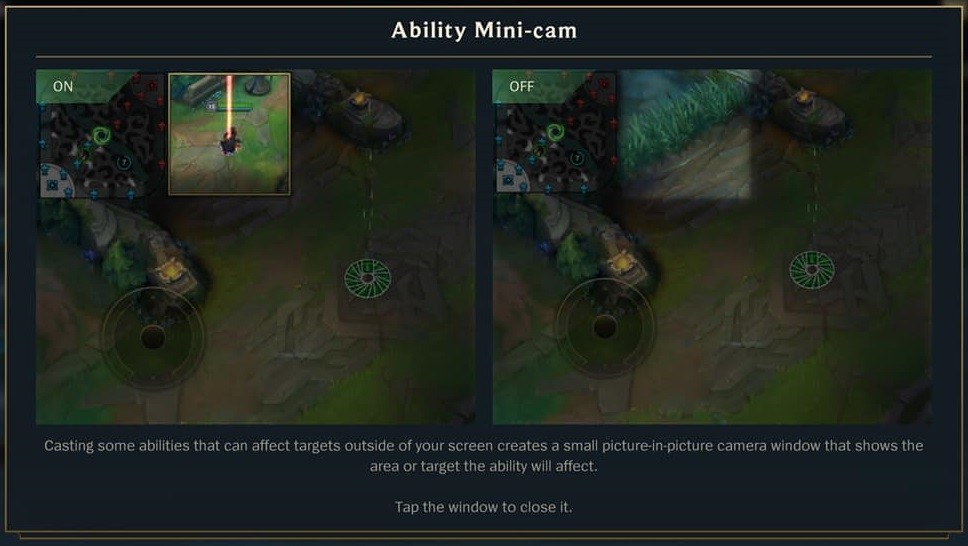 Ability Mini-Cam – For skills that linger on the map even when your hero is not in the area, this feature adds another view in the upper-left portion of the map, allowing you to see out-of-reach for triggering your skill at the right time and say “you just activated my trap card!”. 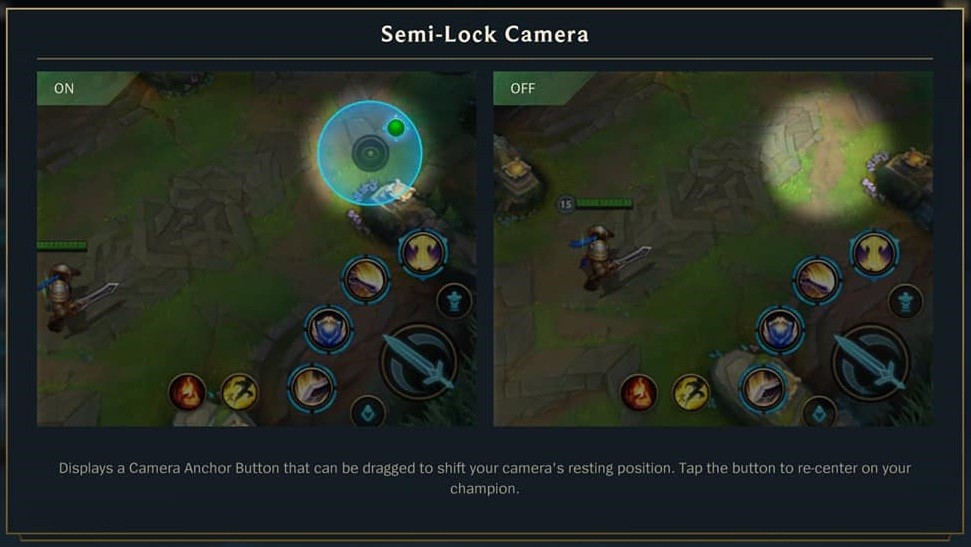 Semi-Lock Camera – By default, your champion is fixed at the center of the screen but by turning this on, you can change the “resting position” of the camera. This is ideal for long-hitters if you want to get a better view of what’s ahead or behind you. You can easily revert back to center by pressing the camera’s designated button on the top-right of the screen. Personally I turned this off but would like to try out the feature in my next matches.

Ever experienced pressing the wrong skill at the wrong time because of big thumbs? With Customize Button Layout, you can specifically assign location on just about any button or in-game interface during gameplay. 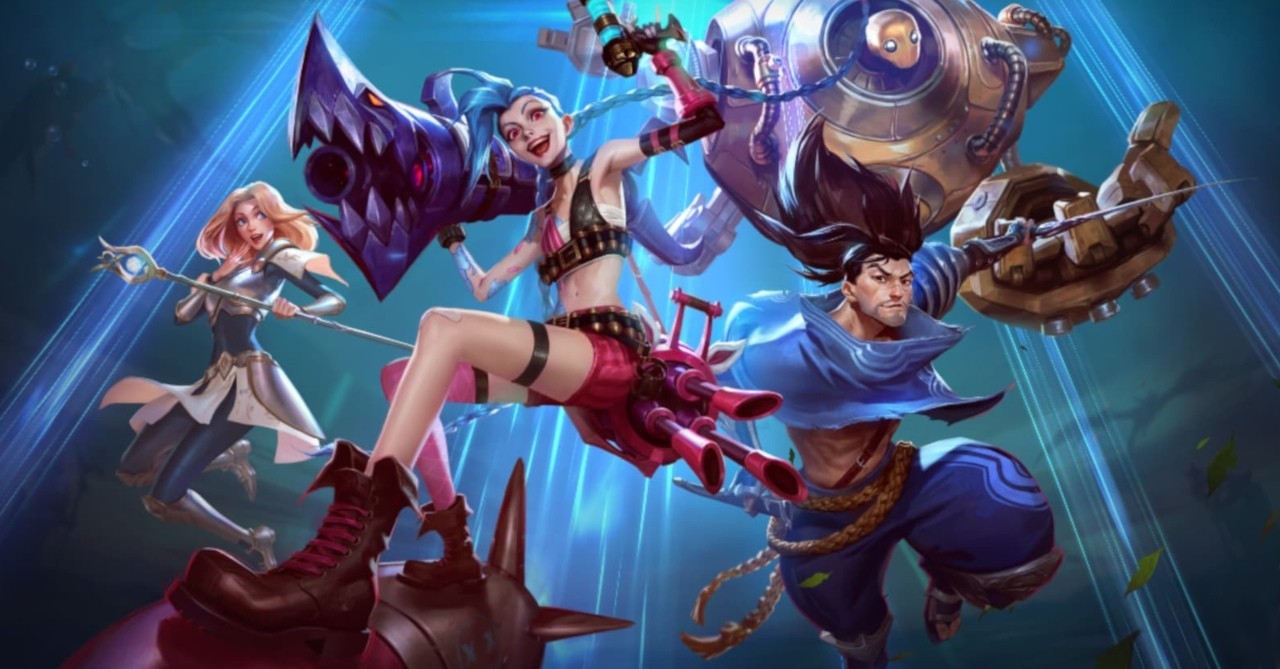 These are some of the basic suggestions you shold consider and, in the end, experience will still vary on player preference and a lot of game time trial and errors. I hope this helps you out and until next time, see you at the Rift!

League of Legends: Wild Rift is now available for free on open beta for Android and ios devices.

Related: Wild Rift: How it compares to LoL and Mobile Legends