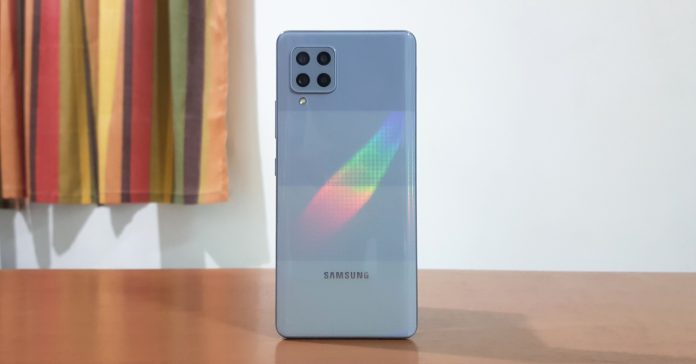 This year, Samsung has released a wide range of premium mid-range devices, including the likes of the A71 and the M51. While the aforementioned phones are great devices with quality displays and great cameras, Samsung’s other mid-range smartphones are not 5G-ready; this feature is reserved only for Samsung flagships, until now that is.

Recently, Samsung released the Galaxy A42, a new A-series device that’s available only via Globe and Smart postpaid plans. What makes this new mid-range smartphone from Samsung special is that it features 5G capabilities. 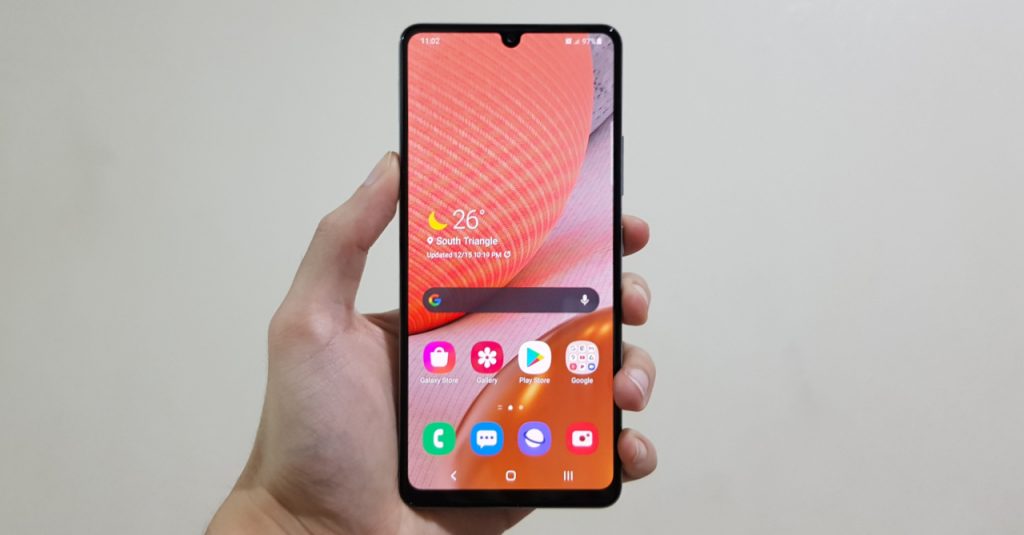 Aside from 5G, the Galaxy A42 also comes with other flagship-level features, including an in-display fingerprint scanner, as well as an AMOLED display. Make no mistake though, the A42 is not a flagship-killer as its display only has a 720p resolution, not to mention that it only has 4GB of RAM.

Given its mix of high-end and mid-range features, does the Galaxy A42 offer enough to make it a worthy smartphone option? Find out here in our full review! 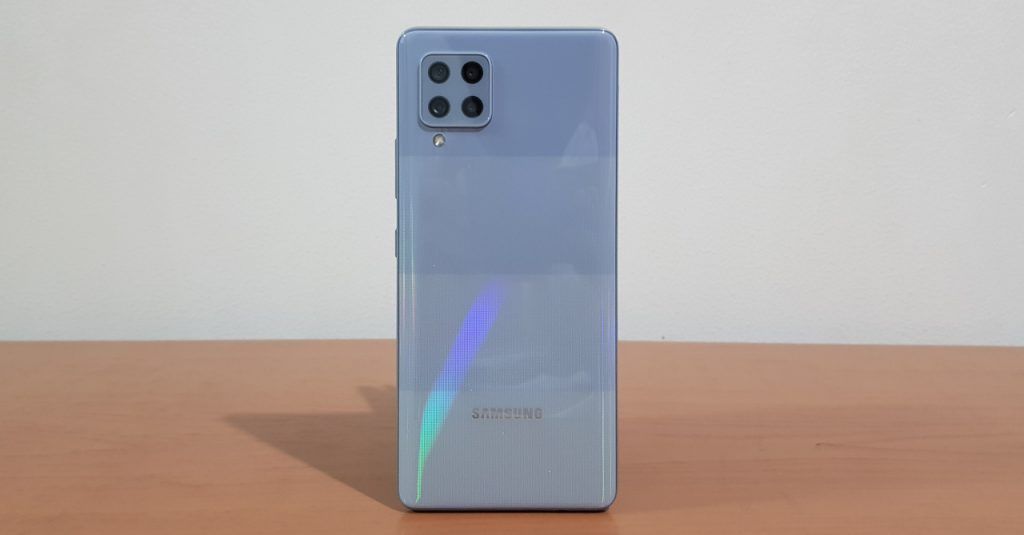 In terms of looks, the Galaxy A42 is styled a bit differently over the A71 and the M51. While Samsung’s other mid-rangers have camera modules that look like the higher-end S20 series, the A42 has a square quad camera module that doesn’t look as premium. Still though, the A42 is a good-looking smartphone when viewed from the back thanks to its unique patterned design and glossy finish. 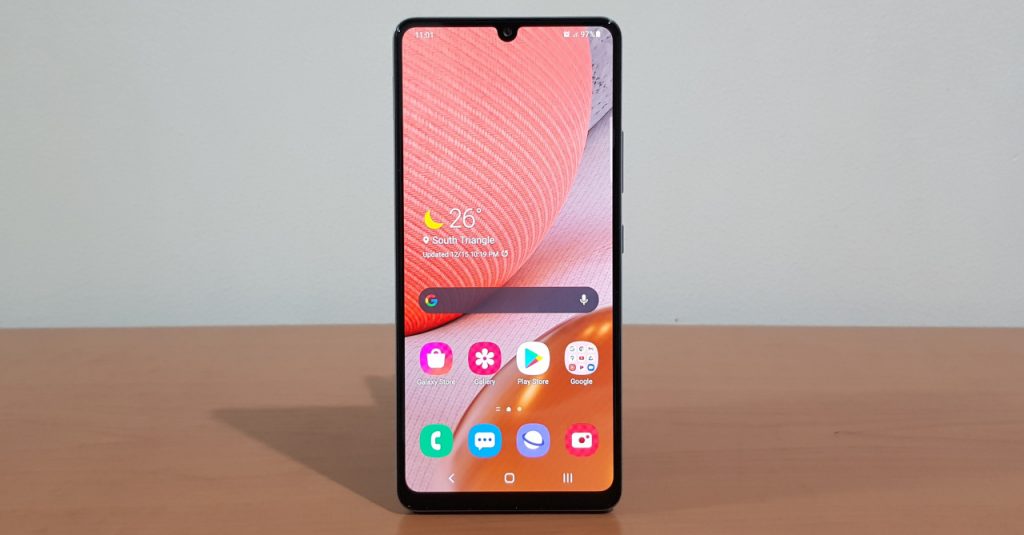 From the front, the Galaxy A42 looks fairly modern, but again, it won’t be mistaken for a flagship device given its notch and noticeable chin. For comparison, higher-end Samsung Galaxy phones come with holepunch notches that make for a more all-screen look.

Still though, the A42 is still a nice-looking phone; while it’s not the most premium, the A42 does not look cheap at all. Plus, the phone feels nice in the hand, though it is a bit on the slippery side. 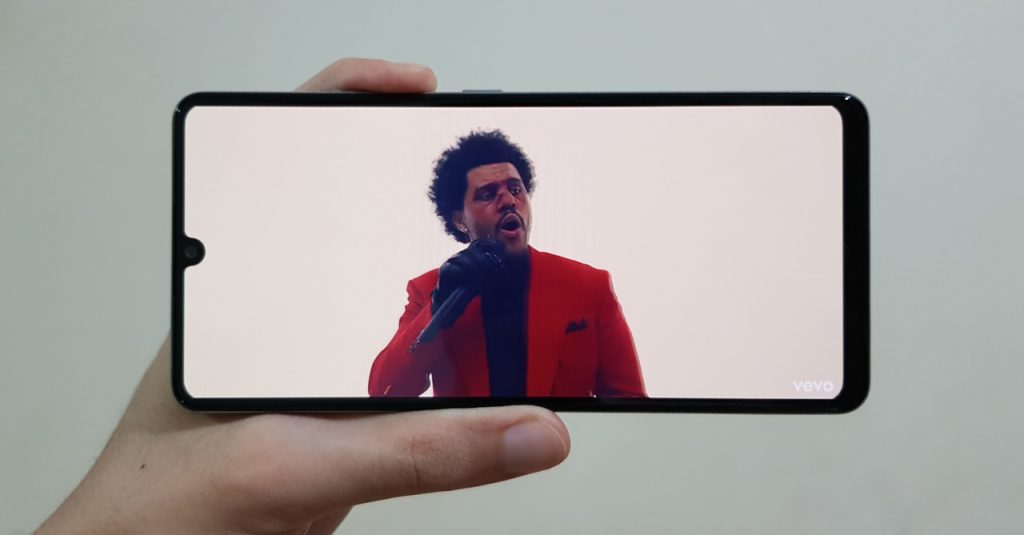 The Galaxy A42 comes packed with a 6.6-inch AMOLED display with a 720 x 1600 resolution. Given that the A42’s screen does not have a full HD resolution, the phone is not the sharpest for movie/series viewing. But on the flip-side, the A42 does have an AMOLED screen, meaning it produces vibrant colors. On the whole, what the A42 lacks in resolution, it makes up for in eye-catching colors, making for a nice binge-watching experience.

As for audio, the Galaxy A42 has a single bottom-firing speaker which gets decently loud and has good enough quality audio. For casual video-viewing, the speaker does an okay job, but for the best experience, headphones/external speakers are recommended. Users can connect an external audio device using the phone’s headphone jack, or wirelessly via Bluetooth.

The Samsung Galaxy A42 is powered by a Snapdragon 750G processor with an Adreno 619 GPU. While this processor should have enough power to run most of today’s games, the A42 only has 4GB of RAM. So how does the A42 perform with this setup? Well, it runs most games fine, though it does run into some trouble for the most demanding Android titles. 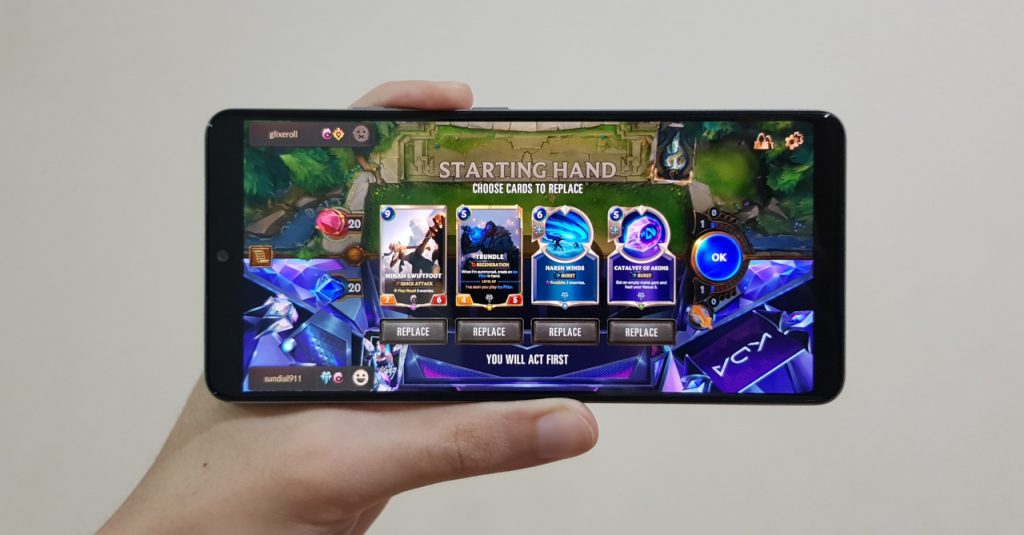 For less-demanding titles such as Legends of Runeterra, the Galaxy A42 has more than enough power to run them at max settings. Meanwhile, games like League of Legends: Wild Rift can run smoothly as well, just not at max. For instance, Wild Rift defaults at the High Definition setting, the second-highest preset in the game. 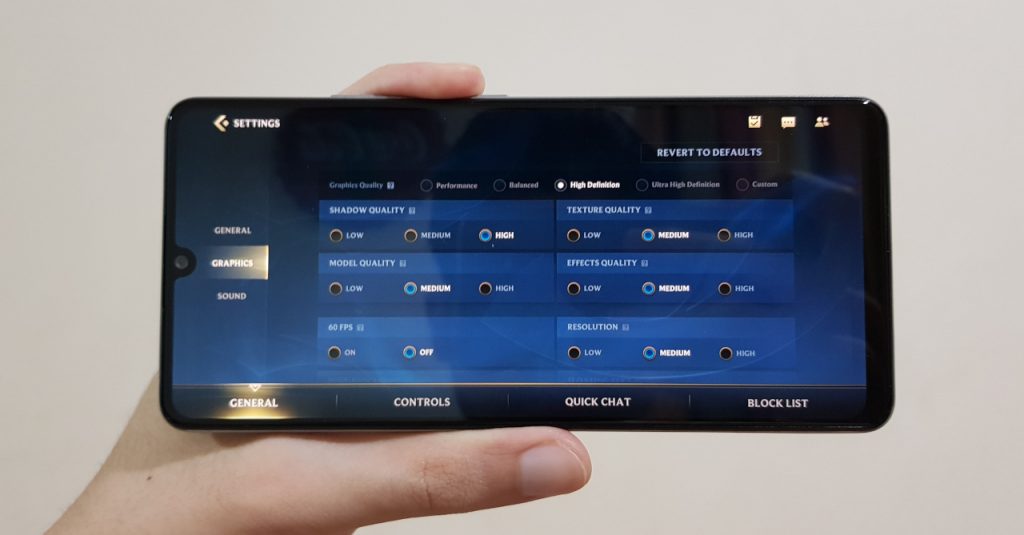 As for hardware-intensive titles, the Galaxy A42 can run into some trouble. For example, Genshin Impact defaults at the Low graphics setting on the A42. But in acutal gameplay, you’ll have to drop the settings to the lowest for a playable framerate. This is likely due to the fact that the A42 only has 4GB of RAM.

The main camera of the A42 is able to take quality photos, especially in daytime (even in overcast conditions). When there’s plenty of light, the A42’s 42MP shooter produces quality photos with a good amount of detail.

While quality suffers a bit when taking nighttime photos, the A42 has a nifty Night Mode that produces low light photos with more detail and better colors.

Moving on to the ultra-wide, this 8MP camera is able to take decent shots in daytime, but low light performance is usable, but not the best. Unlike the main camera, the ultra-wide shooter can’t be used with the phone’s Night Mode.

Up next, we have the 5MP macro camera. Compared to other mid-rangers with 2MP macro shooters, the A42’s camera is much better. Though you need to have a good amount of light to produce good macro images.

Finally, the A42 is able to capture social media-ready selfies with its 20MP front camera. Take note though, the beautification feature is on by default, and it can be quite unnatural for some. 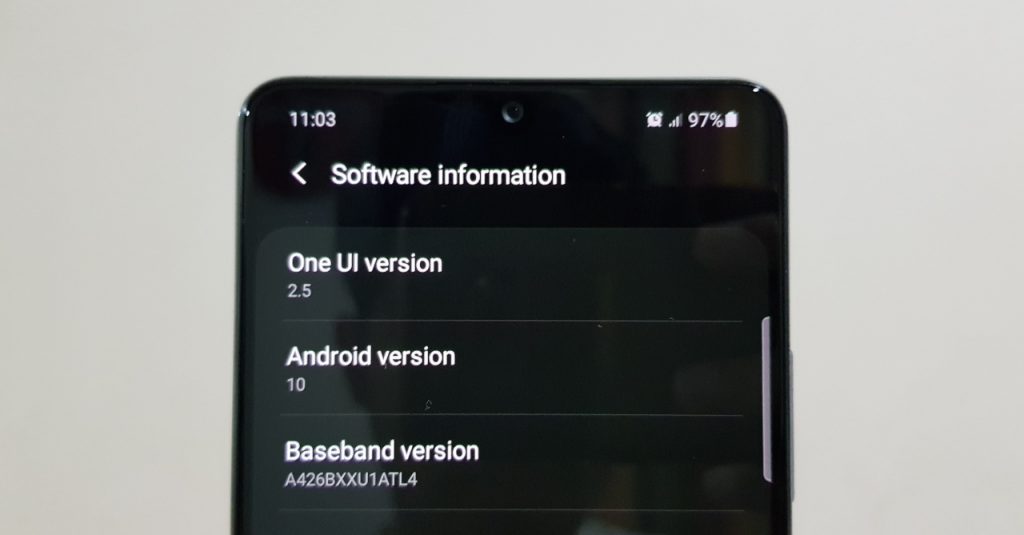 While the A42’s 4GB of RAM may not be enough for heavy mobile games, the phone’s internals provide more than enough power to run everyday apps with ease. In my time with the phone, it barely slowed down, whether I was using it to browse social media, or to use office applications.

Another great thing about the A42 is its 5G capability. Thanks to its Snapdragon 750G processor, users of the A42 are able to enjoy fast internet speed with incredibly low latency when a 5G network is available. Good thing that Philippine telecom companies have begun rolling out 5G in more and more places in the country. With this, getting a 5G phone is increasingly becoming a great deal.

For connectivity, the A42 has a USB Type-C port, as well as a headphone jack (always a plus). The A42 is also secured by an in-display fingerprint scanner that’s fast and responsive.

Finally, the A42 has a large 5,000mAh battery. Thanks to this, the A42 is able to last for two days on a single charge with medium use. Even when used heavily, the A42 should easily last for a day on one charge. And if it does need charging, the phone supports 15W fast charging. While not the fastest, it at least charges the phone to full in around 2 hours. 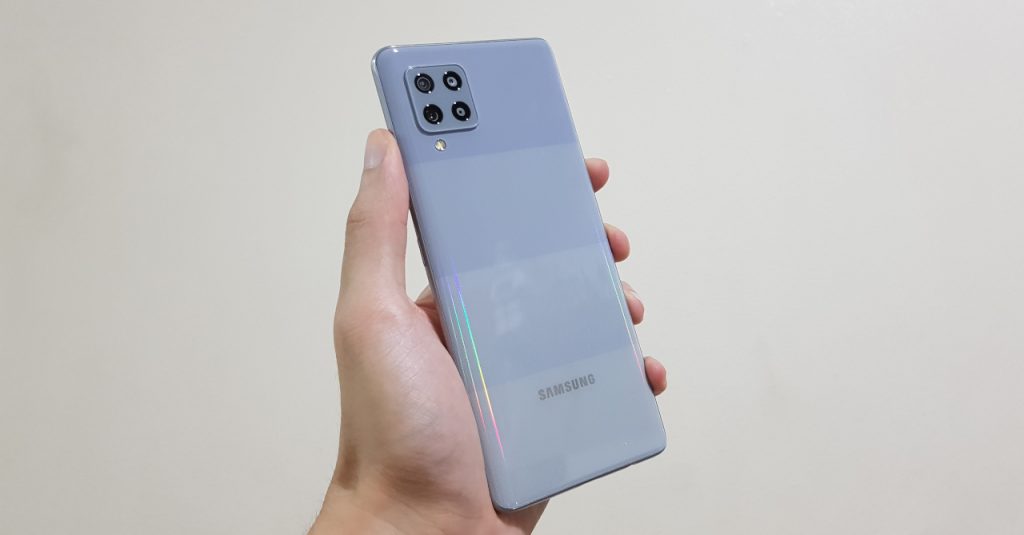 With its great design, capable cameras, and good performance, the Samsung Galaxy A42 is a nice mid-range smartphone option. Though what truly makes it an option worth considering is the fact that it supports 5G connectivity, making it one of the few 5G-ready phones that won’t break the bank.

Sure, the A42 only has a 720p screen, and it may struggle with the most demanding games out there, but overall, the Galaxy A42 is well worth considering.