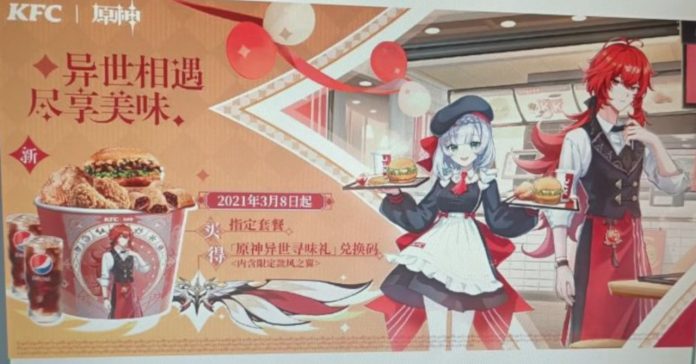 KFC is no stranger to gaming collabs. Not only did KFC reveal an actual gaming console, the fast food chain even had an Animal Crossing promotion in the Philippines. And now, it seems that KFC is back with another collab, this time with the hit gacha game, Genshin Impact.

The Genshin Impact x KFC collaboration was revealed online via a Tweet which showed a promotional image of the collab featuring Diluc and Noelle, both of which are in butler and maid outfits respectively. The image also shows a KFC bucket deal which features Diluc in his special KFC outfit.

While several publications have already reported on the collab, there’s no official announcement yet from KFC China or MiHoYo. Though according to some reddit users, there might be some KFC-themed Gliders that will be given away during the promotion. Of course, take this with a grain of salt until an official announcement.

If confirmed, a KFC and Genshin Impact collaboration shouldn’t be a surprise. After all, KFC has already had previous promos with other mobile titles such as Arknights and Girls Frontline.

In related news, Xiaomi has teamed up with MiHoYo for a Mi 11 x Genshin Impact partnership.